Bradley Allen Fiske was born in Lyons, New York, on 13 June 1854 to Rev. William A. and Susan (Bradley) Fiske. Despite spending much of his youth in New York, he later moved with his family to Ohio. It was from that state that he was appointed to the U.S. Naval Academy in 1870. He graduated from the Academy in 1874 and received his commission as an ensign in July 1875.

During his first assignments he served as an officer on board the steam sloops-of-war Pensacola and Plymouth, in the Pacific; and later the paddle steamer Powhatan in the Atlantic. He promoted to the rank of master in 1881 and the following year in 1882, he married Mrs. Josephine (Harper) Fiske, a union that produced a daughter, Caroline Harper Fiske, in 1885.

Fiske had training ship duty on the sloop-of-war Saratoga and the wooden steam frigate Minnesota. He served on board the steam sloop Brooklyn until being assigned to the Bureau of Ordnance in Washington D.C., in 1886. Fiske was promoted to the rank of lieutenant in 1887. He remained in his position with the Bureau of Ordnance until 1888 supervising the installation of weaponry on the protected cruiser Atlanta, one of the Navy’s first modern steel warships. From 1888 to 1890 he participated in the trials of the experimental dynamite gun cruiser Vesuvius and was later put directly in charge of installing electric lighting in the recently commissioned protected cruiser Philadelphia (Cruiser No. 4). It was during this period that Fiske continued to hone his skills as a naval inventor producing numerous innovations in electrical and gun-control systems.

Fiske remained heavily involved with the Bureau of Ordnance, serving in the protected cruiser San Francisco (Cruiser No. 5), as well as Yorktown (Gunboat No. 1), and Petrel (Gunboat No. 2). While serving as the navigator in Petrel during the Spanish-American War (1898) he used one of his inventions, called a Standimeter Range Finder, to communicate the ranges of enemy ships to American gunners, an implement which was employed to great effect during the Battle of Manila Bay on 1 May 1898.

With the close of the war, Fiske remained stationed on the Asiatic Station assigned to the double-turreted Monadnock (Monitor No. 3). He was promoted to the rank of lieutenant commander in 1899. Leaving the Philippines, he served as the Inspector of Ordnance after which, he became the executive officer for, first Yorktown, and later Massachusetts (Battleship No. 2). He was promoted to the rank of commander in 1903 and subsequently assumed command of the single-turreted “New Navy” monitor Arkansas (Monitor No. 7); and later the cruisers Minneapolis (Cruiser No. 13) and Tennessee (Armored Cruiser No. 10). Following a stint of recruiting duty he was promoted to the rank of captain in 1907 and then assumed a position as the Captain of the Yard, at the Philadelphia Navy Yard, Pa.; after which he attended the Naval War College. 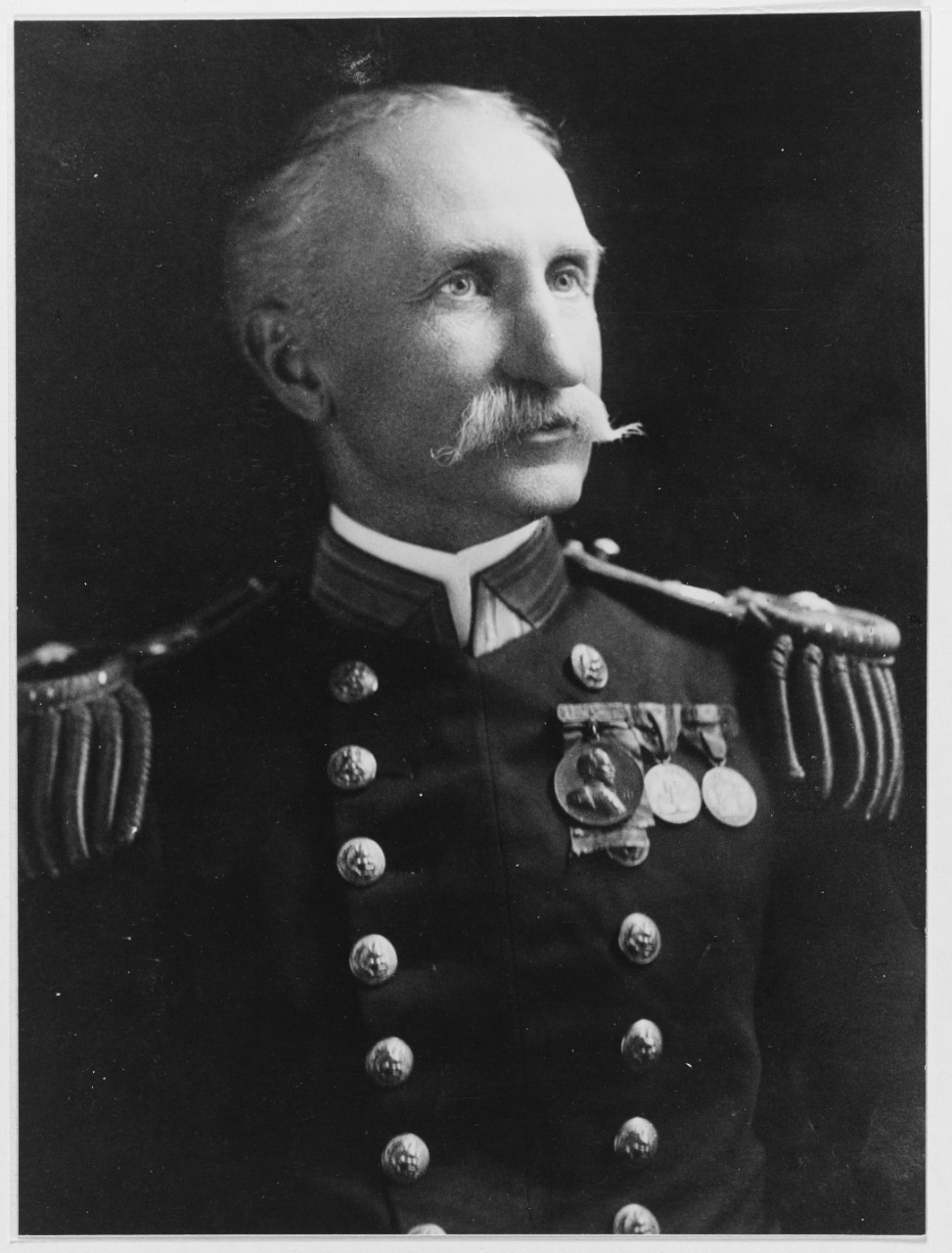 In August 1911, Fiske was promoted to the rank of rear admiral and thereafter commanded three divisions of the Atlantic Fleet, as well as served as the Secretary of the Navy’s Aid for Inspections. In February 1913, he was appointed to be the Aide for Operations, a position which later evolved into that of the Chief of Naval Operations (CNO), thanks in part to Fiske, who proved very influential in the creation of that office. In fact, Fisk resigned in 1915 as a result of ongoing policy disputes with department officials over the need for a naval general staff—he was reconciled with the Navy following the creation of that office later in the year. Following this episode Fiske went to the Naval War College for a year of study and then in June 1916, at the age of 62, he retired from the naval service.

Fiske had an undeniably distinguished career as a naval officer both at sea and on land. However, perhaps his greatest contribution to the U.S. Navy was his several technological innovations in electric and gun-control systems. Perhaps most notable was his development of gun-turret motors, an electric range finder, a naval telescope mount with sight, electric ammunition hoists, a radio system for torpedo control, and electric control systems to keep naval batteries aimed at their targets while firing continuously. In addition to these innovations Fiske was an outspoken proponent of the groundbreaking possibilities of naval aviation. In 1919, Fiske published an autobiography, From Midshipman to Rear-Admiral.

The first Fiske (DE-143) was laid down on 4 January 1943 at Orange, Texas, by Consolidated Steel Co.; launched on 14 March 1943 and sponsored by Mrs. Frances O. D. Chalkley, the wife of Capt. Henry G. Chalkley, Jr., USNR, a representative of the Eighth Naval District and supervisor of naval shipbuilding at Orange. 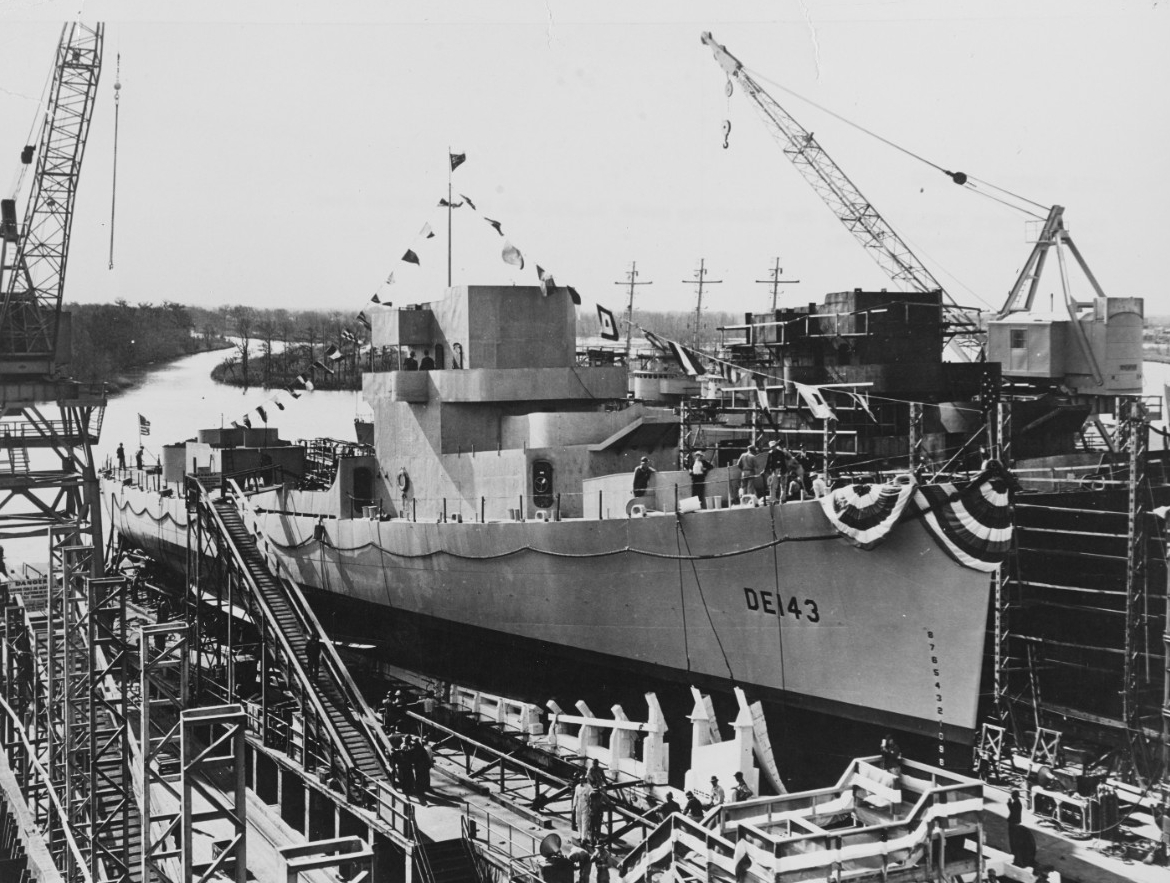 Commissioned on 25 August 1943, at Orange, Lt. Cmdr. Robert P. Walker in command, Fiske fitted out and conducted initial trials in local waters. On 30 August 1943, she got underway for Galveston, arriving there the same day and going into dry dock. On 2 September, she steamed to New Orleans, La., arriving there on the 3rd. She put back out to sea for her shakedown on 9 September and arrived at Great Sound, Bermuda, British West Indies, on the 14th. Fiske remained in those waters for the rest of the month undergoing underway training. She completed her trials on 9 October and steamed to the Charleston Navy Yard, S.C., where she arrived on the 12th for post-shakedown availability.

Fiske weighed anchor on 18 October 1943, and set course for New York. She arrived there on the 20th and moored at the 33rd St. Pier, North Brooklyn. She briefly went into dry dock the following day and then returned to her former moorings at the dock on the 22nd. Late in the morning on 23 October, Fiske set out on her first escort duty, screening convoy UGS 22. At approximately 1400, detached from the convoy, she proceeded independently for the Norfolk Navy Yard, Portsmouth, Va., where she arrived later that same day and moored port side-to Pier 5. 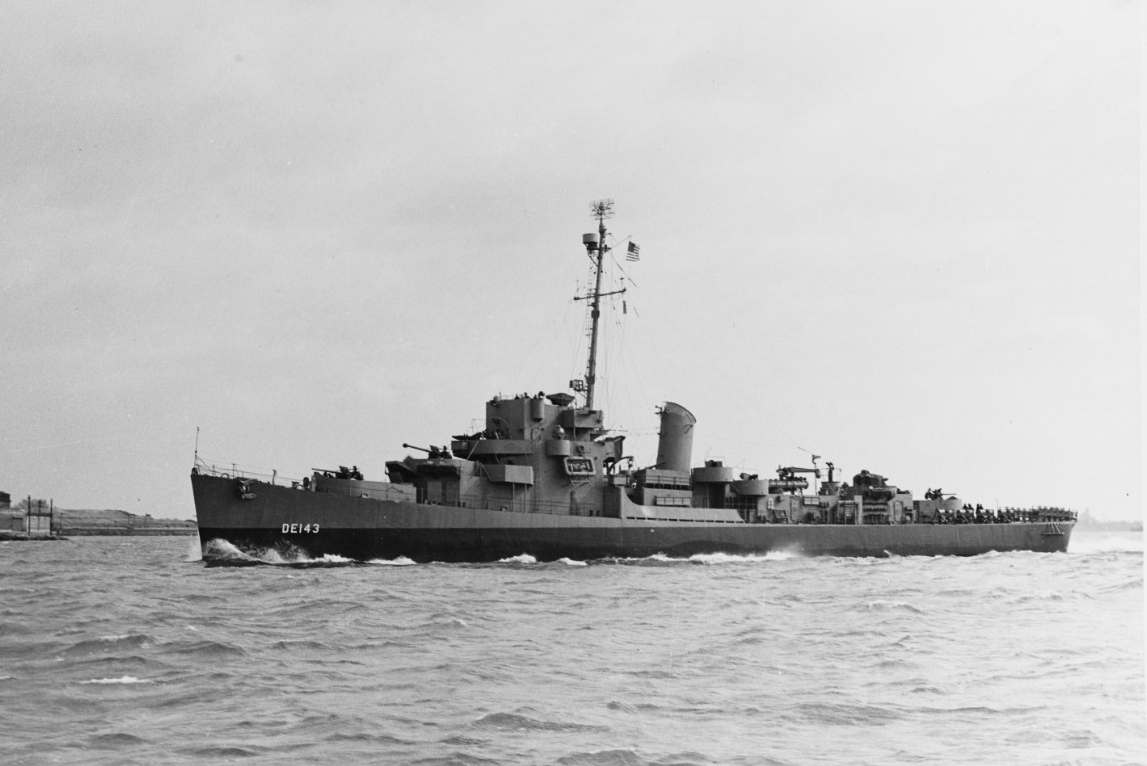 In the week following Fiske’s arrival at Norfolk she made several brief sorties out to the Chesapeake Bay conducting some minor exercises. Finally, on 12 November 1943, she got underway in earnest with Task Group (TG) 29.13 escorting the provision storeship Pastores (AF-16). After a week at sea the escort ship and her charge arrived safely at Coco Solo, Canal Zone, on 18 November and she moored port side to Pier 1, Berth C. Fiske re-fueled that evening and on the morning of the 19th got back underway steaming singly for Guantánamo Bay, Cuba.

On 21 November 1943, Fiske arrived off Guantánamo and joined the transport Orizaba (AP-24) bound for New York. The escort ship arrived at Brooklyn on the 25th and moored at the 35th St. Pier. After remaining in port for the better part of week, the ship got back underway on 2 December, this time for her first trans-Atlantic escort duty. She steamed directly to Norfolk, arriving there later that same day, and then awaited the formation of the convoy. Following a brief two-day interval Fiske got underway as an escort for UGS 26 on 4 December bound for Casablanca, French Morocco.

Fiske moored at Bassin Delpit, Casablanca on 20 December 1943. She spent eight days in port there and then on 28 December, at approximately 1135, she weighed anchor to rendezvous with convoy GUS 25. Within a few hours she took up a screening station as part of Task Force (TF) 65 escorting GUS 25 back to the U.S. The task force arrived at Norfolk on 17 January 1944, and upon being relieved of duty with the convoy, Fiske proceeded independently to New York.

Fiske spent the remainder of January 1944 in port at New York undergoing maintenance while her crew enjoyed some much needed shore leave. On 1 February, she got back to work getting underway for Norfolk to rendezvous with her next trans-Atlantic convoy. She arrived at Norfolk that same day and moored there for the evening. The following day, Fiske steamed to Lynnhaven Roads, Va., to await her convoy. UGS 32 arrived off Lynnhaven Roads on the 3rd and Fiske again took up a screening station as part of TF 65 bound for Casablanca. The escort ship arrived at Casablanca on 19 February and moored in berth 12.

Re-fueled and re-provisioned Fiske got underway on 25 February 1944, steaming in a screening station off the port flank of convoy GUS 31. She arrived off Norfolk on 17 March and, relieved of her convoy, made her way to New York where she moored at the New York Navy Yard on the 19th for an availability. 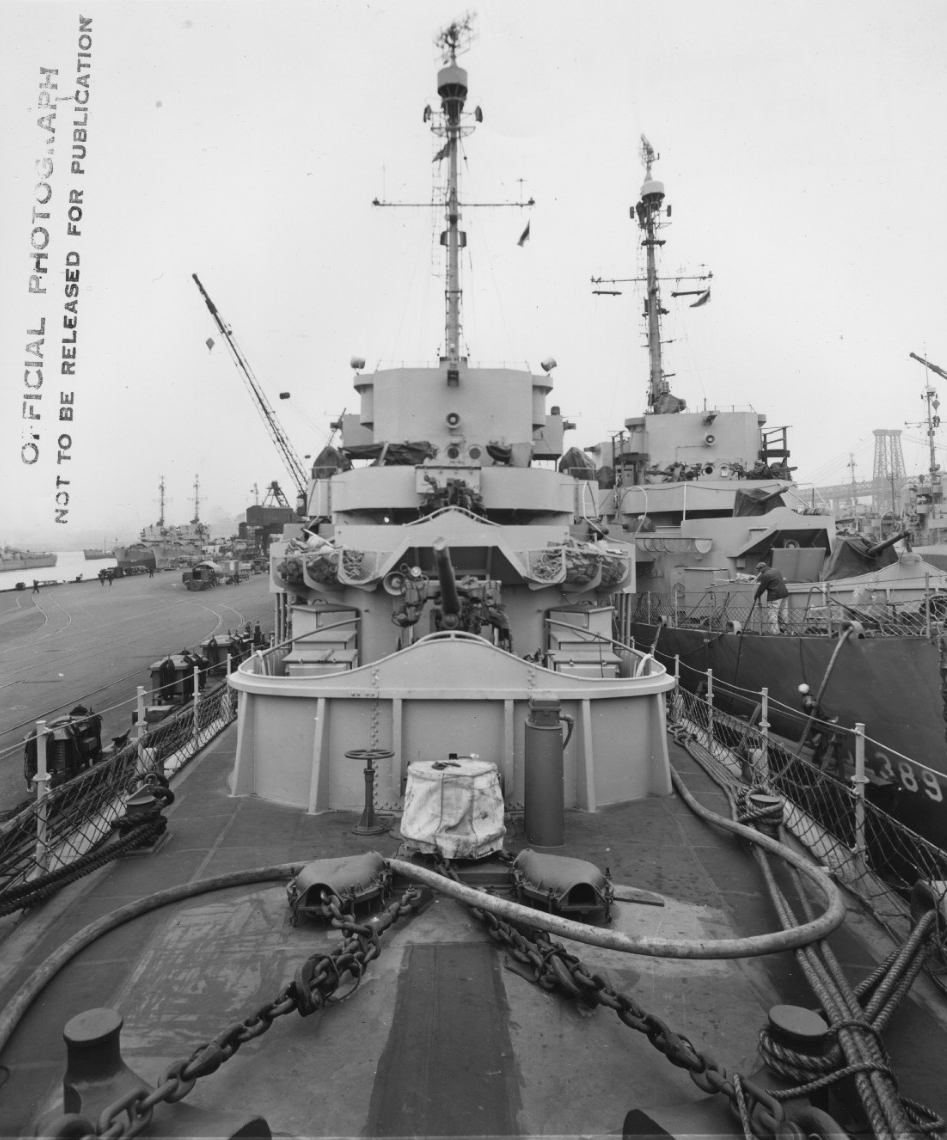 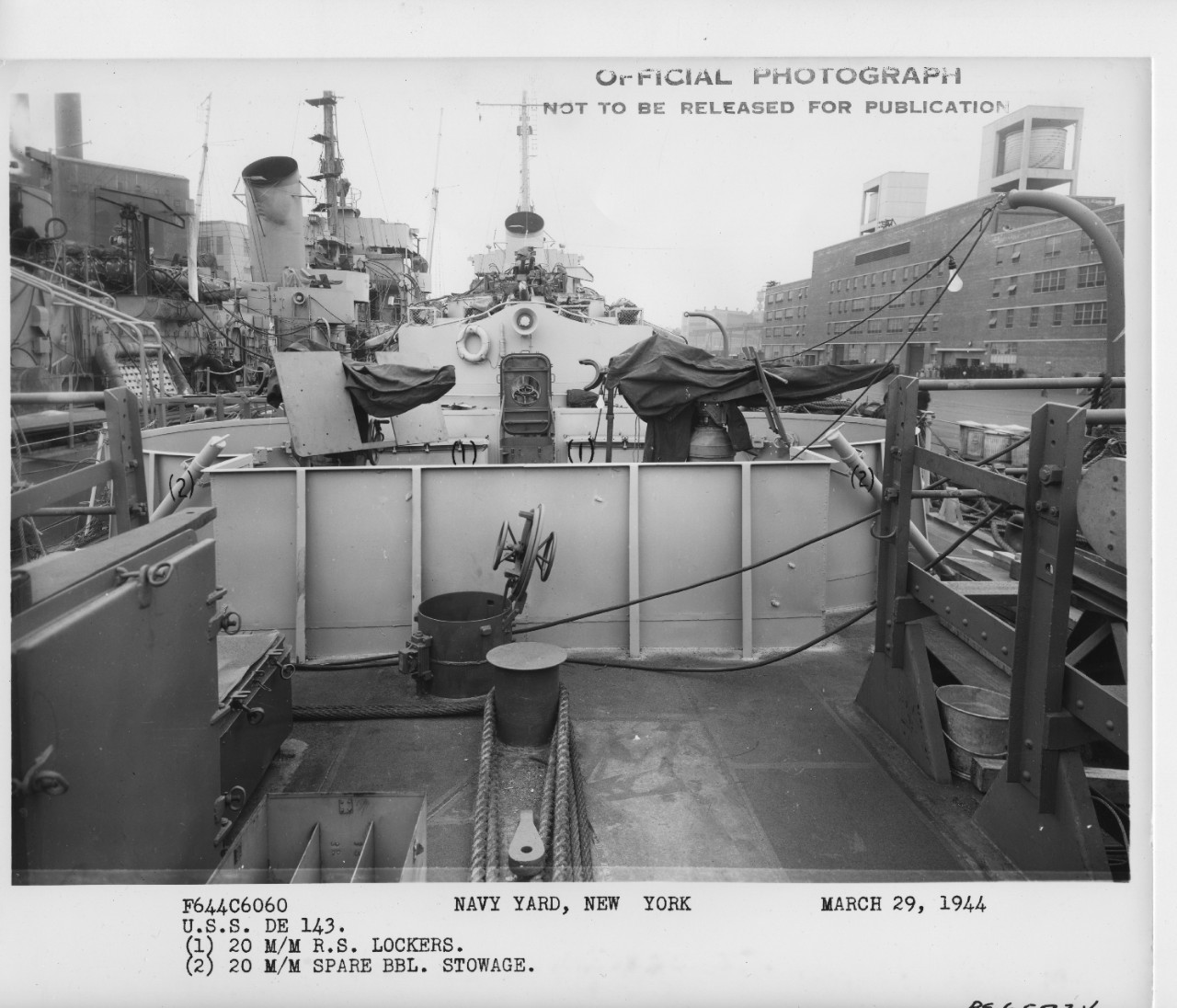 Upon completing her availability on 30 March 1944, Fiske did not immediately return to convoy duty, instead getting underway for Montauk Point, N.Y. Upon her arrival there she spent the day conducting exercises with fellow escort ships Fessenden (DE-142) and Farquhar (DE-139). On 31 March, Fiske proceeded to Lynnhaven Roads to await the arrival of a convoy. On 3 April the escort ship took up her station with UGS 38 bound for Tunisia. Shortly after reaching the western Mediterranean on 20 April the convoy came under attack by German torpedo bombers however, none of the enemy planes came within range of Fiske’s guns. They arrived at Boulet du Lac, Bizerte, Tunisia, without further incident in the early morning hours of the 2nd.

On 1 May 1944, Fiske got underway from Buoy 2, Bizerte, at approximately 1253, and shortly thereafter rendezvoused with TF 66 to escort GUS 38 to the East Coast. Fiske arrived back in New York on 21 May and then went into dry dock at the New York Navy Yard. On 1 June, Fiske was attached to Destroyer Escort Division Nine and steamed out of Brooklyn bound for Casco Bay, Maine. She arrived at Casco on the 3rd and conducted exercises for the next five days. On 8 June the escort ship proceeded to Norfolk, arriving there on the 10th.

Departing from her moorings at Norfolk on 15 June 1944, Fiske joined company with TG 22.6, a hunter-killer group formed around the escort aircraft carrier Wake Island (CVE-65). Five days later the group started out on a patrol of the Atlantic shaping a course for the Azores. Fiske remained with the group as it patrolled the seas between Northwest Africa and the Azores well into the following month. On 20 July, she put into Casablanca with the rest of the group to replenish and remained at anchor there for the next four days.

Still in company with TG 22.6, Fiske got underway on 24 July 1944, to resume hunter-killer operations. On 2 August, at approximately 1157, another escort ship in the group, Douglas L. Howard (DE-138), sighted a “white puff of smoke,” and reported seeing an undistinguishable object. The object was also picked up on radar but its identity could not be determined. Fiske joined company with Howard to investigate.

Suspicious that the object might be a German submarine Fiske prepared to launch a depth charge attack. At a range of approximately 1,075 yards she made sonar contact, but within seconds was “jolted by a terrific underwater explosion amidships.” No torpedo propeller was detected on sonar and no wake was observed in the water. The crew sprang into action taking all the necessary steps to keep the vessel afloat but only seconds after the first explosion another one occurred which, was believed to be internal. Lt. John A. Comly, Fiske’s commanding officer, in his after action report recalled that “By 1245 the ship broke in two sections and the order to abandon ship was given making sure that wounded and uninjured men were gotten safely to rafts which were well clear of the ship by this time.” Comly departed the sinking warship roughly ten minutes later. 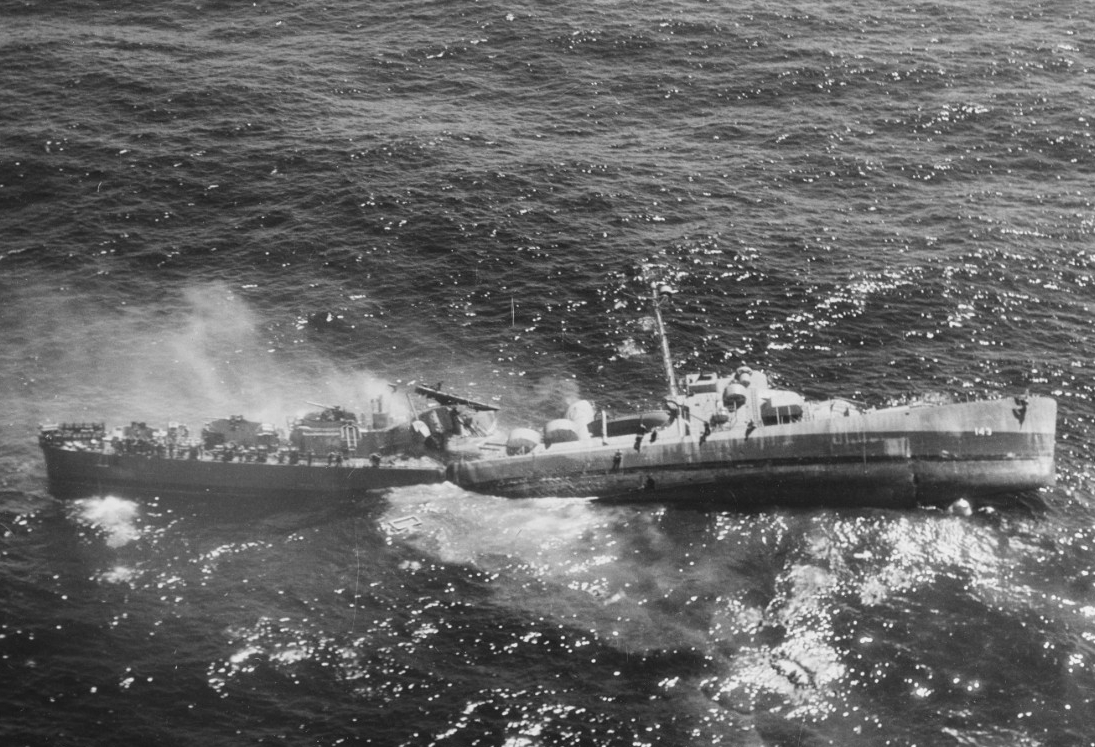 Caption: Fiske broken in two and sinking in the Atlantic Ocean on 2 August 1944, after she was torpedoed by the German submarine U-804. Note men abandoning ship by walking down the side of her capsized bow section. (U.S. Navy Photograph 80-G-270257, National Archives and Records Administration, Still Pictures Division, College Park, Md.)

Fiske had fallen prey to a torpedo launched from U-804 (Oberleutnant zur See Herbert Meyer commanding). Farquhar rescued Fiske’s survivors, 50 of whom were badly wounded as a result of the explosion, but 30 of their shipmates went down with the ship.

Fiske was stricken from the Navy Register on 22 August 1944.

Fiske was awarded one battle star for her World War II service.