Horatio Bridge (1806–98) was born in Augusta, Maine, and graduated from Bowdoin College in 1826. He was admitted to the bar in 1828, and practiced law until 1838, when he entered the Navy as a Purser. In 1854, he was named Chief of the Bureau of Provisions and Clothing. He became the first man in the Navy to employ the idea of comprehensive fleet supply, which the Navy carried out with conspicuous success during the Civil War. He retired on 8 April 1868, and was advanced to Pay Director with the relative rank of Commodore on the Retired List on 3 March 1871. He died in 1898 at Athens, Pa. 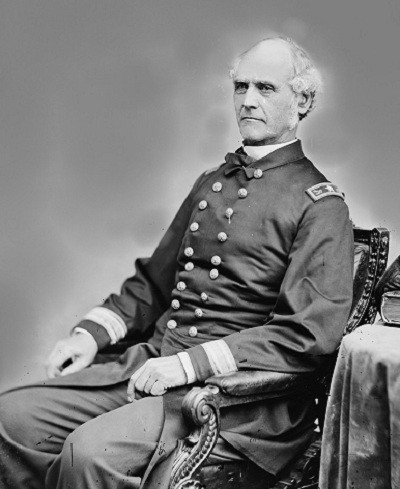 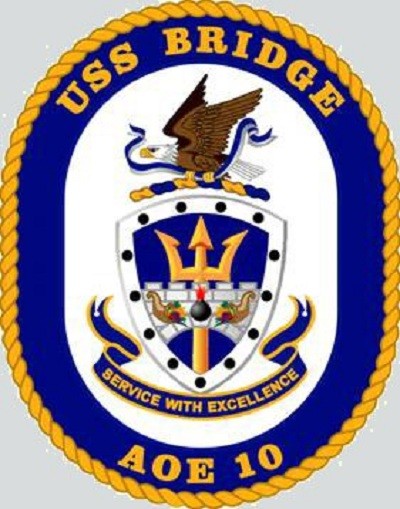 Dark blue and gold are the colors traditionally used by the Navy. The bridge, a canting reference to the ship's namesake, denotes Bridge’s support to the total readiness of the Navy by the efficient and quick distribution of supplies. The bridge also symbolizes the span from the past to the future and a logistics bridge providing sustainment to the Fleet. The bomb represents ordnance, the black pellets represent oil, and the cornucopias refer to stores and perishable cargo. The white border alludes to ice and the importance of refrigeration in the transporting of fresh stores. Horatio Bridge was the first man in the Navy to employ the idea of comprehensive fleet supply, including the floating refrigeration concept. The trident signifies Navy strength and resolve and also underscores the fact that the first Bridge (AF-1) was the first ship to be built from the keel up as a storeship. She served with distinction during WWI and WWII.

The eagle is adapted from the first Bridge’s seal to show continuity and a proud heritage of service. The blue and gray ribbon reflects Civil War service and honors Commodore Bridge as Chief of the Bureau of Provisions and Clothing during that period.

She was decommissioned on 24 June 2004, and transferred to the Military Sealift Command (MSC), which operated the fast combat support ship as USNS Bridge (T-AOE-10).

A magnitude 9.0 (Mw) undersea megathrust earthquake occurred off the Tōhoku region of Honshū, Japan, at 1446 on 11 March 2011. The earthquake triggered tsunami waves that reached more than 100 feet in height at places, and caused nearly 25,000 casualties, including more than 15,000 killed. The United States initiated Operation Tomodachi, from the Japanese Tomodachi Sakusen—Operation Friend(s), to provide humanitarian relief to the victims. A total of 24,000 U.S. servicemembers, 189 aircraft, and 24 ships served in Tomodachi (12 March–4 May 2011).

When the disaster occurred, Bridge sailed en route to South Korean waters, but the Navy diverted her and she reached the area of the catastrophe on 13 March, within 48 hours of the earthquake. Sikorsky MH-60S Seahawks had previously replaced the ship’s embarked Sea Knights, and they surveyed the coastline. Navy Lt. Cmdr. Steve Thomas, the ship’s air detachment officer-in-charge, reported the widespread devastation he witnessed from his Seahawk. “We spotted a drifting commercial boat still tied up to a dock about 30 miles out to sea,” Thomas said. Bridge’s helicopters then delivered more than 30,000 pounds of relief supplies ashore, sometimes landing on baseball fields and empty parking lots. Bridge also responded to short-fuse replenishment requirements, at times utilizing her full capacity to service multiple ships. “It was not unusual to have two customers alongside port and starboard at the same time, and two in tow,” Bridge’s civil service Cargo Mate Kevin Farrin explained.

Bridge is scheduled to be taken out of service on 31 March 2014.