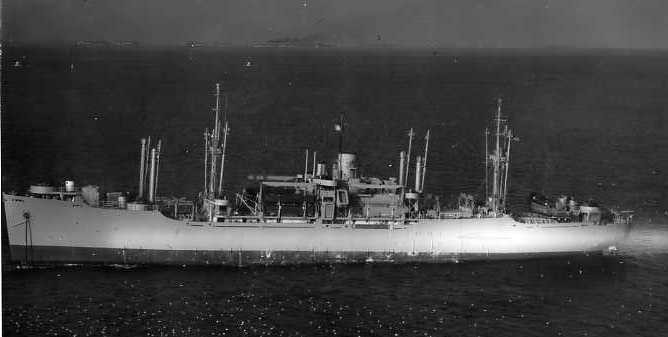 Caption: Braxton, 18 December 1944, ten days prior to her acquisition by the Navy. (National Archives and Records Administration, Photograph 80-G-293951)

A county in west central West Virginia, established on 15 January 1836 and named in honor of Carter Braxton (1736-1797), a Virginia legislator, delegate to the Continental Congress, and signer of the Declaration of Independence.

Acquired by the Navy from the Maritime Commission on a loan-charter basis on 28 December 1944; Braxton was commissioned the following day at Terminal Island, San Pedro, Calif., Comdr. William L. Bray, USNR, in command.

Following alterations and repairs at the U.S. Naval Drydocks, Terminal Island (3-5 January 1945), Braxton sailed on 9 January for shakedown training in the Long Beach, Calif., area. Less than a week later on 14 January, the attack transport collided with the merchant tanker Mission Capistrano during a heavy fog and suffered damage to two LCVPs, three life rafts, and her hull. Following the necessary repairs, she departed Long Beach on 22 January, proceeded to San Diego, Calif., and reported the next day for duty with the Amphibious Training Command, Pacific Fleet.

Braxton then conducted amphibious exercises off the coast of southern California until mid-February 1945, and then headed for San Francisco, Calif., where she arrived on the 20th. After embarking passengers, she departed from the Bay area on the 24th, bound for the Territory Hawaii. The ship moored at Pearl Harbor, T.H., on 1 March and disembarked her passengers: 3 WAVES (Women Accepted for Voluntary Emergency Service) officers, 83 enlisted WAVES and 40 enlisted men. For the rest of the month, she operated in Hawaiian waters conducting amphibious exercises off Maui and Oahu.

On the morning of 9 April 1945, Braxton sailed for the Marshall Islands in convoy PD-372T: which also included attack transport Bottineau (APA-235), War Shipping Administration (WSA) troopship Sea Flasher, and the minesweepers Fixity (AM-235) and Inaugural (AM-242), and anchored at Eniwetok on the morning of 18 April. The following day, after picking up additional screening vessels in the minesweeper Change (AM-159) and the escort patrol vessel PCE-898, the convoy sailed for the Marianas.

Braxton reached Saipan early on 23 April 1945 and disembarked some of her passengers before pushing on to Guam which she reached on the afternoon of the 26th. There, she disembarked her remaining out-bound passengers before embarking USMC officers and enlisted men as well as stretcher-bound and ambulatory casualties for the return voyage on 1 May. That afternoon, the transport sailed for Oahu. Braxton arrived at Pearl Harbor on the morning of 10 May, but sailed the following morning for the west coast. Although initially ordered to San Diego, she was re-routed to San Francisco en route and disembarked 120 Marines and 217 casualties there on 17 May. After brief voyage repairs, the ship then shifted to the Naval Supply Depot at Oakland, Calif., where she loaded a cargo of fuel, ammunition, and supplies, before sailing for Hawaii on 30 May.

Arriving at Pearl Harbor on 5 June 1945, Braxton disembarked her passengers from the west coast and embarked 5 army officers and 296 enlisted men for the voyage westward, standing out to sea on the 8th. Pausing at Eniwetok en route (15-16 June), she pushed on to Saipan, remained there from the 19th through the 26th, and finally headed on to Ulithi. Underway from that atoll on 20 July in convoy UOK [Ulithi to Okinawa]-39, consisting of 40 ships, both naval and merchant, the vessel arrived at Okinawa soon thereafter and discharged her cargo near Kinmu Wan on 25 July.

Braxton remained at Okinawa for the remainder of the month, wartime conditions very much in evidence. As her war diarist writes on 27 July 1945: "enemy planes definitely in [the] vicinity...." The presence of the Japanese aircraft usually triggered the use of smoke boats and shipboard generators to shroud the ship in artificial fog. Such conditions continued into August, varied only by the arrival of a typhoon that forced the ship to put to sea on 1 August to ride out the storm.

Early on 6 August 1945, Braxton weighed anchor and sailed for Ulithi, joining convoy OKU [Okinawa to Ulithi]-17: 34 ships and 11 escorts. Upon her arrival there on the 10th, she fueled from the oiler Sepulga (AO-20) and received orders to sail for Saipan. Underway on 13 August, she had not gone far before she received orders re-routing her to Guam. Braxton moored in Apra Harbor on 14 August and commenced loading cargo and embarking passengers.

All through the night and most of the morning on 14 August 1945, the embarking (beginning with the men of Company E, 2nd Battalion, 4th Marines, 6th Marine Division) and loading continued until shortly before noon. Underway on the 15th, Braxton stood out of Apra Harbor, bound for Japan with 52 USMC officers, 1,117 enlisted Marines, and "20 public relations personnel," then formed up with the attack transports Grimes (APA-172), Meriwether (APA-203), Mellette (APA-156), and Lanier (APA-125), attack cargo ship Waukeska (AKA-84), and a trio of destroyers to make up Task Unit (TU) 12.1.2. Ultimately, Braxton and her consorts joined TF 31, commanded by Rear Adm. Oscar C. Badger in the battleship Iowa (BB-61), on 19 August 1945.

Six days later, Braxton became a unit of Task Group (TG) 31.1 and, after embarking Lt. H. Tamaki, a Japanese harbor pilot clutching an armload of charts for his piloting assignment, by bosun-s chair from the destroyer Heywood L. Edwards (DD-663), dropped anchor on the afternoon of 29 August 1945 in berth 40, Sagami Wan, Honshu. "The greater part of the Third Fleet and British warships of all classes proceeded [sic] us into Sagami," the ship's war diarist crows, "but the Braxton was the first Naval Transport to enter Sagami Wan." 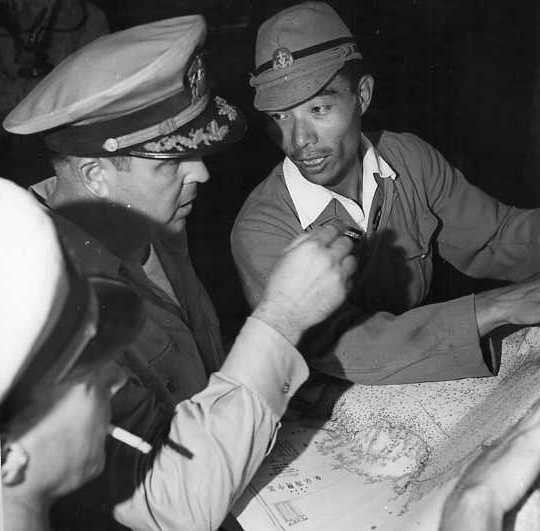 In the pre-dawn darkness of 30 August 1945, Braxton weighed anchor, and, in company with three destroyers and three high speed minesweepers, stood into Tokyo Bay proper, lowering her landing craft to the rail ten minutes after the close of the mid watch to begin disembarking Marines off the sprawling naval base at Yokosuka, southwest of Tokyo. "As the brightening day revealed Futtsu Saki, 1,500 yards away," the Leathernecks disembarking into the LCVPs "could see the massive forts, with white flags flying over them as prescribed." As one Marine "surveyed the scene" over the ramp of his landing craft, he remarked hopefully, "I hope they mean it."

The debarkation completed at 0516 on 30 August 1945, Braxton's boats stood in to the beach, and at 0550, the first foreign invaders to occupy Japanese soil, men of the 2nd Battalion, 4th Marines, under the command of Maj. Frank Carney, USMC, landed. Two companies seized the "main fort and armory at the center of Futtsu Saki," while a third occupied the second fort at the extreme tip of the peninsula. The Marines confiscated caches of arms and ammunition while their erstwhile enemies meekly looked on. The Leathernecks then "went energetically about their task of demolishing the powerful fortifications that would emperil [sic] shipping if the Japanese should change their minds [about surrender]." Braxton, meanwhile, returned to the transport area of Tokyo Bay. During the rest of the day, more Marines, together with bluejacket detachments and Royal Marine units, under the guns of the 3d Fleet and beneath a veritable umbrella of aircraft, occupied Yokosuka.

On 1 September 1945, Braxton sailed for the Marianas, and anchored in Saipan harbor on the 5th. The next morning, she fueled from the station tanker Caribou (IX-144). She then shifted to Tanapag Harbor where, between 9 and 11 September, she embarked 55 USMC officers, 6 USN officers, 1,198 enlisted Marines (from the 2nd Battalion, 2nd Marines, 2nd Marine Division), and 44 USN enlisted men. She cleared Tanapag Harbor on the afternoon of 18 September, bound for Nagasaki, a place once considered one of Japan's finest natural harbor ports.

Early in the afternoon of 23 September 1945, as a "quiet calm ruled-auguring well for a peaceful occupation," Braxton and the other transports disembarked the 2nd and 6th Marines on the east and west sides, respectively, of the devastated Japanese city. Three days later, along with nine other attack transports, an attack cargo ship, and a single escort, she sailed for the Philippines. After refueling and re-provisioning at Manila (9-11 October), she embarked elements of the U.S. Army-s 25th Infantry Division at Lingayen Gulf (12-14 October). Then, after remaining at anchor off San Fernando Point, she got underway on 23 October in Lingayen-Nagoya Convoy No. 2.

Braxton reached Nagoya on 28 October 1945, but did not moor until the 30th. There, she disembarked the 25th Infantry-s rear echelon troops and completed working her cargo later that day. Having thus put her "third load of occupation troops on Japan," Braxton sailed for San Pedro, Calif., on 3 November as part of the Magic Carpet fleet. She then made a round-trip, Magic Carpet voyage to the Philippines and returned to San Pedro on 13 February 1946, where she debarked her passengers, "naval personnel, Navy nurses, enlisted Marines, guards and prisoners."

Braxton remained there into early April 1946. On the 9th, LCI-1017 came alongside and transferred 8 German officers, 154 enlisted men, and 2 prisoners, the remaining crewmen of the heavy cruiser Prinz Eugen (IX-300), a war prize that had been brought to the United States from the Baltic, to Braxton. The attack transport got underway early in the first dog watch that same day.

Completing her transit of the Panama Canal on 17 April 1946, Braxton reached Staten Island early on of the 23rd. She then embarked 1,492 U.S. Army enlisted men and, with the 164 former Prinz Eugen crewmen still on board, sailed for Germany on 3 May 1946, reaching Bremerhaven on the morning of the 10th.

Ten days later, Braxton got underway for the United States with naval and military passengers and returned to Staten Island on 30 May. Underway for Norfolk, Va., on 3 June, Braxton anchored in Hampton Roads the following morning. Proceeding thence to the Naval Operating Base, Norfolk, she unloaded ammunition there, then shifted to the Norfolk Shipbuilding and Drydock Company yard where, at 1015 on 27 June 1946, she was decommissioned.

Braxton was turned over to the WSA on the 29th, and her name was stricken from the Navy list on 19 July 1946. She was placed in the portion of the National Defense Reserve Fleet berthed in the James River, Va. She remained there, inactive, until sold on 9 April 1973 to the Union Minerals and Alloys Corp., of New York City, N.Y., to be scrapped.