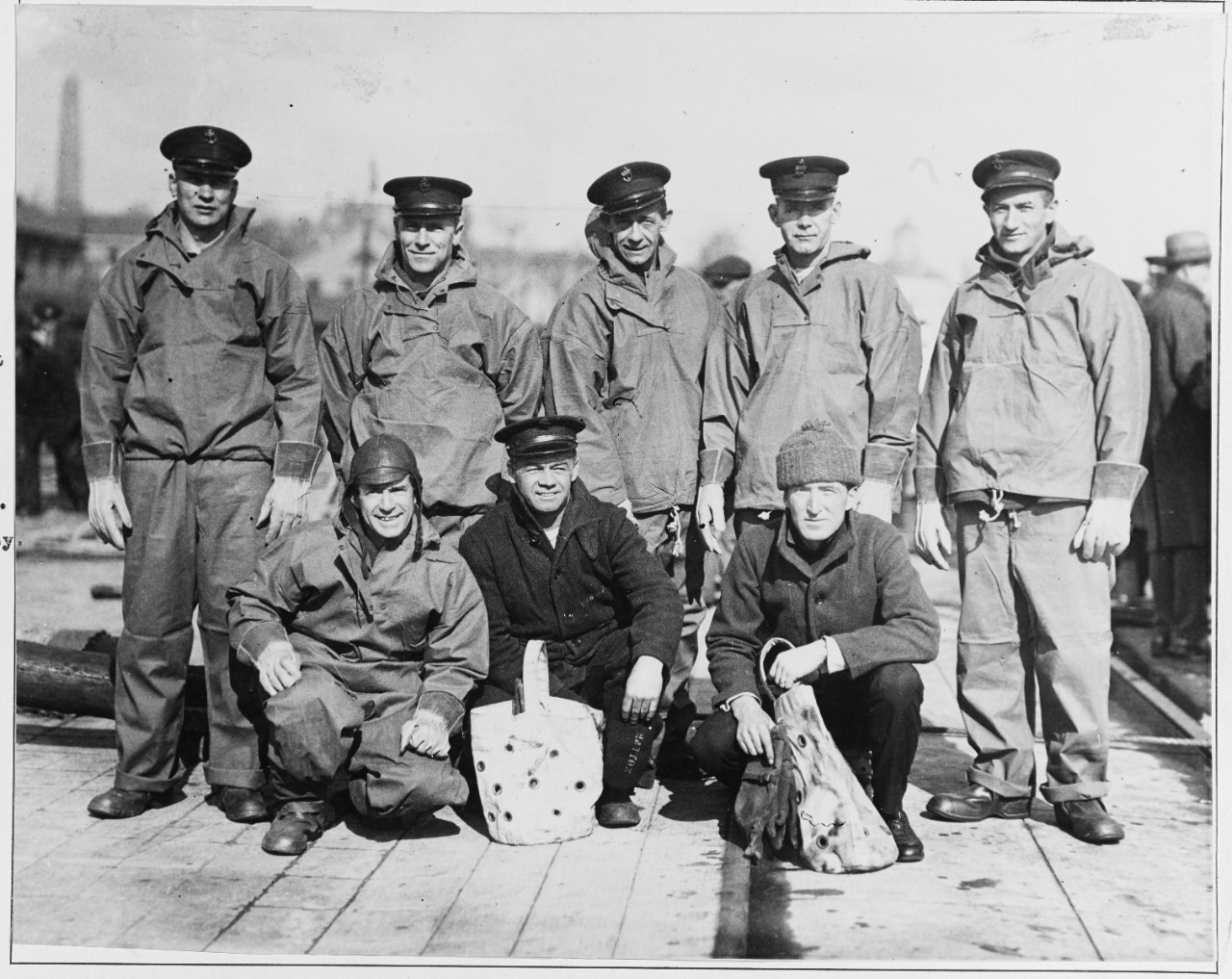 Description: Naval divers who worked hard and faithfully at the difficult task of raising the submarine (quoted from the original 1928 caption). Probably photographed at the Boston Navy Yard, Charlestown, Massachusetts, circa 19-20 March 1928, shortly after the salvaged S-4 entered dry dock there. Those present are identified in the original caption as (standing, left to right): Michaels, Eadie, Wilson, Carr and Eissn. (Kneeling, left to right): Grilley, Mattox and Doherty. Michaels may be Chief Torpedoman Michels. Eadie is Chief Gunner's Mate Thomas Eadie, who was awarded the Medal of Honor for rescuing Michels during the salvage work. Grilley is probably Ensign Frank W. Crilley. U.S. Naval History and Heritage Command Photograph.
Related Content

"For display of extraordinary heroism in the line of his profession above and beyond the call of duty during the diving operations in connection with the sinking in a depth of water 304 feet, of the U.S.S. F-4 with all on board, as a result of loss of depth control, which occurred off Honolulu, T.H., on 25 March 1915. On 17 April 1915, William F. Loughman, chief gunner's mate, United States Navy, who had descended to the wreck and had examined one of the wire hawsers attached to it, upon starting his ascent, and when at a depth of 250 feet beneath the surface of the water, had his life line and air hose so badly fouled by this hawser that he was unable to free himself; he could neither ascend nor descend. On account of the length of time that Loughman had already been subjected to the great pressure due to the depth of water, and the uncertainty of the additional time he would have to be subjected to this pressure before he could be brought to the surface, it was imperative that steps be taken at once to clear him. Instantly, realizing the desperate case of his comrade, CRILLEY volunteered to go to his aid, immediately donned a diving suit and descended. After a lapse of time of 2 hours and 11 minutes, CRILLEY was brought to the surface, having by a superb exhibition of skill, coolness, endurance and fortitude, untangled the snarl of lines and cleared his imperiled comrade, so that he was brought, still alive, to the surface."

"For extraordinary heroism and fearless devotion to duty during the diving operations in connection with the salvage of the USS S-4, sunk as a result of a collision off Provincetown, Massachusetts, 17 December 1927. During the period 17 December 1927 to 17 March 1928, on which latter date the ill-fated vessel was raised, Crilley, under the most adverse weather conditions, at the risk of his life, descended many times into the icy waters and displayed throughout that period fortitude, skill, determination and courage which characterizes conduct above and beyond the call of duty."