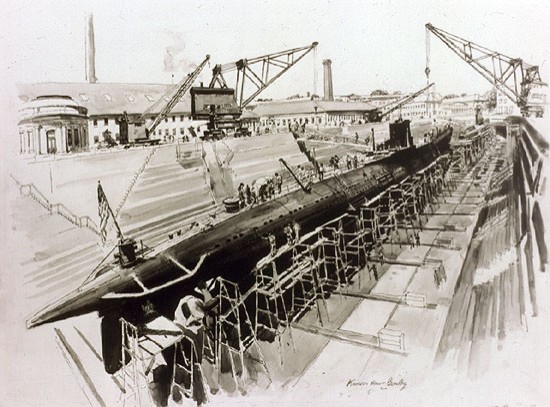 Established by the Federal Government in 1800, Portsmouth Naval Shipyard (PNSY) launched its first product, the 74-gun warship USS Washington, in 1815.  During World War I, the PNSY workforce expanded to nearly 5,000.  At this time, PNSY took on a new and important role—the construction of submarines—in addition to the overhaul and repair of surface vessels.  World War II saw the civilian employment rolls swell to over 25,000.  Over the course of World War II over 70 submarines were constructed at PNSY, with a record four submarines launched on one day.  Following World War II, PNSY was the Navy’s center for submarine design and development.  PNSY continued to build submarines until 1969, when the last submarine built in a public shipyard, the nuclear powered USS Sand Lance, was launched.  Today the Shipyard continues the tradition of excellence and service to the Navy and the nation by supplying the U.S Navy's submarine fleet with high quality, affordable, overhaul, refueling and modernization work.