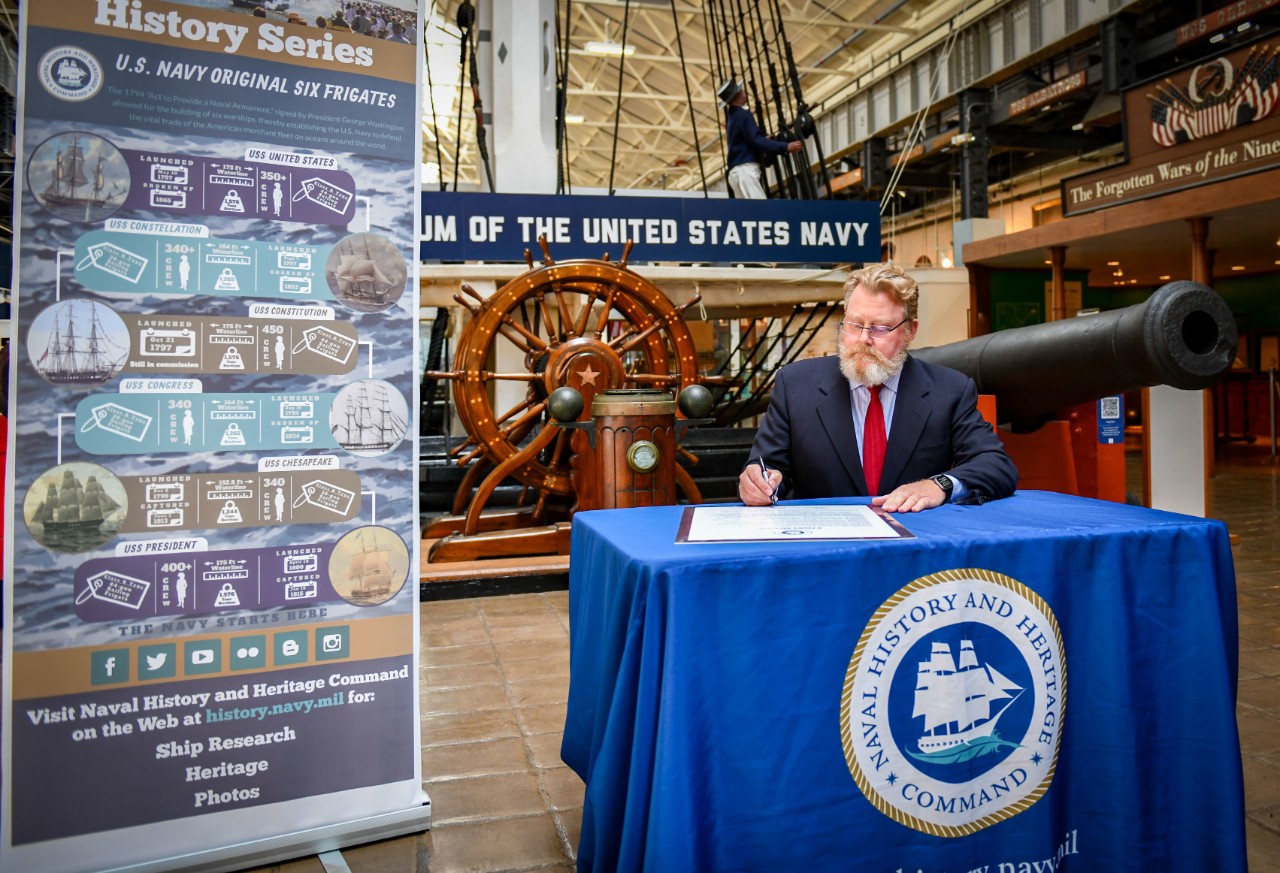 The date marks the 225th anniversary of the launch of the first of the U.S. Navy’s original six frigates (United States), which was authorized in the 1794 legislation entitled “An Act to Provide a Naval Armament.”

“The launch of the first six frigates was a significant moment in both U.S. Navy and American History,” said Burns. “It’s important that we mark this 225th anniversary—some of our country’s earliest heroes, achievements, and traditions are part of the six frigates’ story.”

After the American Revolution, trade with foreign countries was an important part of the new United States’ economic recovery.  In 1794, Congress authorized the creation of a new navy to protect American lives and commerce overseas, specifically in response to Algerine corsairs that captured U.S. merchant vessels and enslaved their crews.

The “Act to Provide a Naval Armament,” signed by President George Washington on March 27, 1794, allowed for the purchase or building of six warships. The decision to build six sailing frigates established the U.S. Navy which defended the vital trade of the American merchant fleet on oceans around the world.

As the first ships purpose-built for the U.S. Navy, the frigates combined the best of warship ideas and designs of both the British and French navies and the finest structural materials to create larger, heavier ships, carrying more powerful armament.  Intended to out-sail and out-gun opponents, the frigates defended the United States in the country’s first three wars: the Quasi-War with France, the first Barbary War, and the War of 1812. In the War of 1812 United States and Constitution attained fame in their victories against the British Navy.

Of the six frigates, USS Constitution, America’s Ship of State, is the sole survivor.

“When you walk the decks of USS Constitution, you are following some of the U.S. Navy’s greatest captains – Edward Preble, Isaac Hull, William Bainbridge, Thomas McDonough, David Dixon Porter, and George Dewey,” said Margherita M. Desy, a USS Constitution historian with NHHC Detachment Boston. “USS Constitution is our direct link to the beginnings of the U.S. Navy. Commemorating the 225th anniversary of the launchings of the six original frigates provides an opportunity to reexamine and appreciate the contributions and sacrifices of the men, and now women, who have, and continue to, sail the world, keeping sea lanes free for all.”

It is important to remember that even in the age of aviation and space exploration, 95% of the world’s goods still travel by sea. The United States Navy is on duty around the world 365 days a year.