The director of Naval History and Heritage Command (NHHC) participated in a ceremony to present the Navy Distinguished Public Service Award to James D. Hornfischer May 17 during a virtual ceremony. 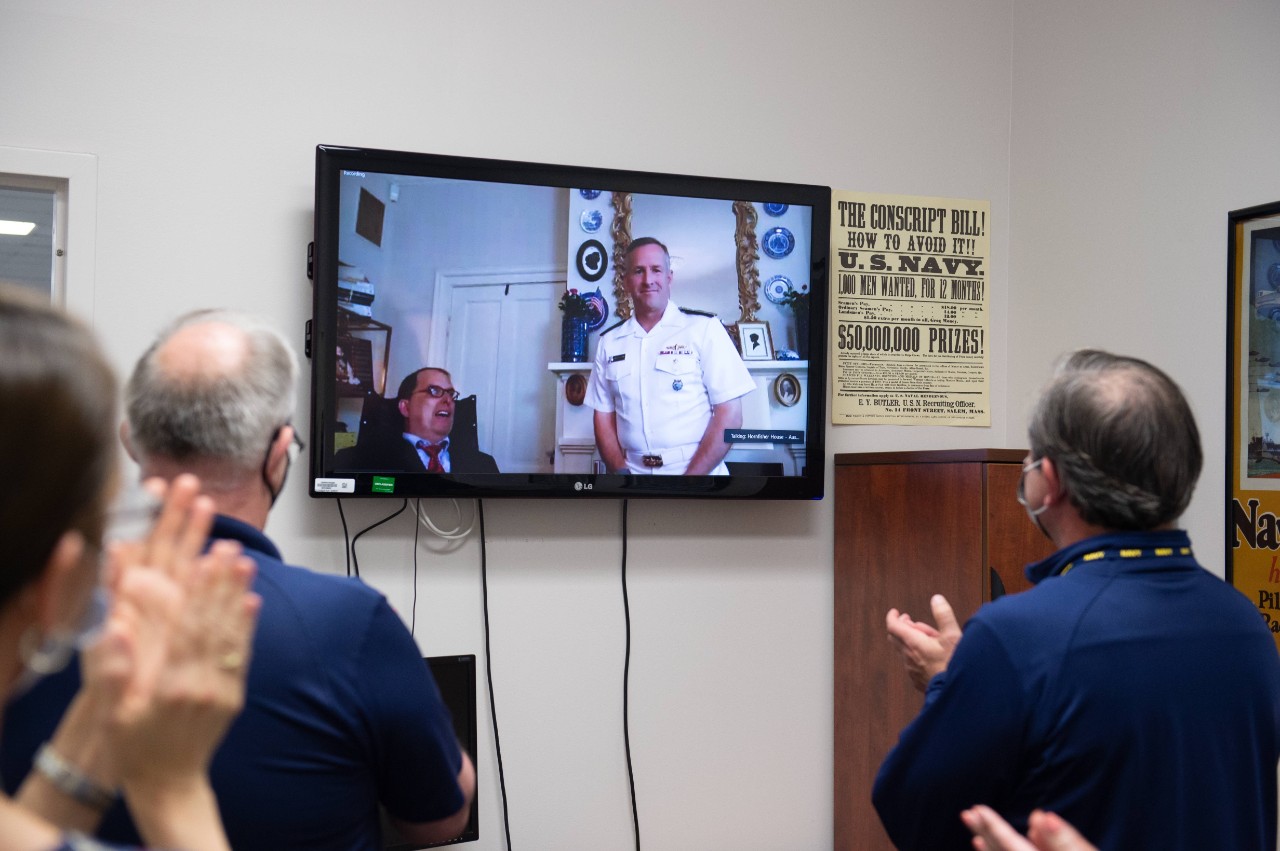 WASHINGTON NAVY YARD  (May 17, 2021) Members of Naval History and Heritage Command watch as Rear Admiral Theodore LeClair presents the Distinguished Public Service Award to James D. Hornfischer during a virtual award ceremony May 17. The Navy Distinguished Public Service Award, signed by the U.S. Secretary of the Navy, is the highest honor for which non-Navy employees can be awarded, honoring individuals who have carried out acts of valor or heroism or who have demonstrated exceptionally outstanding service of substantial and long-term benefit to the Navy, Marine Corps, or the Navy as a whole. (U.S. Navy photo by Mass Communication Specialist 2nd Class Abigayle Lutz)

The director of Naval History and Heritage Command (NHHC) participated in a ceremony to present the Navy Distinguished Public Service Award to James D. Hornfischer May 17 during a virtual ceremony.

During his remarks at the ceremony, NHHC Director Samuel J. Cox, a retired U.S. Navy rear admiral, explained the significance of the award, highlighting Hornfischer’s distinguished public service to the Department of the Navy as an award winning naval historian, Naval Historical Foundation board member, and noted historical speaker.

“Anytime someone asks me ‘what’s the best book to read about the United States Navy?’, my first answer is always Last Stand of the Tin Can Sailors,” said Cox. “If you want to know what makes the Navy tick, that’s the book you ought to read.” Cox described three more books written by Hornfischer, Neptune’s Inferno, Ship of Ghosts, and The Fleet at Flood Tide, as “magnificent works.”

“I consider your work to be of such enduring value to the United States Navy that it met the criteria [of the Navy Distinguished Public Service Award], and when I proposed the award to the Chief of Naval Operations, Admiral  Michael Gilday, he didn’t hesitate for a second in backing the award,” Cox said.

All of Hornfischer’s books have been on the CNO’s Professional Reading Program list, which aims to train and educate Sailors through the study and application of historical lessons.

“If you only ever read one book to understand the U.S. Navy, read Hornfischer’s Last Stand of the Tin Can Sailors," said Captain Jim Lockard, Hornfischer’s nephew, who read the award citation during the ceremony. “Although they are well-researched objective history, his books are full of stories of incredible valor and sacrifice that make today’s Sailors understand they are part of something bigger than themselves and will inspire future Sailors to greatness.”

Rear Admiral Theodore LeClair, friend of Hornfischer and the deputy director for operations, J-3, U.S. Indo-Pacific Command, presented the award to Hornfischer during the ceremony.

“Our young Sailors, officers and enlisted need to know what people had to do before them, and I truly believe that Jim’s work will help them to do that,” said LeClair. “You are an extraordinary human being, and your words will endure for years, helping us train future Sailors to prepare to go to sea.”

At the end of the ceremony, Hornfischer shared a few words stating, “My heart swells with appreciation to be so recognized. It is the pride of my life to have been able to tell the stories in a way that registers with the Navy, naval professionals, and non-military individuals alike. I am eternally grateful for everyone who gets up each day and puts on a Navy uniform.”

“Writing history has been a chance to convey that from the close viewpoint of the people whose courage, intellect and grit produced an epochal victory,” said Hornfischer in a 2018 Charlestown Patriot Bridge news article.

In an interview conducted by the Center for International Maritime Security (CIMSEC) in 2016, Hornfischer stated that he would spend about 18 to 24 months researching before even thinking about writing. “History to me is intensively visual, both in the writing and in the illustrating, so this is a major emphasis for me all along the way,” said Hornfischer during this interview.  “I never offload any of this work to a research staff.”

The Navy Distinguished Public Service Award, established in 1951, is the highest honor for which non-Navy employees can be awarded. Signed by the U.S. Secretary of the Navy, it honors individuals who have carried out acts of valor or heroism or who have demonstrated exceptionally outstanding service of substantial and long-term benefit to the Navy, Marine Corps, or the Navy as a whole.

NHHC, located at the Washington Navy Yard, is responsible for the preservation, analysis and dissemination of U.S. naval history and heritage. It provides the knowledge foundation for the Navy by maintaining historically relevant resources and products that reflect the Navy's unique and enduring contributions through our nation's history, and supports the fleet by assisting with and delivering professional research, analysis and interpretive services. NHHC is composed of many activities including the Navy Department Library, the Navy Operational Archives, the Navy art and artifact collections, underwater archeology, Navy histories, 10 museums, USS Constitution repair facility and the historic ship Nautilus.