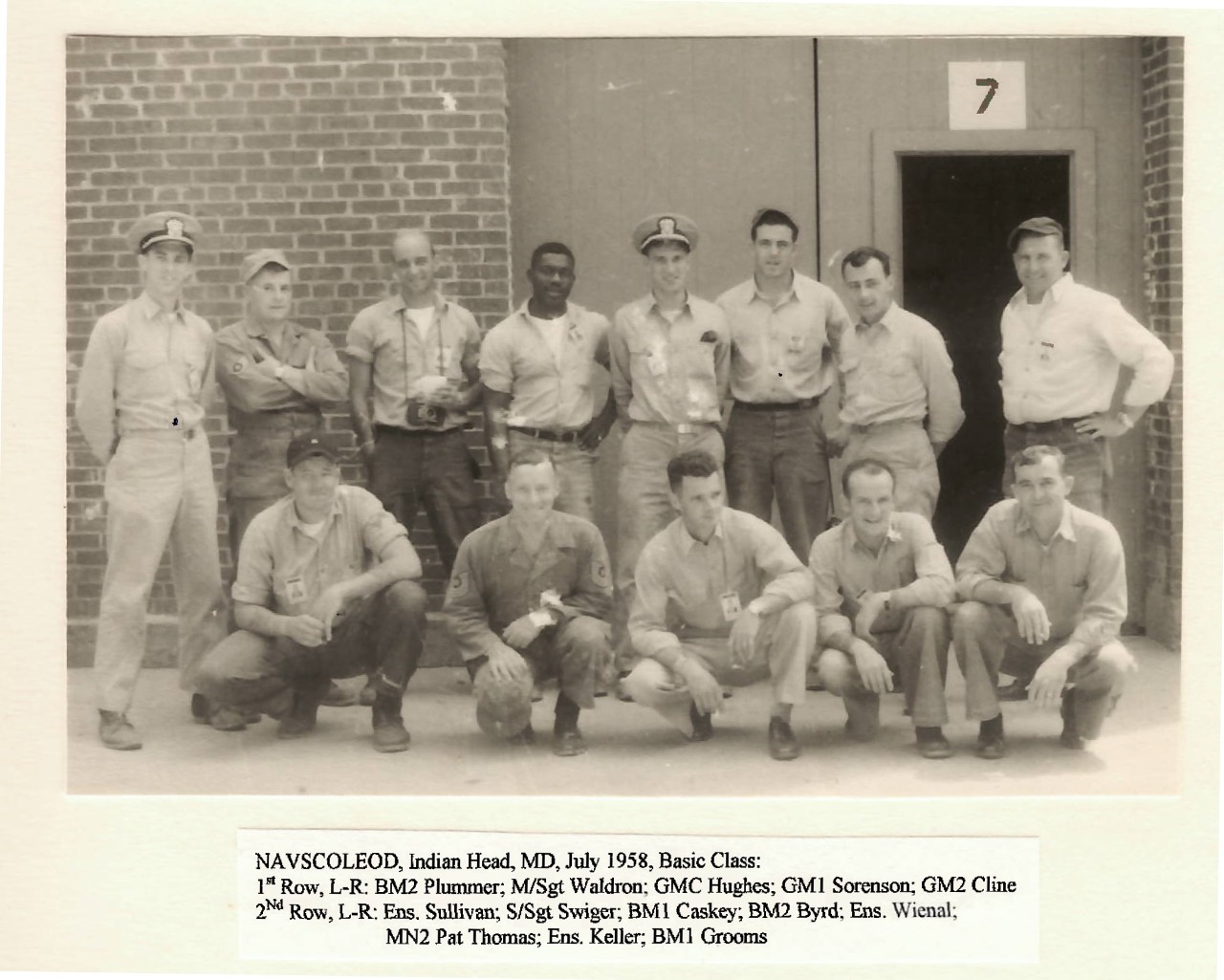 BMCM Byrd’s graduation from EOD School, July 1958. Image used with permission of Navy EOD Association and is subject to copyright.

The Navy EOD community was founded in 1941 by Lt. Cmdr. Draper Kauffman, an American who developed his skills as a bomb disposal expert while working with the Royal Navy Volunteer Reserve in 1940.

Kauffman was home in the U.S. on leave when Japan bombed Pearl Harbor. Recognizing the need to develop an explosive ordnance disposal capability within the U.S. military, the Navy awarded Kauffman a commission, and he traveled to Hawaii to disarm a Japanese bomb dropped next to a magazine at Fort Schofield. He rendered the weapon safe, disassembled it, and shipped it to Washington, D.C., for further analysis. The expertise he demonstrated led to his second mission—establishing a school for mine and bomb disposal.

The school, established in 1941, is the direct precursor of today’s Naval School Explosive Ordnance Disposal or “EOD School” in Eglin, Florida, where EOD operators from across the Department of Defense undergo rigorous training to locate, identify, render safe, recover, analyze, and dispose of all ordnance types. In building this new community, Kauffman needed people. One of his strongest arguments for recruiting the right type of individual was stating that this line of work saved lives rather than destroyed them. Kauffman was not looking for daredevils, but those individuals who had ingenuity and courage, or as he was taught— self-confidence, self-discipline, and self-reliance.

Only 17 years after the first Mine Disposal class graduated, Master Chief Boatswain’s Mate (BMCM) Sherman Byrd graduated from the Naval School of Explosive Ordnance Disposal (NAVSCOLEOD) in Indian Head, Maryland with Class 04B-58 in 1958. BMCM Sherman Byrd was born in Carrollton, Mississippi September 7, 1930. The youngest of five children, he was raised in a sharecroppers’ family. Byrd completed the 8th grade at Stone Street High School in Greenwood, Mississippi then later joined the Navy on December 26, 1947 at the age of seventeen. Following boot camp in San Diego, he served on four ships, advancing from Seaman Recruit to Boatswain’s Mate Second Class. After graduating from Deep Sea Diving School April, 1955, his first assignment as a diver was aboard USS Petrel (ASR 14). In July, 1957, Byrd graduated from the elite Naval Underwater Swimmer School in Key West, Florida. One year later he became the first African American to complete Explosive Ordnance Disposal training.

Today’s Navy EOD operators honor the legacy of our ancestors by preparing for the anticipated threats and challenges in the era of the Great Power Competition. Navy EOD─comprised of elite, professional warfighters─is a lethal and resilient force that can be applied in contingency and crisis across the globe to eliminate explosive threats so the Fleet and Nation can fight and win─whenever, wherever, and however we choose.