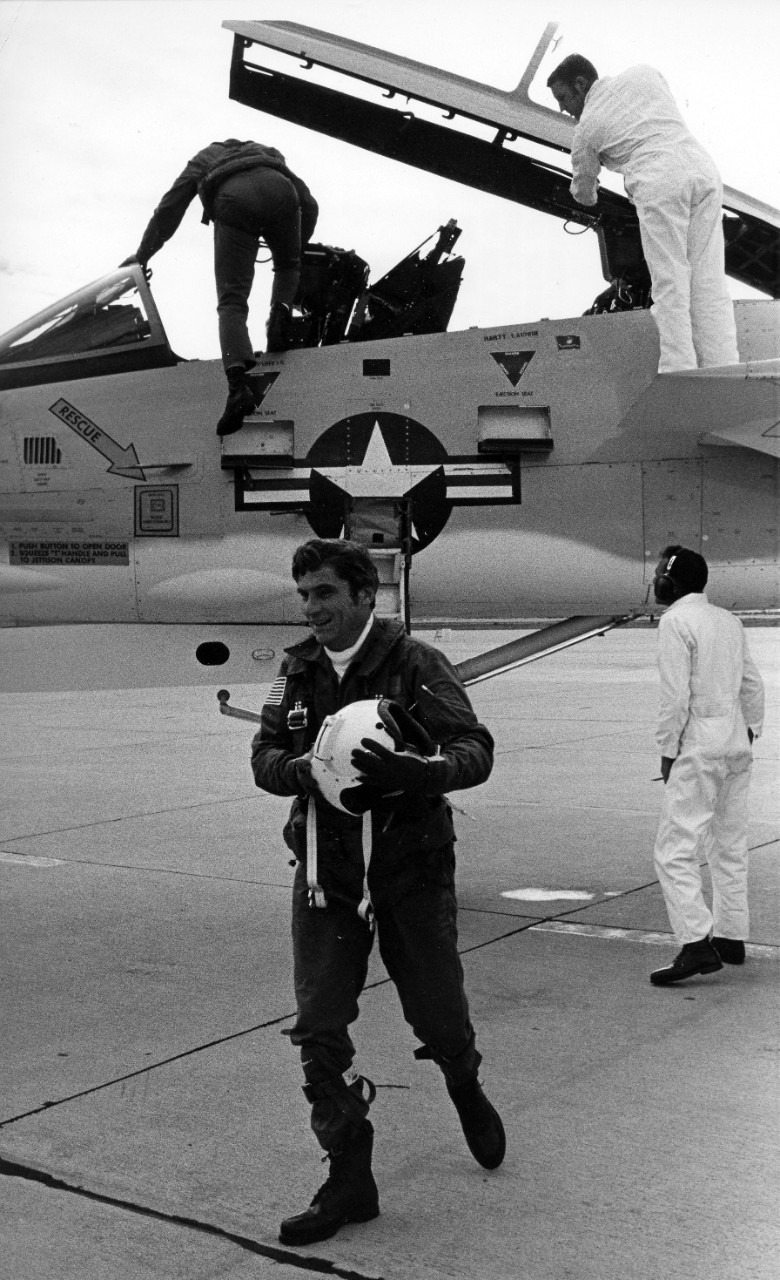 John Warner was born 18 February 1927 in Washington, D.C. He is the grandson of John William Warner and Mary Tinsley Warner of Amherst, Virginia. His father was Dr. John W. Warner, a physician who served as an Army doctor in World War I. His mother, Martha (Budd) Warner from St. Louis, Missouri, served as a Red Cross volunteer, helping the wounded who returned from France.

As a young man, Warner was at Griffith Stadium in Washington, D.C., when news began trickling in that the Japanese had attacked Pearl Harbor. In a 2005 interview with Naval Historical Foundation historian Dave Winkler, he stated that the ballgame’s announcer started to pass requests for generals and admirals in attendance to call their offices immediately. It wasn’t until after the Warner family left the stadium that they learned of the attack.

At the age of 17, Warner asked his parents for their permission to join the Marine Corps. His father refused, stating that after his experiences serving in muddy trenches in the Army in World War I, his son would only serve in the Navy or Army Air Forces.

Soon enough, John Warner enlisted in the Navy in late 1944. He boarded a train at Washington’s Union Station bound for Great Lakes Training Center. On VE-Day in May 1945, he was a student at electronics school. A captain asked the students to raise their hands if they didn’t drink. Not wanting to admit imbibing, he raised his hand and that’s when the captain shared that the war in Europe was over. He then assigned Warner and other non-drinkers to shore patrol in central Chicago to maintain order among the celebrating military personnel.

He left the Navy in July 1946 as an electronics technician’s mate third class and entered Washington and Lee University in Lexington, Virginia, in September 1946. He majored in general engineering courses, physics, and mathematics. During his senior year, Warned joined the Marine Corps Reserve and was commissioned as second lieutenant upon graduating from college in June 1949.

The following September, he entered the University of Virginia Law School. In October 1950, his law training was interrupted for a second tour of military service when he was called to active duty with the Marine Corps. After a tour of duty in Korea serving as communications officer for Marine Attack Squadron 121 (VMA-121) and later as communications officer for Marine Air Group 33 (MAG-33), he was released from active duty in April 1952. He attained the rank of captain and remained in the Marine Corps Reserve until 1961.

Graduating from law school in 1953, Warner was appointed law clerk to the Honorable E. Barrett Prettyman, former Chief Judge, U.S. Circuit Court of Appeals, District of Columbia Circuit. He was admitted to the Bar in April 1954, and following a brief period in private practice was appointed a special assistant to the U.S. Attorney in 1956. In 1957, he was appointed Assistant U.S. Attorney, Department of Justice. He served as a trial lawyer in the U.S. Attorney's office, Washington, D.C., until April 1960, when he joined the campaign staff of then–Vice President Richard M. Nixon.

In November 1960, Warner became associated with the law firm of Hogan & Hartson, and in 1964 was admitted to the firm as a general partner, specializing in corporate and banking law.

In addition to duties as Under Secretary of the Navy, Warner was given assignments representing the Department of Defense. On 15 July 1971, he was appointed director of ocean affairs, with the primary responsibility of representing the department in international affairs involving law of the sea. The President designated him head of the U.S. delegation that met in Moscow in October 1971 and again in Washington, D.C., in May 1972 to discuss incidents at sea between U.S. and Soviet naval units. Secretary Warner was a member of the Presidential party at the Moscow summit meeting and signed, on behalf of the U.S. government, the Agreement on the Prevention of Incidents on and over the High Seas between the United States and Soviet Union on 25 May 1972.

For his nearly four years of service as Under Secretary and then Secretary of the Navy, Mr. Warner received the Department of Defense Distinguished Public Service Medal on 10 January 1973 from then-Secretary of Defense Laird. A citation accompanying the medal, signed by Secretary Laird, stated in part:

...John W. Warner has provided superb leadership to the Department of the Navy during a difficult period of changing priorities, missions, and resources.... He has brought great energy, keen foresight, broad vision and expert managerial capacity to guiding the development of new naval forces and concepts...and to improving the management of weapons systems acquisition.... He has ably represented the Department of Defense in international law of the sea negotiations, and the President of the United States in negotiating an Executive Agreement on Incidents at Sea between the United States and the Soviet Union.

After Secretary Warner left the Department of the Navy, President Gerald Ford asked him to become administrator of the American Revolution Bicentennial Administration, the federal entity responsible for organizing commemorative events in 50 states and 22 foreign countries in 1976. Secretary Warner joined President Ford on the flight deck of the USS Forrestal initiating the ringing of the bicentennial bells (similar events are planned for the country’s 250th birthday in 2026).

In November 1978, Secretary Warner was elected as senator from the state of Virginia. He held this seat until 2009. Shortly before he retired, his fellow senators paid tribute to his service on the Senate floor. Senator James Webb reminisced about his decades-long friendship with the Virginian.

Senator Sheldon Whitehouse shared two sea stories in his tribute. His first referenced Secretary Warner’s passion and devotion to Navy Sailors: Every time he visited a ship, he insisted on talking with Sailors. He wanted the ground truth.

Senator Whitehouse also noted that Secretary Warner was frequently observed to be closing his eyes while talking during Senate hearings. Senator Whitehouse shared that the habit wasn’t one of disrespect. Rather, it was one of concentration and deliberation.

Five days after he retired from the Senate in 2009, Secretary of the Navy Donald Winter named a Virginia-class fast attack submarine after Senator Warner—USS John Warner (SSN-785). Commissioned in 2015, it was the first Virginia-class boat named after an individual. Warner’s stature and efforts on behalf of his beloved Navy were such that USS John Warner was only the 13th Navy ship named after a living person in the last century.

Upon his retirement from the Senate, Secretary Warner returned to Hogan Lovells (formerly Hogan Hartson) in 2010 as a senior adviser.

John Warner was a true American patriot who volunteered to serve in the U.S. Navy during World War II just as soon as he was old enough. As a Marine Corps officer in the Korean War, he volunteered to fly as a bomb-damage assessment observer over enemy territory. His tenure as Secretary of the Navy during a critical period in the Cold War was marked by a seminal agreement to reduce Cold War tensions with the Soviet Union—the U.S.–USSR incidents at sea agreement of 1972. He was an avid student of naval history and supporter of naval history programs. In his final years, he was a vocal leading advocate for a new National Museum of the U.S. Navy. We will truly miss him, but his legacy will live on.

Curator for the Navy