The announcement comes 76 years after the sinking of the vessels. The two protected crafts are LST 507 and LST 531, which were sunk by German E-boats in April 1944 during Exercise Tiger. Tiger was a training exercise aimed at preparing American and British troops for the Utah Beach assault forces. Several personnel were lost as a result of those attacks.

“The underwater remains of ships involved in the D-Day rehearsals are a tangible reminder of the sacrifices made in planning and delivering this huge military operation on a scale never previously attempted, 76 years ago,” Duncan Wilson, chief executive of Historic England said in a statement. “By protecting the wrecks of two United States landing ships we are remembering all of those who lost their lives in the struggle for liberty during the Second World War.” 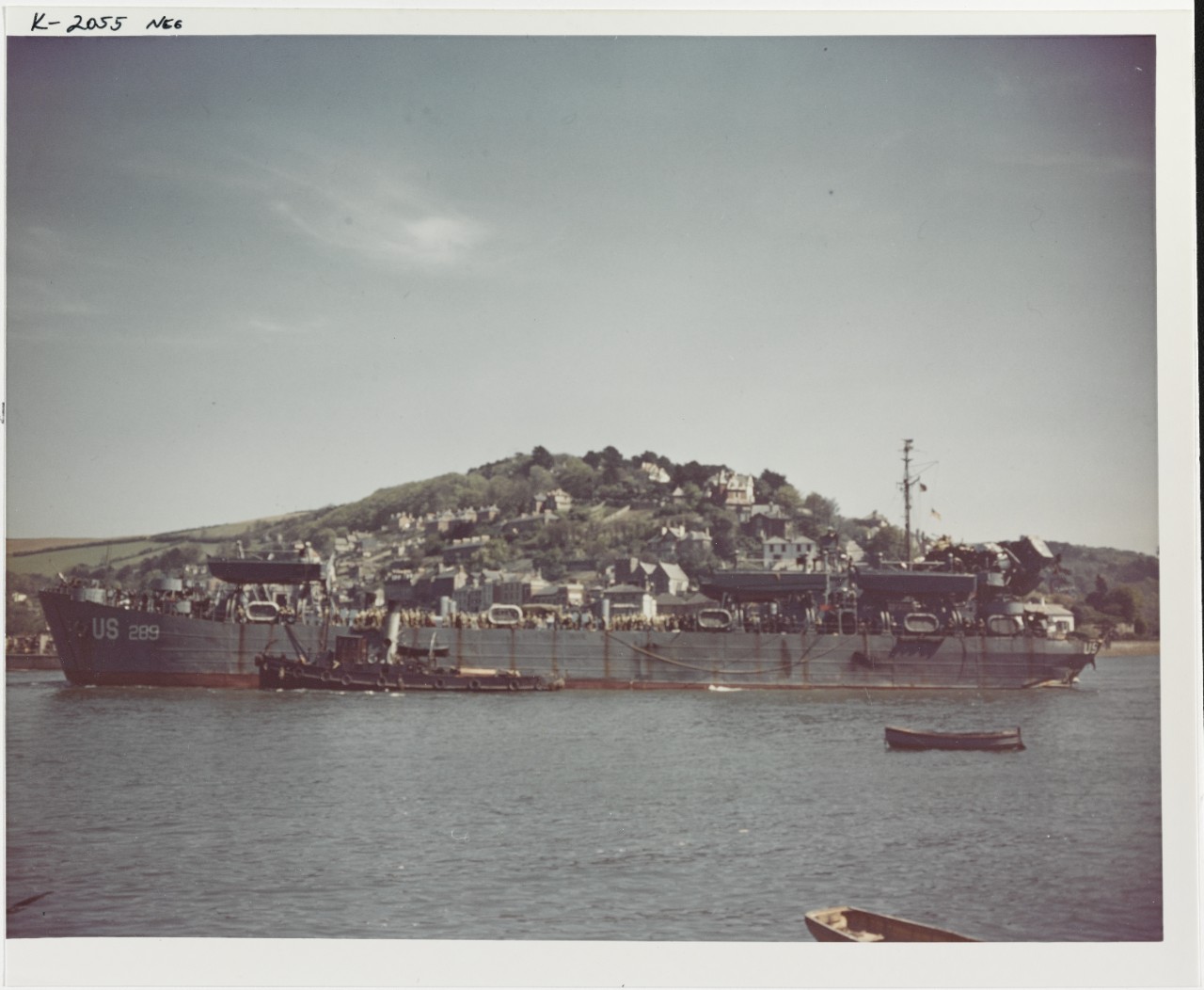 Name: 80-G-K-2055
Caption: LST-289. Arrives in Dartmouth Harbor, England, after being torpedoed in the stern by German MTBs during an invasion rehearsal off Slapton Sands, England, on 28 April 1944.

The forces for Exercise Tiger consisted of a convoy of two sections from two different ports. The Plymouth section, LST Group 32, was composed of LST-515, LST-496, LST-511, LST-531, and LST-58. The Brixham section consisted of LST-499, LST-289, and LST-507. The convoy joined with HMS Azalea as an escort. When the convoy was maneuvering in Lyme Bay in the early hours of April 28, they were attacked by nine German E-boats out of Cherbourg that had evaded the Allied patrols.

No warning of the presence of enemy boats had been received until LST-507 was torpedoed at approximately 2:00 am. The ship burst into flames, and survivors abandoned ship. Several minutes later LST-531 was torpedoed and sank in six minutes.

This brief action resulted in more than 600 dead. Additionally, to keep the Germans from possibly learning about the impending Normandy Invasion, casualty information on attack was not released until after the invasion.

“The work by Historic England in getting these sites protected by the UK government is vital in protecting these war graves from unauthorized disturbance,” said Dr. Robert Neyland, Naval History and Heritage Command’s Underwater Archeology branch head. “While these ships are protected under international and U.S. law, the fact that they reside in UK territorial waters and that the government has created additional safeguards ensures the safety and security of these historic sites, honoring our fallen service members and preserving their final resting place.”

As stewards of the Navy’s wreck sites, NHHC’s Underwater Archeology Branch maintains a geographic information system (GIS) and a database of over 2,500 ship and 15,000 aircraft wrecks distributed world-wide, whether submerged or on land. The Navy’s ship and aircraft wrecks represent a fragile collection of non-renewable resources that, in addition to their historical value, are often considered war graves, may contain unexploded ordnance, state secrets, or environmental hazards. To ensure preservation of these sites, the UAB develops, coordinates, reviews, and implements related policy.

To learn more about the history of Exercise Tiger: https://www.history.navy.mil/content/history/nhhc/browse-by-topic/wars-conflicts-and-operations/world-war-ii/1944/exercise-tiger.html 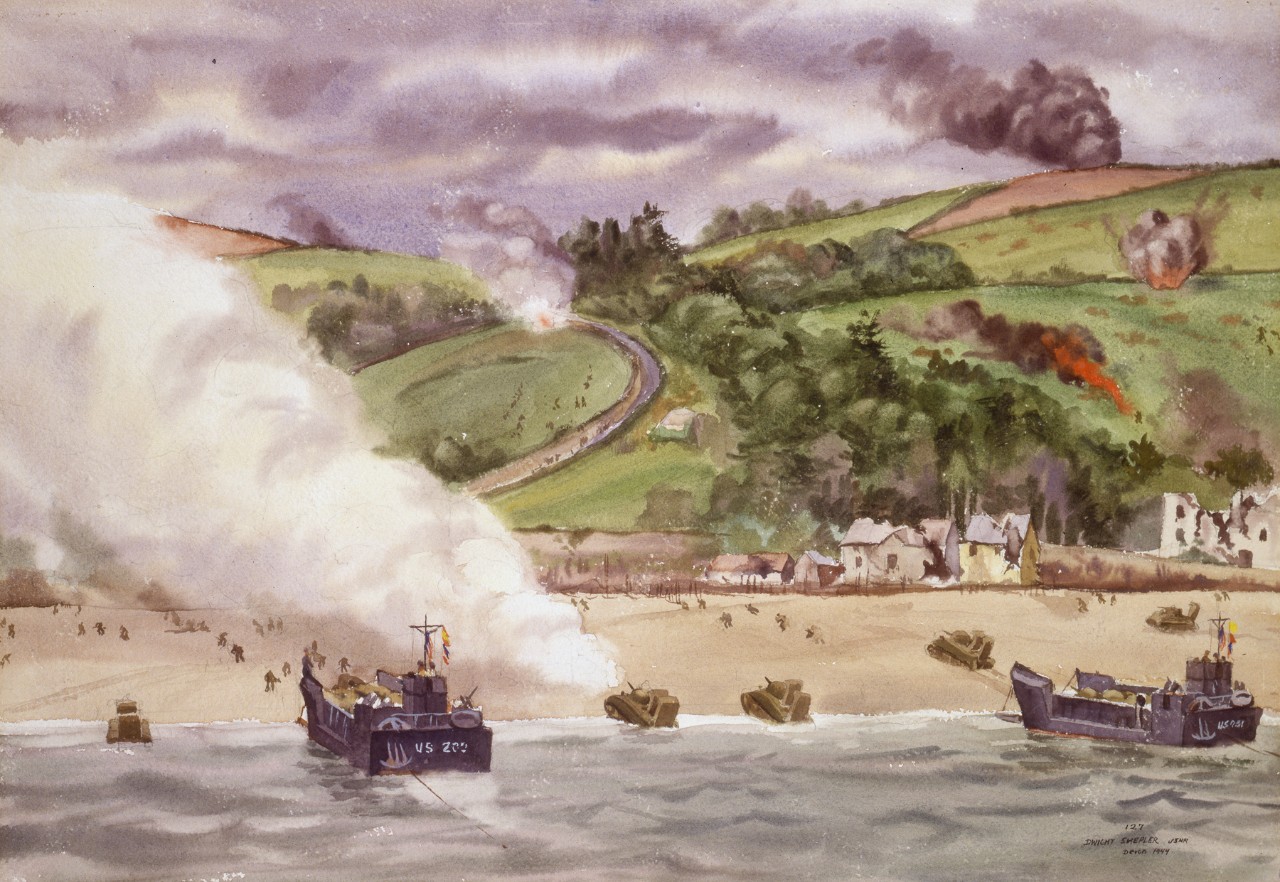 Title: Attack on Slapton Sands
Caption: Painting, Watercolor on Paper; by Dwight C. Shepler; 1944; The long beach at Slapton and its evacuated hinterland was the great practice ground for the invasion of Europe. During many months U.S. forces attacked with heavy bombardment and live ammunition in large-scale maneuvers. The first wave penetrated into the hills, where flame-throwers and demolitions were used. A support wave landed tanks and equipment from LCTs, and engineers set off a smoke screen for cover. Tanks stayed at the water’s edge to give support fire until land mines were cleared. The battered manor house and farm buildings were pathetic reminders of evacuated civilian residents.
Topic
Document Type
Wars & Conflicts
Navy Communities
File Formats
Location of Archival Materials