The National Museum of the U.S. Navy commemorated the 60th anniversary of the U.S. Navy’s bathyscaphe Trieste’s historic dive to the Mariana Trench, Jan. 23, at the Washington Navy Yard.

WASHINGTON NAVY YARD –The National Museum of the U.S. Navy commemorated the 60th anniversary of the U.S. Navy’s bathyscaphe Trieste’s historic dive to the Mariana Trench, Jan. 23, at the Washington Navy Yard.

In addition to the commemoration ceremony, the museum also unveiled its new Trieste exhibit, in honor of the anniversary.

Trieste made history Jan. 23, 1960, when then Lt. Don Walsh and Jacques Piccard descended seven miles to the Challenger Deep – located at the southern end of the Mariana Trench – the deepest known point of the Earth’s oceans.

Retired Capt. Don Walsh, PhD, who commanded Trieste during her 36,000-foot, nine-hour deep dive, spoke at the commemoration and shared his thoughts about how far deep diving has come today.

“We just barely made it in a very long week period just to make this one dive over 60 years ago; now Victor Vescovo with his two person submarine called Limiting Factor, did it four times in eight days,” said Walsh. “This tells you how far we’ve come in six decades, with the reliability, safety, and efficiency of the system.”

Retired Rear Adm. Samuel Cox, director of NHHC, pointed out that Walsh’s contribution to the Navy didn’t end with the Trieste and that he went on to serve as the executive officer of USS Bugara (SS 331) and commanding officer of USS Bashaw (SS 241).

“Mr. Don Walsh has had an extraordinary career,” said Cox. “After getting out of the Navy, his service to our nation and frankly, to the world, has been extraordinary as a leader of ocean engineering, deep sea diving and all manner of underwater activity.”

Capt. Matt Farr, executive officer at Office of Naval Research (ONR) Global, shared how honored he was to be a part the ceremony and counted it a privilege to sit in the presence of some of his heroes.

“It’s exciting to be a part of this event and to be in such amazing company; there is an incredible amount of naval history here,” said Farr. “This achievement is worthy of remembrance and celebration because of its historical significance; we (ONR) consider it a part of our history too.”

In early 1980, the bathyscaphe was transported to the Washington Navy Yard, where the vessel was placed and remains on display today.

Naval History and Heritage Command, located at the Washington Navy Yard, is responsible for the preservation, analysis, and dissemination of U.S. naval history and heritage. It provides the knowledge foundation for the Navy by maintaining historically relevant resources and products that reflect the Navy's unique and enduring contributions through our nation's history, and supports the fleet by assisting with and delivering professional research, analysis, and interpretive services. NHHC is composed of many activities including the Navy Department Library, the Navy Operational Archives, the Navy art and artifact collections, underwater archeology, Navy histories, 10 museums, USS Constitution repair facility and the historic ship Nautilus. 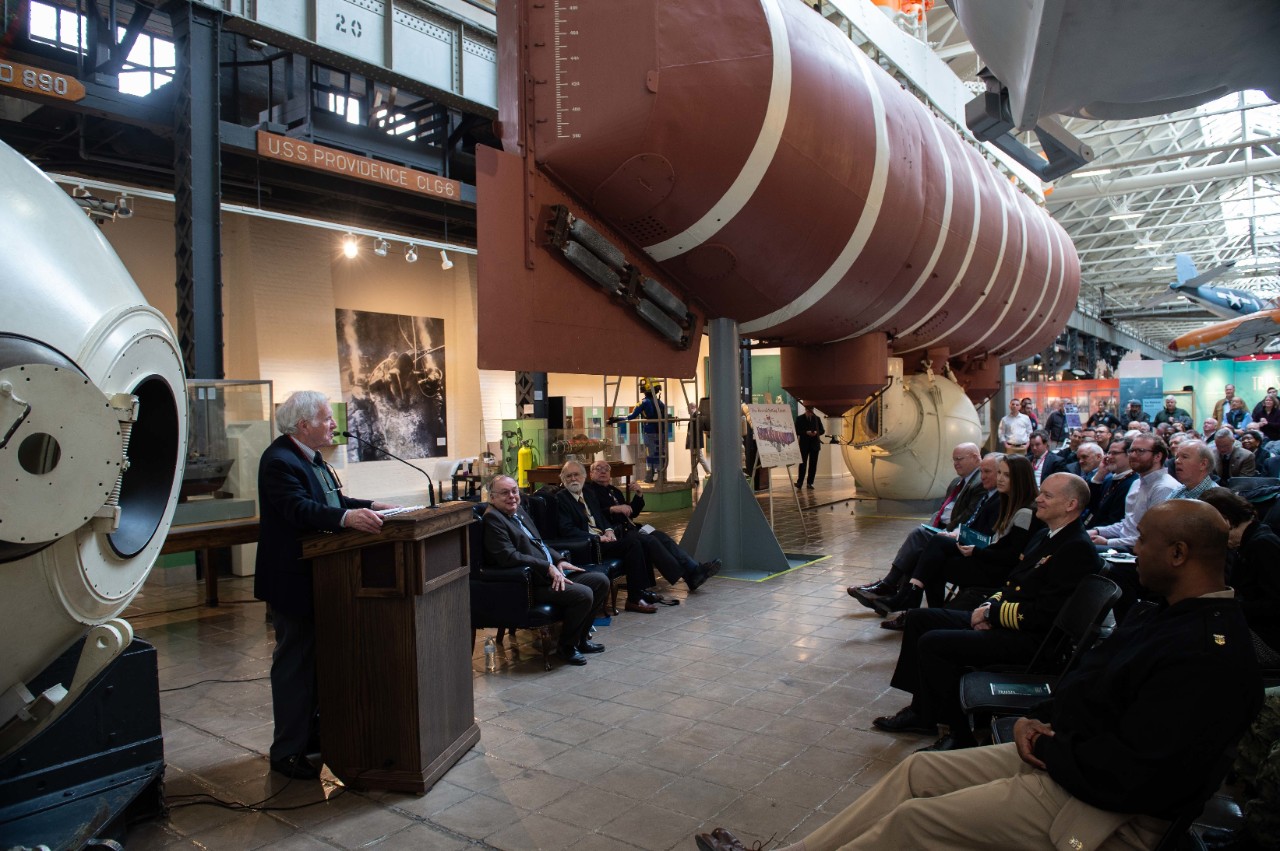