More than 1,000 guests came together at the Arlington National Cemetery Memorial Amphitheater Sept. 26 for a memorial dedication ceremony to honor the 129 men lost aboard USS Thresher (SSN-593). 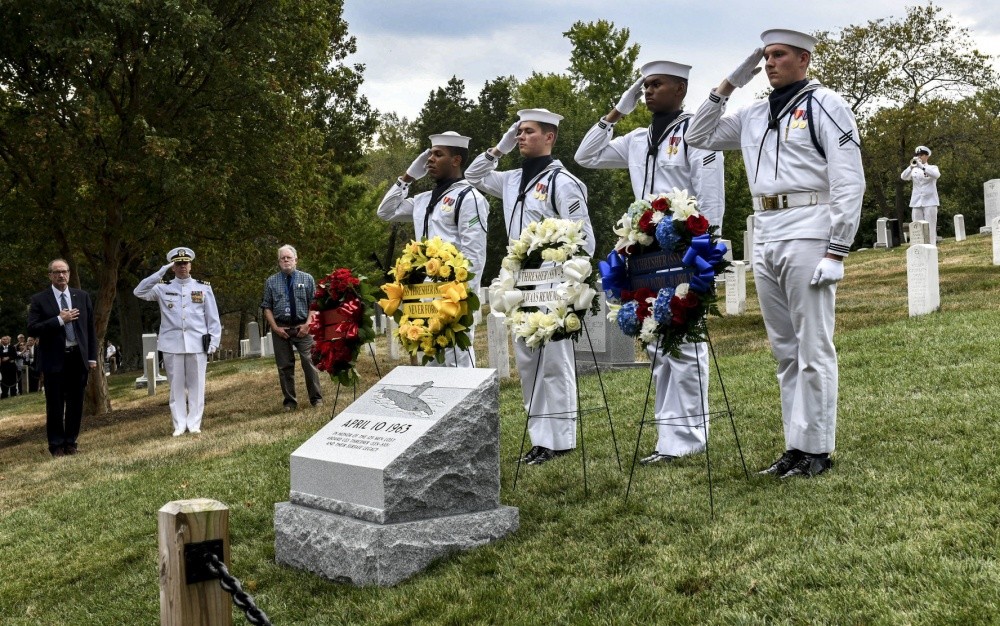 Sailors, currently assigned to the Ceremonial Guard, salute as Taps is played during a wreath laying ceremony placed at USS Thresher (SSN-593) Commemorative Monument in Arlington National Cemetery. The monument commemorates the service and sacrifice of the crew. Thresher sank during deep-diving tests off the coast of Massachusetts, April 10, 1963, killing all 129 personnel aboard: 16 officers, 96 enlisted Sailors and 17 civilian technicians. It was the deadliest accident in submarine history, leading the Navy to establish the SUBSAFE Submarine Safety Program. (U.S. Navy photo by Mass Communication Specialist 2nd Class (SW/AW) Mutis A. Capizzi/RELEASED).

More than 1,000 guests came together at the Arlington National Cemetery Memorial Amphitheater Sept. 26 for a memorial dedication ceremony to honor the 129 men lost aboard USS Thresher (SSN-593).

Organized by the Thresher Memorial Foundation, the memorial is a polished slant-faced stone that has an engraved image of Thresher with the following inscription: “April 10 1963, In Honor of the 129 Men Lost Aboard USS Thresher (SSN-593) and Their SUBSAFE Legacy.” The memorial is located on the Roosevelt Drive walkway that runs between the Arlington National Cemetery Welcome Center and the Tomb of the Unknown Soldier Memorial.

“I am very humbled and privileged to stand here before you as a Thresher family member,” said Wiley. “Lt. j.g. John J. Wiley graduated with distinction in 1961 from the U.S. Naval Academy and was on the Thresher. He was my older brother, my role model and my hero. The nation lost 129 men defending our country during the Cold War challenges of that period. The placement of the memorial in Arlington National Cemetery is a momentous achievement.”

“All of the family members of the crew who are here with us…it is important to remember that your relatives did not die in vain,” said Shaheen. “Their sacrifice will now rightfully be memorialized at our nation’s most hallowed grounds beside tributes here to generations of fallen heroes.”

Richardson remarked on the excitement that the crew of Thresher must have started the day with as they embarked on sea trials, adding that no one could have known that a day that began with so much hope would finish with so much sadness and despair.

“Many of us here today have taken an oath to support and defend the constitution of the United States against all enemies, foreign and domestic,” said Richardson. “This oath is what binds us together; it binds us through time, it binds us together around the world. Time has shown, over and over, that it is impossible to predict ─ and partly comprehend ─ what our oath of office may require from us on any given day. Indeed, these men and their families would pay the ultimate price for their dedication to our constitution and the nation that it guides.”

Richardson went on to say that having this new memorial at Arlington National Cemetery answers the challenge of how best to honor the dedication and sacrifice of these men and their families; by providing a place we can come and remember, meditate and pay homage to their legacy.

Thresher was officially declared lost in April 1963. In the aftermath of the loss, while investigations, design reviews and testimony to congress were in progress, the SUBSAFE Program was created in June 1963.

The purpose of the SUBSAFE Program is to provide maximum reasonable assurance of watertight integrity and recovery capability of a submarine. A culture of safety is central to the entire Navy submarine community. The program clearly defines non-negotiable requirements, requires annual training of personnel and then ensures compliance with reviews including audits and independent oversight. The annual training requirement includes review of past failures, including the loss of Thresher. The SUBSAFE Program is the legacy of those lost on Thresher, and it has made a lasting significant contribution to the submarine force, the Navy and the nation.

The USS Thresher Arlington National Cemetery Memorial Foundation is a non-profit, non-governmental organization created to realize the mission of erecting a commemorative monument to perpetuate the memories of the men lost aboard USS Thresher.

The Naval History and Heritage Command, located at the Washington Navy Yard, is responsible for the preservation, analysis and dissemination of U.S. naval history and heritage. It provides the knowledge foundation for the Navy by maintaining historically relevant resources and products that reflect the Navy's unique and enduring contributions through our nation's history, and supports the fleet by assisting with and delivering professional research, analysis and interpretive services. NHHC is composed of many activities, including the Navy Department Library, the Navy Operational Archives, the Navy art and artifact collections, underwater archeology, Navy histories, nine museums, USS Constitution repair facility and the historic ship Nautilus. 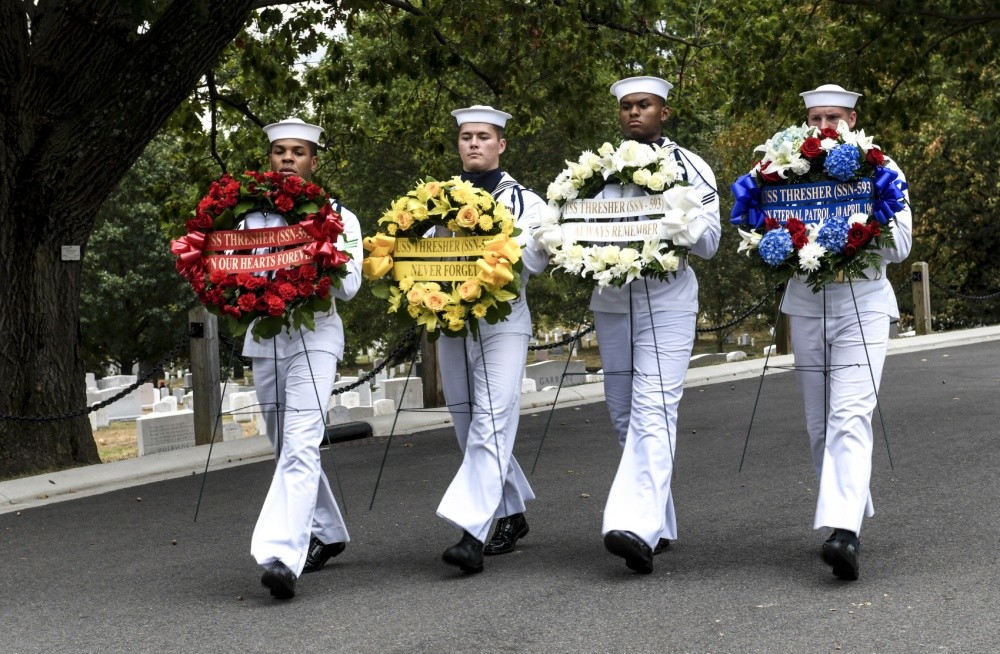