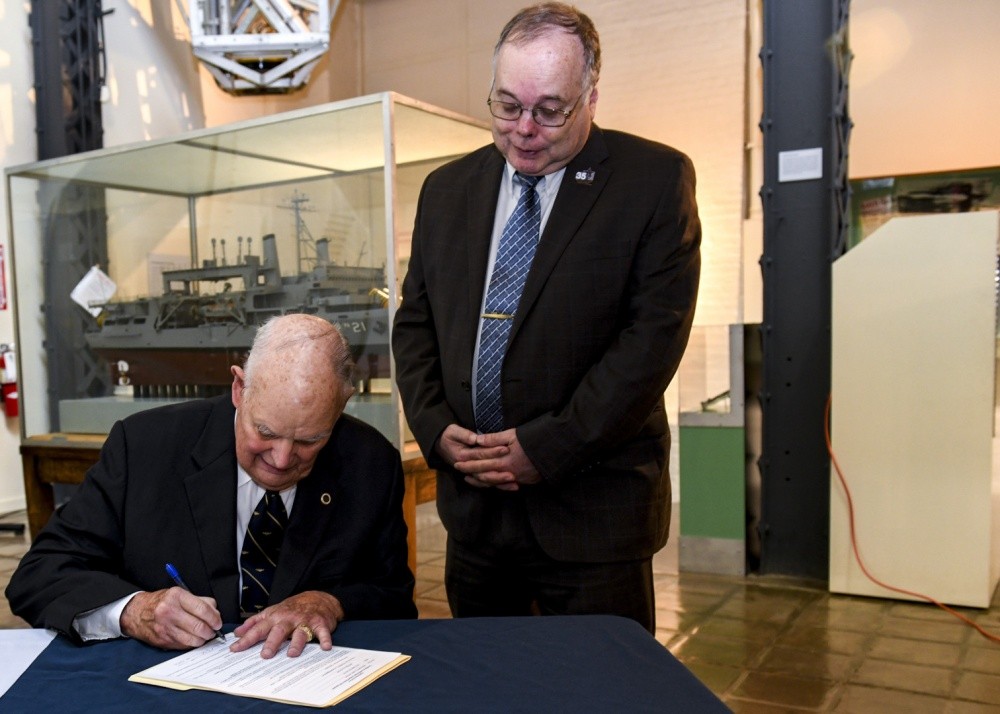 The items included a tablecloth signed by crewmembers, as well as a plaque, bedsheet and a print of Scorpion, all given to Fountain by the Scorpion crew on his departure from the submarine in 1968, six months before Scorpion's tragic loss.

Fountain served as the Scorpion's executive officer from 1965 to 1968 and completed two successful deployments to the North Atlantic and Arctic Oceans as well as a variety of local operations. In January 1968, Fountain was selected early for promotion and left Scorpion for the Bureau of Naval Personnel, Plans and Policy Branch, for Nuclear Power trained enlisted personnel, surface and submarine. In February 1968, Scorpion set out to sea for a Mediterranean deployment and by May, the submarine headed home and reported her last position approximately 50 miles south of the Azores. Six days later she was reported overdue at her homeport of Norfolk, Va. After a massive search from Navy, Coast Guard, and Air Force assets, Scorpion was declared "presumed lost" with all hands in June 1968. A court of inquiry convened but did not determine the cause of her loss.

Director Naval History and Heritage Command, retired Rear Admiral Samuel Cox said that while there are several artifacts currently on display in the NMUSN, none of the current Scorpion collection has the emotionally powerful effect that the Fountain donation provides. Cox reminded guests, however, that the loss of Thresher in 1963 and Scorpion in 1968 led to the development of the SUBSAFE Program, which was a very rigorous process for analyzing and making sure that U.S. submarines were as safe as possible. As a result, 50 years since the loss of Scorpion, the United States has not lost a submarine. 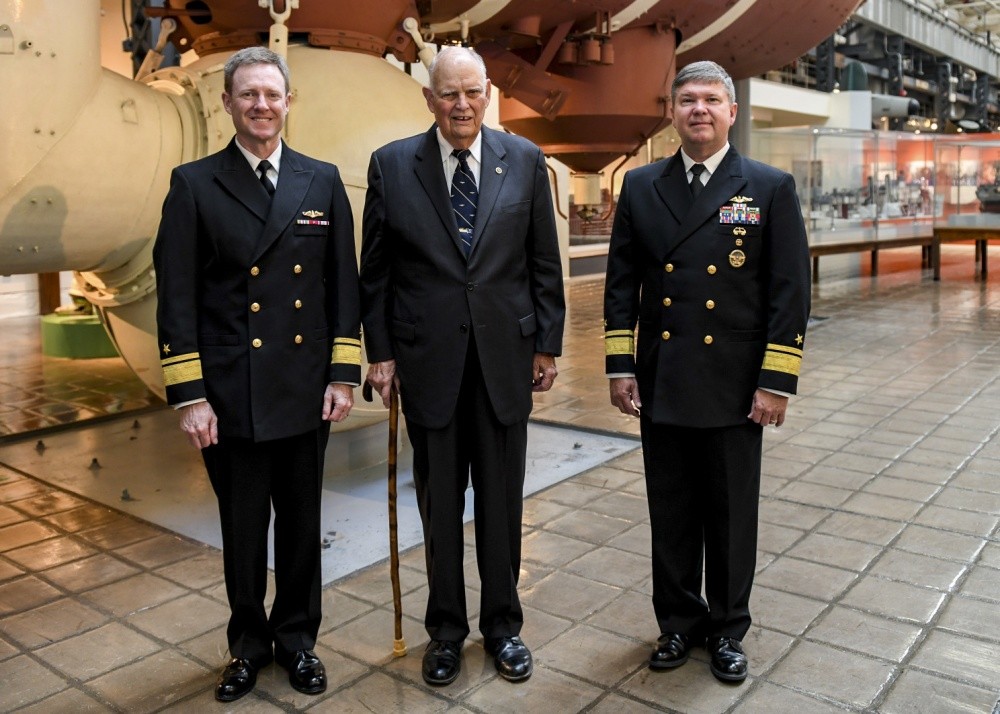 WASHINGTON NAVY YARD (Oct. 15, 2019) (Pictured from left to right) Rear Admiral Andrew Lennon, vice director, Navy Staff, Office of the Chief of Naval Operations; retired Rear Admiral Robert Fountain, former executive officer USS Scorpion (SSN-589); and Rear Admiral Thomas Ishee, director, Undersea Warfare Division Office of the Chief of Naval Operations, pose for a photo at the National Museum of the U.S. Navy Oct 15, following a donation ceremony. Naval History and Heritage Command held the ceremony to unveil four artifacts from Scorpion donated by Fountain. Fountain received the artifacts from the crew in 1968 on his departure from Scorpion; six months before the submarine was declared “presumed lost.” NHHC is located at the Washington Navy Yard and is responsible for the preservation, analysis, and dissemination of U.S. naval history and heritage. (U.S. Navy photo by Mass Communication Specialist 2nd Class (SW/AW) Mutis A. Capizzi/Released)

"It is a privilege for me to be here and I especially want to thank Admiral Fountain in particular for his incredibly kind and generous donation with this artifact [signed tablecloth]," said Cox. "When I first read about it, I got choked up just thinking about it. This is a particularly moving and important artifact that adds to our significant understanding of what happened in the Scorpion and more importantly her crew."

Director, Undersea Warfare Division Office of the Chief of Naval Operations (N97) Rear Admiral Thomas E. Ishee spoke at the ceremony and said that institutions like NHHC provide a place where people can view historical artifacts and can come together to remember those brave souls lost to the deep. He added that it is imperative that future generations have a place to learn about these sacrifices and the Navy can pass on lessons learned so they are not repeated.

"A few weeks ago, I had the honor of attending a memorial for USS Thresher in Arlington National Cemetery and former Chief of Naval Operations John Richardson articulated how the loss of a submarine crew touches our lives," said Ishee. "You recognize, and I quote, the loss of a submarine crew brings with it unique aspects, unique challenges that make it very hard to bring closure' end quote. Our responsibility then is determining how to best honor those men who sacrificed their lives in May of 1968 and service to their country."

The National Museum of the U.S. Navy was established in 1961 and opened to the public in 1963. As one of 10 U.S. Navy museums throughout the country, it is the only one that presents an overview of U.S. naval history.

Naval History and Heritage Command, located at the Washington Navy Yard, is responsible for the preservation, analysis, and dissemination of U.S. naval history and heritage. It provides the knowledge foundation for the Navy by maintaining historically relevant resources and products that reflect the Navy's unique and enduring contributions through our nation's history and supports the fleet by assisting with and delivering professional research, analysis, and interpretive services. NHHC is composed of many activities including the Navy Department Library, the Navy Operational Archives, the Navy art and artifact collections, underwater archeology, Navy histories, nine museums, USS Constitution repair facility and the historic ship Nautilus.

For more news and information from Naval History and Heritage Command, visit www.history.navy.mil. 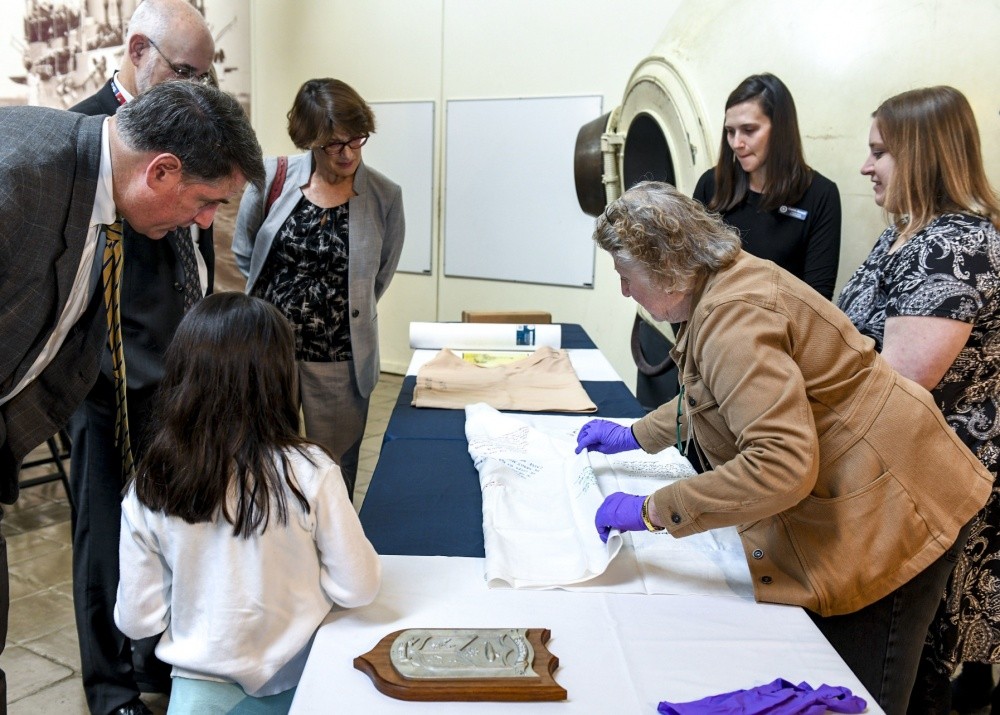 WASHINGTON NAVY YARD (Oct. 15, 2019) Lea Davis, associate registrar for acquisitions at Naval History and Heritage Command (NHHC), tells vistors at the National Museum of the U.S. Navy about an artifact from USS Scorpion (SSN-589) during a donation ceremony. Naval History and Heritage Command (NHHC) the ceremony to unveil four artifacts from Scorpion, donated by retired Rear Admiral Robert Fountain, former executive officer of the submarine. Fountain received the artifacts from the crew in 1968 on his departure from Scorpion; six months before the submarine was declared “presumed lost.” NHHC, located at the Washington Navy Yard, is responsible for the preservation, analysis, and dissemination of U.S. naval history and heritage. (U.S. Navy photo by Mass Communication Specialist 2nd Class (SW/AW) Mutis A. Capizzi/Released)