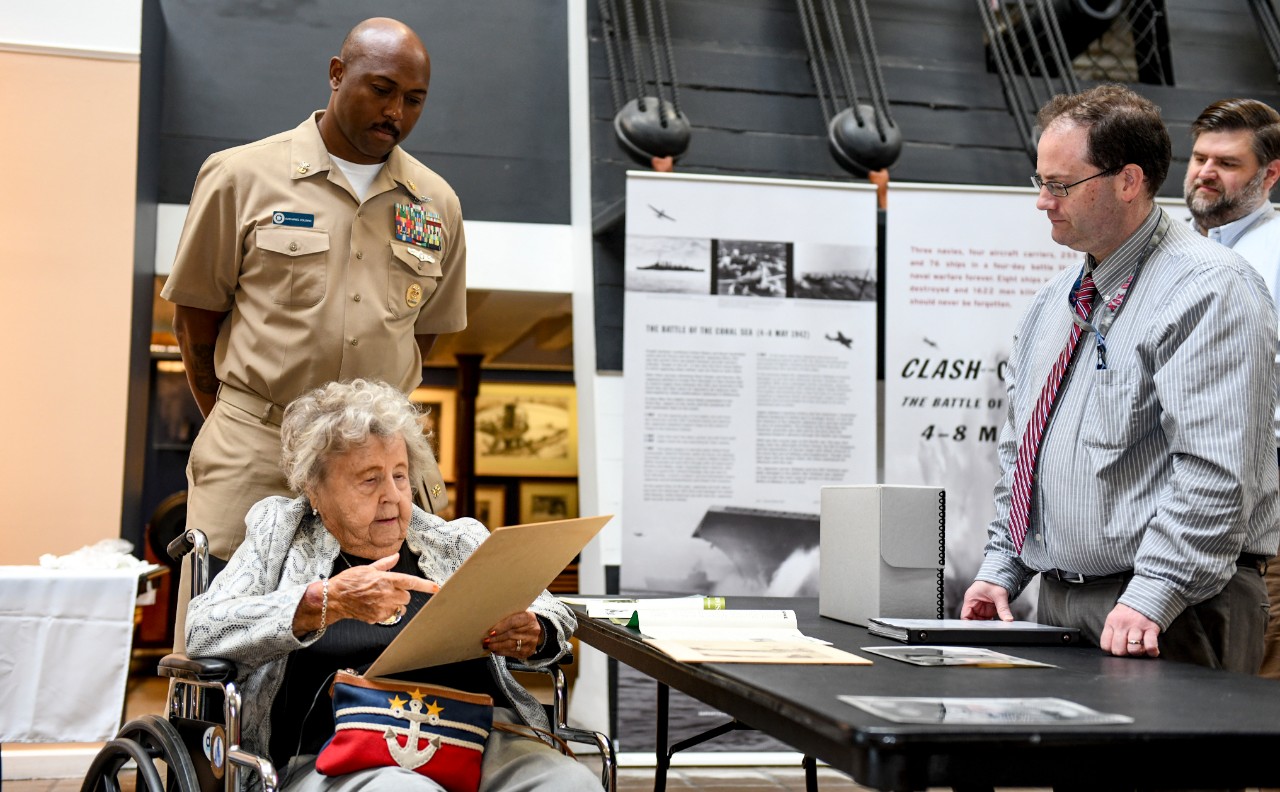 The tour gave Black a chance to see pieces from NHHC’s expansive collection, including uniforms and memorabilia from her husband’s service as well as her own time in service. It also allowed NHHC staff the opportunity to learn more about Black and her effect on the Navy’s history.

“I looked up and saw a woman standing there and her uniform was just so white,” said Black. “That Navy recruiter looked at me and said, ‘You know you can wear a uniform just like that?’ and when he said that, there were stars that went off inside my head and I knew that was my ticket to see the world.”

Black went on to say that she knew there was a big world to see outside of the drugstore she worked at in Alabama and took the opportunity to enlist in WAVES where she rose to the rank of seaman first class storekeeper.

President Franklin D. Roosevelt signed into law the establishment of the WAVES on July 30, 1942. Establishing the WAVES was a lengthy effort, but just one year later in July 1943, 27,000 women wore the WAVES uniform.

While serving in the WAVES, Black also met her husband, Delbert Black, who would later go on to be the first MCPON in 1967 and would hold the post until 1971. They were married for 50 years until the former MCPON died in 2001. Ima Black is credited with giving MCPON Black a resounding “Yes” when he asked her if he should put in an application for the job.

Naval History and Heritage Command, located at the Washington Navy Yard, is responsible for the preservation, analysis, and dissemination of U.S. naval history and heritage. It provides the knowledge foundation for the Navy by maintaining historically relevant resources and products that reflect the Navy's unique and enduring contributions through our nation's history, and supports the fleet by assisting with and delivering professional research, analysis, and interpretive services. NHHC is composed of many activities including the Navy Department Library, the Navy Operational Archives, the Navy art and artifact collections, underwater archeology, Navy histories, nine museums, USS Constitution repair facility, and the historic ship Nautilus.

To learn more about Ima Black and the first Master Chief Petty Officer of the Navy visit: https://www.history.navy.mil/content/history/nhhc/browse-by-topic/people/master-chief-petty-officers/black-bio/black.html