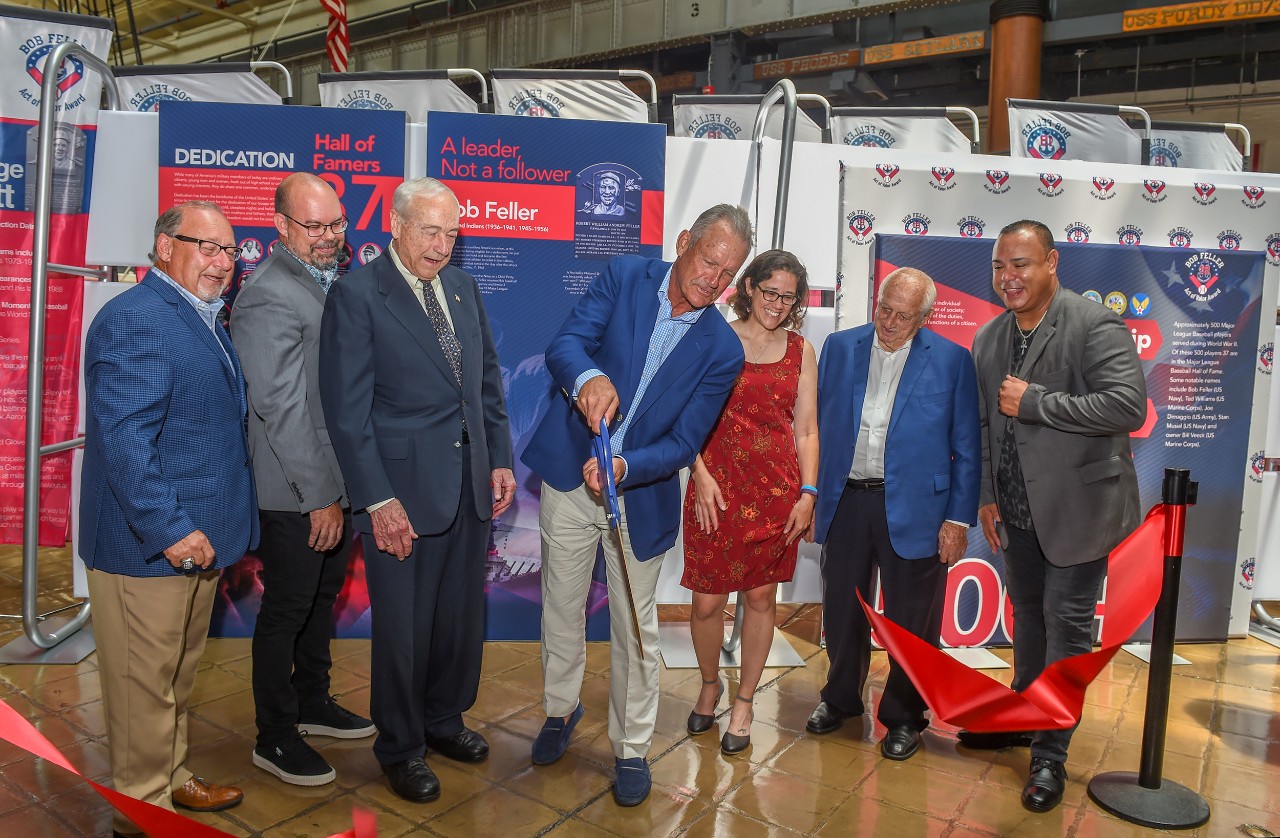 Description: 180716-N-GK939-0002 (July 16, 2018). George Brett, National Baseball Hall of Famer, center; former Secretary of the Navy, the Honorable John H. Dalton, third from left; and members of the Bob Feller Act of Valor Foundation, cut a ribbon during a ceremony for the Bob Feller Act of Valor Foundation's launch of its traveling educational exhibit at the National Museum of the United States Navy (NMUSN). The traveling exhibit is displayed in the NMUSN and is alongside the museum's recently opened exhibit, "Playball – Navy and the National Pastime," which highlights the history of baseball and the U.S. Navy. (U.S. Navy photo by Mass Communication Specialist 2nd Class Lindsay A. Preston/Released)

While many know Bob Feller as a Major League Baseball (MLB) pitcher, he also served as the first active professional athlete to enlist in the United States Navy (USN) just days after the attack on Pearl Harbor in 1941. Feller served on missions in both the Pacific and the North Atlantic and earned the rank of chief petty officer along with six campaign ribbons and eight battle stars.

“Bob Feller is a notable example of the Major League Baseball players who wanted to serve their country by giving up time in their valuable careers and joining the military,” said Mark Weber, Director of the NMUSN. “He was going to sign his contract when he heard on the car radio that Pearl Harbor had been bombed and he changed direction and joined the Navy.”

The traveling exhibit is designed to educate the public, specifically focusing on the youth of today, on the qualities of the World War II generation that still have relevance. Its goal is to provide inspiration through the timeless importance of service, citizenship, sacrifice, and legacy demonstrated by those who served in World War II, including the 37 baseball Hall of Famers and more than 500 MLB players.

The traveling exhibit is displayed in the NMUSN and is alongside the museum’s recently opened exhibit, “Playball – Navy and the National Pastime,” which highlights the history of baseball and the USN.

“We wanted to honor the connections between Navy and baseball in support of the upcoming All-Star game this week at National’s park,” said Weber. “We felt that there was a rich tradition where baseball has had a long standing connection with the Navy.”

The Bob Feller Act of Valor Foundation was established in 2013 to annually recognize eight recipients; one baseball Hall of Famer, one current Major League Baseball (MLB) player, one U.S. Navy chief petty officer, two Peer-to-Peer Mentoring awards (one afloat command and one ashore command), a member of the United States Marine Corps, and two military children whose parents serve and are winners of an essay contest written about one of the 37 Hall of Famers who served in WWII.

“The Foundation is honored and delighted to launch our strong educational initiative today to the younger generation,” said Peter Fertig, President of the Bob Feller Act of Valor Foundation. “We are especially excited to be a part of the National Museum of the United States Navy’s recently opened exhibit, ‘Playball – Navy and the National Pastime.’ It is this very strong connection between Major League Baseball and the United States military that we honor their incredible service and sacrifice which has led to their legacy they left behind for these unbelievable Major League Baseball All Stars.”

The traveling exhibit will be displayed until the end of August.

“Playball – Navy and the National Pastime” will be open until April 2019 at the NMUSN located at the Washington Navy Yard. For museum access, please visit www.history.navy.mil/nmusn.