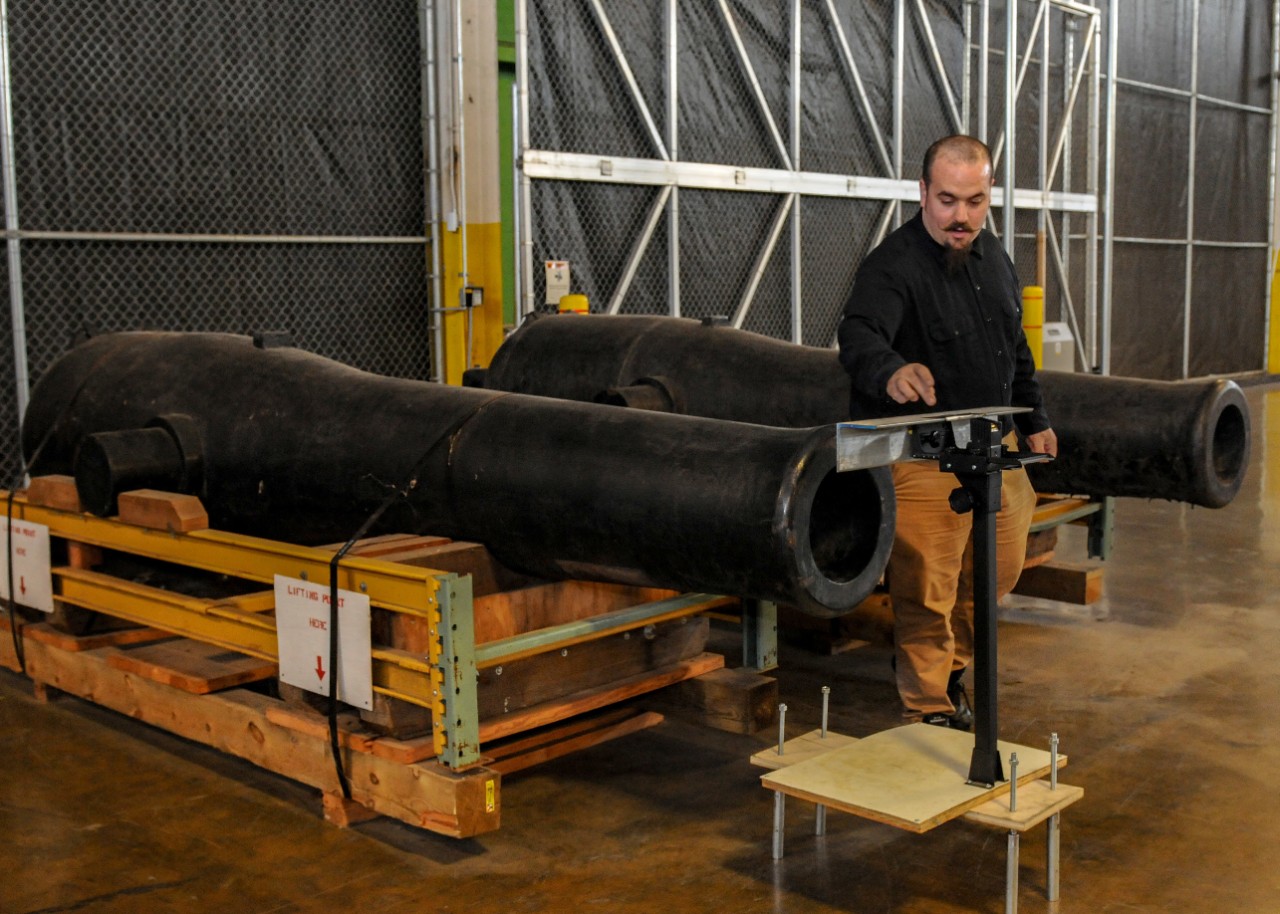 Description: 181023-N-HP188-0031 RICHMOND, Va. (October 23, 2018) Erik Farrell, an archaeological conservator from the Mariners’ Museum and Park located in Newport News, works with a device to collect measurement data from a Dahlgren smoothbore shell gun from Kearsarge I (Sloop-of-War) during a visit to the Collection Management Facility (CMF). The Curator Branch of Naval History and Heritage Command (NHHC) relocated artifacts stored in separate facilities in Washington, DC; Virginia and Tennessee to the CMF in 2014. (U.S. Navy photo by Mass Communication Specialist 2nd Class Mutis A. Capizzi/RELEASED)

“Water connects us all.” That is the message from Howard Hoege III, president of the Mariners’ Museum and Park located in Newport News to visitors that come to the 90,000 square foot gallery that includes the award-winning USS Monitor Center.

The state-of-the-art exhibition and conservation lab houses 210 tons of artifacts from the Civil War Ironclad Monitor, which were recovered from the National Oceanic and Atmospheric Administration’s (NOAA) Monitor National Marine Sanctuary. In 2002, two XI-inch Dahlgren, smooth-bore shell guns that weigh nearly nine tons each were added to the collection.

As part of the conservation process, Erik Farrell, a member of the archaeological conservation team assigned to the guns along with Hannah Fleming and Will Hoffman, connected with the Naval History and Heritage Command’s Curator Branch and arranged a visit to the branch’s Collection Management Facility (CMF) Oct. 23. The CMF houses a set of Dahlgren guns from the 19th century sloop of war Kearsarge from which Farrell and his team gathered measurement data to aid in the ongoing conservation of the Monitor guns.

“There is concretion all along the bore which we are going to have to take out,” said Farrell. “We need really accurate dimensions of the interior bore which we can’t get off of our guns until after they are cleaned. Ideally, we wanted to check an actual historical example first. This one [Dahlgren] from the Kearsarge is from the same foundry as the one from the Monitor; it is pretty much the most exact parallel we could get to check to see what we need to do.” 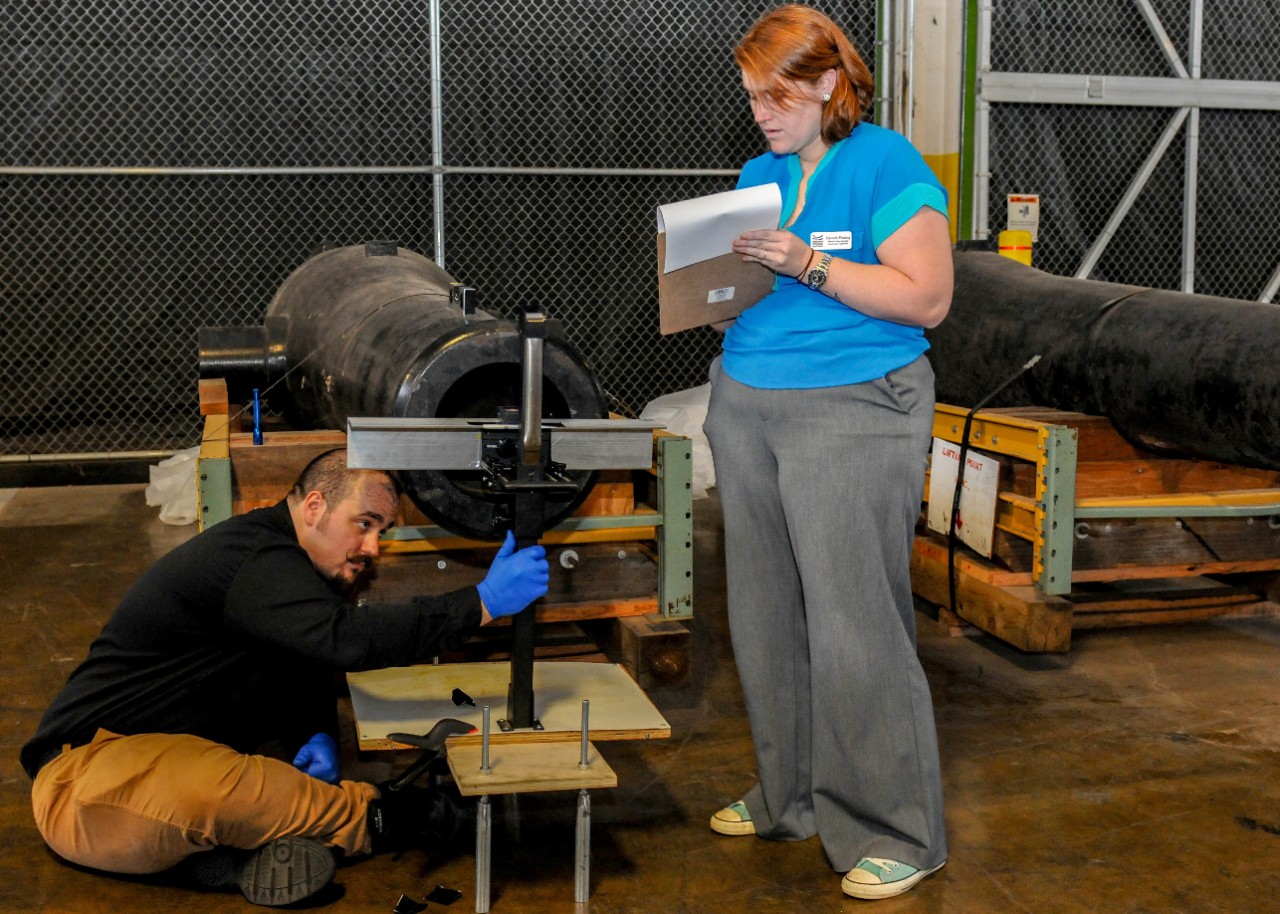 Farrell explained that the Kearsarge guns will allow the Mariners’ Museum team to create coring drills of different sizes. By taking measurements of the Kearsarge guns, the drills can be made to exact sizes, which is especially important as they drill toward the back of the gun since the shape of the opening starts to change as you move further inside the gun. Even though there are diagrams of the Dahlgren guns available, a physical representation makes a better foundation for the work to be done.

NHHC Curator Branch Head Jeff Bowdoin shared his excitement at the chance to collaborate with Farrell and his team on the USS Monitor project. He said it was an excellent opportunity for the CMFs curatorial staff to showcase their professionalism and knowledge while interacting with a non-government agency in a joint effort to preserve naval history.

“The visit was not only a great opportunity for the Mariners’ Museum, it also afforded NHHC’s Curator Branch an opportunity to share a part of our collection with fellow history professionals,” said Bowdoin. “We believe it will have a direct, positive affect on the outcome of the effort to preserve artifacts from one of history’s earliest ironclad warships.” 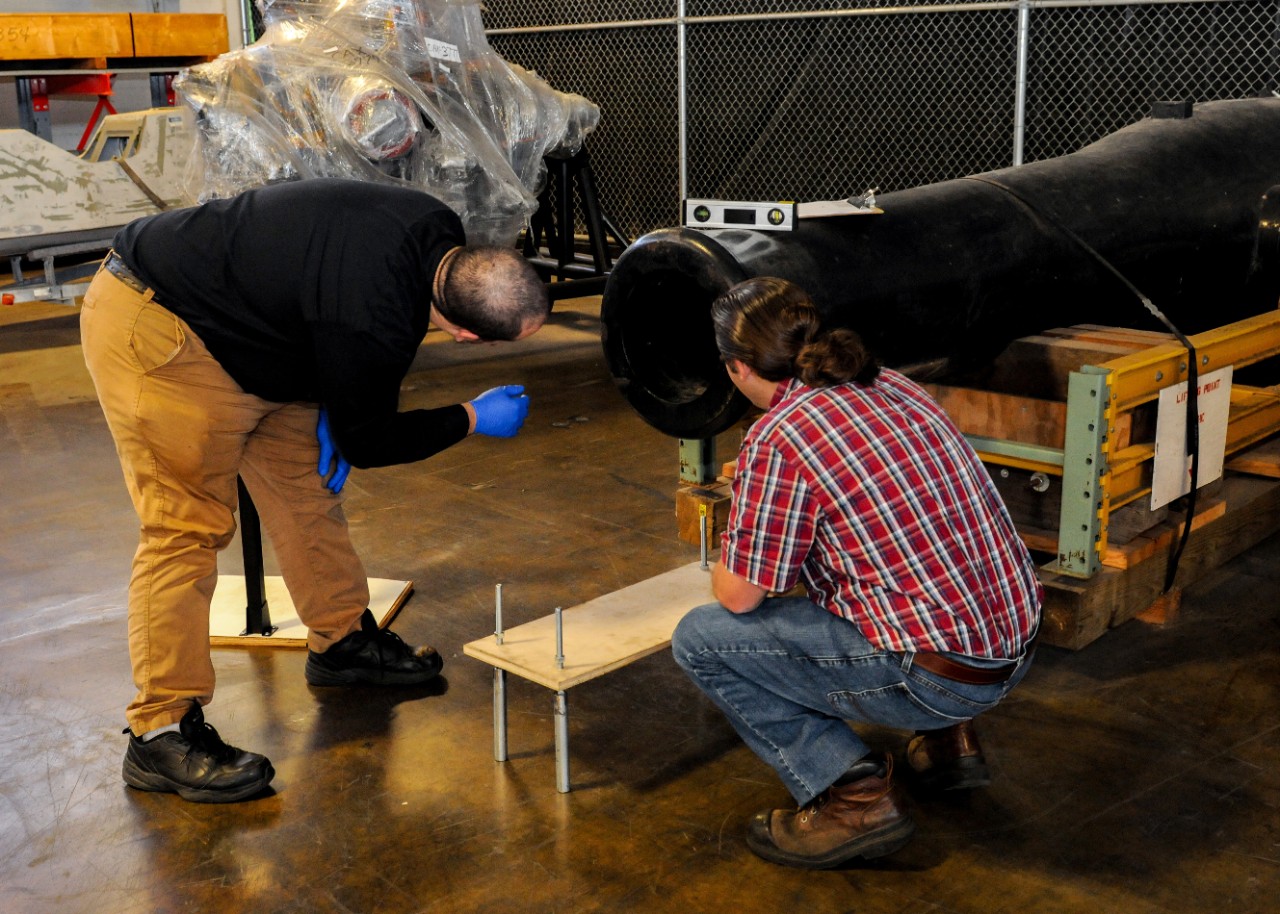 Description: 181023-N-HP188-0047 RICHMOND, Va. (October 23, 2018) Erik Farrell and Will Hoffman, archaeological conservators from the Mariners’ Museum and Park located in Newport News capture measurements from a Dahlgren smoothbore shell gun from Kearsarge I (Sloop-of-War) during a visit to the Collection Management Facility (CMF). The Curator Branch of Naval History and Heritage Command (NHHC) relocated artifacts stored in separate facilities in Washington, DC; Virginia and Tennessee to the CMF in 2014. (U.S. Navy photo by Mass Communication Specialist 2nd Class Mutis A. Capizzi/RELEASED)

David Krop heads NHHC’s Conservation Branch, also located at the CMF. He said the visit also offered his team an opportunity to speak with fellow archaeological and objects conservators.

“They [Mariners’ Museum team] needed to access non water damaged Dahlgren guns to measure the interior of the bores,” said Krop. “It’s a great example of NHHC’s collection being used to help other heritage projects with their conservation needs. It’s a really unique collaborative effort.”

Krop went on to say that the USS Monitor is one of the most iconic pieces of Civil War naval technology. Commissioned on Feb. 25, 1862 in New York, N.Y., Monitor had a thick-armored round turret which was twenty-feet in diameter. It was the first ship-mounted rotating gun turret. Rotated by steam power, the turret could fire nearly 360 degrees from the pair of eleven-inch Dahlgren smoothbore shell guns.

Departing for Hampton Roads, Va., Monitor arrived on March 9 and immediately engaged in battle with the Confederate ironclad, CSS Virginia, which was the first battle between ironclad warships. The previous day, Virginia sank both USS Congress and USS Cumberland. Though the battle with the Confederate ironclad was a draw, the engagement prevented the Confederates gaining control of Hampton Roads, which would have disrupted the Federal blockade. Encountering a storm on Dec. 31, she foundered and was lost along with 16 Sailors of her 62-man crew. 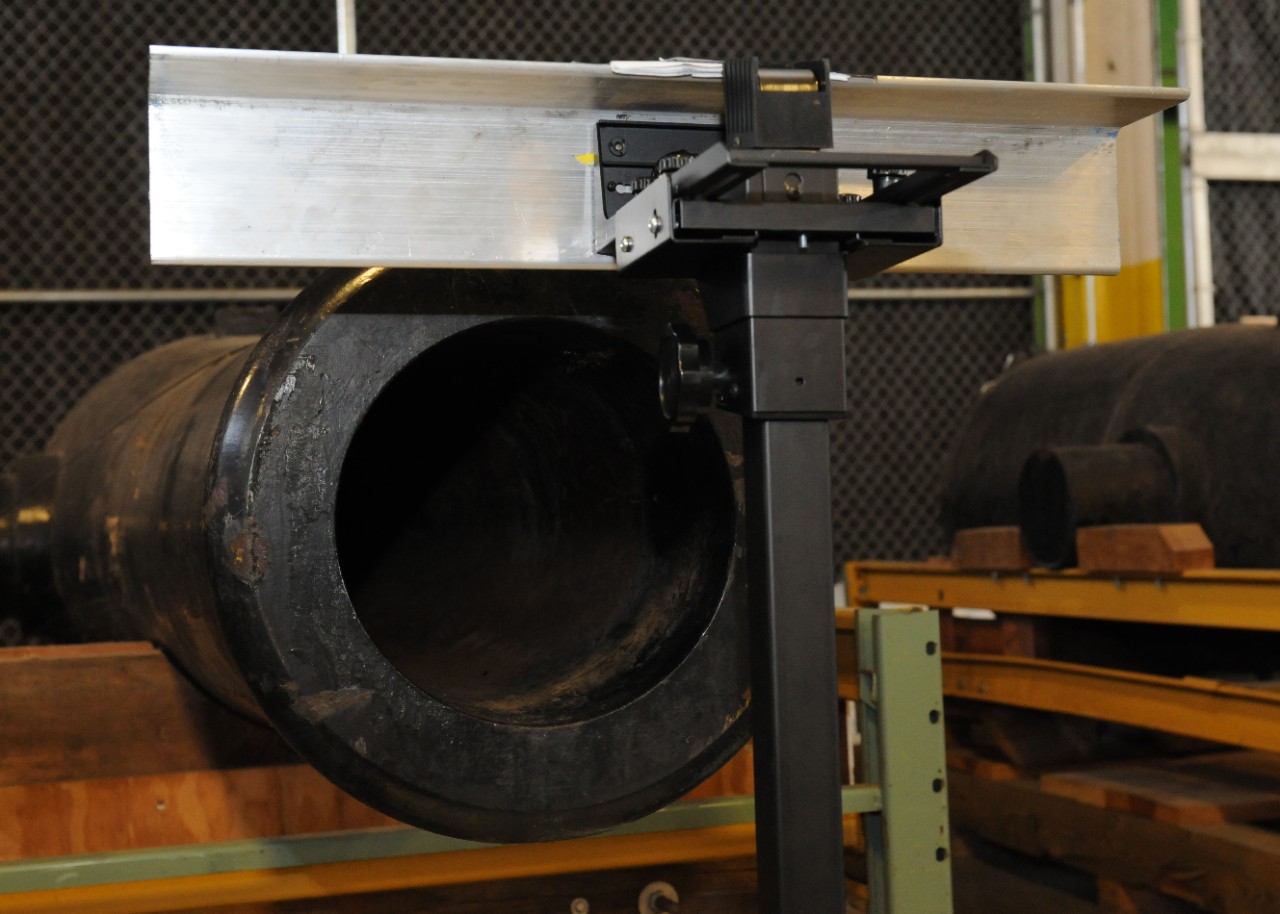 Description: 181023-N-HP188-0043 RICHMOND, Va. (October 23, 2018) A Dahlgren smoothbore shell gun from Kearsarge I (Sloop-of-War) has a device attached to capture measurement data needed to aid in the conservation of two guns recovered by the Mariners’ Museum and Park in 2002 during a visit to the Collection Management Facility (CMF). The Curator Branch of Naval History and Heritage Command (NHHC) relocated artifacts stored in separate facilities in Washington, DC; Virginia and Tennessee to the CMF in 2014. (U.S. Navy photo by Mass Communication Specialist 2nd Class Mutis A. Capizzi/RELEASED)

In 2014, NHHC relocated artifacts stored in separate facilities in Washington, D.C.; Virginia; and Tennessee to its new Collection Management Facility at Richmond, Va. The facility features improved temperature and humidity control, more appropriate shelving and storage, and an area for the conservation of artifacts.