WASHINGTON – Thomas O’Brien, a World War II veteran and the oldest Sailor from Honor Flight Bay Area (California) along with Master-at-Arms 3rd Class Isabella Valentino, the youngest Sailor from the Washington Navy Yard, cut the cake during a celebration honoring the Navy’s 243rd year of establishment at the National Museum of the U.S. Navy, Oct. 12. 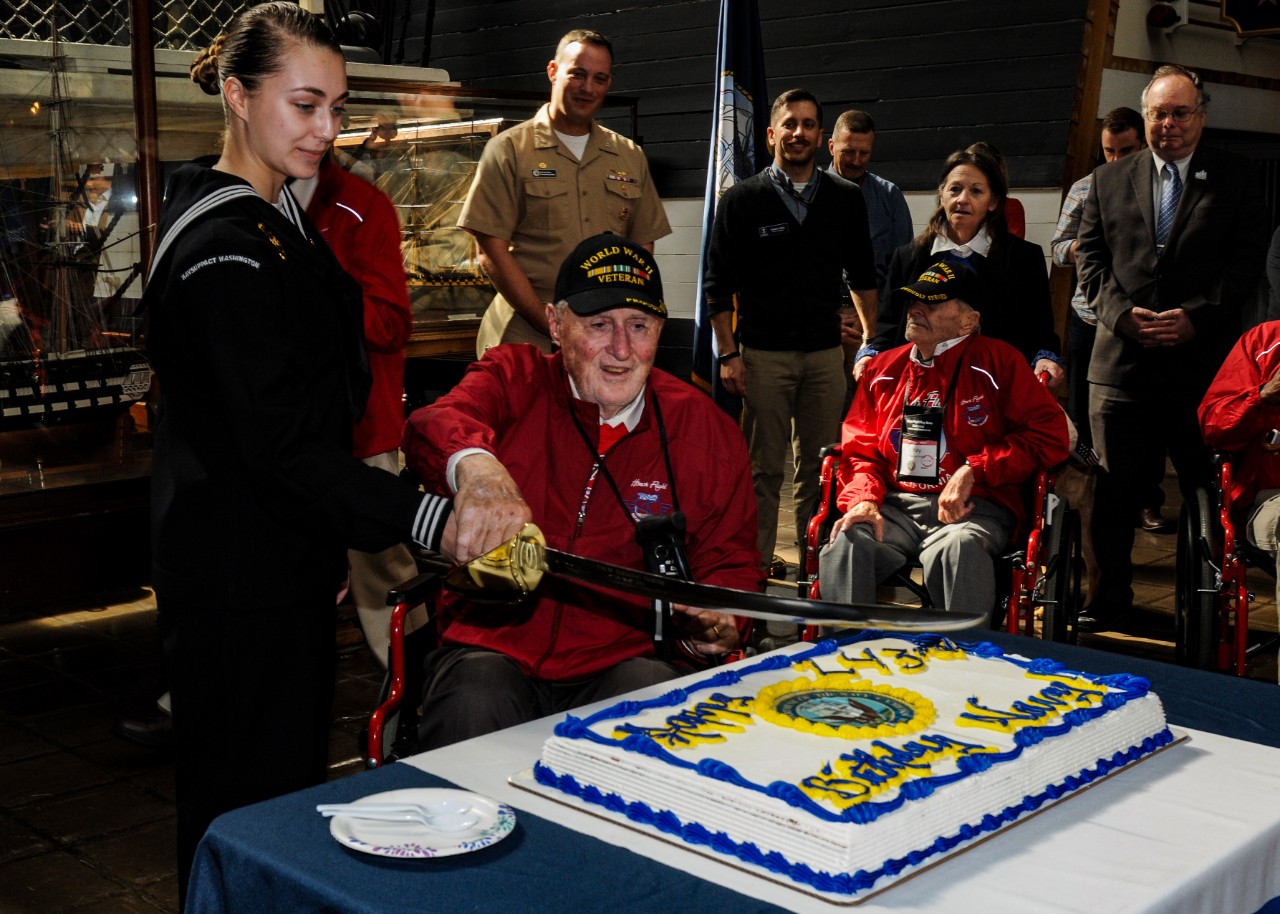 The annual event, hosted this year by Naval History and Heritage Command (NHHC), celebrates the establishment of the Continental Navy on Oct. 13, 1775. In 1972, Chief of Naval Operations Admiral Elmo R. Zumwalt authorized official recognition of October 13th as the birthday of the U.S. Navy. Since then, each CNO has encouraged a Navy-wide celebration of this occasion “to enhance a greater appreciation of our Navy heritage, and to provide a positive influence toward pride and professionalism in the naval service.” The theme of this year's birthday observance was "Forged by the Sea.”

Twenty-six veterans from Honor Flight Bay Area joined NHHC as a stop on their visit to the Washington D.C. area. The Honor Flight Network is a non-profit organization created solely to honor America’s veterans for all their sacrifices. They are responsible for transporting veterans from World War II, Vietnam and Korean wars to Washington D.C. to visit and reflect at their memorials. Thomas O’Brien served as a Gunner’s Mate 3rd Class during World War II and was excited to be a part of the cake cutting.

“I feel real lucky; I had no idea it was going to be like this,” said Thomas O’Brien. “I loved the Navy when I was in it and I spent about three and a half years during World War II sailing the Indian Ocean and South and North Pacific and the Atlantic as part of the Naval Armed Guard. Our job was to protect merchant ships.”

“He has inspired me my entire life and I wanted to escort him on this Honor Flight because of it,” said Daniel Paul Thomas O’Brien. “I wanted to give back to him a little and let him see all these wonderful memorials.” 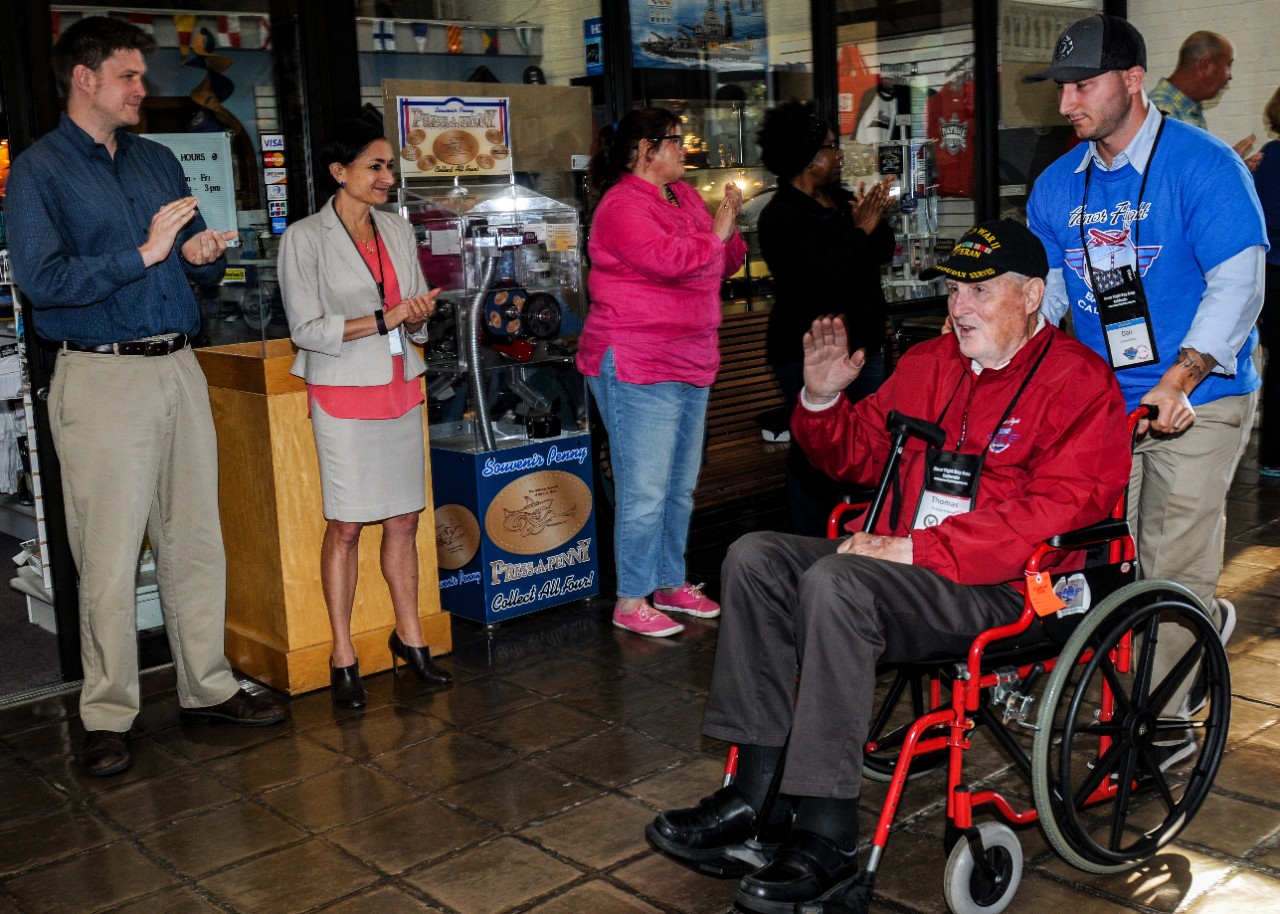 WASHINGTON (October 12, 2018) Thomas O'Brien, a World War II veteran who served in the U.S. Navy as a Gunner's Mate 3rd Class, is greeted by Sailors and Civilians as he is pushed by his grandson, Daniel Paul Thomas O'Brien, as they enter the National Museum of the U.S. Navy during an Honor Flight visit. Naval History and Heritage Command (NHHC) hosted the Honor Flight Bay Area (California) as part of the Navy's 243rd Birthday celebration. NHHC, located at the Washington Navy Yard, is responsible for the preservation, analysis, and dissemination of U.S. naval history and heritage. (U.S. Navy photo by Mass Communication Specialist 2nd Class (SW/AW) Mutis A. Capizzi/RELEASED)

The celebration ended with lunch for the Honor Flight veterans served at the Museum Education Center. Sailors and civilians had the chance to speak to veterans and learn about their experiences in World War II, Vietnam and Korean Wars. The veterans were able to share with them how they were “Forged by the Sea” and that the lessons learned on the sea stay with you long after you leave it behind. 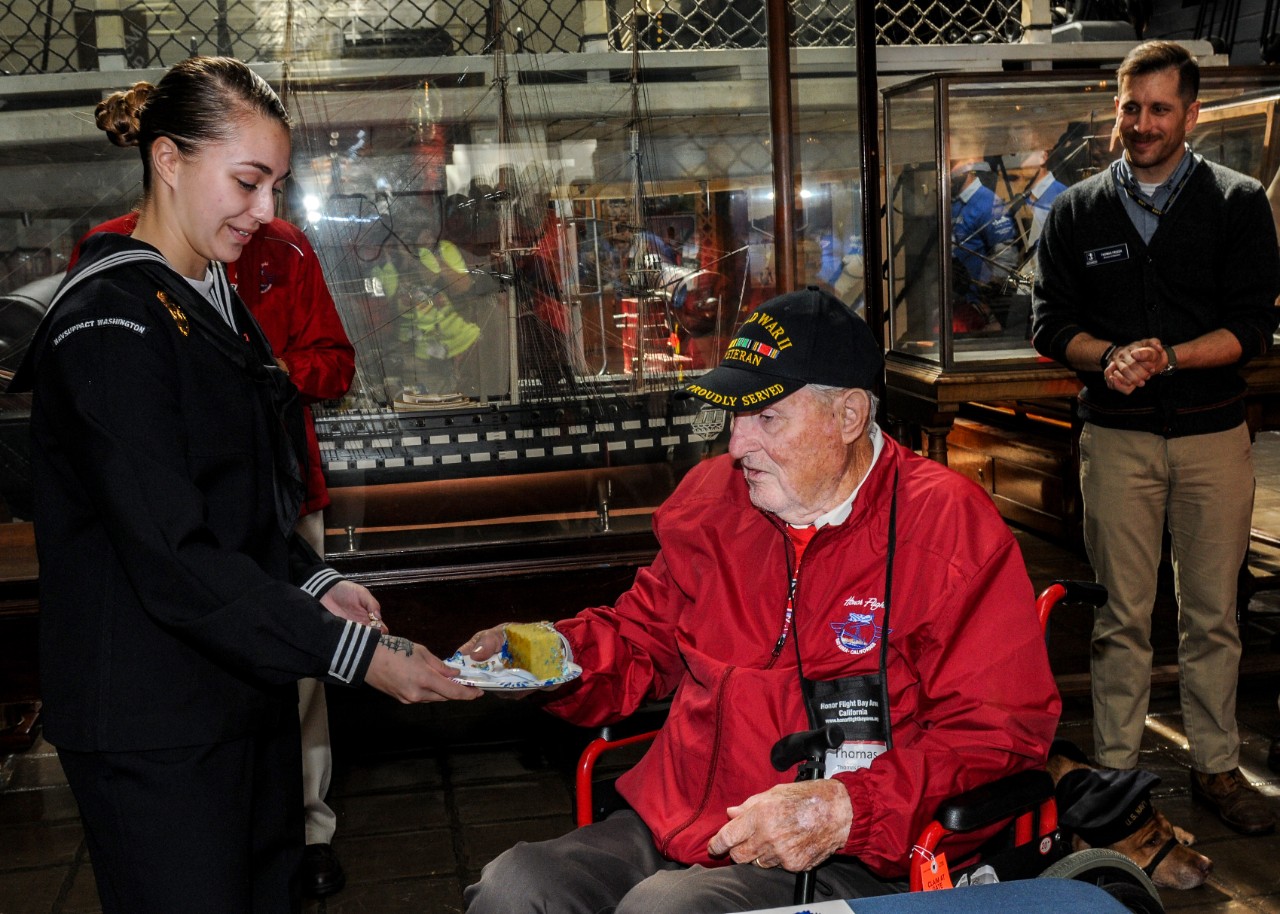