WASHINGTON, D.C. – Naval History and Heritage Command (NHHC) formally received a cutlass from a private donor during a ceremony in the National Museum of the United States Navy, May 12. 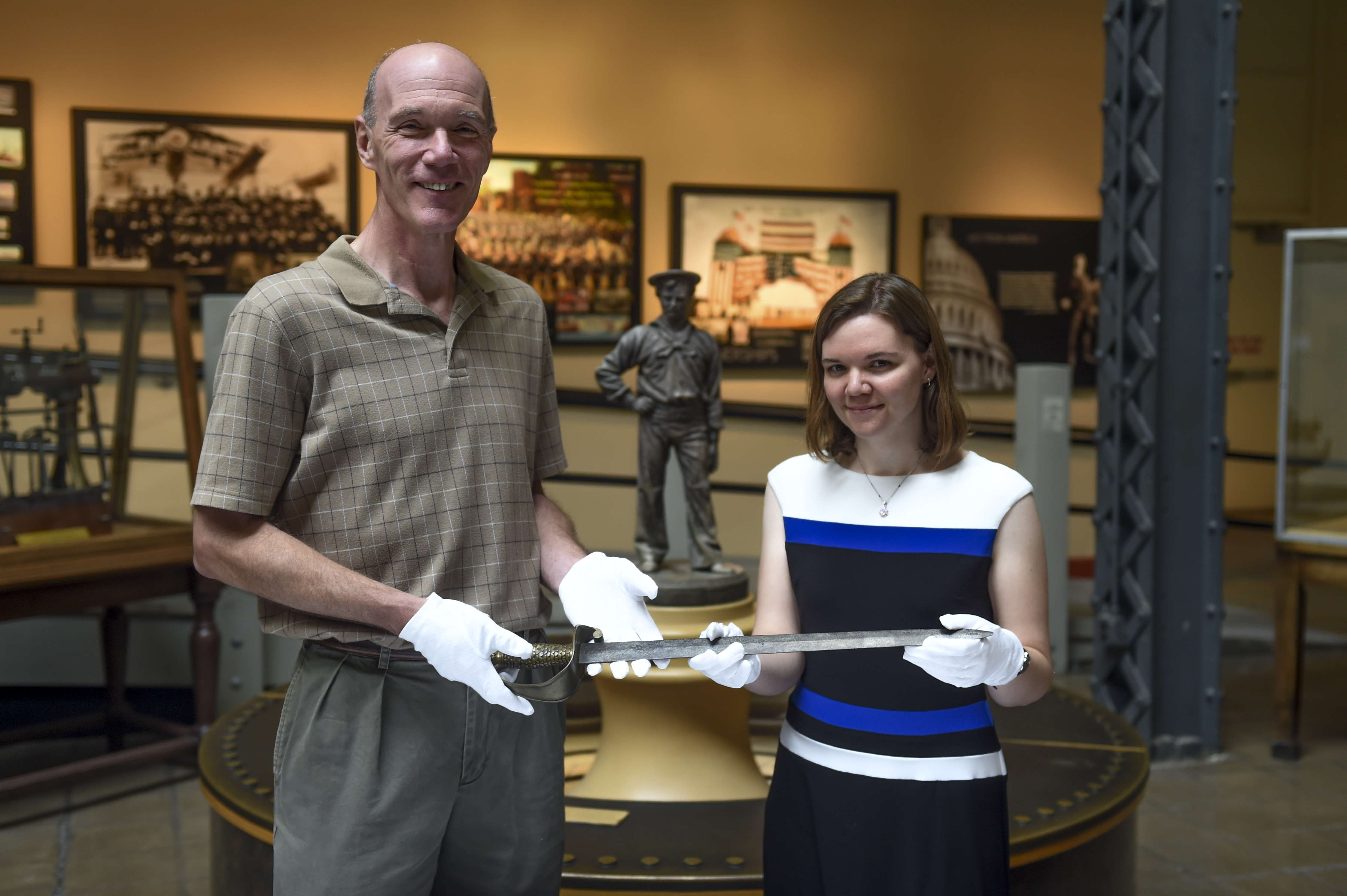 Caption: WASHINGTON (May 12, 2017) — Jennie Ashton (right), a curator at Naval History and Heritage Command’s (NHHC) Collection Management Division, formally receives a donated Navy cutlass on behalf of NHHC from Wayne Perry, in whose family’s possession the artifact had been since just after the Civil War, in the National Museum of the United States Navy, May 12. The cutlass is now one of two such artifacts in NHHCs collection that are available to researchers and museums for research or exhibit requests. (U.S. Navy photo by Mass Communication Specialist 1st Class Eric Lockwood/Released)

According to the NHHC Curator Branch, the artifact seems to have been made prior to the Civil War, possibly in 1843 or 1845, and has several identifying marks and numbers on it, including the initials of its inspectors. “USN” can also be seen near the base of the blade.

The donor, Wayne Perry, wanted to donate the artifact in honor of his father, Huyler C. Perry, who served on the aircraft carrier USS Leyte (CV 32) during the Korean War.

"My dad was always proud of his service and always eager to tell stories of his time on cruises and in battle during the Korean War,” he said. “I figured it would do a lot more good here than anywhere else.”

It’s not entirely clear how the cutlass came into the possession of Perry’s family, but according to him it had evidently been with them since right after the Civil War. His family did not have any ancestors in the Navy during that time, but his great-great-great grandfather had traveled to New Orleans to help rebuild houses right after the war, around which time the cutlass appeared.

Measuring 26.5 inches long with a 21-inch blade, Perry was able to determine that it is a model M1841 Navy Cutlass. However, despite several cuts and gouges along the edges, its journey after manufacture to Perry’s great-great-great grandfather is more mysterious.

“Any cuts or gouges on the blade could be attributed to service in action but it is also equally likely that those marks were the result of rough transport or treatment at some point in its life,” said Jennie Ashton, a curator in NHHC’s Collection Management Division (CMD). “But it could have been on a ship that saw action.”

The artifact will join a similar Navy cutlass already in CMDs catalogue, also an M1841 model. 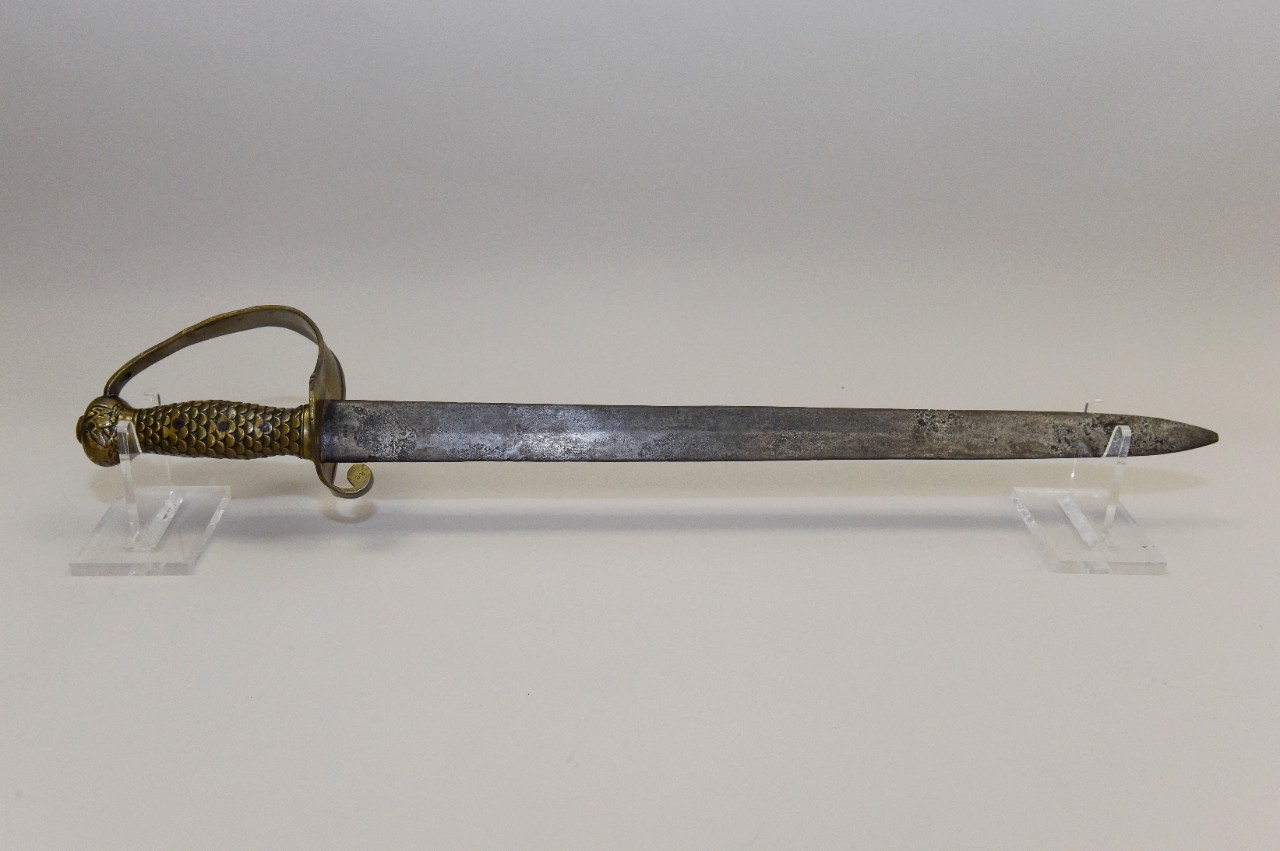 “I feel like I did a really good thing,” said Perry after the formal accession. “I could have sold it, but it’s worth a lot more in historical value than the money I would earn off of it. I just feel good about it.”

According to research done by Ashton and others on the CMD team, the U.S. Navy purchased 6,600 of the M1841 cutlass. These weapons most likely saw service during the Mexican-American War (1846-1848). By the time of the Civil War, the U.S. Navy had negotiated a new contract with the Ames Manufacturing Company for a new model of cutlass, thus the creation of the M1861 cutlass. It is possible that there were a few M1841 cutlasses still in use aboard Navy vessels during the Civil War. The M1841 cutlass is similar in design to the M1832 foot artillery sword used by the Army. They have the same basic design with a cast brass hilt, an eagle on the pommel and a scalloped feather design on the grip. A brass strip was added to the cutlass to protect the hand. Consequently, the cross-guard was changed to accommodate the new knuckle guard.

While there are no plans as of now to put the artifact on display somewhere, it will be available to researchers and museums for research or exhibit requests.