PENSACOLA, Fla. – (NNS) – A special unveiling of 140 names being added to the Vietnam Memorial Wall South was the highlight of the annual Memorial Day Observance Ceremony, May 28, 2017, at the Pensacola Veterans Memorial Park. 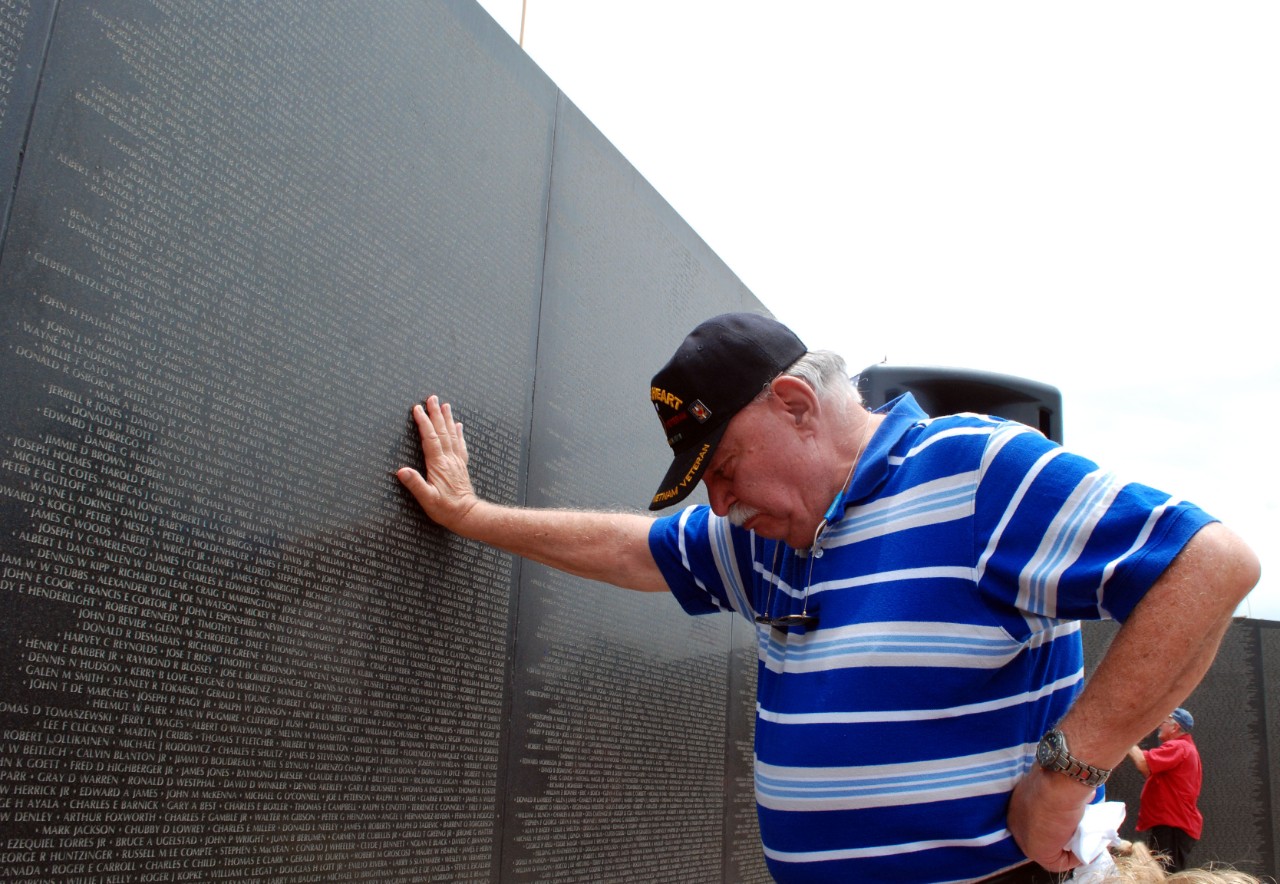 Caption: 170528-N-EE261-041 PENSACOLA, Fla. (May 28, 2017) Norman Sassner, a Vietnam War veteran and Purple Heart recipient, visits the Pensacola Veterans Memorial Park for a Memorial Day Ceremony. Sassner said he has six friends on the wall. This year’s ceremony included the unveiling of an additional 140 names to the Pensacola Vietnam Memorial Wall South, the only permanent Vietnam memorial in the U.S. outside of Washington, D.C. (U.S. Navy photo by Ens. Jacob Kotlarski/Released)

“All these names are very real people,” Moyer said. “I don’t know what words could ever put into perspective that brave men and women gave their lives so we could be here today.”

The Lost Back End Crew received this name after having to bail out over the South China Sea during an in-flight emergency while en route to a combat mission May 26, 1966. The men were never heard from again. 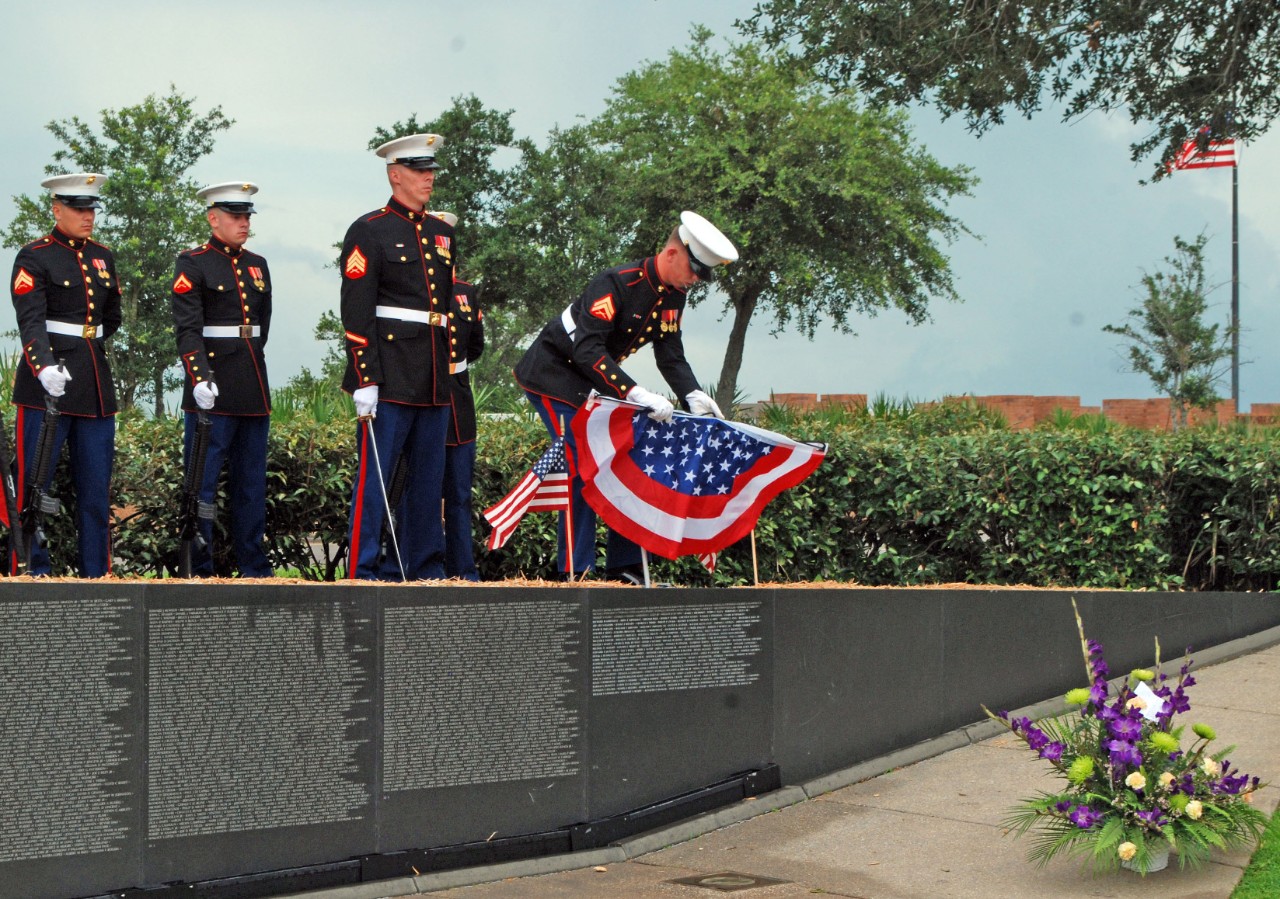 Caption: 170528-N-EE261-099 PENSACOLA, Fla. (May 28, 2017) As part of a Memorial Day ceremony, a U.S. Marine Corps Honor Guard unveils an additional 140 names that were recently added to Wall South. Wall South is a part of the Pensacola Veterans Memorial Park and is the only permanent Vietnam memorial in the U.S. outside of Washington, D.C. (U.S. Navy photo by Ens. Jacob Kotlarski/Released)

Control of the aircraft was regained after the back end crew bailed out. Lt. Colin Pemberton, the navigator who stayed aboard the plane, recorded their bail out as “Lost Back End Crew” in his logbook.

The four men were not originally listed on the national Vietnam Veterans Memorial because they were not originally identified as “combat casualties” by the Department of Defense. Stephanie Loper, Hunt’s niece, spearheaded the campaign to fix that and have the names added to the memorial in Washington so they could be properly remembered for their efforts in the Vietnam War.

Loper’s campaign was officially a success when the names were added to the memorial in 2012.

The ceremony in Pensacola took place on the same weekend 51 years after the Lost Back End Crew incident.

Loper said being a part of the project gave her the opportunity to meet the family members of the rest of the Lost Back End Crew. She attended the ceremony with Jay Aubin, the father of one of the four lost men.

“Through them I got to meet my uncle,” she said.

Loper’s uncle died five years before she was born.

Capt. Mark Stockfish, commodore Training Air Wing Six in Pensacola, has a direct link to the campaign to honor the men.

He was the commanding officer of VQ-2 when Loper approached the command for help with the project. He and his wife were present for both sets of name unveilings in Washington and Pensacola.

“Memorial Day is a great time for this ceremony,” Stockfish said. “It lets us remember all of our shipmates, especially the ones who have given the ultimate sacrifice like the Lost Back End Crew. I am so glad that I got to represent VQ-2 at both ceremonies and show that we remember our fallen comrades.”

Wall South is a one-half scale replica of the Vietnam Veterans Memorial in Washington, D.C., and is the only permanent  memorial structure in the United States for the Vietnam War outside of the nation’s capital.

For more information on the Pensacola Veterans Memorial Park visit http://www.veteransmemorialparkpensacola.com/page/home or http://www.vietvet.org/wallsobk.htm

For more information on a modern naval officer’s involvement in the project visit http://usnhistory.navylive.dodlive.mil/2017/05/25/lost-back-end-crew/

For more information on the Lost Back End Crew visit http://archive.kitsapsun.com/northwest-navy-life/whidbey/the-story-of-the-lost-back-end-crew-ep-492413350-357276071.html or http://lostbackendcrew.com/ 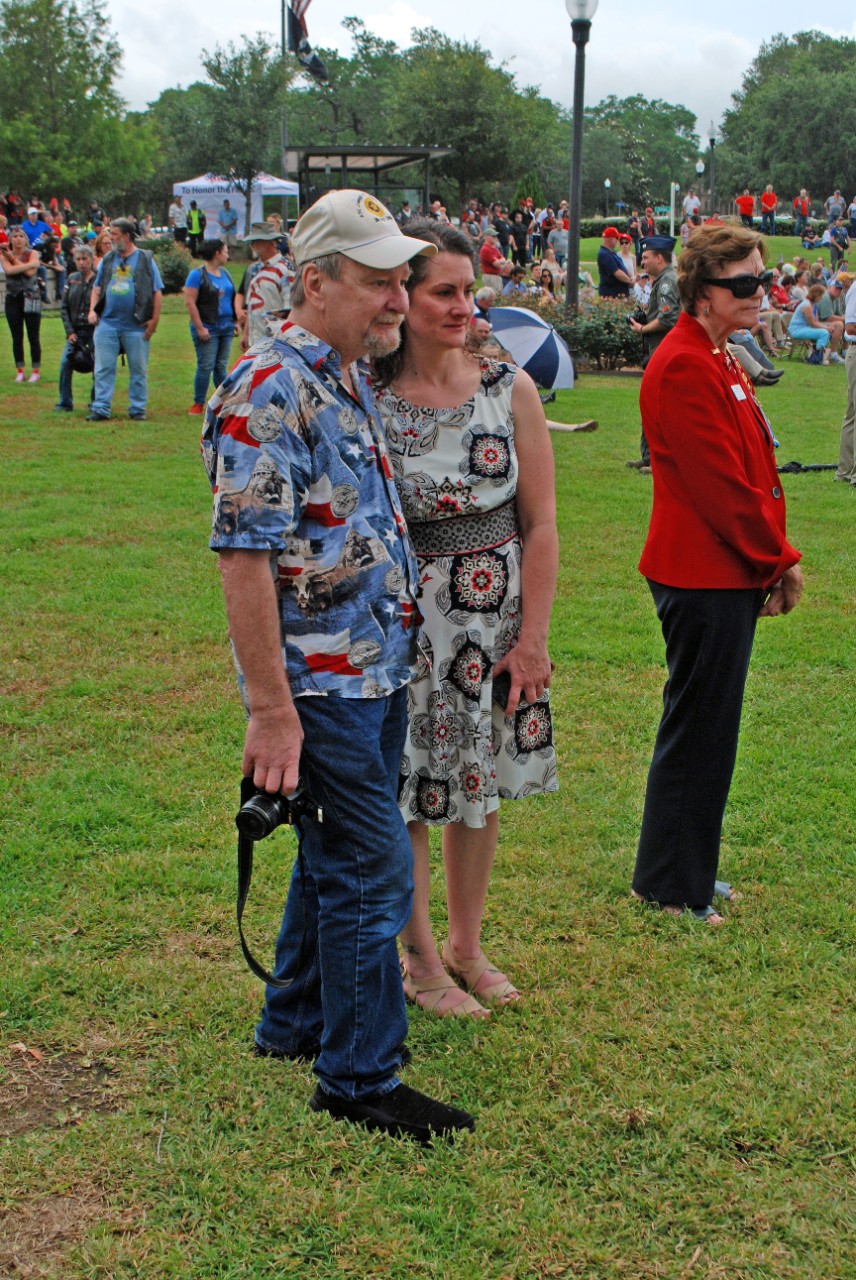 Description: 170528-N-EE261-108 PENSACOLA, Fla. (May 28, 2017) Stephanie Loper and Jay Aubin were in Pensacola for a Memorial Day ceremony in which 140 names were added to Wall South in Pensacola. Among the names being added were four members of the Lost Back End Crew: Lt. Walter Linzy, ATC Joseph Aubin, ATR3 Richard Stocker and ATR3 Richard Hunt of an EA-3B Skywarrior aircraft in Fleet Air Reconnassaince Squadron TWO (VQ-2) who were lost in the South China Sea in 1966. Loper is the niece of Hunt and led the project to get their names on the Vietnam Memorial and Jay Aubin is the father of one of the lost men. (U.S. Navy photo by Ens. Jacob Kotlarski/Released)