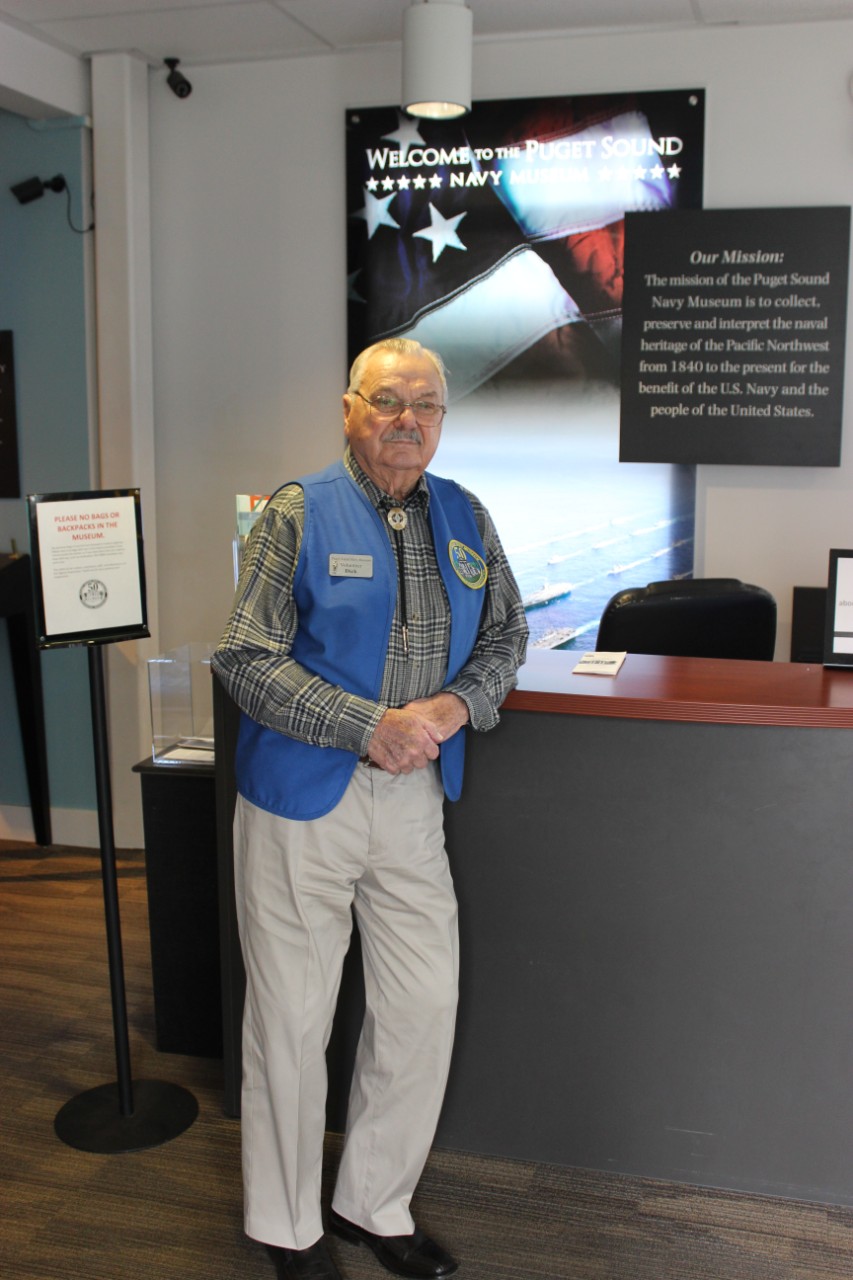 Description: Harold "Dick" Vlist, a docent at the Puget Sound Navy Museum (PSNM), stands ready to answer visitor questions at the front desk of the museum. Vlist was selected as the 2017 Serve Washington Governor’s Volunteer Service Award, veterans category, for his dedication, time and talent helping others in the community. (U.S. Navy photo/Released)

The Serve Washington award recognizes Washington citizens for their dedication, time and talents to help others in their communities and will be presented on April 11 in a pregame ceremony on the Seattle Mariners Salute to Volunteers Night at Safeco Field.

After the Serve Washington’s Nomination Review Committee commissioners read and scored numerous nominations on March 9, Harold “Dick” Vlist, a docent at PSNM, was selected as the winner in the veteran category.

“It’s quite an honor to be nominated for this award,” said Vlist.  “It was quite a surprise to me.”

For more than 70 years, a call to serve has driven Vlist to help others.  It started in 1943, when he joined the Navy, following in the footsteps of his father and stepfather.  His career spanned 11 years to include service in World War II, during which he served aboard troop transport ship USS Sirona (AKA 43). During the Korean War he again served on a troop transport, USS Telfair (APA 210) which participated in the Inchon landing which helped turn the tide of the conflict in Korea.

Upon Vlist’s departure from the Navy, his commitment to serve continued with a long and decorated career with the Navy League of the United States.  He has served for more than 45 years with the Navy League in such positions as secretary, regional president, Washington state president and national director.

Vlist’s service to others does not just stop with the Navy League.  Over the last year, he has dedicated more than 200 hours as a docent with PSNM. He also serves as a board member and single-handedly secured more than $20,000 in donations for PSNM’s non-profit foundation, which provided transportation to local schools for the museum’s science technology engineering and math (STEM) day activities.  To help his fellow shipmates, Vlist coordinated a reunion for more than 100 Sailors who served on the USS Parche (SSN 683), helping honor their service and remember those who served on the highly decorated vessel.

“I was raised in a Navy family and try to do anything I can do to help support the sea service,” said Vlist. “I have all the respect in the world for the service and what Sailors do.”

“Harold’s extraordinary dedication to the Puget Sound Navy Museum and the community has helped preserve our Navy heritage, inspired future generations to learn about Navy history and advanced the wellbeing of the citizens of Bremerton,” said Alexander Hostettler, a PSNM volunteer and events coordinator.

In his “spare time,” Vlist also runs donated clothes and books to the Washington Veterans Home in Retsil.

“I share this award with all of the volunteers at the museum -- it takes a team to do what we do,” said Vlist.  “We’re happy to do anything we can to make things a bit better.”

“He is passionate about Navy history and enjoys educating visitors about our Navy’s heritage,” said Hostettler.  “His dedication to volunteerism has cemented himself as a pillar of the community in Bremerton.”

PSNM is one of the Naval History and Heritage Command’s ten museums nationwide. The Naval History and Heritage Command, located at the Washington Navy Yard, is responsible for the preservation, analysis and dissemination of U.S. Naval history and heritage. It provides the knowledge foundation for the Navy by maintaining historically relevant resources and products that reflect the Navy's unique and enduring contributions through our nation's history and supports the fleet by assisting with and delivering professional research, analysis, and interpretive services. NHHC is composed of many activities including the Navy Department Library, the Navy Operational Archives, the Navy art and artifact collections, underwater archeology, Navy histories, USS Constitution repair facility and the historic ship Nautilus.