TEXAS CITY, Texas – The grand opening of the USS Westfield exhibit was held March 2 at the Texas City Museum in Texas City. 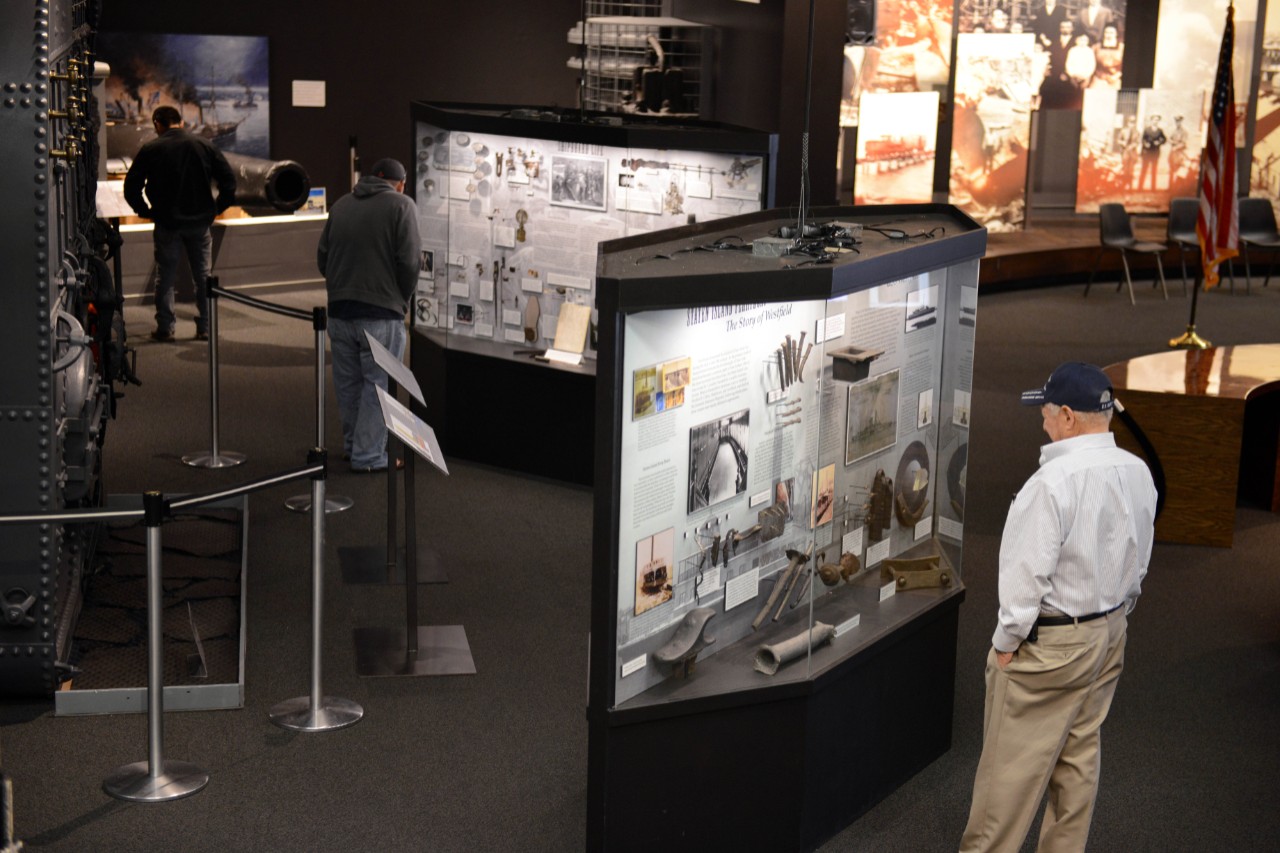 Caption: 170302-N-FJ200-014 TEXAS CITY, Tx. (March 2, 2017) Visitors tour the newly opened exhibit of the Civil War sidewheel steam ferryboat USS Westfield at the Texas City Museum on March 2. Westfield served as the flagship of the West Gulf Blockading Squadron, operating along the Texas Gulf Coast, where she was blown up after running aground during the Battle of Galveston, killing 13 of her crew to save the ship falling into Confederate hands. (U.S. Navy photo by Mass Communication Specialist 1st Class Clifford L. H. Davis/Released)

The exhibit displays the former Union Navy gunboat and gives insight to how civilian vessels were converted over for naval use during the Civil War.

In an attempt to deepen the Texas City Channel in 2009 yet preserve as much of the wreck as possible, the U.S. Army Corps of Engineers, underwater archaeologists from the Naval History and Heritage Command (NHHC), Naval Sea Systems Command Supervisor of Salvage and Diving, numerous archaeologists, conservators and other specialists worked together during salvage operations.  Once items were recovered and brought to the surface, they were sent to the Conservation Research Laboratory at Texas A&M University where the artifacts underwent interpretation and conservation.

After seven years of conserving the numerous artifacts recovered, conservation project manager of the USS Westfield, Justin Parkoff, Ph.D. and NHHC received multiple requests for portions of the collection go to local museums for display.

"It looked early on that requests were coming into [divide] the collection [among] various museums, and after learning the story of Westfield, from when she started as a Staten Island ferryboat to her battles and of her men, I wanted to keep the collection as one piece," said Parkoff.

Working in concert with the mayor of Texas City and the Texas City Museum, the exhibit allows citizens to explore a collection of more than 380 of the 8,000 artifacts recovered, that include the excavation, conservation and history of shipboard life from small items of personal effects to a scale mock-up wire-mesh recreation of the ship's steam boiler and a 9-inch smoothbore Dahlgren gun.

“The USS Westfield Project was a major undertaking that involved a range of federal, state and local governments as well as other stakeholders that had to work diligently together to make this a success,” said NHHC Underwater Archaeologist George Schwarz, Ph.D. “The exhibit is an excellent example of what can be accomplished with a disarticulated shipwreck and scattered field of artifacts recovered in less-than-ideal conditions.” 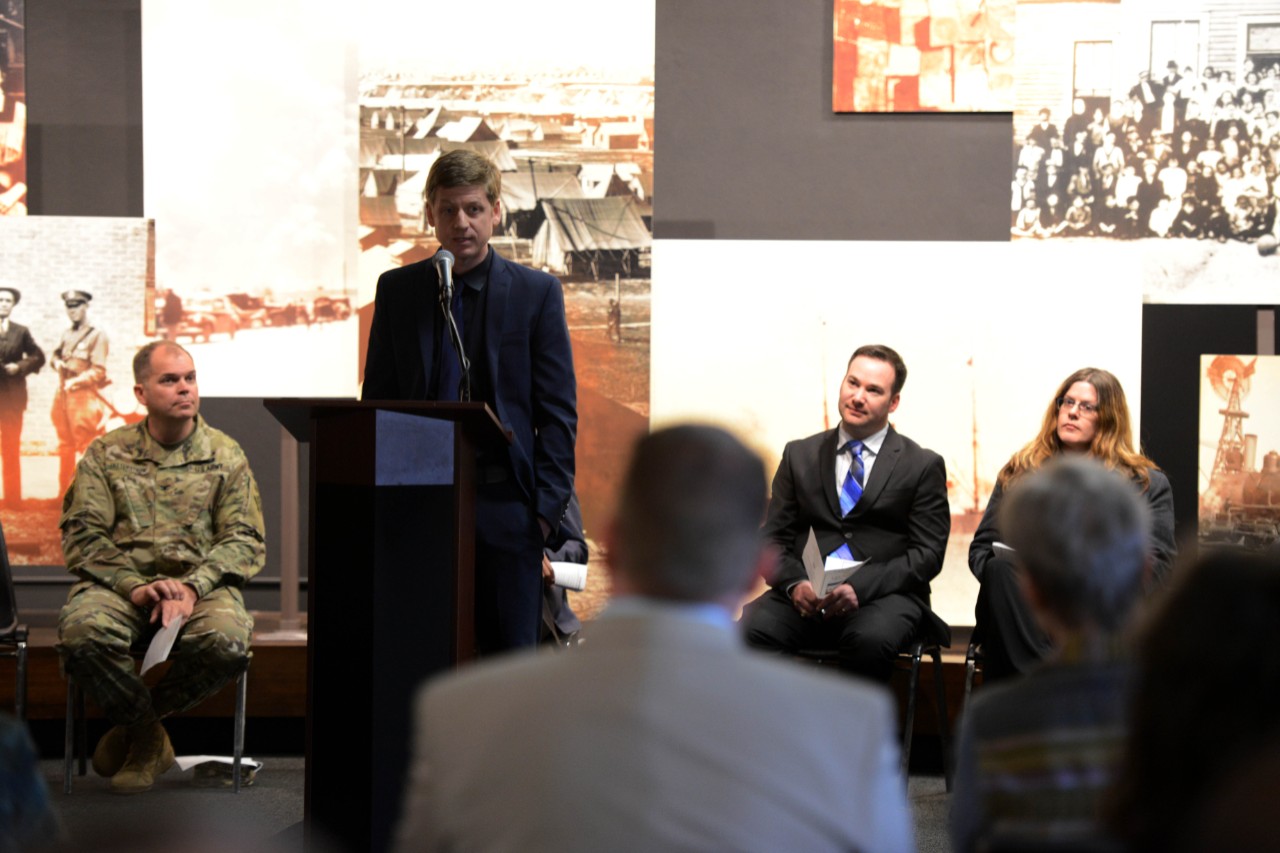 Caption: 170302-N-FJ200-108 TEXAS CITY, Tx. (March 2, 2017) Naval History and Heritage Command Archaeologist George Schwarz, Ph.D., speaks about the conservation and interpretation of artifacts related to the USS Westfield at the Texas City Museum exhibit opening on March 2. Westfield served as the flagship of the West Gulf Blockading Squadron, operating along the Texas Gulf Coast, where she was blown up after running aground during the Battle of Galveston, killing 13 of her crew to save the ship falling into Confederate hands. (U.S. Navy photo by Mass Communication Specialist 1st Class Clifford L. H. Davis/Released)

Westfield was the flagship for the West Gulf Blockading Squadron and had a significant impact on naval operations in the area earning the moniker the ‘Terror of the Texas Coast’ with her sister-ship, the USS Clifton.

On Jan. 1, 1863, during the Battle of Galveston, Westfield ran aground.  To prevent the ship from falling into Confederate hands, Commodore William Renshaw closed the safety valves on the boilers and set a powder trail to charges on the forward magazine. Still to this day it remains a mystery as to how Renshaw and 12 of his men were killed during the demolition of Westfield.  Theories range from the charges prematurely detonating, to the charges detonating when the crew returned to the ship to find out why they did not go off when they were set.

“Commodore Renshaw knew what his duty was as he tried to keep one of the most powerful ships in the Union fleet in Galveston from falling into Confederate hands,” said Parkoff. “If the ship was captured, the Confederates could have systematically recaptured port towns or used it as a blockade runner.”

“Given that USS Westfield was involved in the Battle of Galveston, Texas City Museum is a fitting local venue to highlight this naval encounter in American history and bring this newly found knowledge to the local and general public, as well as today’s Sailor,” said Schwarz.

For information on the USS Westfield, visit https://www.history.navy.mil/research/histories/ship-histories/danfs/w/westfield.html

The Naval History and Heritage Command, located at the Washington Navy Yard, is responsible for the preservation, analysis, and dissemination of U.S. Naval history and heritage. It provides the knowledge foundation for the Navy by maintaining historically relevant resources and products that reflect the Navy's unique and enduring contributions through our nation's history and supports the fleet by assisting with and delivering professional research, analysis, and interpretive services. NHHC is composed of many activities including the Navy Department Library, the Navy Operational Archives, the Navy art and artifact collections, underwater archeology, Navy histories, ten museums, USS Constitution repair facility and the historic ship Nautilus.