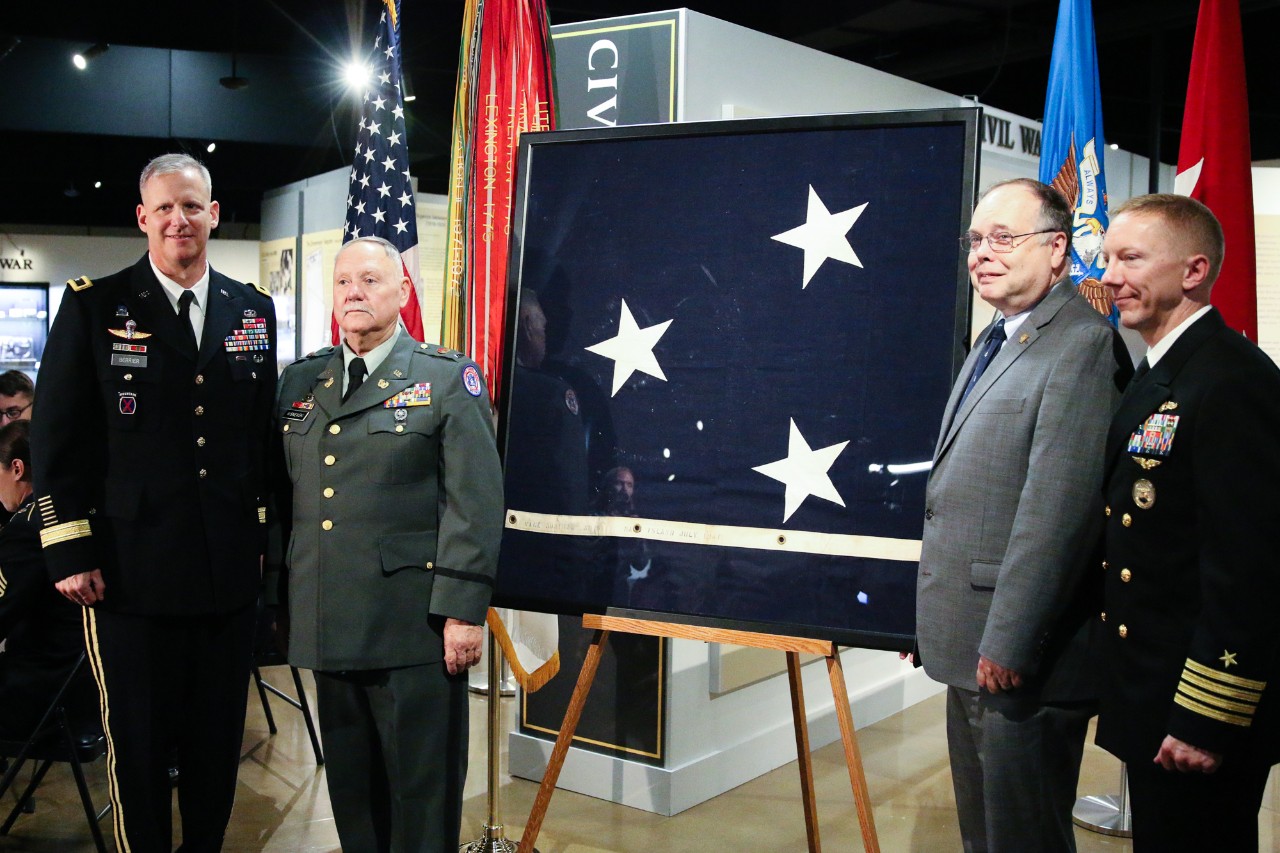 The flag from Wisniewski's private collection is believed to have belonged to Fletcher who played a significant role in the earliest successful naval battles in the Pacific Theater during World War II.

"In a tradition stretching back to 1865, Navy flag officers display their personal flags on their ship when they are aboard," said Navy Cmdr. Michael Gruell, the event's emcee. 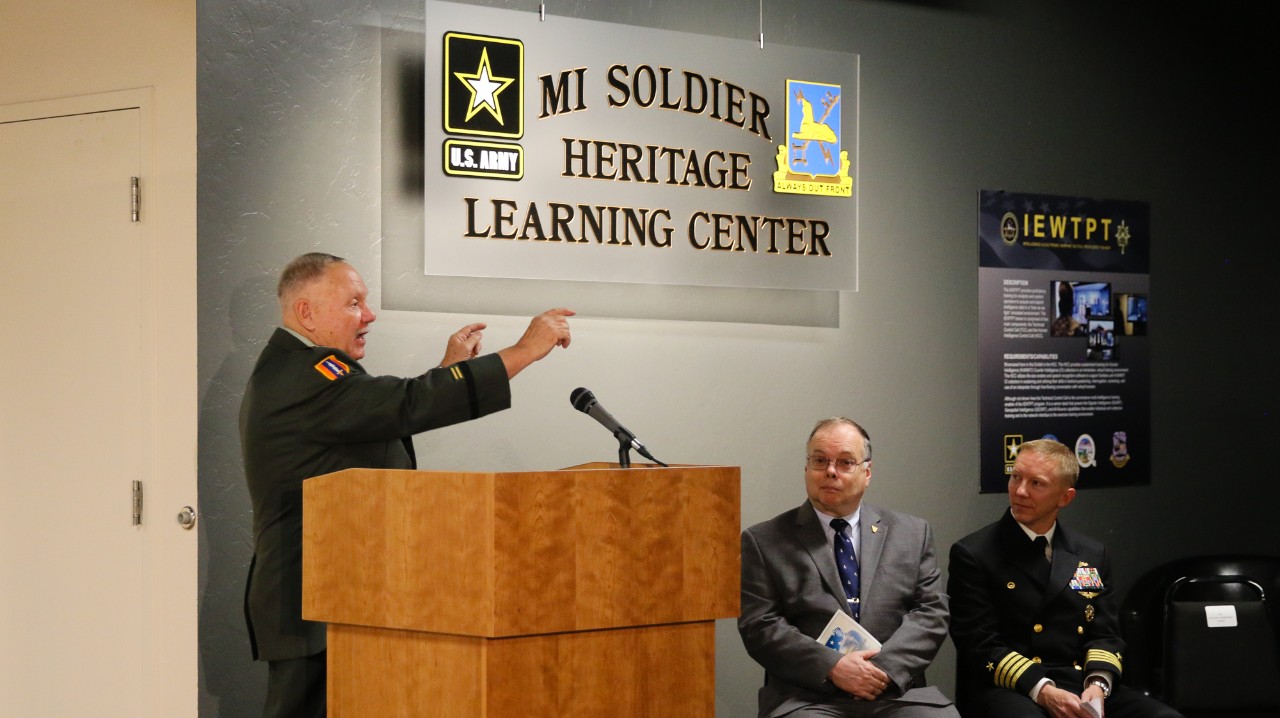 We are proud and honored to host this ceremony here today to give this flag back [to the Navy]," said Maj. Gen. Scott Berrier, commanding general, U.S. Army Intelligence Center of Excellence and Fort Huachuca. "If you were to ask a U.S. Army Soldier from Fort Bragg, North Carolina, or a U.S. Navy Sailor from [Naval Station Norfolk] in Virginia where [a ceremony] would take place that we would give a historic Navy flag back to the Navy, I'm pretty sure the last [place] that they would ever think about is Fort Huachuca, Arizona. So this really is unusual and a very special event that we are conducting here today.

Wisniewski explained that he acquired the flag from his cousin John Hildebrandt.

"He's not just my cousin, he is my friend," he said. "And we were friends for 69 years. He joined the Navy in 1961, and he got out in 1965. That was the time, I feel, that he was given the flag by my Aunt Pearl. He had it over 50 years. Towards the end of his life -- he was terminal -- I went to California to visit with him, and he said, 'Tom, I want you to have this flag.' It was a sensitive time so I just said, 'OK', but I ignored it, and I went home. About a month later I went back to visit with him and the first thing he says to me is, 'You didn't take that flag.' 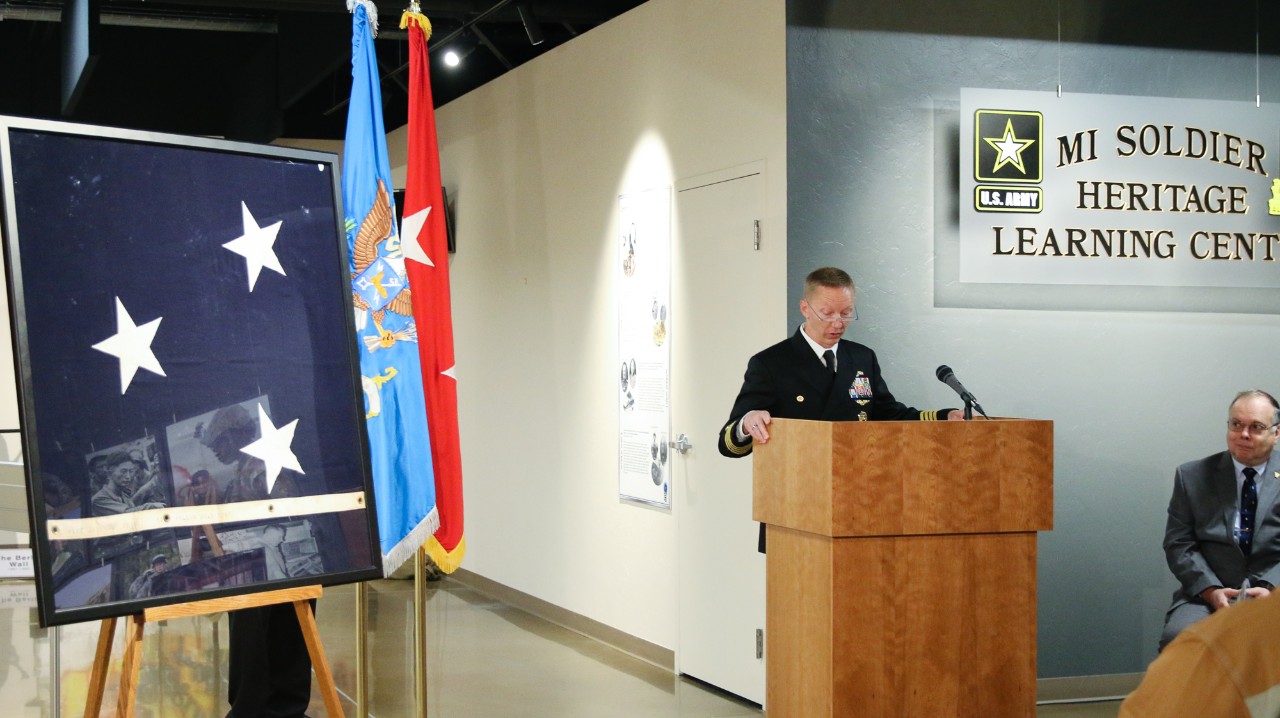 Wisniewski explained the flag had been hanging by the grommets on nails in his cousin's bedroom and almost reached the floor. As he took it down and folded it, Wisniewski ensured that family and friends understood his cousin had willingly given him the flag "because I placed a lot of value in it.

"John gave me this flag because I was military and I was the only one that would appreciate it," he said. "I'm wearing my uniform today because I'm respecting my cousin John for gifting this flag to me. He would be totally grateful to be involved in this today."

Not much happened with the flag until Wisniewski told Berrier about the flag and his cousin during a Warrant Officer Association meeting.

"I just wanted to tell you about it because you're probably the only person that would appreciate it in this group because it's a three-star general, [three-star] flag," he quipped.

Then Wisniewski decided to begin researching the history of the flag.

"I decided to do a little investigation on it and typed in the information on the bottom of this band right there," Wisniewski said as he pointed to the white band on the flag. "And pushed the button and guessed who showed up? Admiral Frank Fletcher. So that's how we got the connection. I said 'I better take care of this thing.' So I went and got it framed at the Fort Huachuca Frame Shop.

"Then this flag and I on Dec 7, 2016, on the 75th anniversary of the attack on Pearl Harbor, I took it to the [Veterans of Foreign Wars], and we had a ceremony there, and I shared it with the other members. Those Army guys knew what it was! Those Army veterans," Wisniewski said in amazement.

Later that day, he shared the flag with the genealogical club in Sierra Vista and their excitement about the flag generated the idea that Wisniewski should share this historical piece of property.

The next time Wisniewski saw Berrier, he said, "Do you remember when I told you about that three-star flag?"

Berrier remembered the flag and their conversation and Wisniewski went on to tell him that he thought he found out who the flag belonged to during his research. When Wisniewski showed Berrier a photo of the flag, the commanding general asked him what he was going to do with the flag. 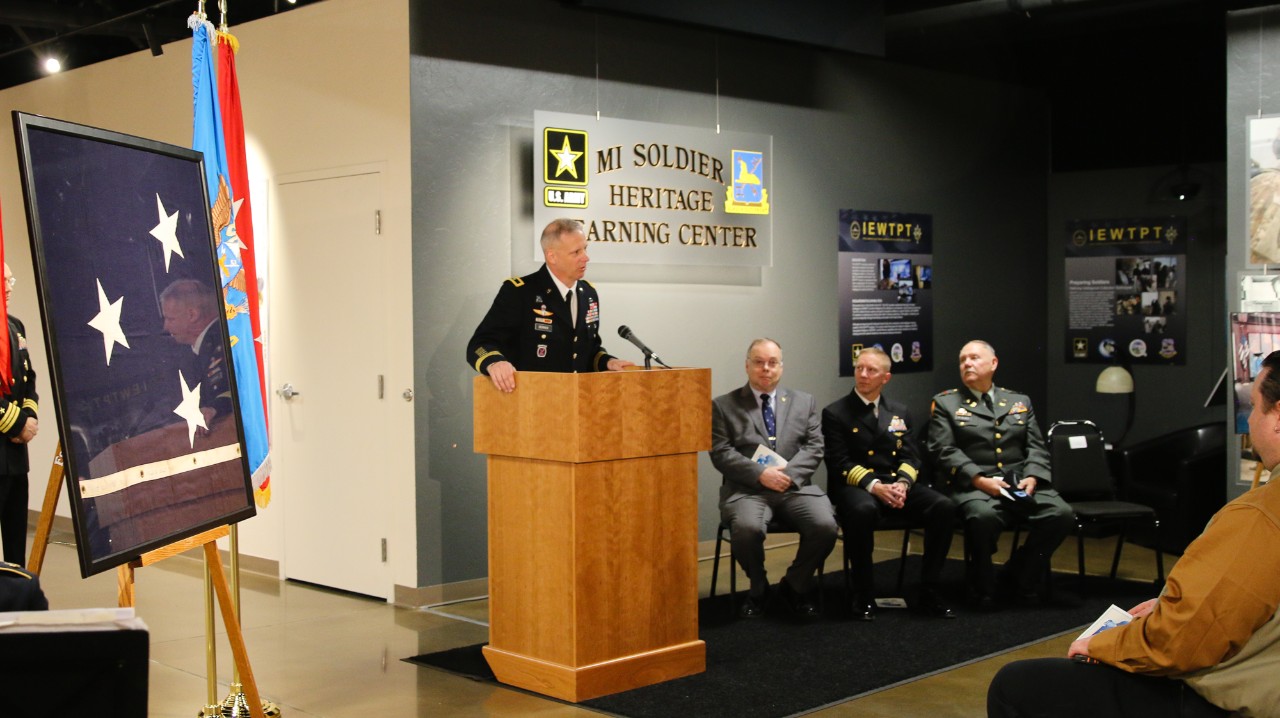 "Do you mind if I contact some of my Navy admiral friends?" Berrier asked him, and Wisniewski said, "No Sir, not at all."

"And that's why you are here now," Wisniewski said. "Because General Berrier contacted the right folks and now it's going to the right home."

"My function in this ceremony is for the transfer if you are still willing to do this?" Johnson asked Wisniewski. After getting a thumbs up from the retired warrant officer, the Navy captain continued.

"As the senior ranking naval officer assigned to Fort Huachuca, it is my distinct honor and privilege to accept Admiral Fletcher's three-star flag on behalf of the Wisniewski and Hildebrandt families and to present it to Mr. Samuel Cox, who serves as the director of Naval History and Heritage Command and Curator of the Navy. He's responsible for the Navy's museums, art and artifact collections, the research library, the archives and for collecting and interpreting U.S. Naval history throughout the world. 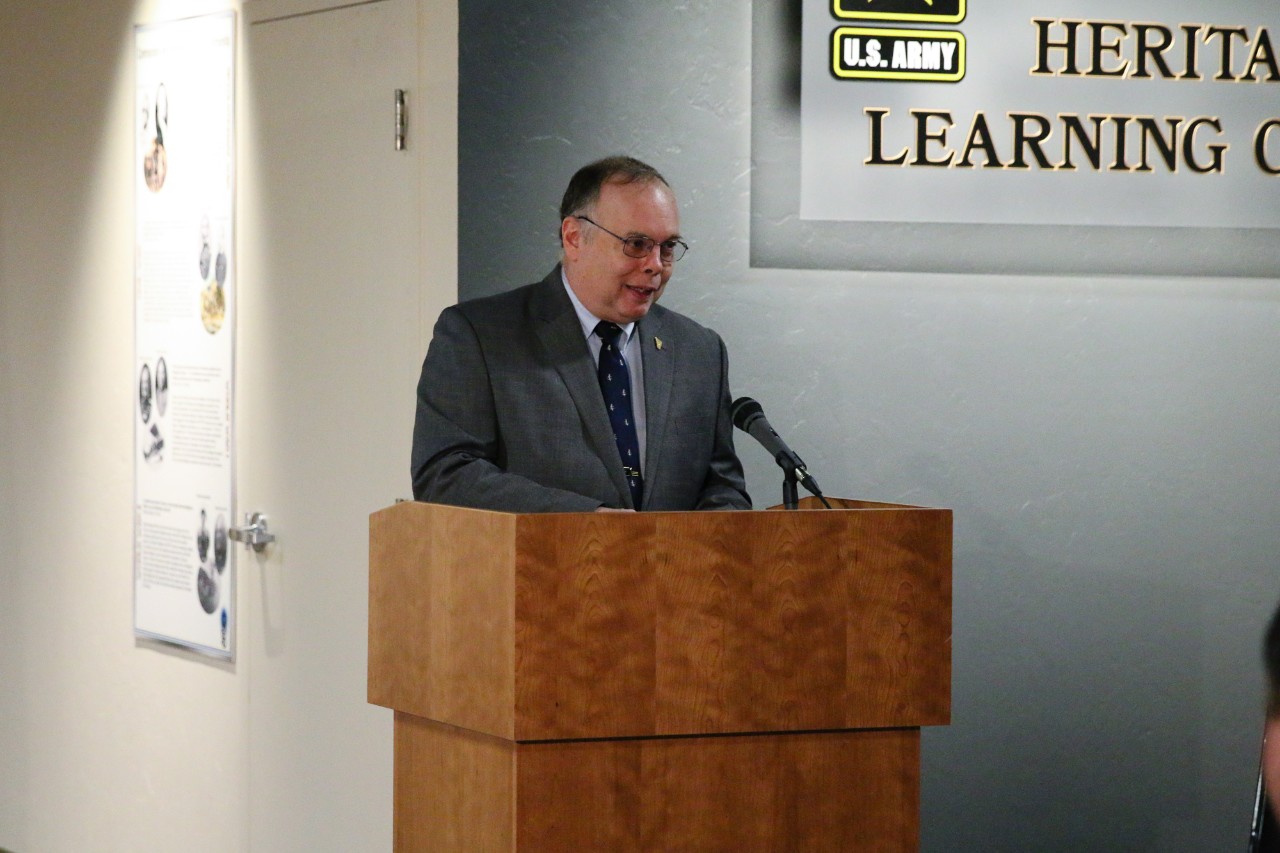 "I am confident that Mr. Cox will find the right place to prominently display this unique piece of naval history. On behalf of the Wisniewski and Hildebrandt family, the Fort Huachuca community, I respectfully return this flag to the United States Navy and to your care."

"This is one of those lucky events that you couldn't possibly plan for, but it just worked out in a way that I think is awesome and on behalf of the United States Navy, I would like to express my gratitude to Warrant Officer Wisniewski for his dedication and diligence in tracking down the history of this flag and what it means," Cox said. "Because it truly does mean an incredible lot to the United States Navy."

The flag will be accessioned into the Navy’s artifact collection and eventually displayed at the National Museum of the U.S. Navy.

"This flag will go there," Cox said. "In the meantime, we'll take good care of it."

Cox elaborated on Fletcher's naval service and accomplishments which included engagements as a commander in the Battle of the Coral Sea and the Battle of Midway.

"He is an incredible hero of the United States Navy and we are deeply appreciative to have his flag returned to the Navy where we will put it in a place of honor in our museum," Cox concluded. "Thank you very much." 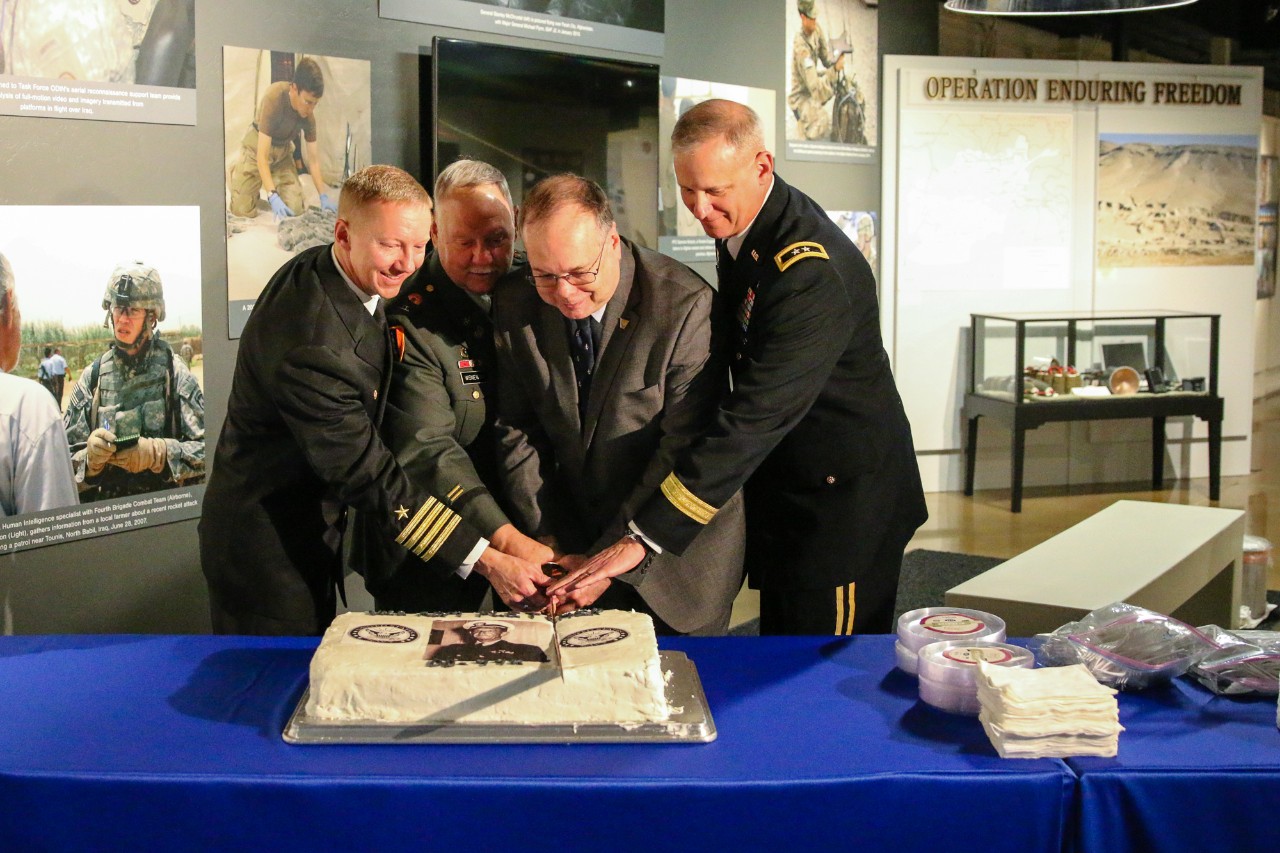