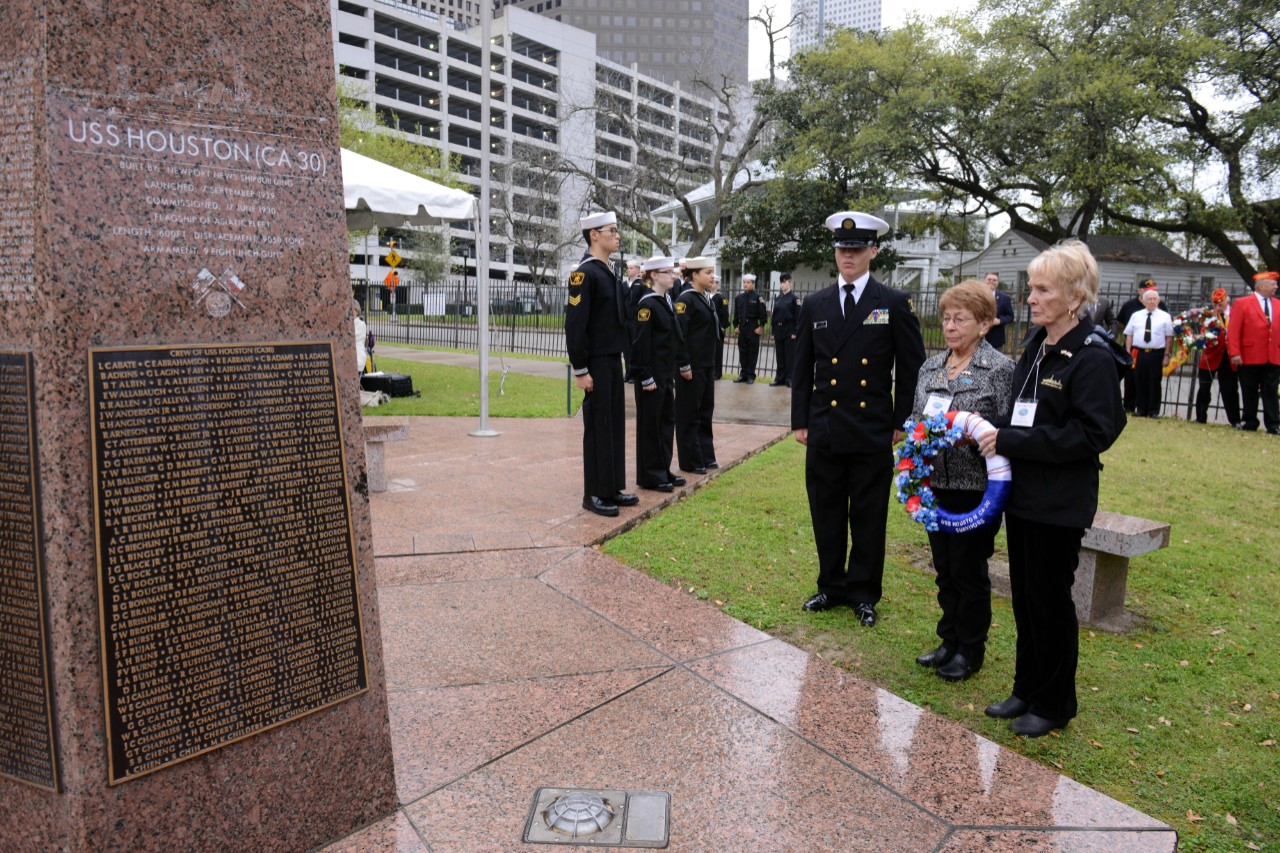 The ceremony set to honor those who lost their lives during the Battle of Sunda Strait on March 1, 1942, including the Sailors from the Australian, British and Dutch nations who attempted to stop Japanese naval forces from landing in Java.

Trudy Schwarz, the widow of Houston survivor Otto Schwarz, presented Director of the City of Houston Office of Veterans Affairs Carl Salazar with a framed photograph depicting 1,000 men of when on Memorial Day, 1942, 1,000 Houston men volunteered to join the Navy to replace the crew of USS Houston (CA 30). 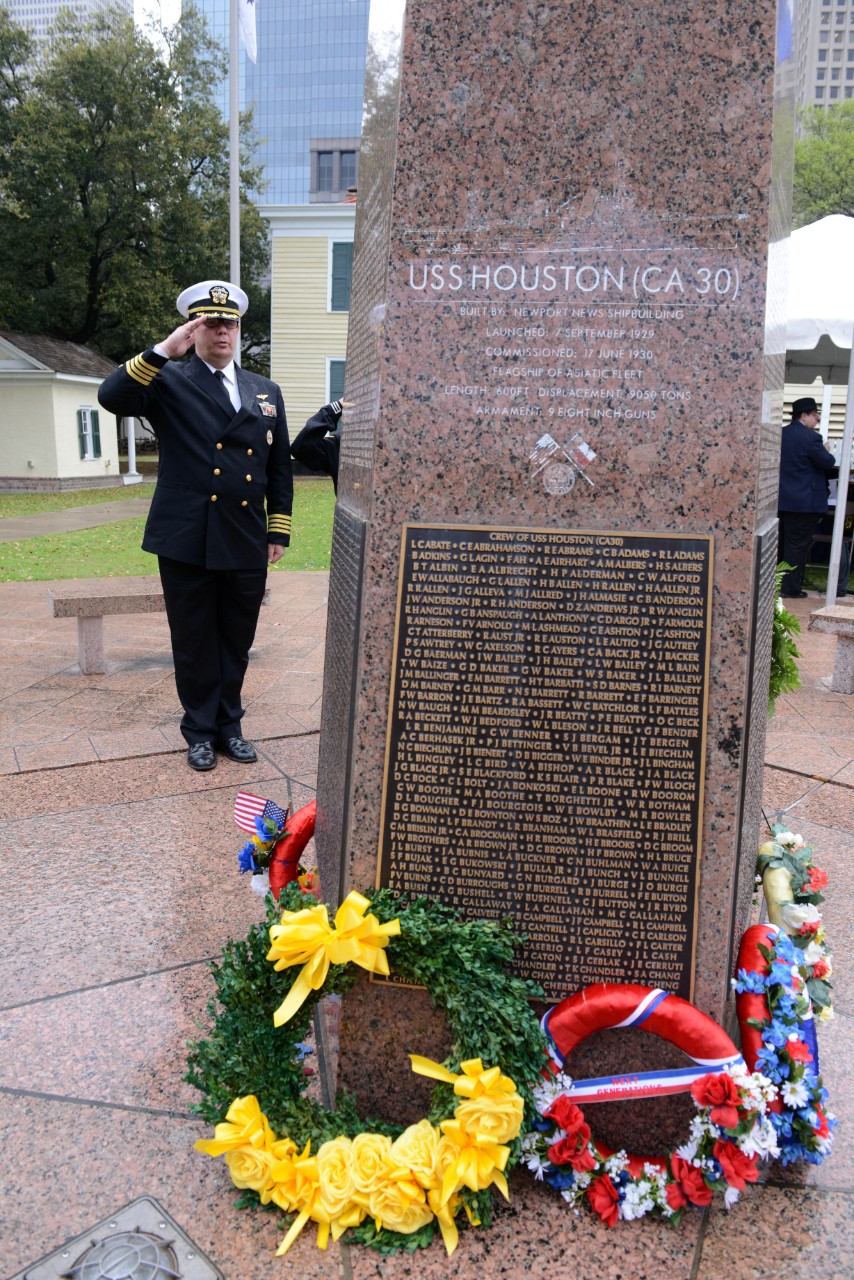 Each speaker emphasized the dedication and courage every allied Sailor displayed despite language barriers, being outnumbered by the Imperial Japanese naval force during the battle, and the hardships of captivity experiences later as prisoners of war.

“It is you, in whom the blood of Houston flows. You have grown up with the stories of the valor of her crew, you know far better than I how the Sailors and Marines of Houston struggled against overwhelming odds, how they stood for flag, country and American civilization against an overawing enemy who, at that time seemed nigh on unstoppable,” said Stacpoole.

Multiple wreaths were positioned in front of a granite monument to the USS Houston, which incorporates the ship’s bronze bell that was recovered from the wreck and erected in Sam Houston Park in 1998.

The ceremony ended with a rifle salute performed by the Marine Corps League, McLamore Detachment, and the playing of Echo Taps by the Community Band of Southeast Texas and a rendition of “God Bless America” by Rejmaniak.

“Even when the ship finally took its final dive to sink, the flag was still flying and that stayed with many of them,” Schwarz said. 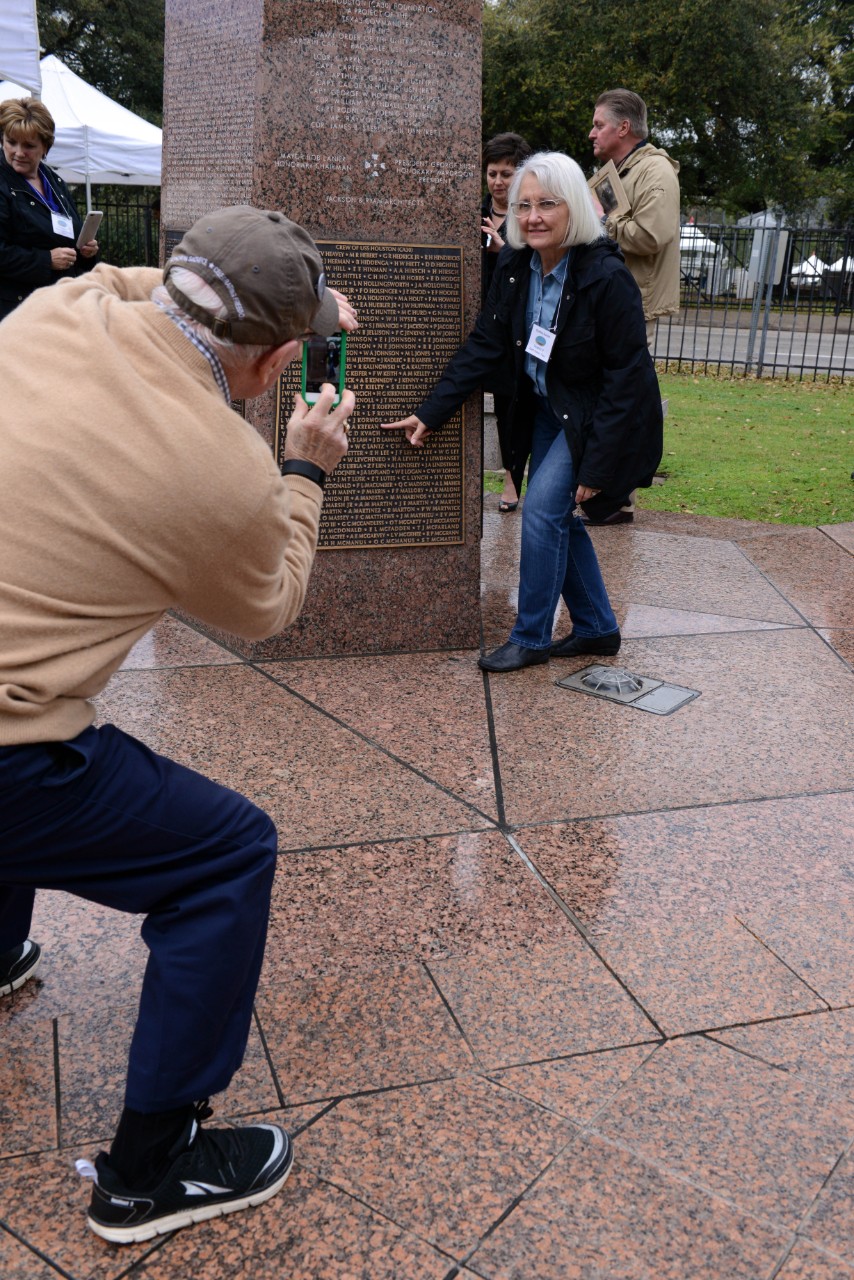 In the early morning of March 1, 1942, USS Houston and Australian light cruiser HMAS Perth were sunk by the Imperial Japanese Navy in the Battle of Sunda Strait.  During the engagement, more than 700 U.S. Sailors and Marines onboard the Houston and 350 Sailors and three civilians onboard the Perth, including the captains of both ships, lost their lives.  Only 368 Houston Sailors survived the sinking to become prisoners of war held throughout the rest of the war in grueling conditions; 79 died in captivity, and 289 survivors were liberated from various POW camps in September 1945.

For further readings, imagery and video on the USS Houston, visit https://www.history.navy.mil/browse-by-topic/ships/uss-houston.html