WASHINGTON – A historian with the Naval History and Heritage Command (NHHC) attended and spoke at a special seminar for African American/Black History Month at the Wilson Center, Feb. 23. 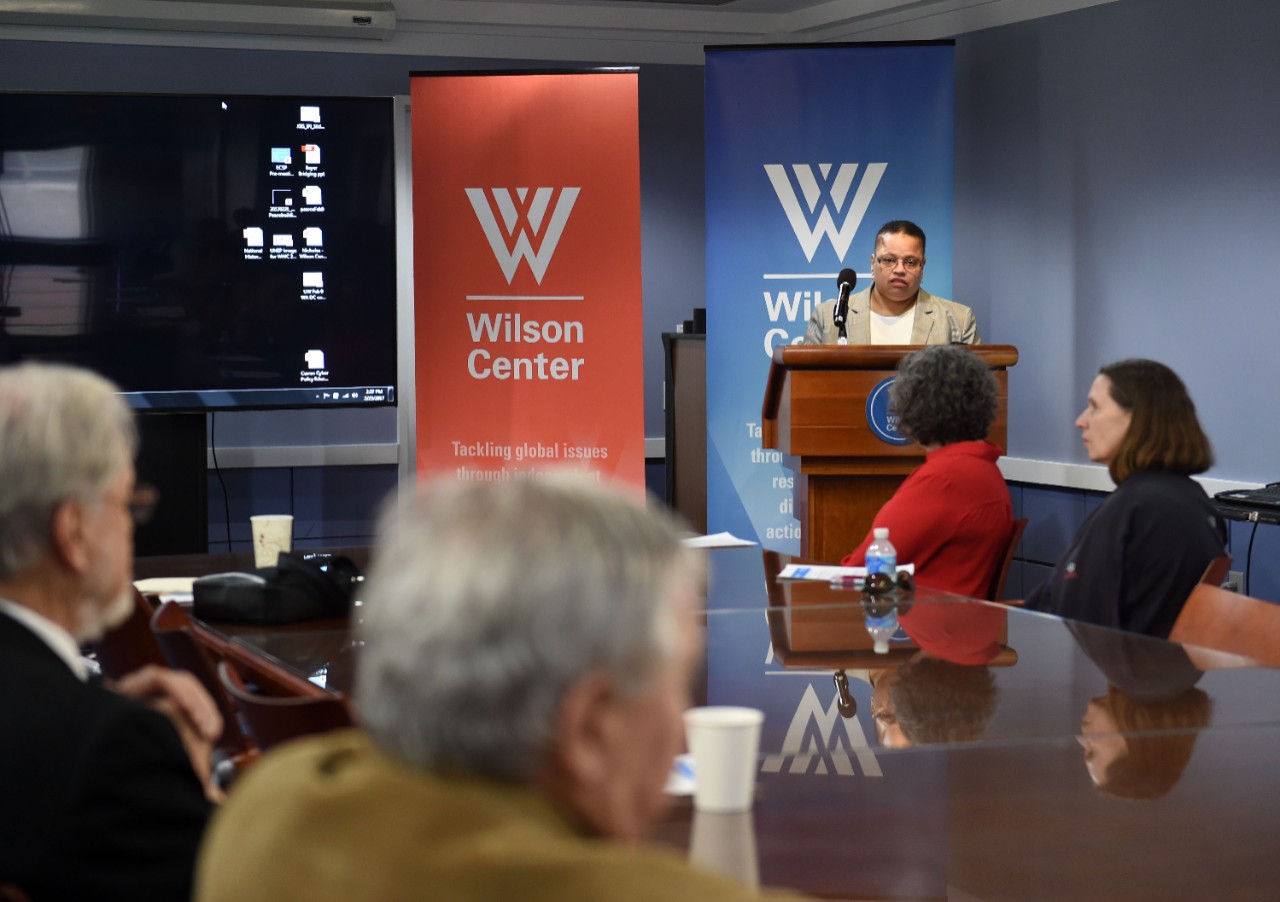 Description: WASHINGTON (Feb. 23, 2017) Naval Hisotry and Heritage Command Historian Regina Akers, Ph.D., speaks to an audience at the Woodrow Wilson enter on the history of African-Americans in the Navy from the period of the Civil War to today. The focus of her speech was that, although it didn’t last, the Navy was the only military branch that was non-segregated during the Civil War. She also discussed the many contributions of African-American Sailors to the Navy’s rich history and proud heritage. (U.S. Navy photo by Mass Communication Specialist 1st Class Clifford L. H. Davis/Released)

It’s a topic all three know well. Akers and Reidy worked together previously on an ABC Nightline broadcast on the subject that first appeared on July 3, 2001, and both have continued their studies since.

“It is an honor to serve on such a distinguished panel with Dr. Reidy and the other subject matter experts and to do so at the esteemed Wilson Center in Washington, D.C.,” said Akers. “I always enjoy the privilege of sharing the history of the United States Navy. I am especially delighted to highlight African Americans’ rich legacy of naval service and sacrifice since the American Revolution.  Blacks were often the first to volunteer even when war was waged for rights they were denied.”

Vines started the presentation by talking about his African-American experience in the Army before then showing the broadcast Akers and Reidy appeared in. Afterward, Akers and Reidy spoke for about 15 minutes each before the panel took questions from the audience.

A wide-ranging subject, Akers believes there is always more to learn about African American history, and in particular the black experience in the Navy. With names like John Henry Dick Turpin, Harriet Ida Pickens, Carl Brashear and Adm. Michelle J. Howard, the history of the Navy is replete with stories of African Americans who have overcome significant challenges in order to defend freedom as American Sailors.

"There is much to learn from African American’s patriotism, courage, and determination," said Akers.  "They did not let obstacles hinder them.  They remained focused on their goals and maintained professionalism and integrity despite the discrimination and racism they encountered.  Their careers present lessons in leadership, demonstrate how to learn from failure and success, remind us to be true to ourselves and emphasize the importance of helping others as you advance in rank.”

Subjects ranged from how there were 18,000 African American Sailors serving during the Civil War and, although it didn’t last, the Navy was the only military branch that was non-segregated during that time.  They also discussed how later, Admiral E. R. Zumwalt’s pushed to end segregation in the modern Navy with Z-Gram 66, and highlighted the many contributions of African-American Sailors have made to the Navy's rich history and proud heritage.  The talk lasted a little more than an hour.

“We asked for Dr. Akers, and all the speakers, too, specifically because of the quality of their work concerning African Americans during the time period,” said John Martin, a retired ABC News Correspondent and Public Fellow at the Center. “I was delighted to have her appear as one of the sources on the Navy.”

According to its website, the Wilson Center was “chartered by Congress as the official memorial to President Woodrow Wilson, is the nation’s key non-partisan policy forum for tackling global issues through independent research and open dialogue to inform actionable ideas for the policy community.”

NOTE TO MEDIA: For additional information about naval history, please contact the Naval History and Heritage Command’s Communication and Outreach division at 202-433-7880 or via email at NHHCPublicAffairs@navy.mil