SALT LAKE CITY – After spending eight months at the Senior Enlisted Academy (SEA) in Newport, Rhode Island, the bell of ex-USS Utah (AG 16) underwent conservation before its return to and upcoming rededication at the University of Utah.

For more than seven months, conservators at the Naval History and Heritage Command (NHHC) Collection Management Facility (CMF) dedicated more than 600 hours to conserving the 775-pound ship’s bell of Utah for future generations.

During the assessment of the overall structural stability and condition of the bell, the solid copper-alloy stand that was specially created for it in the 1960s was removed because it was damaging parts of the bell and providing only limited access to the interior for the restoration.

After further identifying potential condition issues and conducting analytical testing, conservators proceeded to use materials such as gentle abrasive powders, brass brushes and bronze wool to clean the surface.  By continuing in this manner, significant details such as foundry marks would not be lost due to overpolishing. 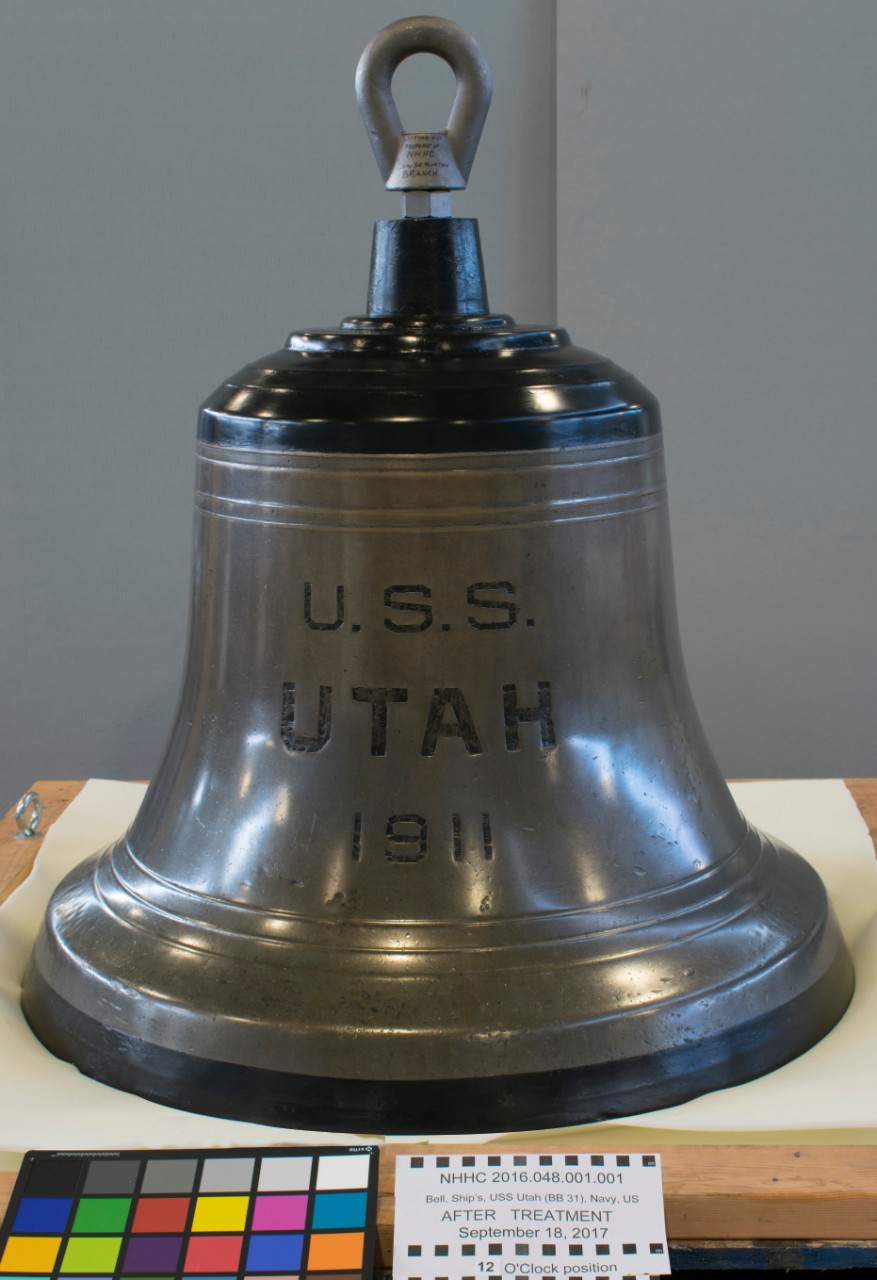 For other portions of the bell, where green corrosion had occurred, some unconventional methods were explored to include micro-abrasive blasting.  Delivered at 100 psi, conservators blasted the bell with potato starches which stripped the oxidization yet helped preserve the bells acquired bronzy patina of age.

“It was pretty miraculous to watch the bad corrosion products vanish while leaving the surface patina intact,” said Karl Knauer, a conservator for NHHC. “In the end, we used just over 11 pounds of potato starch, which took nearly 70 pounds of potatoes to produce.”

To finalize the overall cleaning and to stabilize the bell for future generations, multiple applications of a special wax coating were applied to the interior and exterior and new lifting hardware was installed to aid during transport and display.

“I think of the lives that it touched, the story that it represents and it personally means a lot to help preserve that,” said Melissa Swanson, conservator for NHHC.

“An object like USS Utah’s bell, with its beautiful imperfections, dents, and evidence of marine life that grew within the bell while submerged at Pearl Harbor, definitely inspire a great level of respect,” said David Krop, NHHC Conservation Branch Head. “We were honored and excited to perform this treatment on behalf of NHHC for the Navy and the American public.”

While at the SEA, the bell was housed in the hall named after Chief Watertender Peter Tomich, a posthumous Medal of Honor recipient for his actions on board USS Utah during the attack at Pearl Harbor on Dec. 7, 1941. 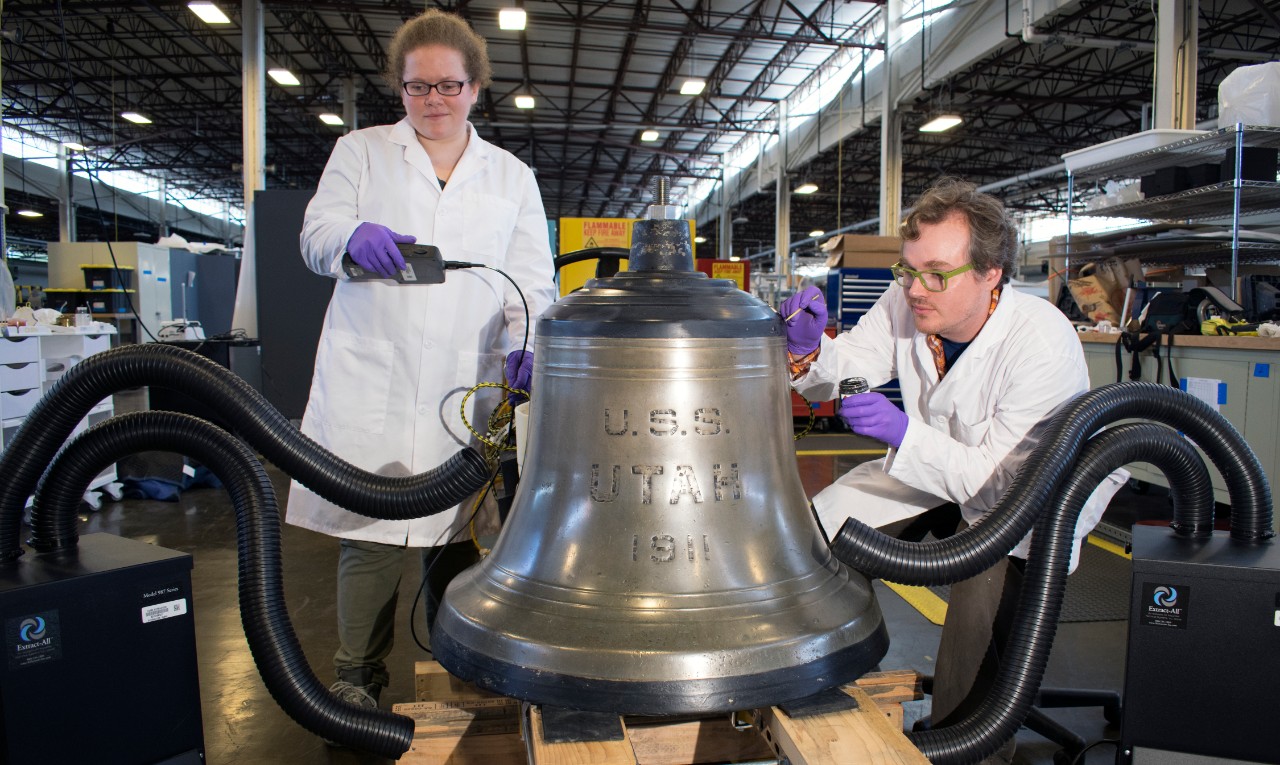 “We are thankful we had this opportunity to have the bell at the SEA and are excited for its return back the University of Utah,” said Command Master Chief Delbert Terrell.  “The future leaders who saw it will know it is there, its importance as an artifact, and ensure the history of USS Utah will never be forgotten.”

On Dec .7, 2018, the bell will be rededicated at the Naval Sciences Building at the University of Utah.

“The presence of the bell, immediately inside the main entrance to the Naval Science building, with the words ‘USS UTAH 1911’ inscribed, instantly reminds any passerby that the Navy, Utah and Pearl Harbor are inextricably linked,” said Capt. Mark Springer, commanding officer and professor of Naval Science at the University of Utah. 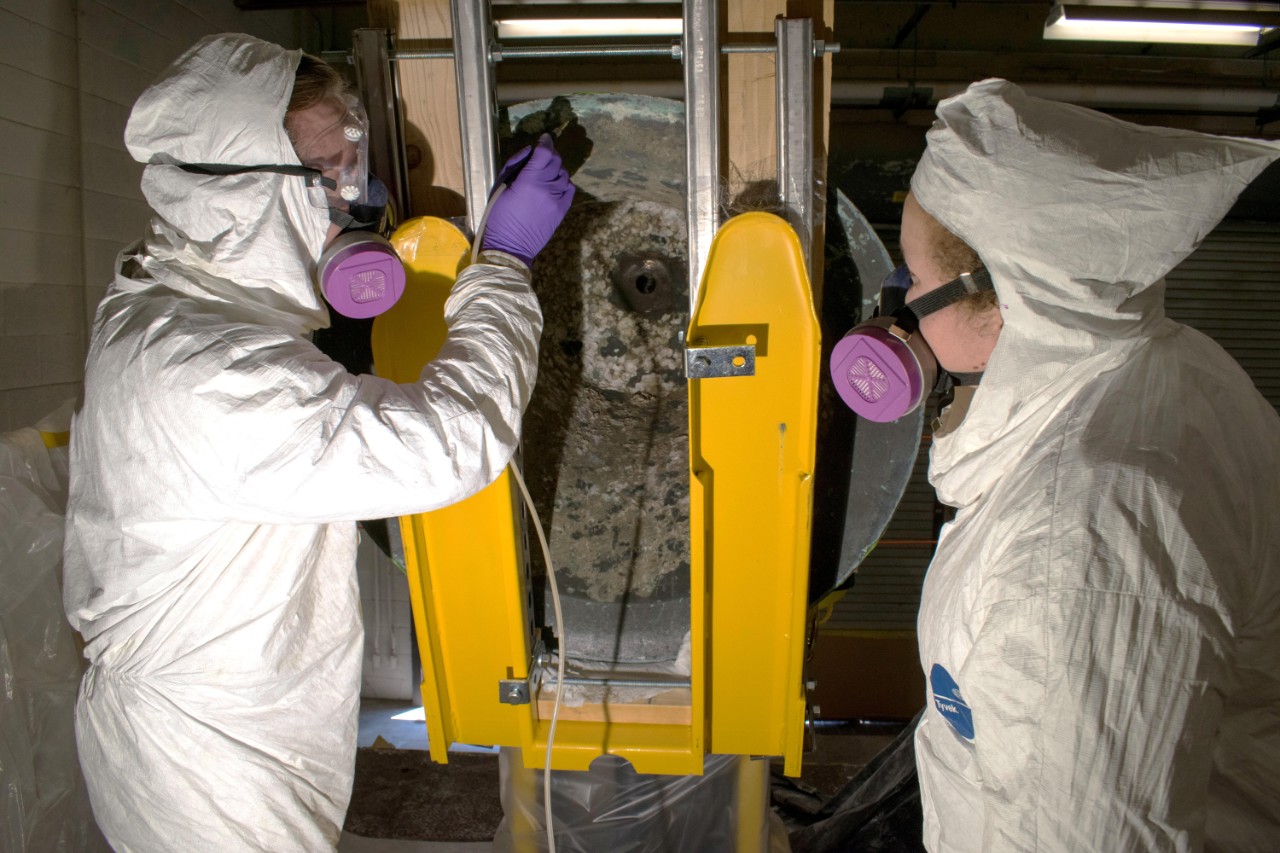 Not only is there a namesake connection between the state of Utah and the USS Utah, but loaning the bell to the University allows NHHC the ability to reach out to those states without an obvious Navy connection,” said Jeff Bowdoin, deputy head of NHHC's Curator Branch. “Generally, people don’t think about how a landlocked state may have a connection with the Navy, so it’s important that we strive to make those connections and better disseminate the history and heritage of the U.S. Navy.”

During the attacks at Pearl Harbor on Dec. 7, 1941, USS Utah was moored off Ford Island in berth F-11. At 8:01 a.m., the ship received a direct torpedo hit on the forward port side and immediately started to list.  By 8:12 a.m., the mooring lines snapped and Utah rolled over exposing her keel.  Hearing a knocking sound coming from within the ship, survivors quickly started rescue operations while Japanese aircraft still strafed the remaining Pacific Fleet, freeing ten men from the would-be tomb.

Utah was officially stricken from the Naval Register on Nov. 13, 1944.  Her partially submerged hull remains at Pearl Harbor.

For more on Navy Action Reports that tell the story of the Pearl Harbor Attack, visit http://usnhistory.navylive.dodlive.mil/?p=29971, or to learn more about the history of USS Utah, visit http://www.history.navy.mil/research/histories/ship-histories/danfs/u/utah.html.

Read about the bravery of Chief Watertender Peter Tomich and other Pearl Harbor Medal of Honor recipients here: http://usnhistory.navylive.dodlive.mil/?p=33096.