WASHINGTON – The Department of Justice today recognized the late Teresa Scalzo with the Ronald Wilson Reagan Public Policy Award for her lifelong dedication to achieving justice for victims and improving the justice system’s response to crimes at all levels of government. 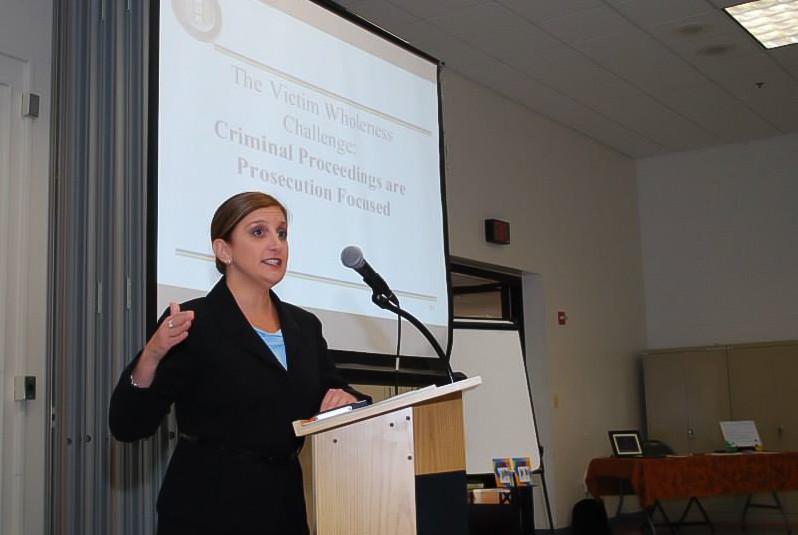 The award goes to individuals whose leadership, vision and innovation have led to significant changes in public policy and practice that benefit crime victims. She was honored during the National Crime Victims’ Service Awards ceremony in Washington, D.C.

Scalzo provided technical assistance and training to prosecutors to elevate their awareness of and commitment to the rights of victims. At the time of her death, she was the Deputy Director of the Trial Assistance Program of the Navy Judge Advocate General’s Corps where she served as the Navy’s expert on sexual assault prosecution. Her innovative practices have been widely adopted throughout the criminal justice system. Scalzo’s mother and brother accepted the award on her behalf.

“Although her death came much too early, Ms. Scalzo filled more than one lifetime with good works, laboring tirelessly to hold offenders accountable and secure for victims the justice they deserve,” said Acting Assistant Attorney General for the Office of Justice Programs Alan R. Hanson. “The Department of Justice is proud to honor her for her outstanding service and for her unflagging pursuit of justice on behalf of the injured and aggrieved.”

During the ceremony, the Justice Department also recognized 11 other individuals and organizations for their outstanding efforts on behalf of crime victims. Awardees were selected from public nominations in nine categories, including federal service, special courage, public policy and victim services.

The Department’s Office for Victims of Crime leads communities across the country in observing National Crime Victims’ Rights Week. President Ronald Reagan proclaimed the first Victims’ Rights Week in 1981, calling for greater sensitivity to the rights and needs of victims. This year’s observance takes place April 2-8, with the theme Strength. Resilience. Justice.