From Secretary of the Navy Public Affairs

In 1952, Petersen was commissioned as a second lieutenant in the Marine Corps. He would go on to fly 350 combat missions during the Korean and Vietnam Wars. He also went on to become the first African-American in the Marine Corps to command a fighter squadron, an air group and a major base.

Petersen retired from the Marine Corps in 1988 after 38 years of service. At the time of his retirement he was, by date of designation, the senior-ranking aviator in the Marine Corps and the United States Navy.

Petersen died last year at his home in Stevensville, Md., near Annapolis, at the age of 83.

This is the first ship to be named for Frank E. Petersen Jr.

"The courage and perseverance of Lt. Gen. Petersen throughout his distinguished and ground-breaking career make him especially deserving of this honor," said Mabus. "Those who serve aboard DDG 121 will, for decades, carry on the storied legacy of this Marine Corps hero."

Arleigh Burke-class destroyers conduct a variety of operations from peacetime presence and crisis response to sea control and power projection. DDG 121 will be capable of fighting air, surface and subsurface battles simultaneously, and will contain a combination of offensive and defensive weapon systems designed to support maritime warfare including integrated air and missile defense and vertical launch capabilities.

Construction began on the future USS Frank E. Petersen Jr. (DDG 121) April 27 at the Huntington Ingalls Industries shipyard in Pascagoula, Miss., and the ship is expected to enter the Navy fleet in 2020.

The ship will be 509 feet long, have a beam length of 59 feet and be capable of operating at speeds in excess of 30 knots.

Additional information about the Arleigh Burke-class destroyers is available online at http://www.navy.mil/local/DDG/.

For more news from Secretary of the Navy Public Affairs, visit http://www.navy.mil/SECNAV/. 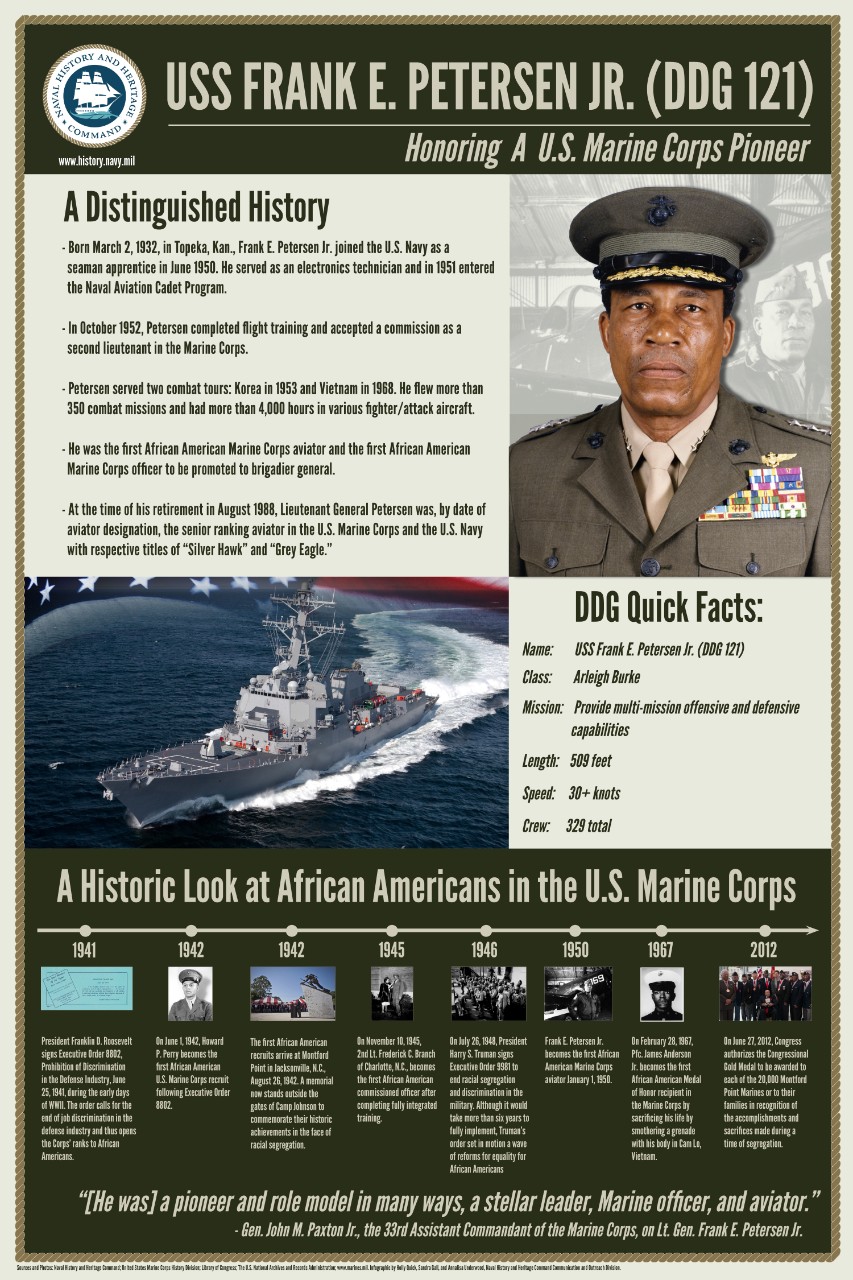