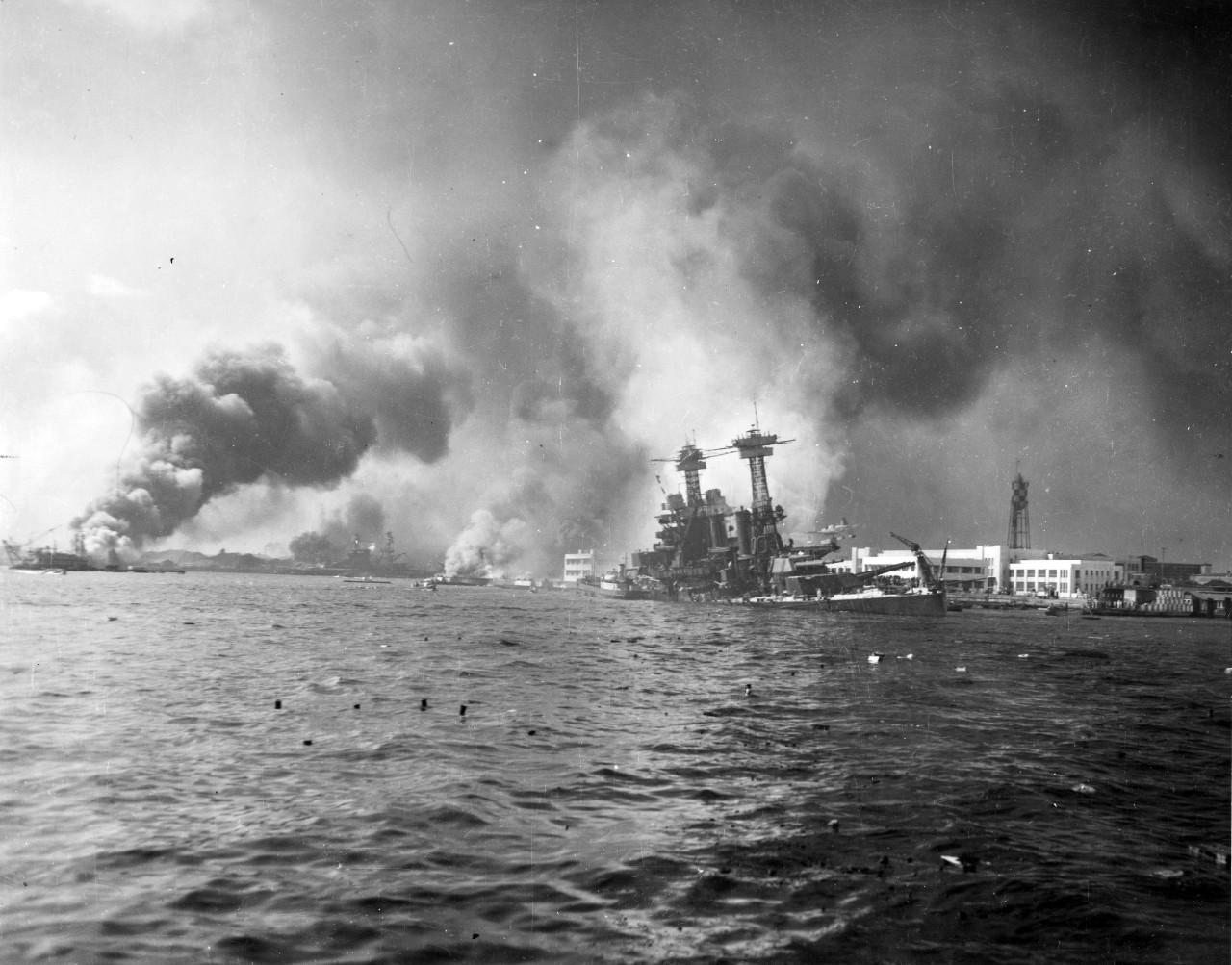 Caption: USS California (BB-44) slowly sinking alongside Ford Island as a result of bomb and torpedo damage, 7 December 1941. USS Shaw (DD-373) is burning in the floating dry dock YFD-2 in the left distance. USS Nevada (BB-36) is beached in the left-center distance. Official U.S. Navy Photograph, now in the collections of the National Archives.

From the Naval History and Heritage Command, Communication and Outreach Division

For the U.S. Navy it will begin four years of commemorative events and close review of the history of what was a transformative event for the Navy, the nation and the world.

“World War II history has always been of intense interest to both our service and the country at large -- and for very good reason,” said Naval History and Heritage Command Director Sam Cox.  “It was a worldwide conflict with existential consequences that continue to unfold, and it affected every American.  While the broad strokes of the war are familiar from cinema, books, video games, and popular culture, this anniversary is a unique opportunity to delve deeper into the events in real time.”

As U.S. Navy ships and units around the globe hold commemorative World War II events, the Naval History and Heritage Command will provide historical and commemorative support enabling the fleet to remember the past and inspire the future.  This will include:

Cox believes studying the events in the order and pace at which they actually happened will allow Americans to get away from a rote "date and event" view of history.  He says the intent is to dig deeper, re-discovering past lessons and shaping new ones. Equally important are the amazing stories of dedication and sacrifice during the war that will inspire Sailors and the rest of America today.

“The Pearl Harbor attack alone gives us the extraordinary valor of Sailors such as Chief Boatswain Edwin Hill, then-Warrant-Officer Machinist Donald Ross, and Machinist's Mate First Class Robert Scott,” he said.  “Events like the Battle of the Atlantic and the defense of Wake Island provide us hard-won lessons on intelligence, command and control, strategy, decision making, operations security, logistics, and more.  Every day that the Navy gets underway on the same seas and straits where these battles unfolded, we must ‘use history to understand not only what we did right, but what we did wrong, to not forget the hard lessons we learned in the past and to think more critically, with fresh insights, about the future .’”

NHHC’s website features a World War II collection page (www.history.navy.mil/wwii) that will continue to grow over the next four years where visitors will find links to information and resources that tell the story of the world at war and the role played by America’s Navy.

Kicking things off is an opportunity to honor our past and reflect on the toughness, initiative, accountability and integrity of American Sailors, service members and civilians at Oahu on Dec. 7, 1941.

To assist those commemorating the event in providing their audiences with reliable, accurate information when developing content connected to the milestone, easy-to-pull video sound bites of Naval History and Heritage Command (NHHC) historian Robert J. Cressman discussing elements of the attack on Pearl Harbor and their historical impact are now available for free use.

It was 6 a.m. on Dec. 7, 1941, when six Japanese carriers launched a first wave of 181 planes composed of torpedo bombers, dive bombers, horizontal bombers and fighters toward Hawaii. The Japanese aircrews achieved complete surprise when they hit American ships and military installations on Oahu shortly before 8 a.m. More than 90 ships were anchored in Pearl Harbor, but the Japanese's primary targets were the eight battleships anchored there. Seven were moored on Battleship Row along the southeast shore of Ford Island while the USS Pennsylvania (BB 38) lay in dry dock across the channel.

The attack ended shortly before 10 a.m., less than two hours after it began, and the American forces paid a heavy price. Twenty-one ships of the U.S. Pacific Fleet were sunk or damaged, 188 aircraft destroyed and 159 damaged, the majority hit before they had a chance to take off. American dead numbered more than 2,000 with more than 1,000 military and civilian wounded. The attack which horrified a nation was the catalyst that brought America into World War II.

Cressman was recorded answering the following questions, available for download: