The loss of Thresher forever changed the U.S. Navy’s submarine force and the life of one young Sailor.

At the time, Capt. Paul “Bud” Rogers Jr. was a recently commissioned officer who had only been at his command for a few months when he was scheduled to go aboard Thresher as part of a weapons inspection team, but the leadership team decided to send someone more senior, said Rogers’ son-in-law, retired Cmdr. Fred Henney. “Bud lived the rest of his life with the knowledge that someone else died in his place and I believe it drove his decision to be buried at sea.”

While on routine operations Wednesday, Nov. 30, 2016, at the site where Thresher was lost, the Los Angeles class, fast-attack submarine, USS Springfield (SSN 761) held a burial at sea where Rodgers’ last wishes were fulfilled as he was sent on his eternal patrol alongside the submarine and Sailors he always felt connected to. 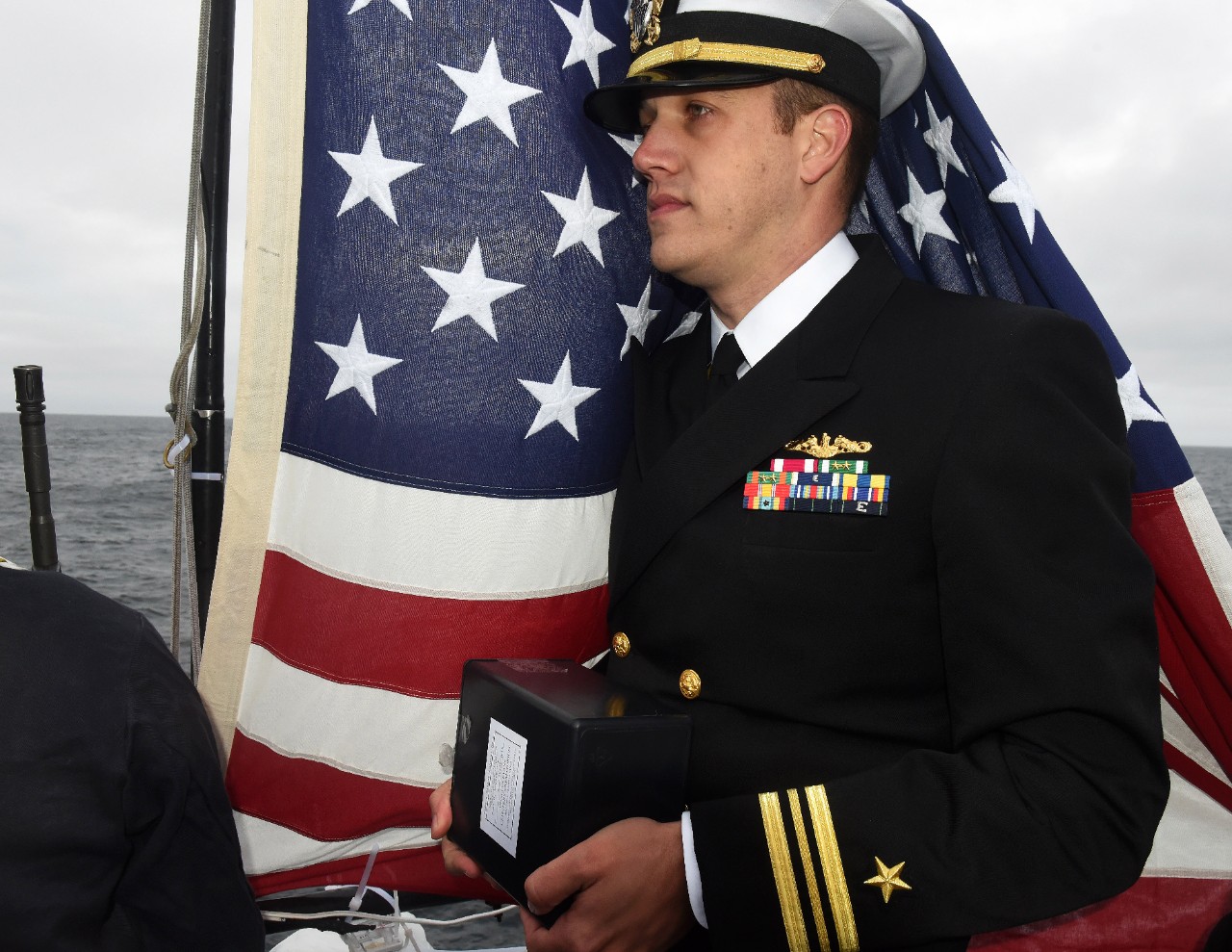 Caption: ATLANTIC OCEAN - (Nov. 30, 2016) Los Angeles-class, fast-attack submarine USS Springfield (SSN 761)'s Executive Officer Lt. Cmdr. Rene Cano, holds the remains of Capt. Paul "Bud" Rogers Jr. during a burial at sea ceremony held aboard Springfield. The ceremony was held at the location USS Thresher (SSN 593) was lost at more than 50 years ago. As a newly commissioned officer, Rogers was scheduled to be aboard Thresher as part of a weapons evaluation team member, but was replaced by a senior member approximately one week before Thresher was lost. (U.S. Navy photo by Chief Petty Officer Steve Owsley/Released).

“My husband loved submarines and he loved serving on them,” said Rogers’ widow, Barbara. “He went from being a boy scout to a submariner.”

According to his obituary, Rogers served in the U.S. Navy for 41 years. He served as a Fire Controlman aboard the diesel submarines USS Sea Cat and USS Bang, then aboard one of the Navy’s first ballistic missile submarines, USS Robert E. Lee. He was commissioned as an officer in 1963 and became one of the first-ever limited duty officers to be promoted to the rank of captain.

According to Barbara her husband joined the Navy during the Korean War and took part in the Blockade of Cuba during the Bay of Pigs Invasion.

According to Barbara they were always stationed on the East Coast, from Key West, Fla. to Maine.

“It was a sad time in Groton, when the Thresher was lost,” said Barbara. “I never saw my husband cry before, but he was crying when it went down.”

She said, “He always said he wanted to be buried at sea, but particularly after the Thresher went down.”

Rumery read the biographies of Rogers and three other Navy veterans who had requested a burial at sea. Then he read scripture before each Sailor received a three-round gun salute in honor of their service. The ceremony ended with a playing of Taps and the Sailors being committed to the sea.

When speaking about her husband’s thoughts on being laid to rest with the Sailors of USS Thresher, Barbara said, “I think he would have been very, very happy. He felt bad all these years, because he felt he should have gone down with the ship. I feel that he would have felt like he was where he belonged.”

After the ceremony Spillner reflected, “It’s an absolute honor as captain of USS Springfield to be a small part of bringing Capt. Rogers to his final resting place as we transit to Portsmouth Naval Shipyard for our scheduled maintenance availability. The submarine force changed on April 10, 1963 and 100 years from now Submariners will still know the name Thresher.”

Thresher was built at the Portsmouth Naval Shipyard in Kittery, Maine and homeported in Groton, Conn. The Navy believes a leak sprayed sea water on an electrical panel, which caused Thresher’s nuclear reactor to shut down.

The Thresher’s loss resulted in the SUBSAFE program which led to a series of design modifications, training improvements and submarine safety criteria. The program, which was established approximately two months after the loss of Thresher, is still in place today.