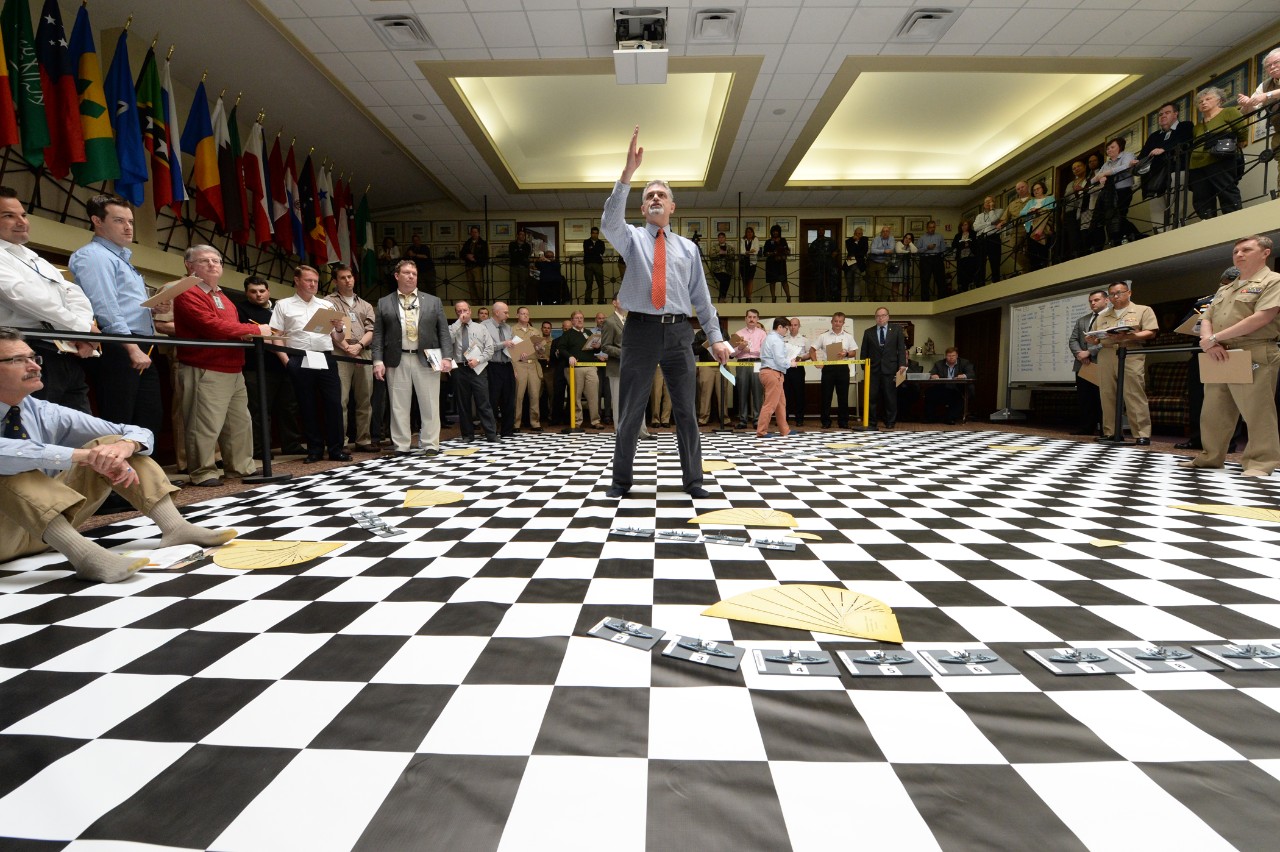 The game employed the same methods and technology used a century ago to understand the maritime strategy and tactics in the 1916 World War I maritime encounter known as, the Battle of Jutland.

The Battle of Jutland was fought between Great Britain and Germany off the coast of Denmark and was the largest maritime engagement of World War I. The encounter was studied closely during the time between the two world wars at NWC and was the basis for much of the naval strategy used in World War II.

“The idea here was to put together a memorial event that would commemorate the centenary of Jutland but at the same time highlight what that battle meant to the Naval War College and our education efforts,” said Rear Adm. P. Gardner Howe III, president NWC. “It created an experience that tied us to our past while getting us to think about our future. It exceeded my expectations.”

Reenacting the Battle of Jutland was a valuable learning tool for the officers who would fight World War II.

“The lessons that were derived from the Battle of Jutland after the First World War, were the lessons that were important to understanding the personalities and strategic perspectives of the five-star admirals who won the Second World War,” said Dave Kohnen, an instructor in the College of Operational and Strategic Leadership and deputy in the Maritime History Department at NWC who helped arranged the reenactment.

This reenactment pitted Howe, acting as commodore of the German fleet, against Samuel Cox, director Naval History and Heritage Command, who led the British forces.

The reenactment used wargame techniques from that time to include staging the game on a large floor space and physically maneuvering game pieces representing ships. All movement calculations were completed using period technology. 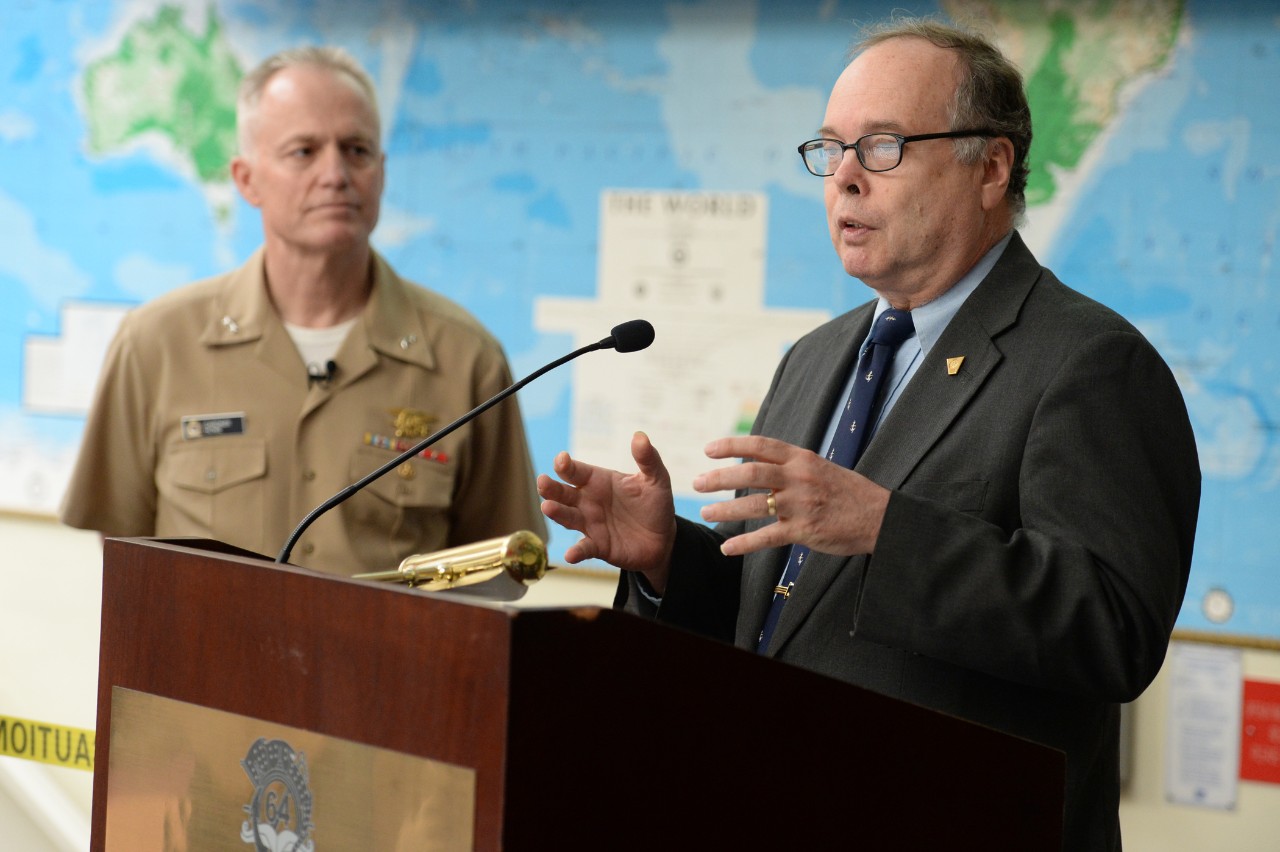 Cox, a retired rear admiral, said Jutland was a vital part of training the leaders of World War II.

“Although the United States Navy was not involved in the battle,” said Cox, “students and staff at the Naval War College spent a great deal of time after World War I analyzing Jutland, often using wargames. The conclusions drawn from analyses of Jutland and World War I helped shape the U.S. Navy’s warships, tactics and doctrine in the years leading up to World War II, including War Plan Orange, the Navy’s blueprint for a Pacific War against Imperial Japan.”

The winner of the original Battle of Jutland has been disputed as both Great Britain and Germany claimed victory.

With the benefit of a historical perspective, Kohnen says that one of the winners of the Battle of Jutland wasn’t even involved in the encounter.

“I would argue that the United States Navy won the Battle of Jutland even though they weren’t there,” he said. “Because during the 1920s and the 1930s they studied the battle, and other battles, in such detail that they were able to glean strategic, operational and tactical lessons that they were able to apply in the Second World War.”

According to Angus Ross, professor in the Joint Military Operations department for the College of Distance Education at NWC, this battle heralded the new industrial age where victory is determined by economic domination as well as victory on the seas.

“Times had moved on. The Navy was formerly the prime instrument of [winning battles] for Great Britain,” said Ross. “But the means of winning and the method of winning were very different. You couldn’t just defeat a fleet of battleships at sea and ensure that victory was achieved. It was one of those battles that was inevitable but at the same time totally regrettable.”

Recreating the Jutland wargame required some digging and good luck to find out how the original game was played by students almost a century ago.

While looking for information on the original wargame, NWC archivist Dara Baker happened on a historic find in the archives.

“The reenactment all started with the idea of putting together an exhibition to acknowledge it has been 100 years since the Battle of Jutland,” said Baker. “To do that, my staff and I started looking through all of the material we have in our collection on the battle. When we were looking, I found this box titled, "War Game Outfit," and I was like, ‘Huh, I wonder what that is.’ I pulled the box out and opened it up and there were all these pieces, it was just fantastic.”

Baker had discovered that the archives’ collection contained much of the original game from almost a century ago.

“We unpacked the whole thing and realized we had all the [game] pieces created in the 1930s for the Jutland game,” Baker added. “By knowing what the pieces looked like, it allowed us to recreate those and actually put on this event.”

The game pieces used for the reenactment were recreated for the event and modeled after the older pieces from the archives.

Video of the reenactment will be posted on the college's Facebook page at http://www.facebook.com/navalwarcollege on May 31, the 100-year centenary of the Battle of Jutland.