Share
Connect
2016
»
March
»
A Corsair Comes Home
A Corsair Comes Home
Near the end of World War II most carrier aircraft that flew missions over Japan would strike their targets and return. Generally those that didn’t come back after a mission never would, but for one Corsair coming back just took a little longer.
Location: 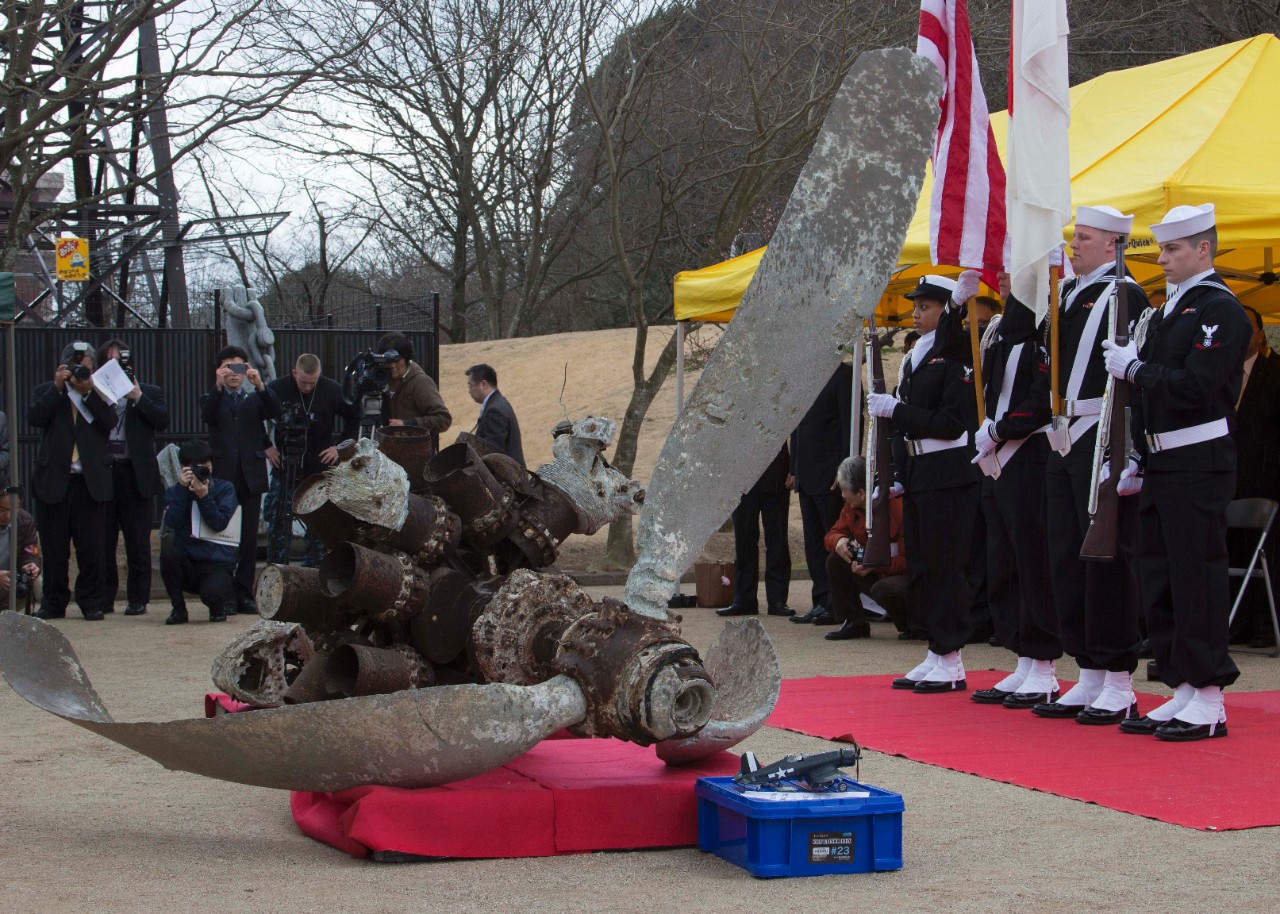 Caption: SAIKI CITY, Japan (March 6, 2016) The Commander U.S. Fleet Activities Sasebo Color Guard renders honors at the departure ceremony for parts of a World War II F4U-1D Corsair fighter-bomber held at Yawaragi Peace Memorial Hall in Saiki City, Japan. The parts are from a Fighter Squadron (VF) 10 Corsair that was ditched off Saiki on March 18, 1945 after attacking an Oita military airfield. They were salvaged from the water and displayed until the decision was made to return them to the U.S. Navy as a goodwill gesture marking seven decades since the end of World War II. (U.S. Navy photo by Mass Communication Specialist 1st Class David R. Krigbaum/Released)

Near the end of World War II most carrier aircraft that flew missions over Japan would strike their targets and return. Generally those that didn’t come back after a mission never would, but for one Corsair coming back just took a little longer.

On March 18, 1945 19 F4U Corsair fighter-bombers, including those of Fighter Squadron (VF) 10, took off from USS Intrepid (CV 11). Since their activation in 1942, the Grim Reapers of VF 10 had flown missions across the Pacific, fighting over Guadalcanal, the Marshalls and the Philippines.  On this particular day, they would bring the war fought abroad home to the Japanese. Their target was a naval air base on the northern end of Kyushu, the southernmost of Japan’s home islands.

The mission was one of hundreds flown by U.S. Navy and Army Air Force aviators in preparation for the invasion of Okinawa, an island closer to Kyushu than much of Kyushu is to Tokyo. By attacking Japanese airfields in range of that island they could deny air support to the defending garrison.

The Grim Reapers hit their target but at a cost of two aircraft flown by two new pilots. One Corsair hit the ground during the attack itself and the other, damaged in the air raid, made an emergency water landing off the coast of Saiki. The plane sank and according to U.S. historical documentation, the pilot’s body was never recovered.  However, the Saiki City Board of Education claims that pilot body parts were washed ashore and local residents held a funeral for them. 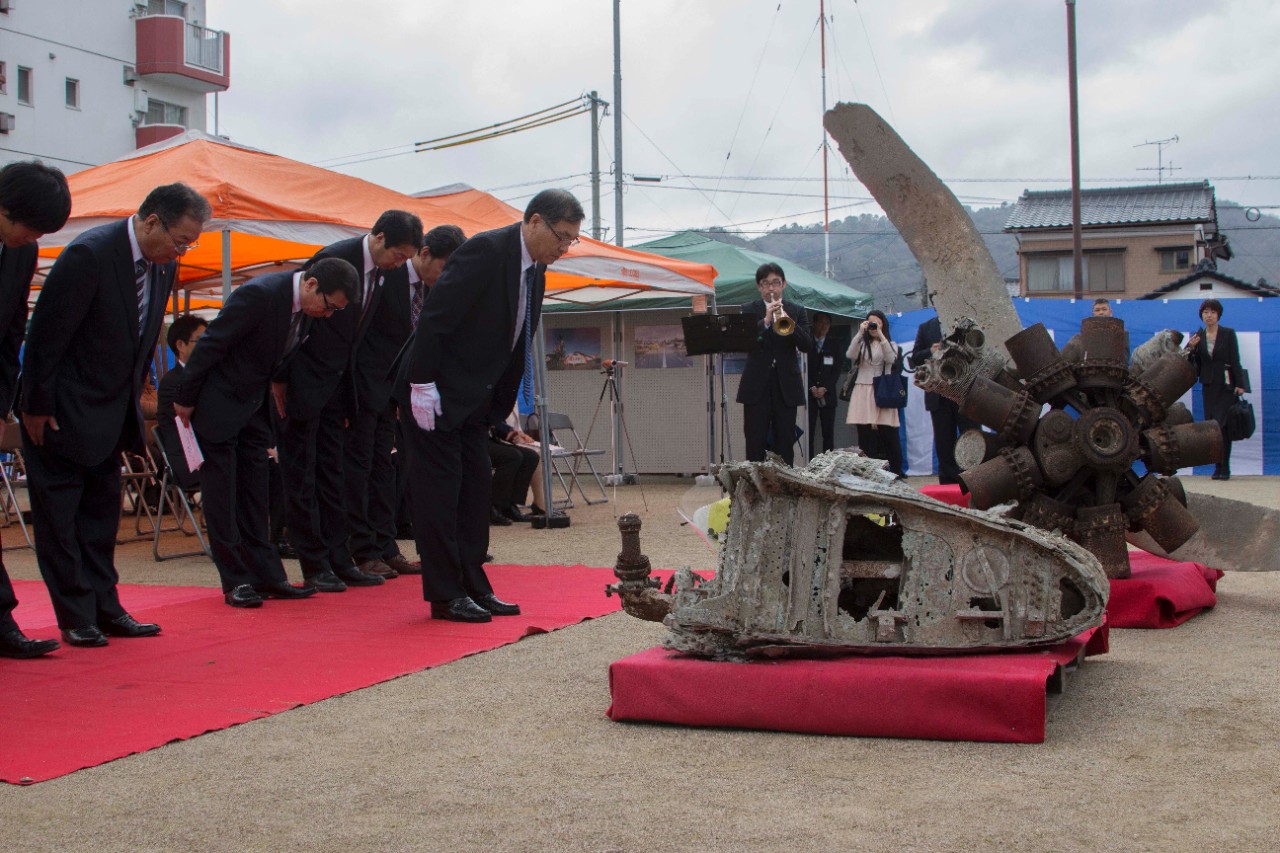 Caption: SAIKI CITY, Japan (March 6, 2016) Kazuya Fujita plays requiem trumpet as Saiki City and Oita Prefecture dignitaries bow in memorial to the pilot of this F4U-1D Corsair fighter-bomber at the departure ceremony held for the aircraft parts at Yawaragi Peace Memorial Hall in Saiki City, Japan. The flowers honor the aircraft's pilot whose body was never recovered. The parts are from a Fighter Squadron (VF) 10 Corsair that was ditched off Saiki on March 18, 1945 after attacking an Oita military airfield. They were salvaged from the water and displayed until the decision was made to return them to the U.S. Navy as a goodwill gesture marking seven decades since the end of World War II. (U.S. Navy photo by Mass Communication Specialist

The Corsair was rediscovered by accident almost fifty years later when the propeller and engine became ensnared in a fisherman’s net. A local citizen funded an attempted recovery of the rest of the aircraft, but in the end only the engine, propeller and part of a wing were salvaged. These items were put on display in 2007 at Saiki’s Yawaragi Peace Memorial Hall alongside the parts of other aircraft from the Pacific War.

In 2015, the decision was made to return the Corsair parts to the United States as a goodwill gesture on the 70th anniversary of the war's end. Saiki City's intention was to return it to the aircraft carrier that launched it 70 years ago, USS Intrepid.

If the Corsair had been launched from almost any other aircraft carrier except Intrepid, the salvaged pieces may have stayed in Japan without a carrier to return to. Only four of the 24 Essex-class aircraft carriers remain, one of which is USS Intrepid. Retired for the last time in 1974, the former warship is now the Intrepid Sea, Air & Space Museum in New York City.

After contacting Intrepid Saiki’s plan hit a snag. Though it had launched the aircraft in 1945, Intrepid could not accept its return as the Corsair, if even only a few of the plane parts, as they were still legally U.S. government property. A U.S. Navy warplane, no matter how long ago or where it was downed is still owned by the government and protected under the Sunken Military Craft Act. Redirected to the U.S. Naval History and Heritage Command (NHHC), Saiki worked with them to return the parts and prepare a proper sendoff.

On March 6, 2016, Saiki City officially returned the parts to the United States in a departure ceremony held at Yawaragi in Saiki City. More than fifty people attended, including several members of Japan’s Diet, the national legislative body equivalent to the U.S. Congress.

“The people of Saiki impressed me with their strong support of the U.S. Navy. We were there to receive pieces of an aircraft that did a lot of damage to their city during World War II, yet many came up and personally thanked me for 70 years of peace and stability,” said Ovios. “The large effort to organize this event and to arrange the delivery of the parts back to the United States is indicative of their appreciation and the pride they take in our alliance.”

At the end of the ceremony, the parts were loaded onto a truck for transport. A trumpeter played the Star Spangled Banner as the assembled crowd waved good bye to a piece of history that had been with Saiki for 70 years.

Soon the Corsair parts will be back in the United States where they will be received by NHHC Underwater Archaeology Branch (UAB). The UAB was established to manage the Navy’s massive collection of 3,000 ships and 14,000 aircraft in the world’s oceans and advises the NHHC and Navy on matters related to underwater archeology and historic preservation.

The conservation team at the Archaeology & Conservation Laboratory will assess the condition of the artifacts and determine what treatment is necessary to stabilize them. The parts will also be documented and the data gathered will be cross-referenced with NHHC records to learn more about them.

Once stabilized, the artifacts will be made available for public display through the UA Archaeological Artifact Loan Program. Currently 80% of their artifact collection is on loan to various institutions throughout the country, so this Corsair may return to USS Intrepid after all.

“These aircraft components represent an important era in U.S. Navy history and further serve as a memorial to the sailors who served aboard USS Intrepid and in the Pacific fleet during World War II,” said Kate Morrand, NHHC Archaeology & Conservation Laboratory director. “As conservators, we feel humbled to have the responsibility to preserve and interpret these materials for future generations and honor that memory.”