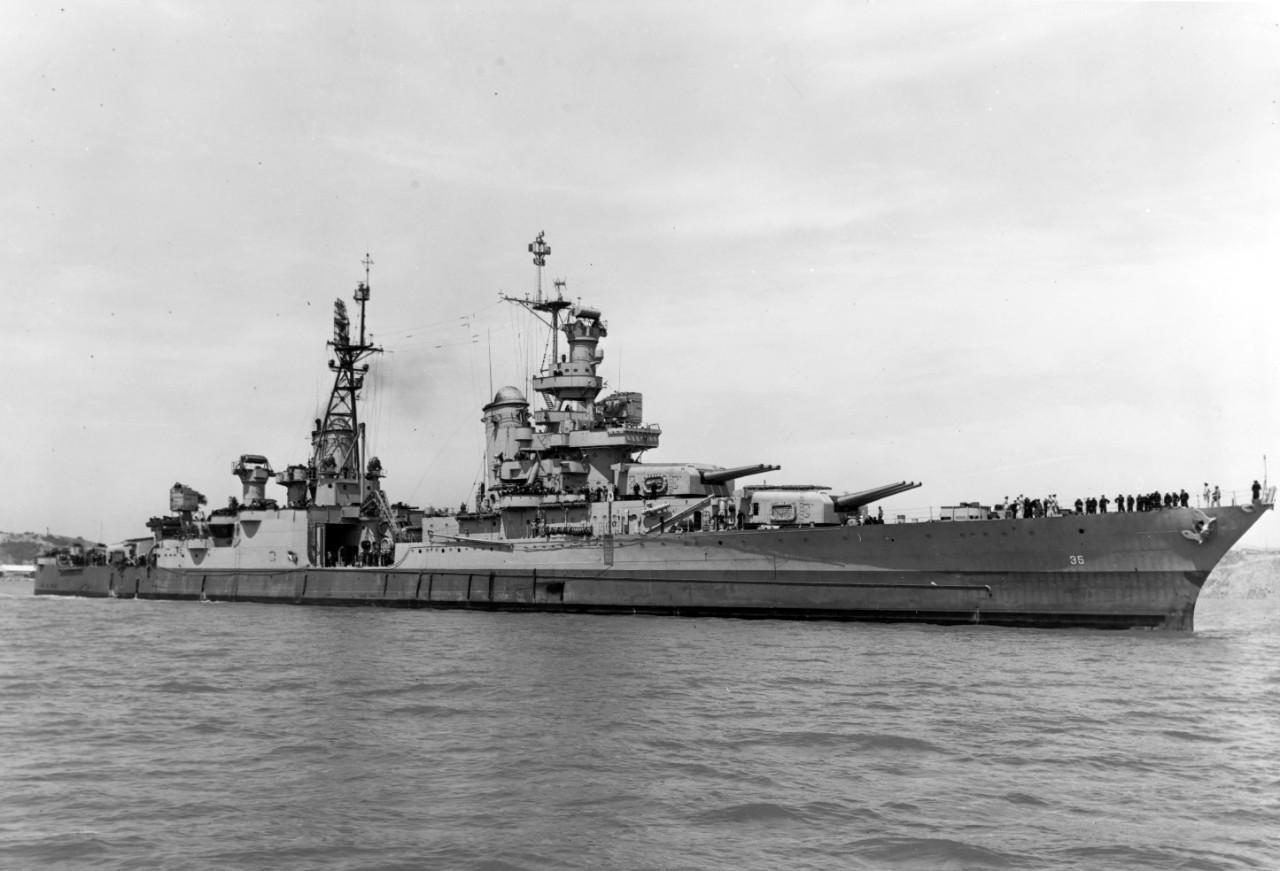 Caption: USS Indianapolis (CA-35) is shown off the Mare Island Navy Yard, in Northern California, July 10, 1945, after her final overhaul and repair of combat damage. The photo was taken before the ship delivered atomic bomb components to Tinian and just 20 days before she was sunk by a Japanese submarine. (U.S. Navy Photo/RELEASED)

By, Naval History and Heritage Command Communication and Outreach Division

In the final days of the war, Indianapolis completed a top secret mission to deliver components of the atomic bomb used in Hiroshima to U.S. forces in the theater. After dropping those components off at Tinian in the Marianas Islands, Indianapolis headed to Leyte, an island in the Philippines, when it was torpedoed and sunk by a Japanese submarine just after midnight on July 30, 1945. Around 800 of the ship’s 1,196 Sailors and Marines survived the sinking, but after four to five harrowing days in the water, suffering exposure, dehydration, drowning, and shark attacks, only 316 survived.

While reviewing the Navy’s holdings and other information related to Indianapolis, NHHC historian Richard Hulver, Ph.D., found a blog post and photo online that recounted the story of a World War II Sailor whose ship passed Indianapolis less than a day before the ship was sunk. This corroborated an account by Indianapolis Captain Charles McVay, III that his ship passed an unspecified tank landing ship (LST) approximately 11 hours prior to the sinking. Hulver located the Sailor’s service record from the National Personnel Records Center which identified the Sailor as a passenger on tank landing ship USS LST-779 during the period in which Indianapolis sank. That sent Hulver to the National Archives where LST-779’s deck logs confirmed the story. 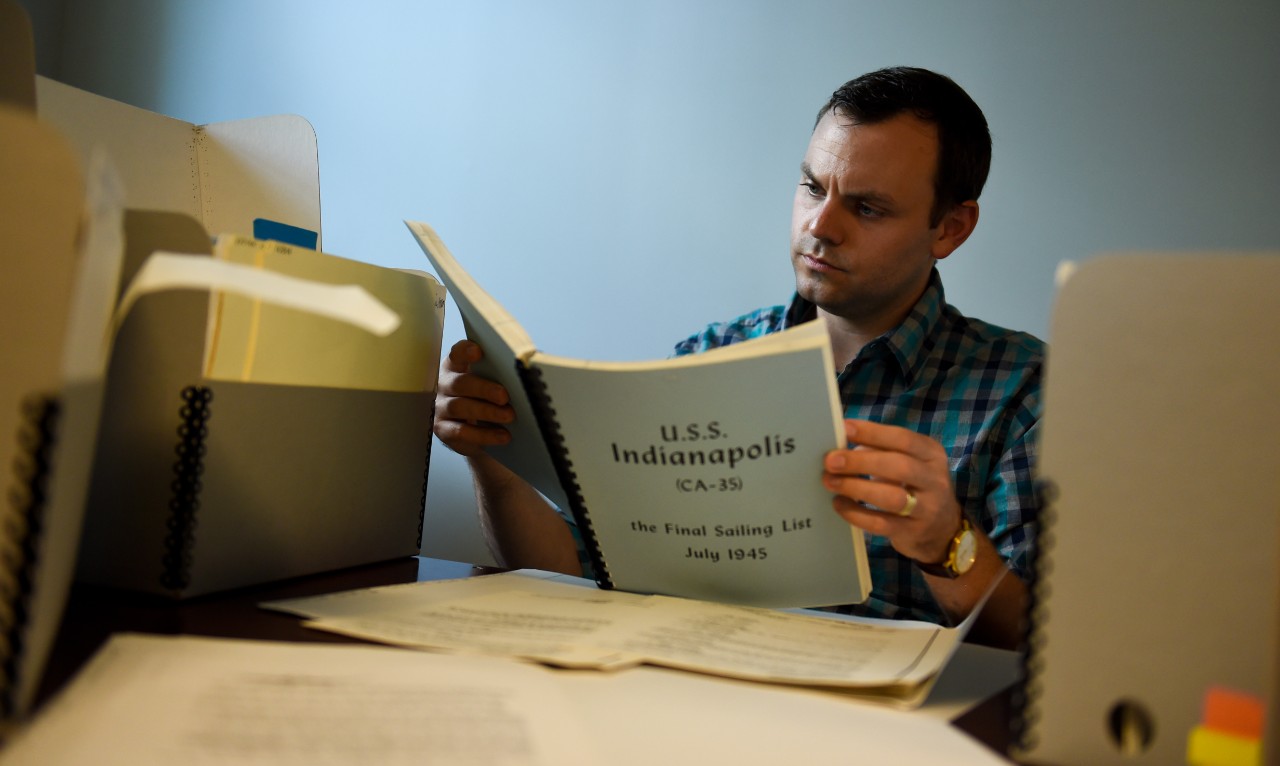 Caption: WASHINGTON (July 11, 2016) — Dr. Richard Hulver, an historian with the Naval History and Heritage Command in Washington D.C., reads up on USS Indianapolis, July 11. In researching the ship, Hulver found additional information that helps narrow down the possible places where the ship sank. Indianapolis delivered key components of the atomic bomb to U.S. forces in the Marianas Islands; afterwards she was struck by a Japanese torpedo with only 316 crewmembers surviving the ships sinking. (U.S. Navy photo by Mass Communication Specialist 1st Class Eric Lockwood/Released)

The meeting between Indianapolis and LST-779 has been seemingly overlooked in previous studies of Indianapolis.

“It’s obviously gratifying to find a part of the story that hasn’t been told—to discover a new part of an important episode in U.S. naval history,” said Hulver. “But more importantly, the Navy has an obligation to honor the sacrifice of those who serve. NHHC does this by expanding the body of knowledge about our Navy’s history.”

“The LST-779 data sheds new light on where Indianapolis was attacked and sunk." Hulver continued,"This brings us closer to discovering the final resting place of the ship and many of her crew. It has been humbling and an honor to learn more about the crew of Indianapolis and do my small part to ensure that their story lives on. I’m honored to a part of that effort.”

Hulver summarized the historical literature, conducted archival research, and prepared a report incorporating the new information gleaned from LST-779’s brief encounter with Indianapolis. NHHC’s summary was published online as part of a project to consolidate the entirety of NHHC’s holdings on Indianapolis into an easy-to-navigate, online resource (http://go.usa.gov/xr57m) prepared in advance of the 71st anniversary of the ship’s loss July 30.

In addition to the summary of Hulver’s research, the collection page includes links to high-level intelligence not made available to the crew because of operational concerns, rescue operations, the subsequent investigation and court martial proceedings against the ship’s captain, artwork, Navy photos of survivors, oral histories and much more. Research into the sinking is ongoing. NHHC's holdings and online resources will be updated as new information becomes available.

Although the loss of Indianapolis was a tragic moment, the ship and crew had served faithfully throughout the war frequently serving as the flagship of the U.S. Fifth Fleet, earning 10 battle stars, and successfully completing of a top secret mission that directly contributed to the end of WWII. The loss of the ship also resulted in several sweeping changes for the U.S. Navy including improvements to reporting procedures for ship arrivals and non-arrivals, establishing requirements for ships of a certain size to be escorted, and a reevaluation of the lifesaving equipment used on combatant ships.

The sinking of Indianapolis was dramatically retold by Actor Robert Shaw in the 1975 blockbuster motion picture Jaws. There have also been a number of documentary productions and screen adaptations of the story, some more accurate than others.