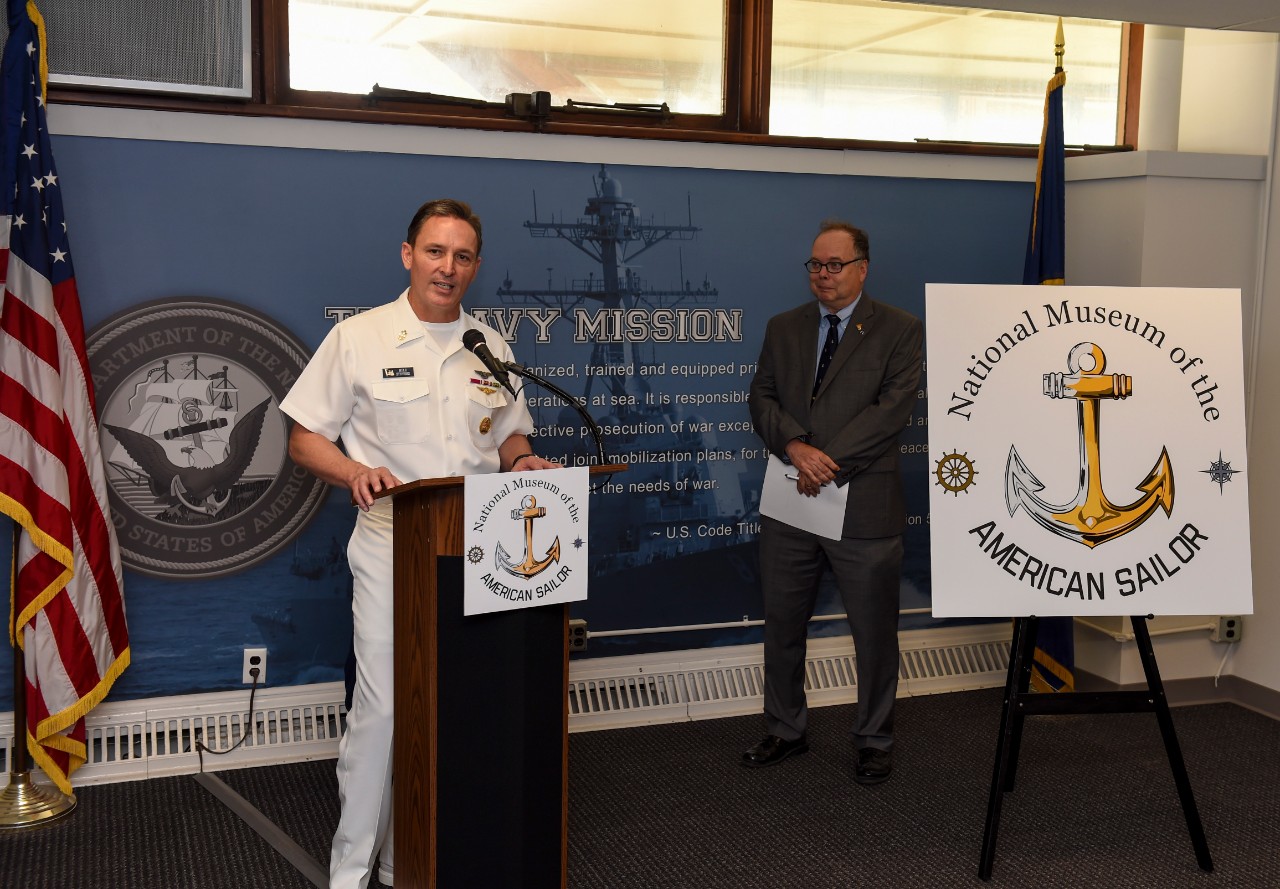 Description: 160704-N-TH437-033 GREAT LAKES, Ill. (July 4, 2016) — Master Chief Petty Officer of the Navy (MCPON) Mike Stevens speaks during an unveiling ceremony for the renaming of the Great Lakes Naval Museum to the National Museum of the American Sailor, at Great Lakes, Ill., July 4. The National Museum of the American Sailor name change signals a shift in vision from a regional focus to one that depicts the diverse history of Sailors who have served in the U.S. Navy. (U.S. Navy photo by Mass Communication Specialist 1st Class Eric Lockwood/Released)

“Dedicated to telling the story of anyone who has ever worn the Navy uniform, this building will do more than house history,” said Cox. “The National Museum of the American Sailor will stand as a place for Sailors, Navy families and proud Americans to learn more about the Navy that serves them by using the history and experiences of our Sailors as the basis for its exhibits.”

Cox and Stevens shared the news of the name change with attendees of the Naval Station Great Lakes July Fourth Celebration with a speech and video presentation Monday evening.

The National Museum of the American Sailor name change signals a shift in vision from a regional focus to one that depicts the diverse history of Sailors who have served in the U.S. Navy. The name change also reflects the interest of museum visitors, many of whom travel from across the country to attend the basic training graduations at the Navy’s Recruit Training Command.

“What may appear as a simple name change to some, for me, marks a recommitment to my shipmates that as a Navy, and as a Nation, we honor the service and sacrifice of all American Sailors,” said Stevens.

The National Museum of the American Sailor currently features exhibits on life in Navy boot camp, naval uniforms and traditions, the history of Naval Station Great Lakes, the role of diversity in the Navy and the role of women in the Navy.  Over the next two years, the museum will expand its exhibits to introduce visitors to the overall history and role of the U.S. Navy and the experiences of American Sailors in the past and today

“I am very excited for this ‘new’ museum, and I welcome you all to visit. Our nation’s history would not be the same if it were not for the millions of American Sailors who have served in the United States Navy,” said Cox.

The museum is located in Building 42 just outside the perimeter of Naval Station Great Lakes. Building 42, known as Hostess House, was built in 1942 and served as a visitors and reception center for almost one million American Sailors who came through Great Lakes during WWII.

The former Great Lakes Naval Museum was dedicated on October 26, 1996 in Building 158 and opened to the public on October 13, 1997. It became an official Navy Museum in Building 42 in 2009, joining the Naval History and Heritage Command museum enterprise.

The National Museum of the American Sailor is one of ten museums in the NHHC enterprise. Other museums include:

The Naval History and Heritage Command, located at the Washington Navy Yard, is responsible for the preservation, analysis and dissemination of U.S. naval history and heritage. It provides the knowledge foundation for the Navy by maintaining historically relevant resources and products that reflect the Navy's unique and enduring contributions through our nation's history and supports the fleet by assisting with and delivering professional research, analysis and interpretive services. NHHC is composed of many activities including the Navy Department Library, the Navy Operational Archives, the Navy art and artifact collections, underwater archeology, Navy histories, ten museums, USS Constitution repair facility and the historic ship Nautilus.