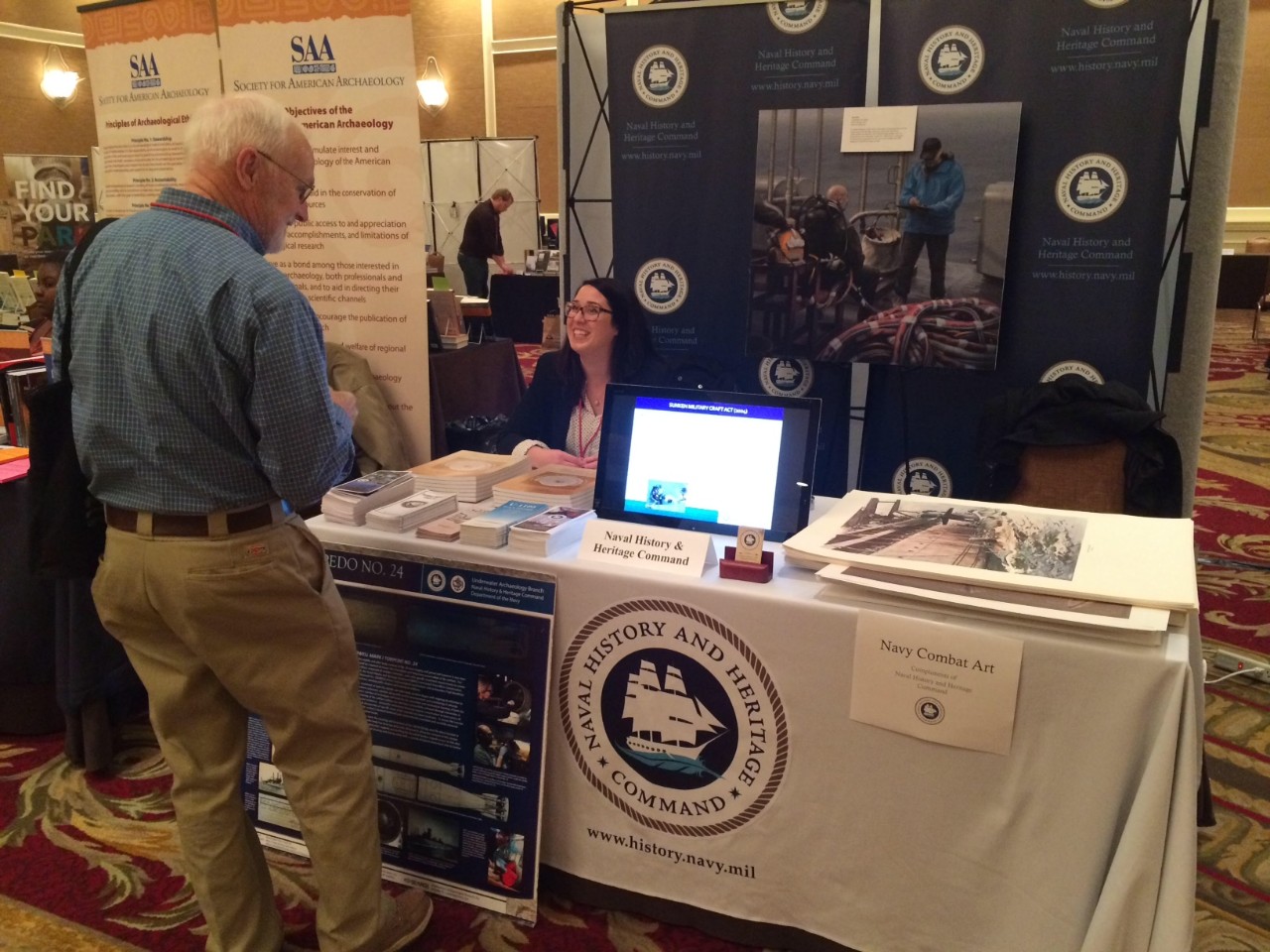 WASHINGTON, D.C. – Members of the Naval History and Heritage Command’s (NHHC) Underwater Archaeology Branch (UAB) joined archaeological professionals from around the world at the Annual Conference for Historical and Underwater Archaeology, Jan. 6-9, in Washington, where they presented papers to attendees on UAB’s missions and recent achievements.

According to the website of the Society for Historical Archaeology, which held the conference, the theme of the conference was to “focus on the preservation and interpretation of archaeological resources important to the larger historical narrative of all people.”

Tasked with preserving the U.S. Navy’s sunken and terrestrial military craft, including both ships and aircraft and their associated material culture, as well as conducting new and ongoing research projects and artifact conservation studies, UAB’s mission casts a global net.

Recovering and preserving timbers from a Revolutionary War-era schooner, to finishing conservation treatment on a century old torpedo, and posting to the federal register revised regulations to the Sunken Military Craft Act (SMCA) for permitting intrusive inquiry of sunken craft, UAB has accomplished a lot in the past year.

“The Navy has had a huge, rich impact on the narrative of this country,” said Blair Atcheson, one of UAB’s archaeologists. “Preserving these artifacts really enables us to tell its story well.”

The city of Harrisburg, Pa. formally presented the remains of Continental Navy schooner Royal Savage to the U.S. Navy during a press briefing at City Hall July 1. Mayor Eric Papenfuse presided over the event in which Naval History and Heritage Command (NHHC) Director Sam Cox accepted the artifacts on behalf of the Navy.

“This ship, and its artifacts are now going to be preserved and cherished for the public for generations to come as they should be,” Papenfuse said, adding “for the last 20 years, the artifacts have stayed in storage, out of public viewing, and we are pleased today to bring them to the light of day and to make sure they are being given the proper care.”

The UAB-led conservation of a rare 19th Century torpedo wrapped up last year as well. The middle- and after-body sections of Howell Mark I Torpedo No. 24 werer recovered from the bottom of the Pacific Ocean in 2013 off the coast of San Diego by a team of U.S. Navy dolphins.

Following recovery, the torpedo was transported to the UA Archaeology & Conservation Laboratory on the Washington Navy Yard.  After more than two years since its arrival at NHHC, and nearly 18 months of treatment, conservation of No. 24 is complete.

NHHC archaeological conservators worked with Paul Mardikian and Claudia Chemello, senior conservators with Terra Mare Conservation, LLC, contracted through SEARCH, Inc., for nearly 18 months to desalinate, clean and stabilize every part of No. 24.

Following multi-stakeholder coordination, revised regulations were published in the Federal Register Aug. 31, 2015. The regulations implement the Sunken Military Craft Act (SMCA) permitting requirements for conducting intrusive activity on sunken military craft under the jurisdiction of the Department of the Navy (DON). Publishing the regulations was among the branch’s most significant achievement in 2015.

“The regulations establish a permitting process for those interested in pursuing intrusive activities on DON sunken and terrestrial military craft for archaeological, historical, or educational purposes as specified in the act,” noted a press release from NHHC last year.

These craft, and their associated contents, represent a collection of non-renewable resources that often have historical value, serve as war graves, carry unexploded ordnance, and, if disturbed, could become environmental hazards due to oil or other materials they contain.

"Since we established the underwater archaeology branch in 1996, there has been increasing professionalism in doing things to the highest standard that we possibly can to be consistent with archaeological, curatorial, and historical preservation standards,” said Sam Cox, director of NHHC.

“Our intent is to maintain that and continue to get better as the discipline gets better,” Cox continued. “The Underwater Archaeology Branch is a critical force to the whole NHHC operation as it goes to the core of remembering and respecting and honoring the Sailors who have served our nation in the past."