Helping to connect the ceremony’s attendees to the day of infamy 75 years ago was a display featuring the bell, on loan from the Naval History and Heritage Command (NHHC), from the USS Vestal (AR 4), a former repair ship that was moored adjacent to USS Arizona (BB 39) when the Japanese attacked. 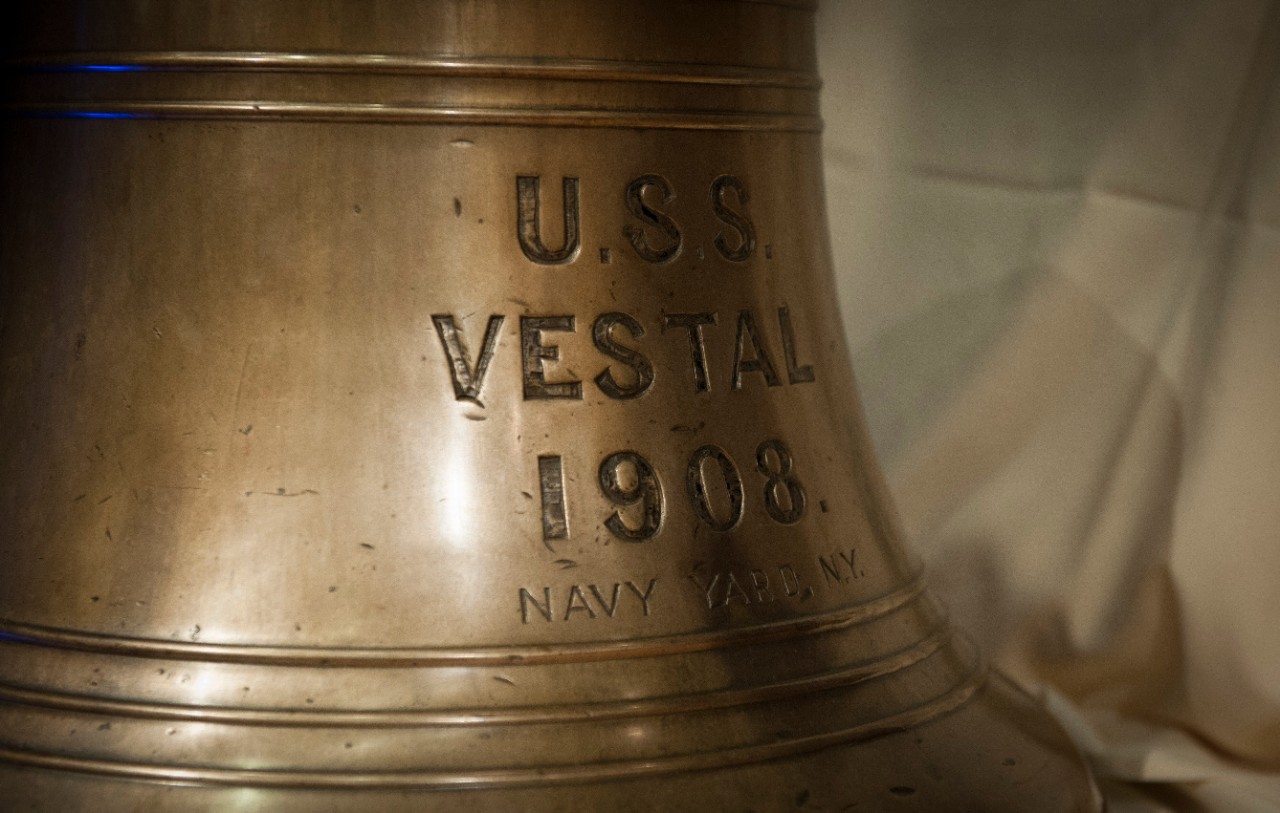 Description: 161206-N-ES994-001 WASHINGTON (Dec. 6, 2016) Naval History and heritage Command (NHHC) provided the bell from USS Vestal for display during a commemoration for the 75th Anniversary of the Pearl Harbor Attack, hosted by the Office of the Chief of Naval Operations (OPNAV) and held in the Pentagon’s auditorium. Vestal was among the ships damaged during the Pearl Harbor attack. (U.S. Navy photo by Chief Petty Officer Elliott Fabrizio/Released)

Vestal’s bell recently re-entered NHHC’s collection, but not in the best of shape. It needed some conservatory treatment before it could go on display.

“Tenacious accretions had accumulated on the bell's exterior, along with dust, dirt, and environmental pollution,” said David Krop, the conservation branch head at NHHC’s Collection Management Facility in Richmond. “Additionally, we detected lead paint on the bell's clapper assembly and old polish residue clinging to the bell's lettering.” 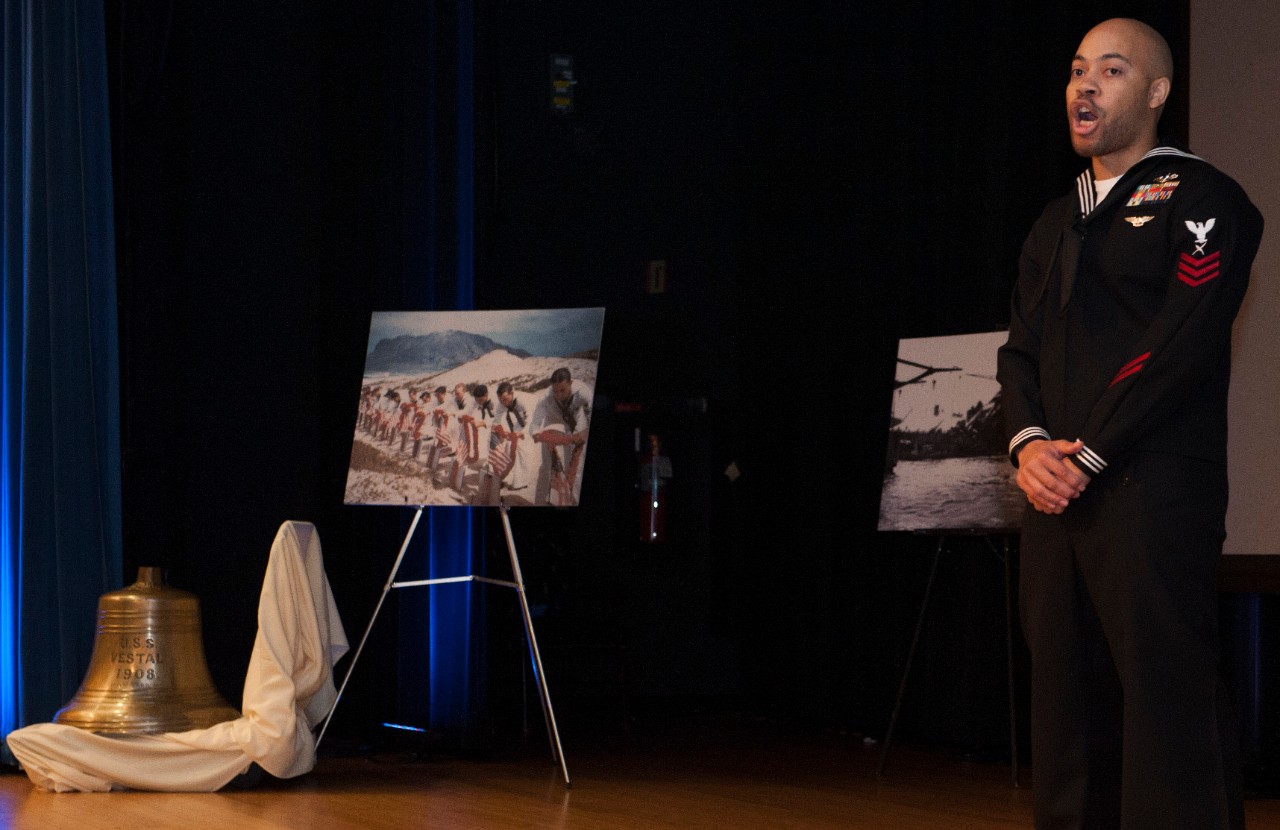 Description: 161206-N-ES994-008 WASHINGTON (Dec. 6, 2016) A Sailor describes the historical aftermath of the Pearl Harbor Attack during a remembrance ceremony for the 75th Anniversary of Pearl Harbor. The event was hosted by the Office of the Chief of Naval Operations (OPNAV) and was held in the Pentagon’s auditorium. Naval History and heritage Command (NHHC) provided the bell from USS Vestal for display during the commemoration. Vestal was among the ship’s damaged during the Pearl Harbor attack. (U.S. Navy photo by Chief Petty Officer Elliott Fabrizio/Released)

Using a variety of mechanical and chemical methods, Krop’s team was able to get the bell to a stable and presentable condition after about two weeks, in time for the ceremony.

“As we cleaned and conserved the bell,” said Karl Knauer, a conservator on Krop’s team, “its past reflected back to us through its marred surface. It was truly an honor to work on such an important touchstone to the Navy's history.”

Vestal’s is one of thousands of bells in NHHC’s collection, which are a tiny subset of the hundreds of thousands of artifacts in the collection. The holdings range from weapons, uniforms, flags, aircraft, ordnance, ship models, and almost any other type of artifact you could imagine having a Navy tie, even ties.

“The USS Vestal bell, like every other artifact in the headquarters artifact collection, has a unique story,” said Jeff Bowdoin, the deputy branch head for NHHC Curator Branch, “this one deeply embedded in one of the most significant events in American history. It’s our job to maintain these artifacts so future generations of Sailors can learn from, honor, and respect the history of the Navy.”

While Vestal may not be as famous as Arizona, her story is nonetheless compelling. Once the attack started, Vestal’s crew managed to man her guns almost immediately, everything from her 5-inch broadside battery to the .30-caliber Lewis machine guns. As the attack bore on, two bombs hit either side of her before she managed to get underway in order to evade the attack. Her port side was burst open, and the second bomb passed through a couple of different parts of the ship before leaving a five-foot hole in the bottom of it. Now, in addition to fighting the Japanese, she was fighting for her very life. But fight she did. Eventually, she managed to get underway and anchored off McGrew's Point. But a creeping list and rising draft caused the captain to ground the ship.

Although damaged herself, Vestal participated in some of the post-attack salvage operations, sending repair parties to the overturned hull of the battleship Oklahoma (BB 37) so that welders could cut into the ship and rescue men trapped there when she capsized after being struck by Japanese torpedoes. Vestal was ultimately decommissioned at the Puget Sound Naval Shipyard in Bremerton, Wash., on Aug. 14, 1946. 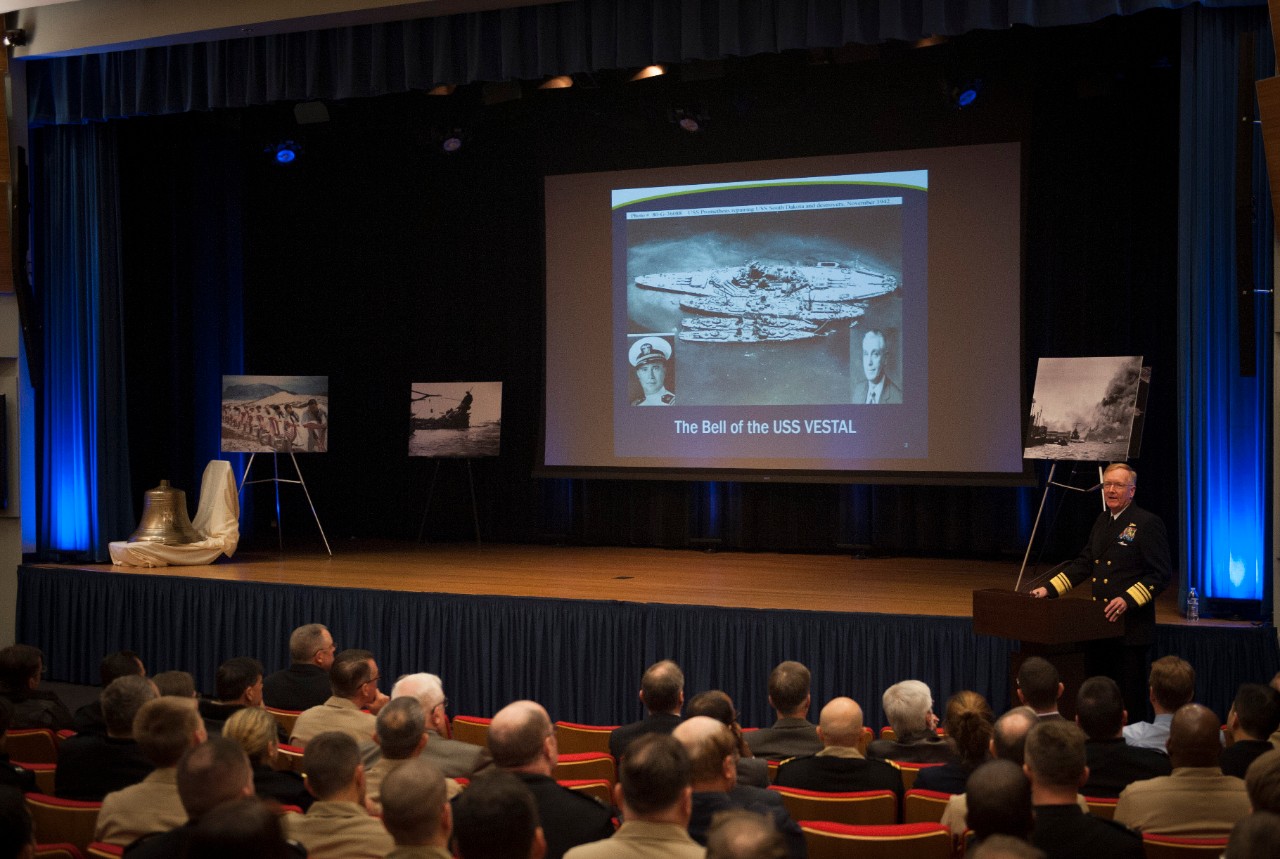 Description: 161206-N-ES994-009 WASHINGTON (Dec. 6, 2016) Vice Adm. James Foggo, Director, Navy Staff (DNS) speaks during a remembrance ceremony for the 75th Anniversary of the Pearl Harbor Attack. The event was hosted by the Office of the Chief of Naval Operations (OPNAV) and was held in the Pentagon’s auditorium. Naval History and heritage Command (NHHC) provided the bell from USS Vestal for display during the commemoration. Vestal was among the ship’s damaged during the Pearl Harbor attack. (U.S. Navy photo by Chief Petty Officer Elliott Fabrizio/Released)