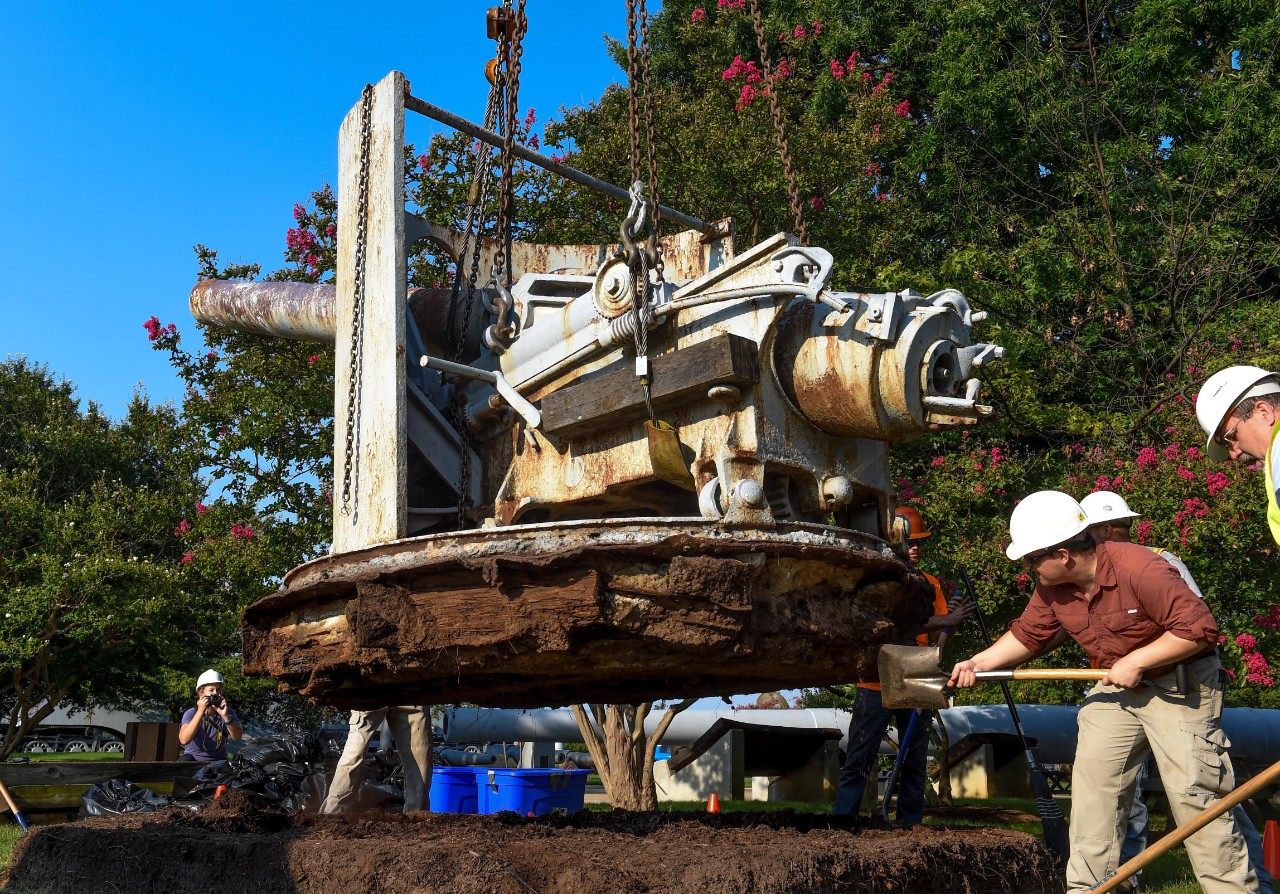 Description: 160806-N-TH437-095 WASHINGTON (Aug. 6, 2016) - After weathering the elements for more than 20 years, contractors clear away loose dirt around the base of the 6-inch, 30 caliber gun from the U.S. Navy battleship Maine, Aug.6, on the Washington Navy Yard. The Maine attained infamy when it was sunk in Havana Harbor, Cuba, being the catalyst of the Spanish-American War in 1898. The Naval History and Heritage Command contracted WLCC to perform extensive conservation work on the gun to preserve it for future generations. (U.S. Navy photo by Mass Communication Specialist 1st Class Eric Lockwood/Released)

Conservators from the Warren Lash Conservation Center (WLCC) in Charleston, South Carolina, worked with the Naval History and Heritage Command to remove the gun for conservation.

Planning to remove the gun from the Yard started in February of 2015. Environmental reviews, soil sampling, digging permits, training contractors in the specific work, safety reviews, reviewing hazardous material concerns and weight calculations were required to plan for the conservation of the gun.

“Its overall condition was very poor,” said Karen France, the head of NHHC curator branch. “It was obviously in need of conservation.”

The process started off by digging around the gun, seeing how far down it had settled, and how much concrete was present.  The team from WLCC confronted a foot thick layer of soil that they carefully removed to disclose the underlying concrete base.  The gun was craned onto a flatbed the morning of Aug. 6 for its long drive down to Charleston.

Now that it’s gone, the WLCC team will start arresting its condition issues. They’ll start off by removing existing paint, as much rust as is prudent, and inhibiting the extant corrosion. In short, they’ll be resuscitating it for future generations. 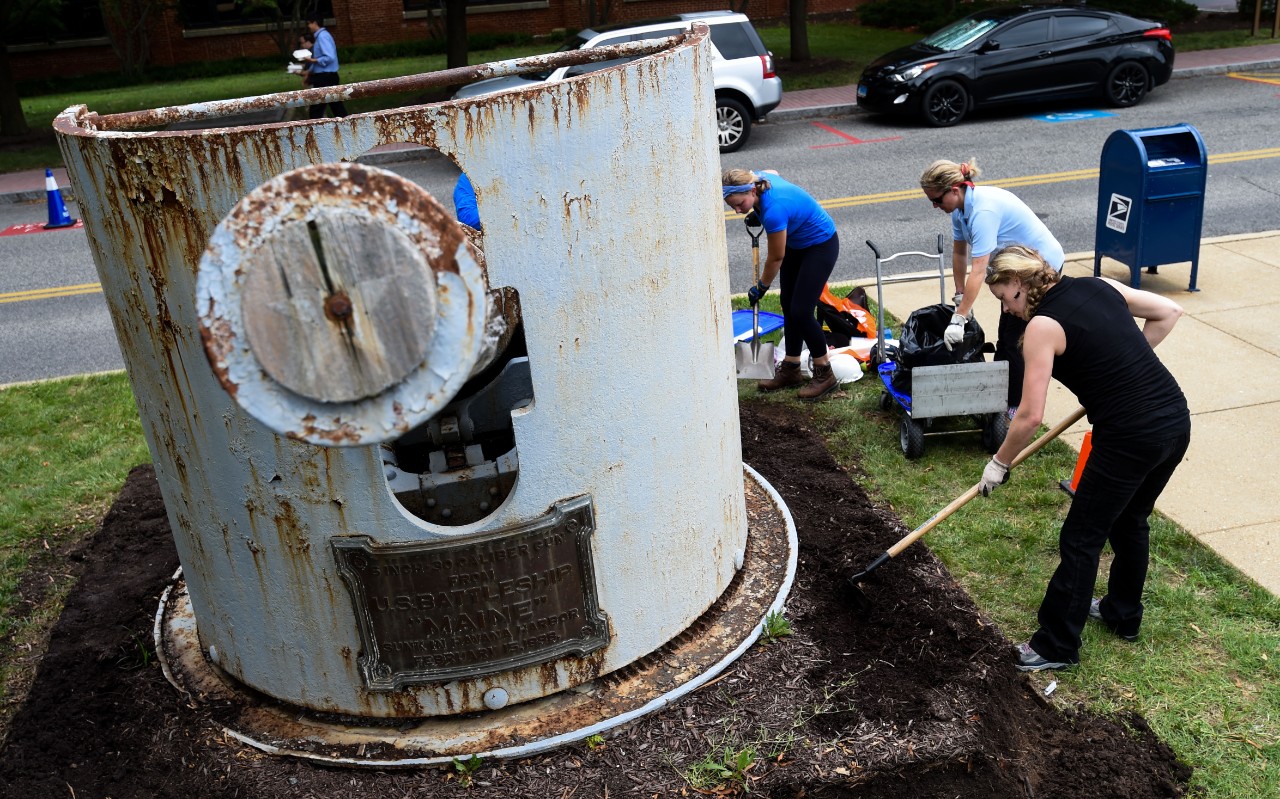 The whole process is expected to take anywhere from four to six months.

The Maine gun's story began in 1888 when the ship was commissioned, but the ship rose to prominence on the evening of Feb. 15, 1898 while docked in Havana harbor in Cuba. At 9:40 p.m. an explosion ripped through Maine’s hull, causing it to sink and killing 252 men immediately and 14 more, soon after.

After a month, a Navy board of inquiry came to the conclusion that the explosion was caused by a mine. Though the board fixed no blame, newspapers across the U.S. fed into public opinion that the Spanish government was to blame, causing an outcry of rage from the American people. "Remember the Maine!" would act as the catalyst that led the United States to declare war on Spain on April 21, 1898, starting the Spanish-American War. 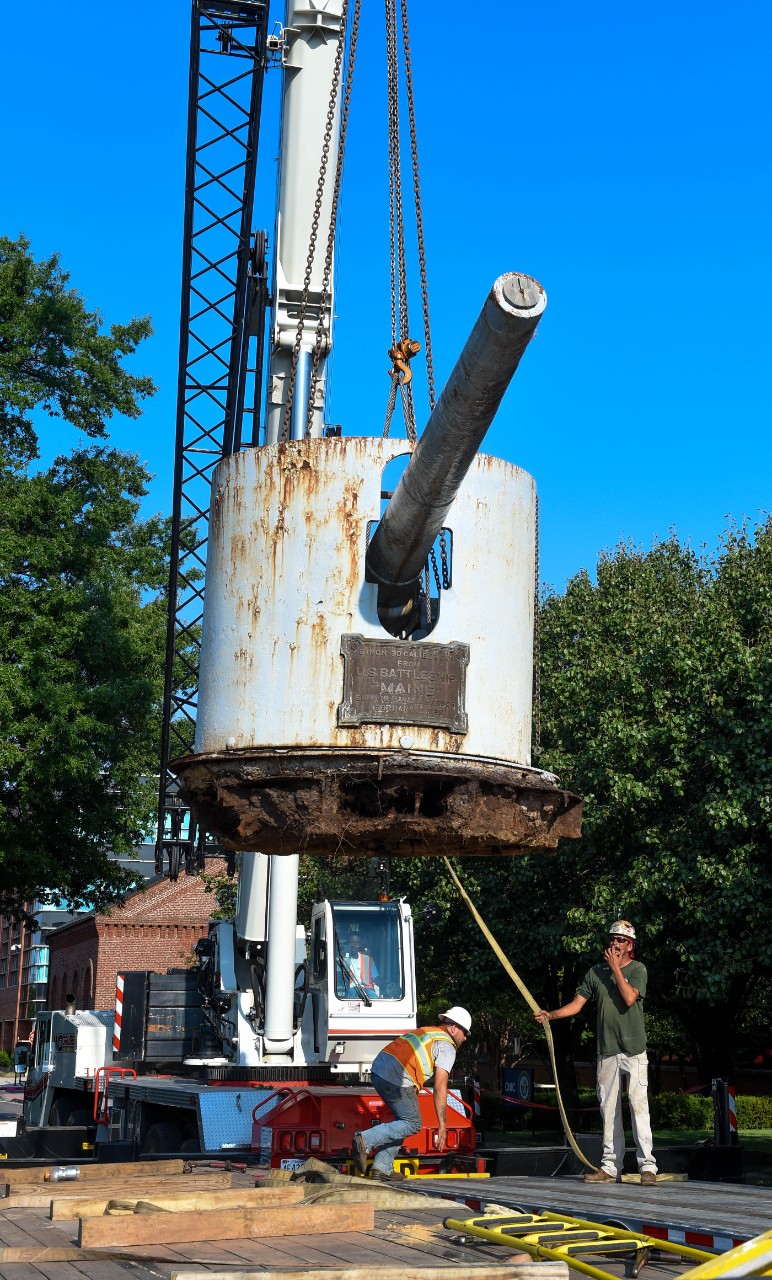