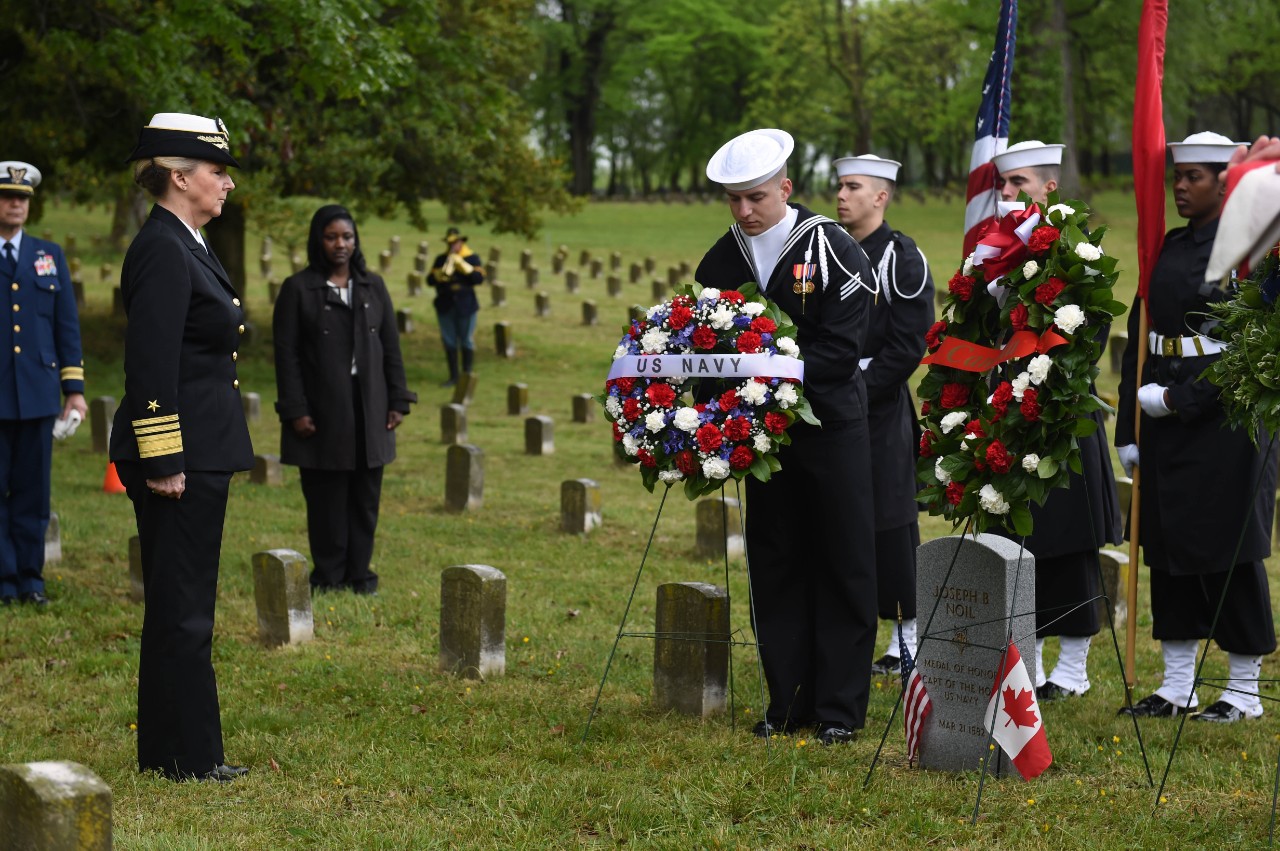 Description: 160429-N-TH437-144 WASHINGTON (April 29, 2016) Chief of Navy Reserve Vice Adm. Robin Braun observes the wreath presentation by Sailors assigned to U.S. Navy Ceremonial Guard at the headstone ceremony for Medal of Honor recipient Joseph B. Noil at St. Elizabeths Hospital Cemetery April 28. Noil received the Medal of Honor while serving on USS Powhatan, but his headstone did not recognize his award due to a misprint on his death certificate. U.S. Navy photo by Mass Communication Specialist 2nd Class Eric Lockwood/Released.

Captain-of-the-Hold Joseph Benjamin Noil received the Medal of Honor for bravery in 1872 for actions while serving in the Navy. According to his citation, “Serving on board the U.S.S. Powhatan at Norfolk, 26 December 1872, Noil saved Boatswain J. C. Walton from drowning.”

But until today you wouldn’t know that from his tombstone. In fact, aside from his name, there is no mention of his deed—and even his name is spelled wrong. Likely because of a clerical error on his death certificate, the name on his headstone was originally engraved as Noel.

Originally born in Liverpool, Nova Scotia, Canada, Noil moved to America and enlisted in the Navy on Oct. 7, 1864, in New York. He served his adopted country until March 18, 1867, whereupon he got out, but he re-enlisted on Dec. 18, 1871. It was during this enlistment that he earned the medal. 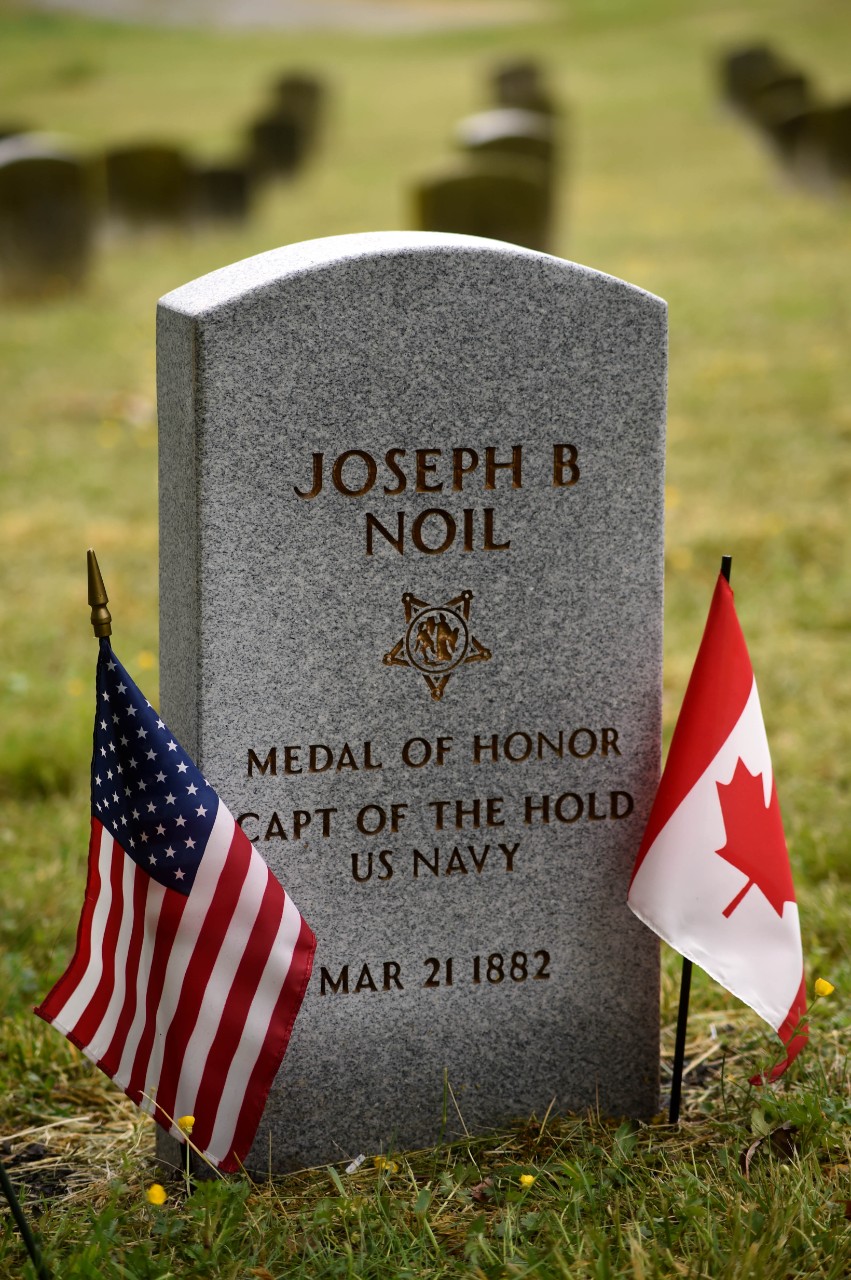 Caption:
Description: 160429-N-TH437-182 WASHINGTON (April 29, 2016) American and Canadian flags are placed at the newly erected headstone of Medal of Honor recipient Joseph B. Noil during a ceremony at St. Elizabeths Hospital Cemetery April 28. Noil received the Medal of Honor while serving on USS Powhatan, but his headstone did not recognize his award due to a misprint on his death certificate. U.S. Navy photo by Mass Communication Specialist 2nd Class Eric Lockwood/Released.

Investigations carried out by Galyle Alvarez, Don Morfe and Bart Armstrong of Medal of Honor Historical Society of the United States helped correct the 130-year-old oversight

Alvarez and Armstrong referenced the Powhatan deck log and found no mention of Noil’s heroism, but the day after Walton’s rescue, Capt. Peirce Crosby, commander of the Powhatan, acknowledged the bravery in a memo that was published in a Jan. 11, 1873, Army and Navy Journal.  The memo states:

“Sir: I have the honor to bring to the notice of the Department the gallant conduct of Joseph B. Noil, seaman, (negro,) one of the crew of this vessel. The circumstances are as follows: On yesterday morning the boatswain, I .C.[sic] Walton, fell overboard from the forecastle, and was saved from drowning by Joseph B. Noil, seaman, who was below on the berth deck at the time of the accident, and hearing the cry ‘man overboard,’ ran on deck, took the end of a rope, went overboard, under the bow, and caught Mr. Walton, who was then in the water, and held him until he was hauled into the boat sent to his rescue. The weather was bitter cold, and had been sleeting, and it was blowing a gale from the northwest at the time. Mr. Walton, when brought on board, was almost insensible, and would have perished but for the noble conduct of Noil, as he was sinking at the time he was rescued.”

Noil passed away on March 21, 1882, at St. Elizabeths.  Records indicated that a tombstone was ordered, but due to a typo on his death certificate, the error was later repeated on his headstone.

“I believe a thread runs through every family, and if we follow that thread it will explain where we come from, and show us where we’re able to go,” said Bernadette Maybelle Parks Ricks, Noil’s great-great granddaughter. “As someone said to me recently, they didn’t know he had a family. But now he has a vibrant gang of descendants. We love you. We thank you. And now you can rest in peace.”

Braun in particular was struck by the selfless regard Noil displayed for his shipmate, a word she holds in extremely high esteem.

“Your shipmate is not simply someone who happens to serve with you,” Braun said. “He or she is someone who you know that you can trust and count on to stand by you in good times and bad and who will forever have your back.

“So, by […] rededicating his headstone, we are not only correcting a wrong, we are highlighting and reinforcing the eternal bond which exists between Shipmates—past, present, and those yet to come. And, although I—or any of us—did not know him, we are his Shipmates—and, 134 years after he passed, we have his back.”

The Naval History and Heritage Command, located at the Washington Navy Yard, is responsible for the preservation, analysis, and dissemination of U.S. naval history and heritage. It provides the knowledge foundation for the Navy by maintaining historically relevant resources and products that reflect the Navy's unique and enduring contributions through our nation's history, and supports the fleet by assisting with and delivering professional research, analysis, and interpretive services. NHHC is composed of many activities including the Navy Department Library, the Navy Operational Archives, the Navy art and artifact collections, underwater archeology, Navy histories, nine museums, USS Constitution repair facility and the 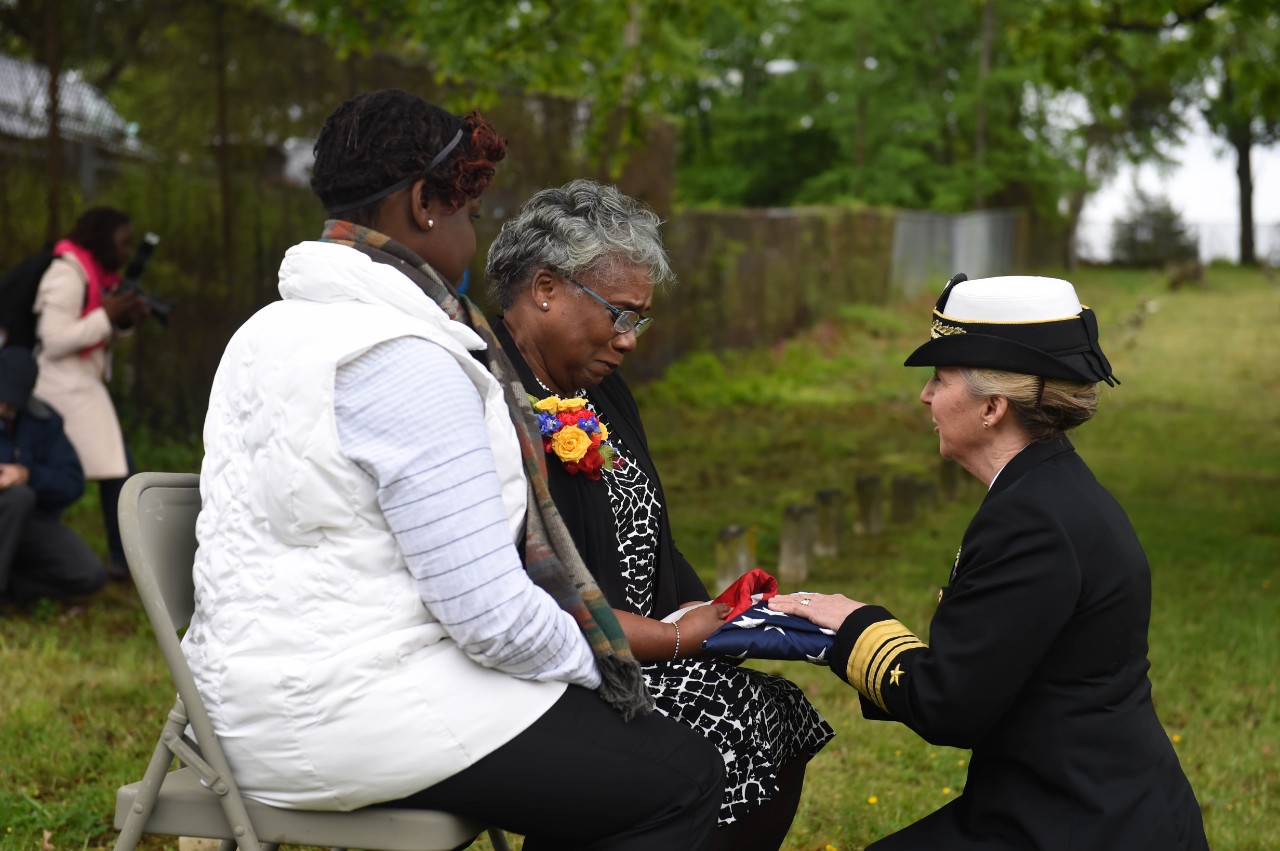