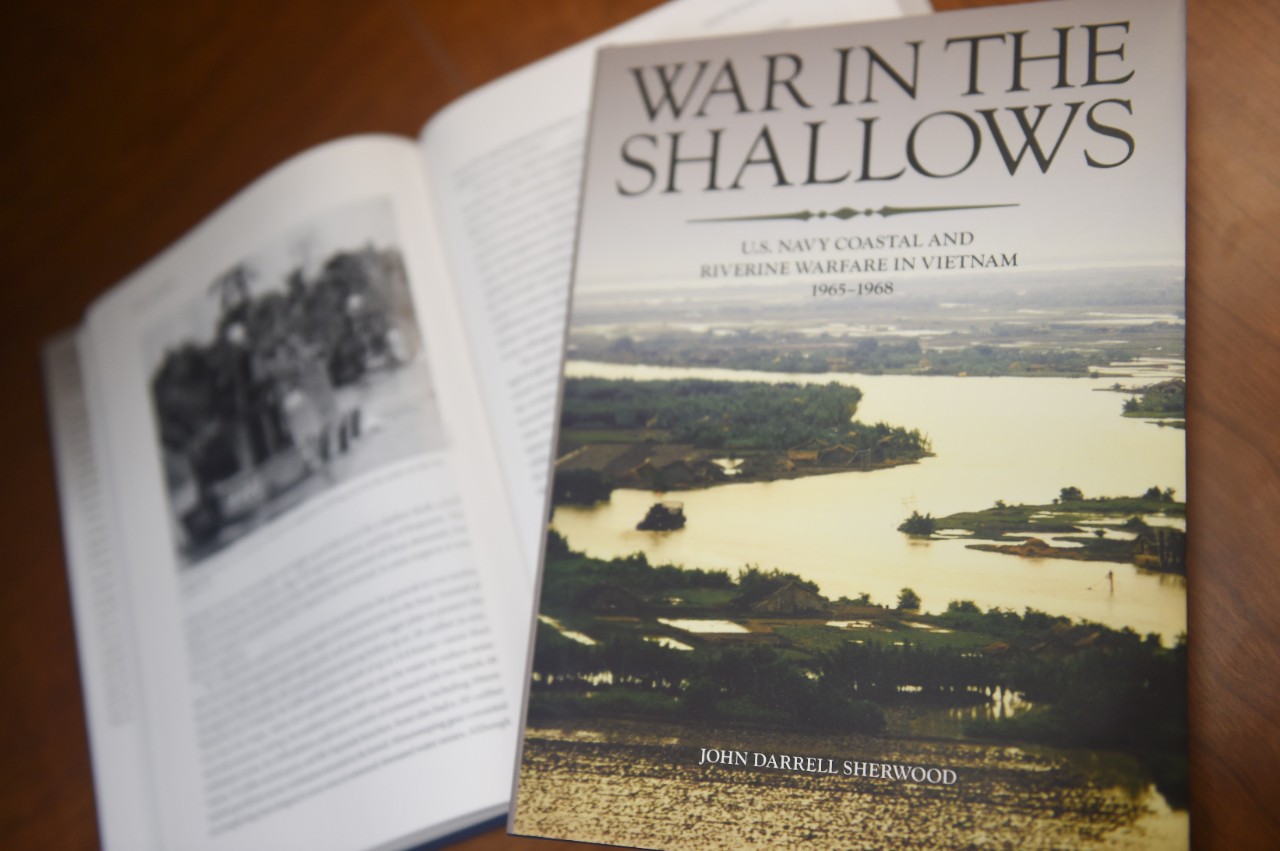 Dr. John Darrell Sherwood, a historian with NHHC, spoke about his new book “War in the Shallows: U.S. Navy Coastal and Riverine Warfare in Vietnam, 1965-1968,” published by the command in October.

“War in the Shallows” details the operations of three inshore task forces: the Coastal Surveillance Force (TF 115), the River Patrol Force (TF 116), and River Assault Force (TF 117), which made up the naval component of the Mobile Riverine Force (MRF). It also examines the basing, logistics, tactics, rules of engagement, and technology of the Navy's inshore task forces in Vietnam.  Perhaps the most enlightening aspect of the book is the use of interviews with Vietnam veterans which illustrate the social history of the men who made up the “brown water” Navy. They provide a glimpse of the humanity behind the hardware rarely seen in message traffic or action reports.

“It’s superb scholarship, and a great story,” said Samuel Cox, director of NHHC.  “It covers the grand strategy, but it also gets down to the deckplates, and without that perspective, you really can’t appreciate what these men went through.”

At the height of the U.S. Navy’s involvement in the Vietnam War, the Navy’s coastal and riverine forces included more than 30,000 Sailors and over 350 patrol vessels ranging in size from riverboats to destroyers.  For the Navy, Vietnam required the learning of difficult lessons.  It represented the first time since the Civil War that large numbers of Sailors engaged in riverine warfare in small boats—a combat experience more akin to that of an infantry soldier than a Sailor on a large oceangoing surface combatant.

With respect to the wider war, the riverine and coastal forces executed one of the most successful naval blockades in modern naval history, known collectively as Operation Market Time (OMT), Sherwood said.  In the process, they prevented the North Vietnamese from infiltrating supplies to the Viet Cong in South Vietnam by sea in steel hulled freighters and other larger ocean-going vessels. Overall, OMT reduced North Vietnamese resupply by sea of its forces in the South by 90 percent. During the Tet Offensive in 1968, the MRF’s ability to project a massive force nearly anywhere in the delta proved instrumental in recapturing cities and inflicting a severe blow to the enemy in the process.  As General Westmoreland later commented, the MRF saved the delta during Tet.

Vietnam was the bloodiest war in recent naval history and ‘War in the Shallows’ strives, above all else, to provide insight into the men who fought it.

Some of Sherwood’s most valuable resources in writing this account were oral histories.  NHHC had some on file already from Vietnam riverine veterans, but he also conducted interviews with many more people who were there.

“The oral history really puts the story back into history,” he said. “In this war, junior officers and enlisted petty officers commanded the major combatants—small boats.  I strived to tell the story of how they played a critical role in combat decision-making during the war.”

If you missed this discussion, Sherwood will speak again about the book at the Pentagon Conference Center (room B-6) on Jan. 21, 2016, at 12 p.m. as part of the Department of Defense History Speakers series.  For more information on this event, contact Tom Christianson at mailto:Thomas.e.christianson.civ@mail.mil or visit the website http://history.defense.gov.

The full text ‘War in the Shallows’ can be found online in PDF format, http://www.history.navy.mil/research/publications/publications-by-subject/war-in-the-shallows.html.

It, along with many other NHHC publications, can also be purchased in hardcover at the Government Publishing Office Bookstore, http://bookstore.gpo.gov/. Publications are also held in hardcover format at GPO Repository libraries and a select number of Armed Forces libraries and research centers. Items not available at your local library can generally be obtained using interlibrary loan. Researchers are encouraged to consult the staff of their local library if they are unable to locate these publications.