United States Naval Aviation 1910–2010  by Mark L. Evans and Roy A. Grossnick (2015, ISBN 978-0-945274-87-2, hardback, two volumes) is the Naval History and Heritage Command’s fourth update to the original history which was initiated in 1960.  That first issue celebrated the first 50 years of United States naval aviation and this two-volume set commemorates the centenary. 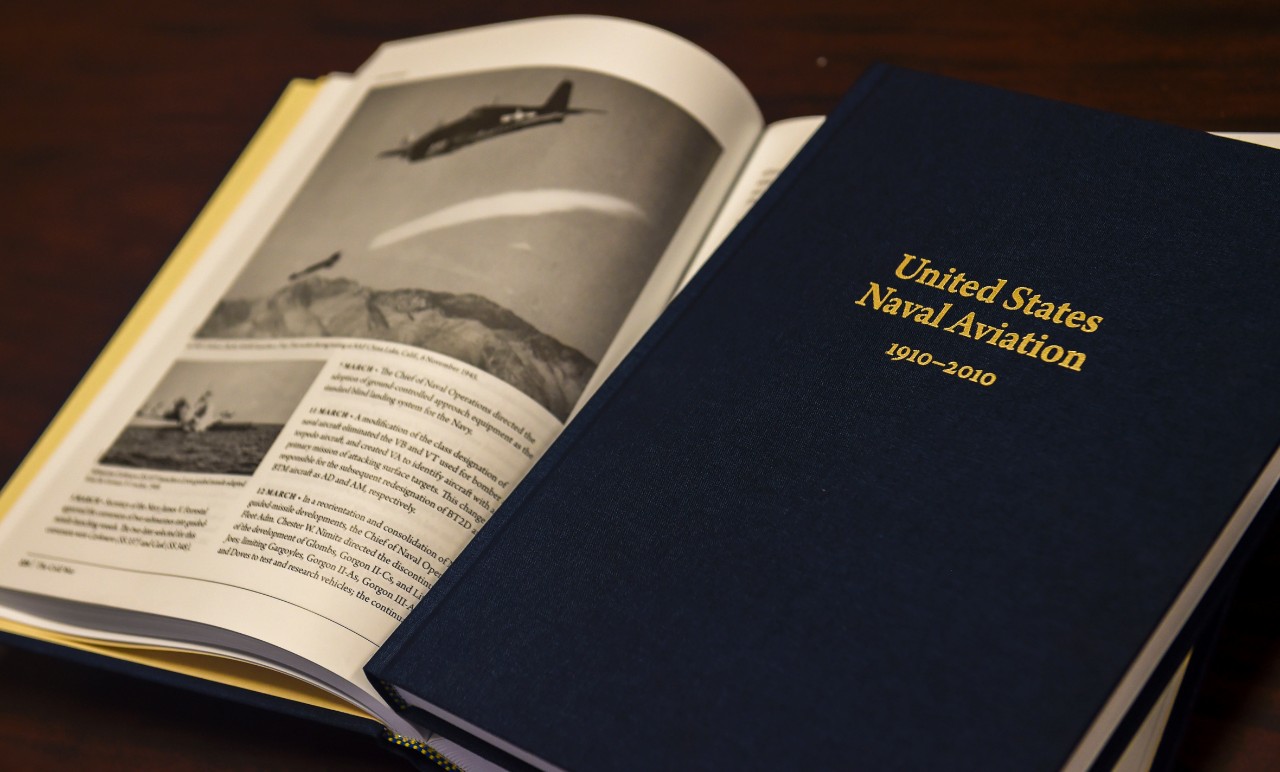 Description: 151104-N-TH437-005 -- WASHINGTON, D.C. (Aug. 27, 2015) The Navy released a two-volume history of naval aviation. "United States Naval Aviation 1910-2010" is the fourth update to the history which originally initiated in 1960. It divides the history of U.S. naval aviation into two volumes: chronology and statistics. New and expanded research make these the definitive volumes on U.S. naval aviation's first century. These and other free Naval History and Heritage Command publications can be found at: http://www.history.navy.mil/research/publications/publications-by-subject.html. (U.S. Navy photo by Mass Communication Specialist 2nd Class Eric Lockwood/Released)

Previous editions have proved an invaluable first-stop research tool to aviation, naval, and military historians. This latest update breaks U.S. naval aviation history into two volumes: Chronology and Statistics. Both have greatly increased content over the previous version beyond simply including years not previously covered. New and expanded research makes these the definitive volumes on U.S. naval aviation’s first century.

This and other free Naval History and Heritage Command publications can be found at: http://www.history.navy.mil/research/publications/publications-by-subject.html.

Hard bound copies of the book are available from the Government Publishing Office Website at: https://bookstore.gpo.gov/products/sku/008-046-00297-5

Mark L. Evans is a Navy veteran and historian who researches and writes the histories of the Dictionary of American Naval Fighting Ships for the Naval History and Heritage Command. His professional writing also includes several books: The Most Illustrious Name The USS Enterprise (CVN-65); Volume I of United States Naval Aviation 1910–2010 (with Roy A. Grossnick); and Great World War II Battles in the Arctic; as well as numerous papers and articles. He resides in Virginia.

Roy A. Grossnick, former head of the Naval Aviation History Branch, Naval History and Heritage Command, is a Navy veteran and holds degrees from the University of Wisconsin, Stevens Point and Madison. He is a recipient of the Arthur W. Radford Award for Excellence in Naval Aviation History and Literature for creating the Dictionary of American Naval Aviation Squadrons series and authoring the first volume in 1995. Mr. Grossnick worked on the third edition of United States Naval Aviation, 1910–1980, and was the guiding author for the 1910–1995 update. After his retirement in 2008, he continued to work for the command as a historian/archivist consultant and is responsible for researching and updating Volume II, the statistics for United States Naval Aviation, 1910–2010.