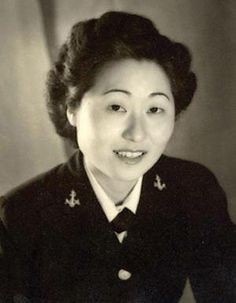 Caption: Susan Ahn Cuddy was the first Asian American female to serve in the U.S. Navy after joining the Women Accepted for Volunteer Emergency Service program during World War II.

Cuddy, who was born in Los Angeles in 1915, was the first Asian American female to serve in the U.S. Navy when she joined the Women Accepted for Volunteer Emergency Service (WAVES) program during World War II.

“The presentation will coincide with the museum’s observation of Asian & Pacific Islander Heritage Month,” said Hanako Wakatsuki, museum education specialist and public programs coordinator.  “We are excited to celebrate the rich culture and contributions Asian Americans have made in our nation’s history with Ms. Cuddy, who was not only a pioneer for Asian Americans, but for women as well.”

As a 1940 graduate of San Diego State University, Cuddy joined the WAVES in 1942; she was also the first female gunnery officer achieving the rank of lieutenant. Upon exiting the service in 1947, she went to work for the National Security Agency in Washington, D.C. before moving back to Los Angeles in 1959.

Cuddy will be joined by her son, Philip Cuddy, who will offer a visual presentation of his mother’s service. Dr. Lara Godbille, museum director, explained the importance of offering non-Seabee and Civil Engineer Corps (CEC) presentation topics at the museum.

“Even though the museum’s mission is to tell the Seabee and CEC story, it is important to honor our national naval heritage,” said Godbille. “We are happy to present an opportunity for our patrons to engage with a member of the surrounding community who has become such a distinguished aspect of naval history.”

All media inquiries about Susan Cuddy prior to the event are being coordinated through her son, Philip, via email: info@susanahncuddy.com

More information, including a full biography about Susan Cuddy can be found on her website: www.susanahncuddy.com

Hi-resolution images of some of the museum’s archived imagery can be seen on our Flickr page: https://www.flickr.com/photos/usnavyseabeemuseum