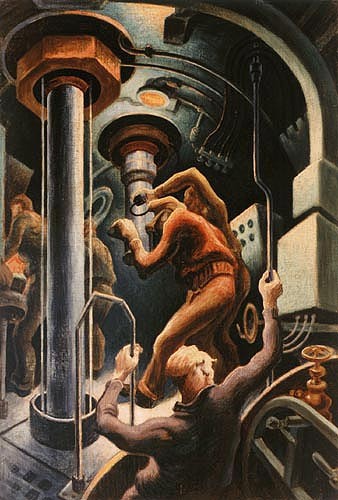 Caption: Sweater-clad U.S. Navy submarine men blend into the gloomy background of their ship, illuminated in eerie fashion by a light in the overhead, as they go about their duties far below the surface while on a patrol mission. An officer keeps his eyes glued to the periscope as he scans the horizon for the outline of an enemy ship. (Courtesy of Naval War College Museum)

People are re-discovering the art of Thomas Hart Benton (1889-1975) with two new exhibitions of his work.

The Metropolitan Museum of Art in New York City has on exhibit the recently acquired mural America and this will run through April.  For more information click here.

In support of this exhibit, the December 2014 edition of Smithsonian magazine carried an article on Benton’s work on the mural.

But, closer to home, the Naval War College Museum is also exhibiting twenty-two pieces of his art that are on loan from the Navy Art Collection administered by the Naval History and Heritage Command at the Navy Yard in Washington, D.C.  This exhibit is entitled The Naval Art of Thomas Hart Benton and will run through the end of June.

Thomas Hart Benton was born in Neosho, Missouri, to a family steeped in the tradition of law and politics.  With an uncle who was a powerful senator and a father who was a congressman, it was assumed that he would follow in their footsteps and enter the profession of politics.  Benton wanted nothing of it.  He wanted to be an artist and ended up dropping out of high school and working as a cartoonist for a local, Joplin newspaper.

His mother, on the other hand, supported her son.  She pushed him to enroll in the School of the Art Institute of Chicago where he was to study illustration and cartooning.  It was there that he became interested in painting and he rushed off at the age of 19 to Paris to learn his new obsession.

But, life got in the way as Benton pursued a bohemian lifestyle while dabbling in various artistic styles which he tries on and then just as rapidly discards.  After three years in Paris, he moved to New York City and continued to flirt with varying styles and worked in the emerging film industry painting portraits.   Aimless and unsatisfying, Benton and his art were adrift.

During World War I, Benton found work as a camoufleur at Norfolk, Virginia.  Here, away from the “esthetic virus” common to a more cosmopolitan environment, Benton found his art in the people from the hinterlands of America.  He finds his art in what would become known as American Regionalism and, along with Grant Wood and John Steuart Curry, would become one of the leaders of this movement.  Even after returning to New York City, he would continue traveling the Midwest and South drawing inspiration from the farms, coal mines, and struggles of the unaffected, average citizen.

Benton’s work has often been dismissed as too cartoonish.  People from the liberal side to the conservative side of politics could find something to deride him and his work.  He had his greatest popularity during the 1930s and 1940s and it was the rise of Abstract Expressionism which pushed him to the side and his importance diminished. Refusing to change his style, he damned his detractors; he was a man of the people and his paintings would forever reflect their every-day lives with all of its misery, excess, and energy.  There would be no compromise.  This was the theme of his American Regionalism style.

To the end of his life, Benton was a man of many contradictions and always sensitive to any personal affront.  He loved the limelight and his traveling around the country gave him the opportunity to swap stories with his listeners.  As his star faded, he just withdrew to a smaller stage.  He would die at the age of 85 in Kansas City, Missouri.  Since his death, there was a brief revival of interest in his art when Ken Burns did a documentary in the late 1980s.  Hopefully with these two exhibits, Thomas Hart Benton will again achieve the recognition he deserves.

For those wishing to visit the Naval War College Museum and are not in possession of a United States Uniform Services identification card, you must go through a vetting process that can take up to five days for U.S. citizens.  Non-U.S. citizens will experience a two-week delay as the vetting process is more extensive.  For more information about the museum or to make reservations, please contact the museum at 401-841-2101/4052 or go to www.usnwc.edu/museum or www.facebook.com/navalwarcollegemuseum.