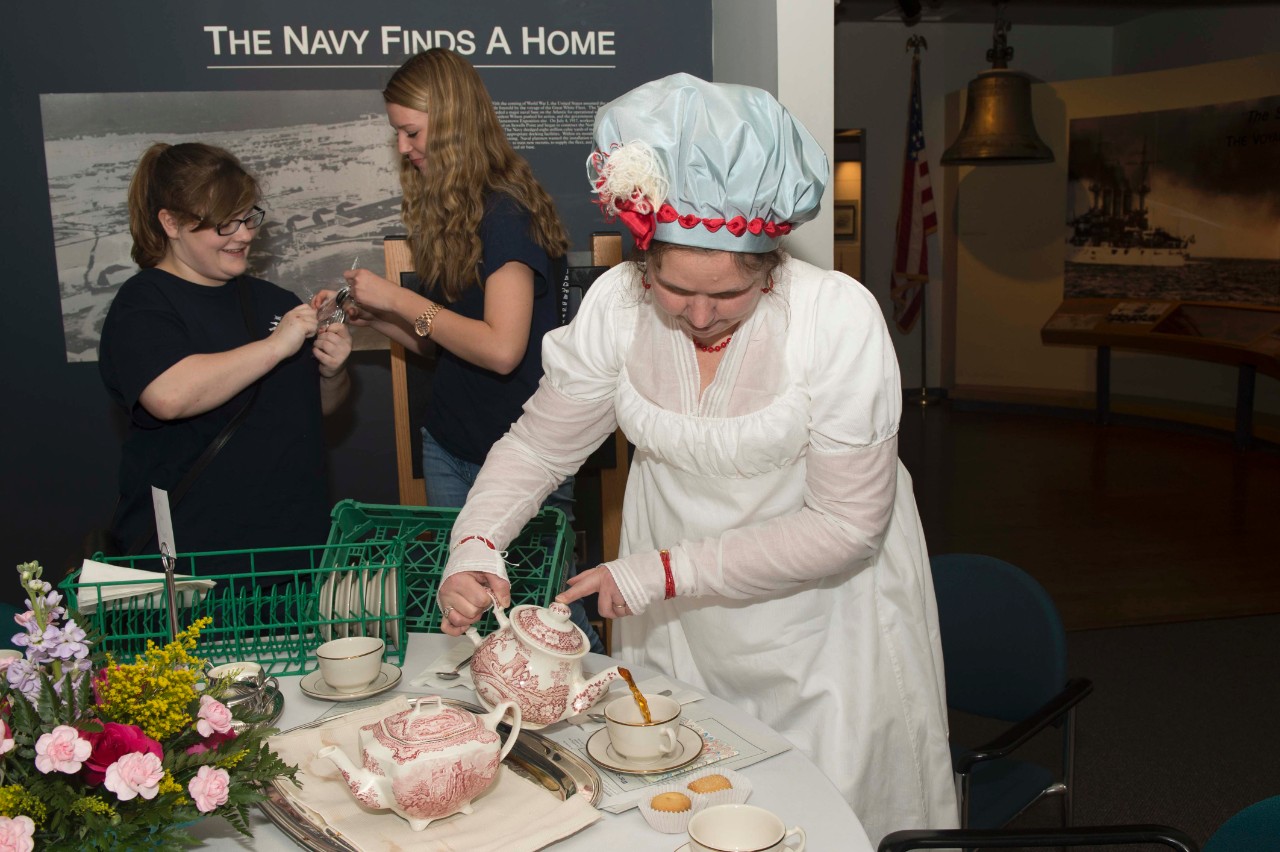 NORFOLK (NNS) -- Visitors got a taste, literally, of the culture and society of 1815 during a tea party at the Hampton Roads Naval Museum Feb. 22.

The museum, in conjunction with the United States Daughters of 1812, the Norfolk Historical Society, and the Regency Society of Virginia, hosted "Make Tea not War: A Tea Commemorating the Treaty of Ghent", commemorating the end of the War of 1812.

Attendees were transported back in time to 1815 Norfolk through conversations with costumed re-enactors while music played on the Irish harp.

"It (the tea party) takes something like the Treaty of Ghent, that ended the War of 1812 some two hundred years ago, and brings it to life," said Lee Duckworth, HRNM's director of education. "And having re-enactors here to talk about what culture was like, what society was like, what it was like on the home-front, what some of the Sailors went through in that time, just brings it all together."

Re-enactor Stacy Weissner, a founder of the Regency Society of Virginia, said she loves feeling as though she's living a piece of history through events like the tea party. 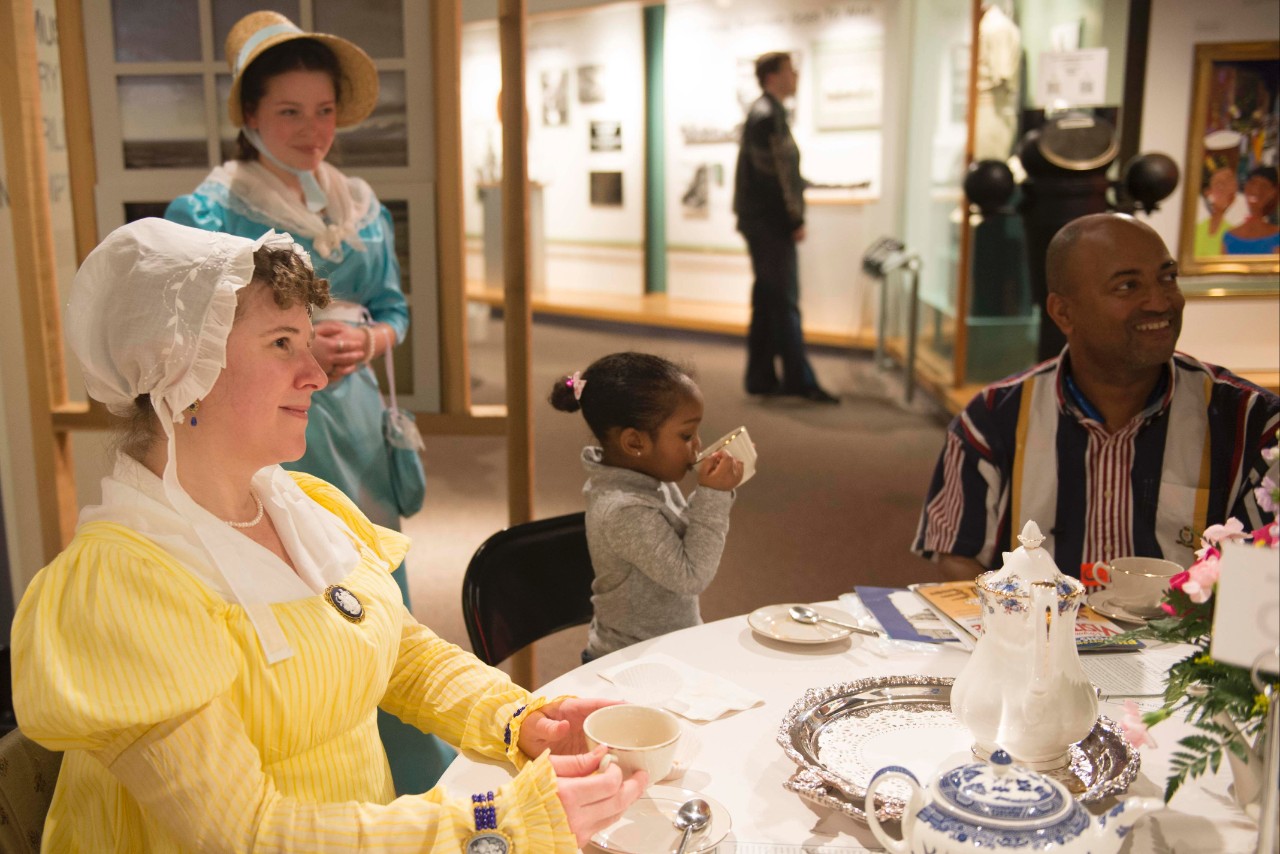 Many of the Regency Society members hand-sewed elements of their costumes for authenticity as well as researched talking points for the tea tables through old letters, newspapers, and books about the time period.

The Treaty of Ghent, signed in Belgium, and ratified by the U.S. Senate Feb. 18, 1815, formally ended the War of 1812 between the United States of America and the United Kingdom of Great Britain and Ireland. The war served to establish the United States as a lasting world power, causing some historians to view it as the "Second War for American Independence."

"The lasting impact of that war is in many ways greater than the actual war, for as you've also heard, many of the symbols and successes of America, and especially the United States Navy, were born in that conflict," said Ray Mabus, secretary of the Navy, during his remarks at the bicentennial event in 2012 commemorating the anniversary of the war.

Some of those symbols, including the famous saying, "Don't give up the ship," and the creation of the "Star-Spangled Banner," highlight the way the war embedded itself into U.S. history.

"I think it's important not only for Sailors in the Navy, but for the local populace here in the Hampton Roads area to understand what took place, what it was like to live during the war of 1812," said Duckworth.

The event also served as an opportunity for some members of the international community to learn about the region's history through the volunteer efforts of the North Atlantic Treaty Organization (NATO) youth ambassadors.

The youth ambassadors, dependent children of officers stationed at NATO Headquarters in Norfolk, volunteer at various activities and organizations to fulfill community service requirements for high school diplomas and scholarships in the United States.

"Because they are military, they have traveled around; they have a little more poise," said Trish Carrier, executive director of the Norfolk NATO Festival. "But they're learning about other cultures, not just American, and they're true ambassadors because they're learning a lot about us, but then people learn about them in return."

Students from Germany, the United Kingdom, Italy, Spain, France, Greece and Canada participated in the HRNM event by serving the tea and cookies to the guests.

"It's nice to just sit down and serve tea and just talk with people. I like that," said Noor Assa, 15, originally from the Netherlands. "Usually, we're behind the scenes, with no people around; now, we're really doing stuff where the people see us. I want to know what people think, their opinions about things."

For the participants, organizers, and volunteers, the tea party provided a unique chance to bring history to life in a more interactive and digestible format, while highlighting Hampton Roads as a crux for military activity.

"People have always been affected by what goes on with the Navy and what goes on with the port here, and in that, we aren't so far removed from that," said Weissner. "We're very tied to the water and what happens there, and it's comforting in a way to know that this area has always thrived on that, it's nice to have an area that is saturated in that Naval history and proud of it."

The museum introduces visitors to more than 239 years of U.S. naval history in the Hampton Roads area. One of 10 officially operated U.S. Navy museums reporting to the Naval History and Heritage Command in Washington, D.C., the HRNM houses a rich collection of authentic uniforms, weaponry, underwater artifacts, detailed ship models and artwork. For more information on the museum and their upcoming events, visit www.hrnm.navy.mil. 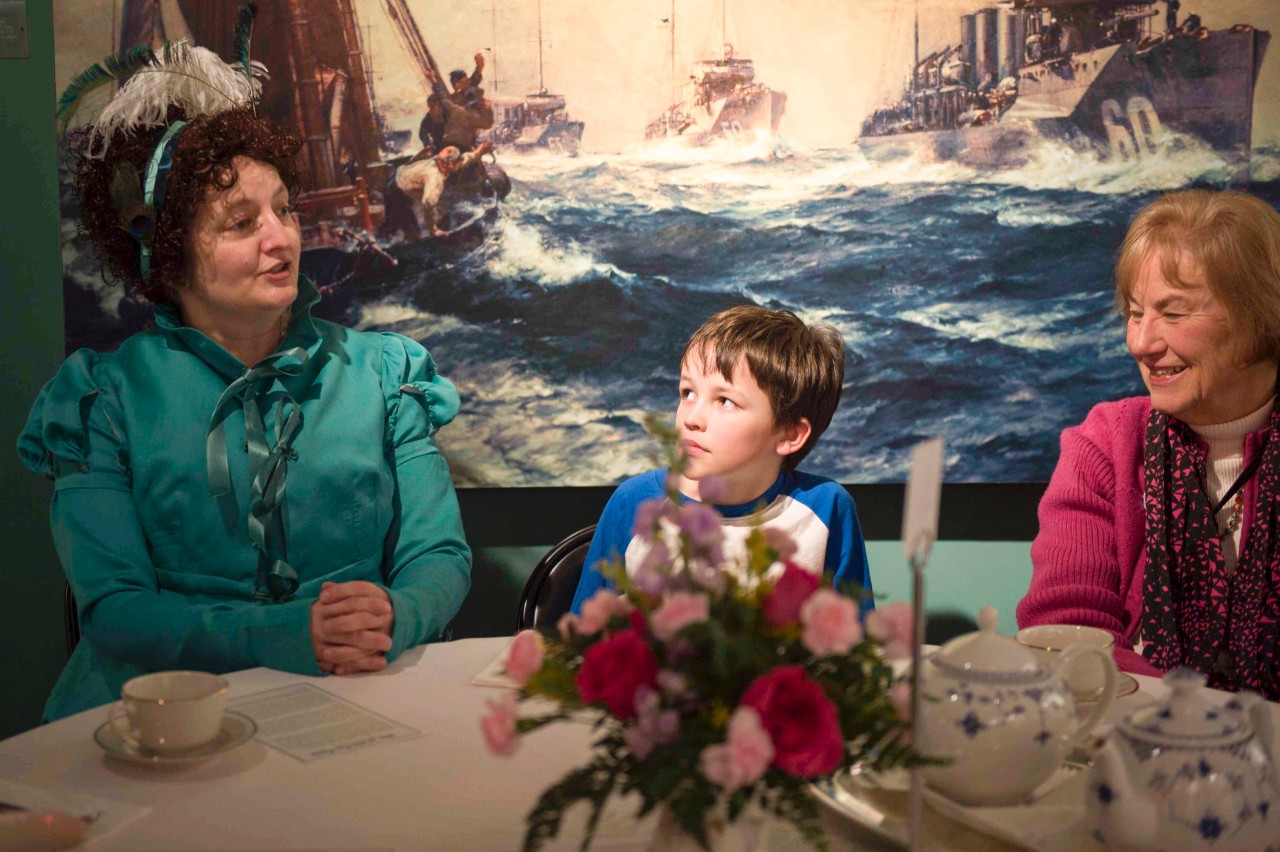