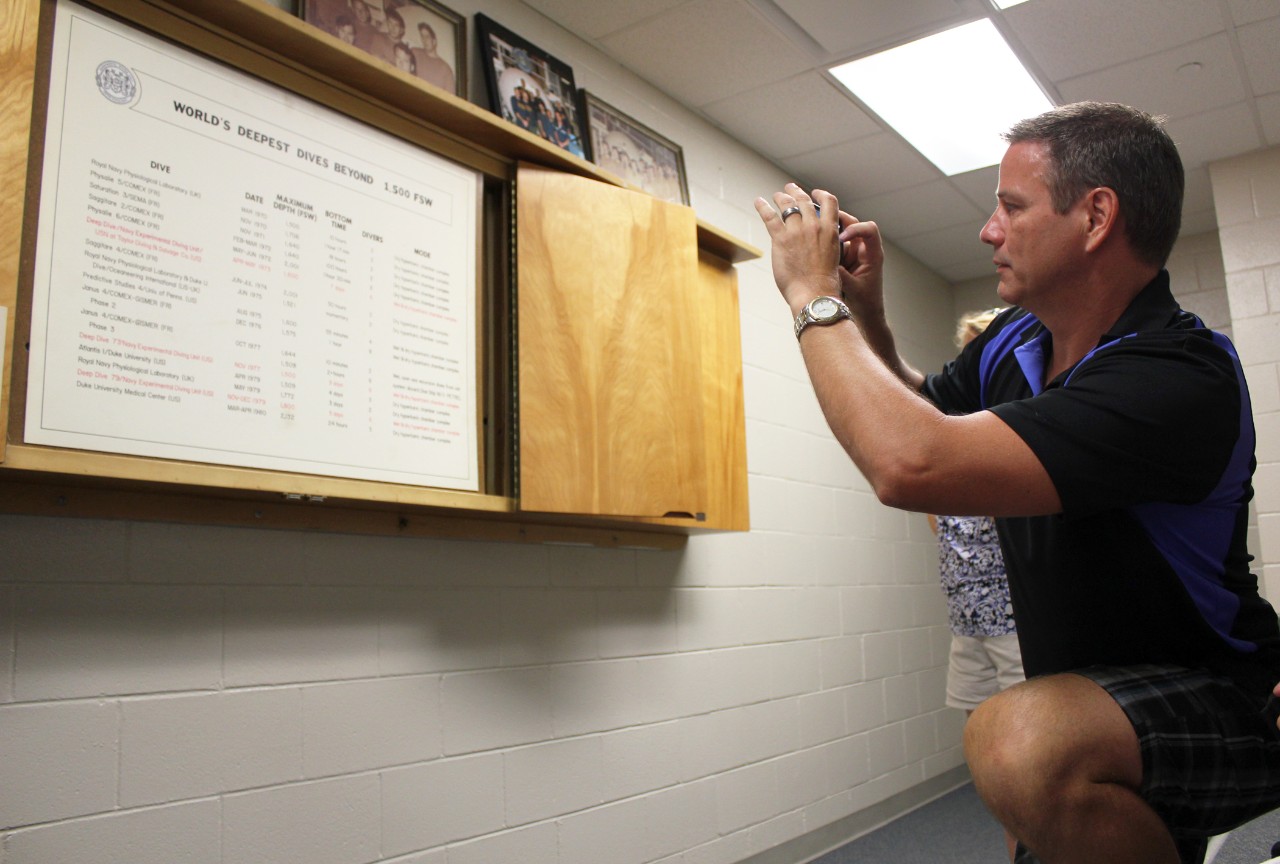 Caption: 150615-N-ZZ999-269: Cris Bartholomew, son of Capt. Charles “Black Bart” Bartholomew, USN, takes a photo of a board June 15, 2015 that features Navy Experimental Diving Unit’s (NEDU) deep dive records. One of the featured dive records includes a 1,800 ft. NEDU dive that happened in 1979 when his father was the NEDU commanding officer. Capt. Bartholomew served as the commanding officer from 1977-1980 and died during a dive in 1990. Today, a former Navy supply ship turned artificial reef called the “Black Bart” is visited annually by sport divers off the coast of Panama City, Florida. (RELEASED/Photo by Katherine Mapp, NSWC PCD Public Affairs).

PANAMA CITY, Fla – U.S. Navy Capt. Charles “Black Bart” Bartholomew’s legacy is alive and well as witnessed June 15, 2015 when his son, Cris, his wife and his four children toured the Home of Military Diving in Panama City, Fla. during the Year of the Military Diver.

Bartholomew was a 1961 graduate of the U.S. Naval Academy and the Webb Institute of Naval Architecture. He served as the Navy Experimental Diving Unit (NEDU) commanding officer from 1977-1980 and later as the Director of Ocean Engineering and Supervisor of Salvage (SUPSALV) in Washington D.C. He died during a dive in Panama City in November 1990.

While Bartholomew served at NEDU, the family lived in Panama City Beach and Cris Bartholomew fondly remembers living in officer housing, playing in the waters of St. Andrew Bay just steps from his back door, and visiting his father at work. Today, Cris and his family live in Elk Grove, Calif.

“I remember my Dad telling me we were going to have people over and he would give me a gunny sack and tell me to go fill it with oysters from the (St. Andrew) Bay. I remember I was so excited about coming back to Panama City on different orders so that we would have had a bigger, better house right there and I wanted that specific room,” he said, pointing to a neighboring officer’s home that also overlooked what is today the “new” Hathaway Bridge.

While visiting NEDU and the house he once lived in as a child, Cris discovered how some parts of his childhood remained the same, like NEDU where he was able to see his father’s legacy on a record-breaking deep dive board that still holds true today from 1979. Cris was able to share his father’s dive contributions with his children, “Black Bart’s” grandchildren. Cris' older son, Charles, is named after his grandfather.

“I remember him telling me I should come down here (to NEDU) because they were breaking a world record and that it would be really neat to see,” said Cris. “I’m glad I did.”

That was one of the record setting deep dives set in 1979 when NEDU divers conducted a dive to a simulated depth of 1,800 feet in the Ocean Simulation Facility, or OSF. The OSF simulates ocean conditions to a maximum pressure equivalent of 2,250 feet seawater (fsw) at any salinity level. The chamber complex consists of a 55,000-gallon wet chamber and five interconnected dry living/working chambers totaling 3,300 cubic feet of space. Wet and dry chamber temperatures can be set from 28 to 104 °F. Saturation dives can be performed for more than 30 days of continuous exposure in the OSF. 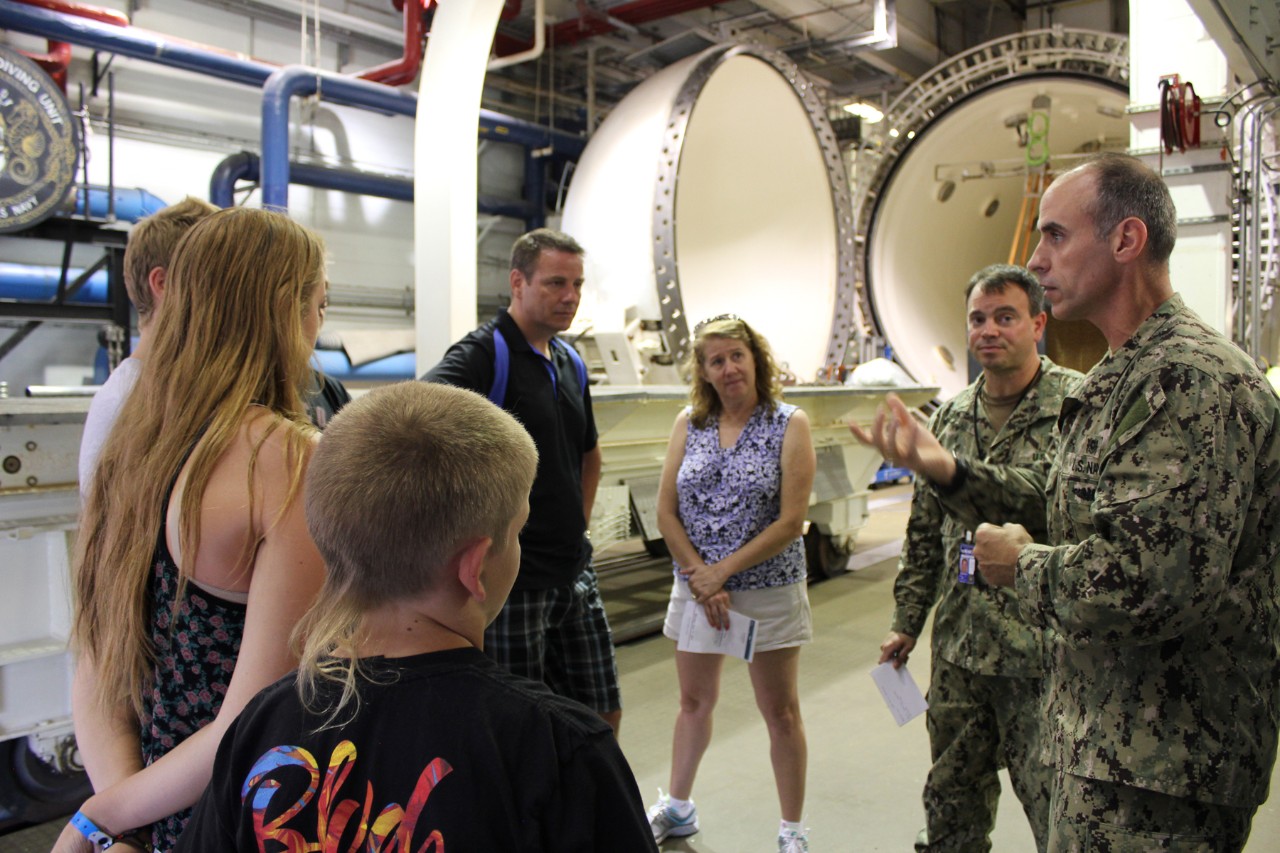 Throughout Cris’ family tour of the Naval Diving and Salvage Training (NDSTC), NEDU, and the Naval Surface Warfare Center (NSWC PCD), active duty and retired divers reached out to shake Cris’ hand and to tell him what his father meant to them and the Navy diving community.

“What your dad did for us was amazing. You're royalty to us,” said NEDU Command Master Chief Navy Diver, Master Chief Petty Officer (MDV/SG) Louis Deflice. “Your Dad was the real deal.”

“This is his legacy today,” said Hughson, pointing to the Mk-29 semi-closed circuit surface supplied dive prototype, affectionately referred to as “Eugene.” “Capt. Bartholomew was the one who promoted the use of and pushed for the development of lighter weight dive systems.”

At NDSTC, Cris and his family saw dive systems used by his father and learned back in the mid-1970s, there were multiple dive schools in the U.S. Navy – today there is only NDSTC.

Capt. Bartholomew had extensive salvage experience in Vietnam and also participated in salvage projects to include the Challenger Space Shuttle, United Airlines Flight 811, Air India and even in the U.S. Navy’s effort to support the Exxon Valdez oil spill cleanup effort.

“Man, we love him. His book “Mud, Muscle, and Miracles” was awesome,” said Navy Diver First Class Daniel Hilyard, USN (Ret.). “If he was alive, no doubt, he would’ve made admiral.”

Non-military divers may also appreciate his dive contributions when they visit Bay County and dive the Black Bart artificial reef that was once a 180-foot supply ship used for offshore diving operations. The reef today is located approximately six miles off the coast of Panama City and in 80 feet of water in the Gulf of Mexico. Sunk in July 16, 1993, the wreck was dedicated to the former SUPSALV director who was also an avid sport diver. It is passion today shared by his son who -- along with his wife, Kim -- dove the Black Bart during his June 2015 visit to Panama City Beach.

More information about the dive site is available at: http://www.adiscuba.com/dive-sites/290/black-bart/