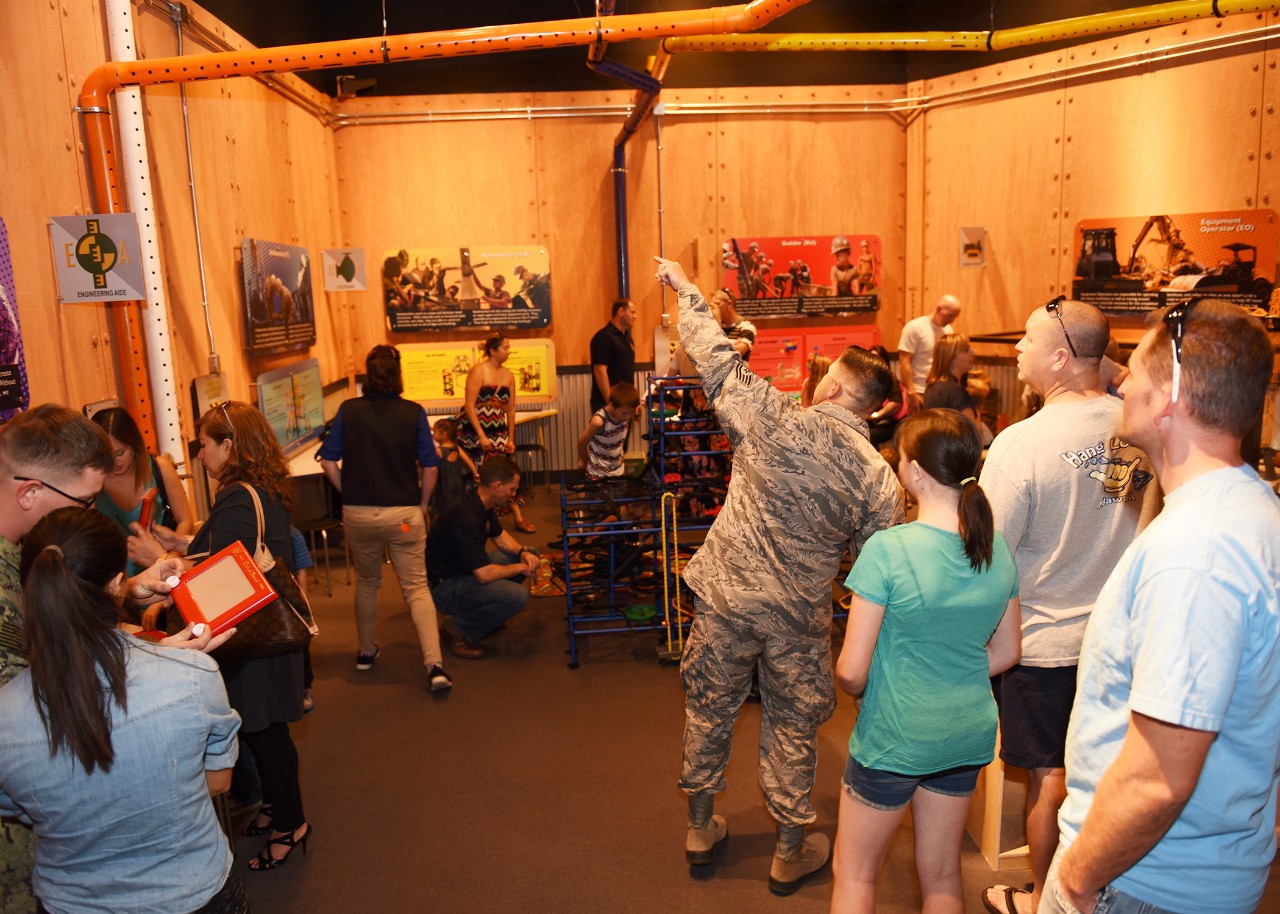 Caption: U.S. Navy Seabee Museum patrons explore the museum’s newest exhibit the Science, Technology, Engineering and Math (STEM) Center at the U.S. Navy Seabee Museum. U.S. Air Force Tech Sgt. William Powell and his wife Jessica donated the funds to build the center in memory of their daughter, Kennedy, who died in January 2014 from a rare illness when she was 15 months old. The exhibit will be the center of youth educational programming for the museum by tying in the educational tenets of STEM with the history and fundamentals of the Seabee job ratings. (Photo by Aramis X. Ramirez, Public Affairs Officer, U.S. Navy Seabee Museum/RELEASED

Science, Technology, Engineering and Math are the four educational tenets that stimulate innovation in today's youth. The focus of the STEM center will be to tie these tenets to the historical resourcefulness and ingenuity of the Navy's construction force, better known as the Seabees, as well as the Civil Engineer Corps (CEC), and Underwater Construction Teams.

Funding for the exhibit came from an unexpected source, said Dr. Lara Godbille, museum director. U.S. Air Force Tech Sgt. William Powell and his wife, Jessica, offered the money they raised from a memorial fund in honor of their middle child, Kennedy, who died Jan. 2, 2014 as a result of a rare bowel obstruction.

"Our goal with this exhibit is to give back to the children so that they may learn to love, grow, and play," said Tech Sgt. Powell. "Kennedy was the happiest of babies and I know that she would want nothing but happiness and love for the children and families that get the chance to play and learn here at this exhibit."

Both Powell and Godbille believe the joint effort in bringing to life the STEM center will demonstrate the importance of educating today's youth.

"STEM transcends military branch and industry in today's world," said Godbille. "It is vital to offer a space of learning for today's youth in a way that stimulates imagination, fosters communication and teamwork, and allows a free flow of ideas, much in the same way the Seabees have done throughout their history. But this is not just a Seabee exhibit, or an Air Force one; it's an exhibit that embodies the ideals of learning and community that everyone can enjoy."

Museum Curator Kim Crowell, who served as project lead for the STEM Center noted the theme of cooperation and teamwork, was most important in the exhibit's construction.

"Any exhibit in the museum is the result of thousands of man hours," she said. "With this one, it was important that the community play a part, so we enlisted the aid of Seabees from [Naval Mobile Construction Battalion] Four so that they could contribute to the space that will inspire children to think in ways that could make better thinkers and leaders in the future."

To simulate that thinking, visitors in the exhibit are presented with interactive presentations on each of the seven Seabee job ratings and the Underwater Construction Team.

"Toys such as remote-controlled Caterpillar tractors, mini-wind turbines, chaos towers, sound-powered telephones, and building toys such as Lego bricks allow patrons to experience STEM in a fun way," Crowell explained. "There was a lot of love that went into this exhibit. We hope the community finds as much fun in it as we had in designing and building it."

Hi-resolution images of the launch event can be viewed and downloaded at the Seabee Museum's Flickr page: https://www.flickr.com/photos/usnavyseabeemuseum/sets/72157653723516470