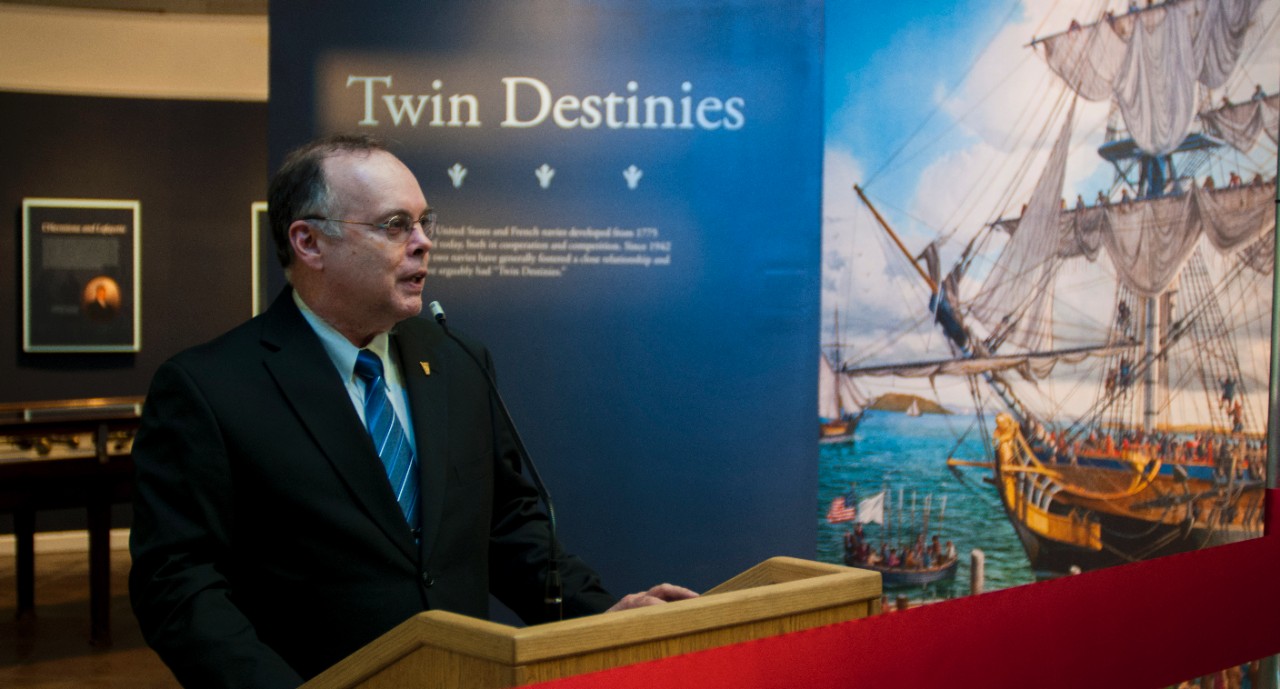 Caption: WASHINGTON (June 8, 2015) - Director, Naval History and Heritage Command, Rear Adm. Sam Cox (Ret.) speaks at the opening of the exhibit "Twin Destinies" in the National Museum of the United States Navy, June 8, 2015. Twin Destinies showcases the partnership between the American and French navies from the creation of the country to the present. (U.S. Navy photo by Mass Communication Specialist 2nd Class Eric Lockwood/Released)

WASHINGTON – As the French tall-ship replica, Hermione, makes her way up the East Coast, the National Museum of the United States Navy opened an exhibit June 8 to showcase the historic relationship between the U.S. and France: Twin Destinies: The U.S. and French Navies.

Representatives from both the French and U.S. navies were in attendance to mark the history of the two great maritime nations and celebrate their shared heritage. 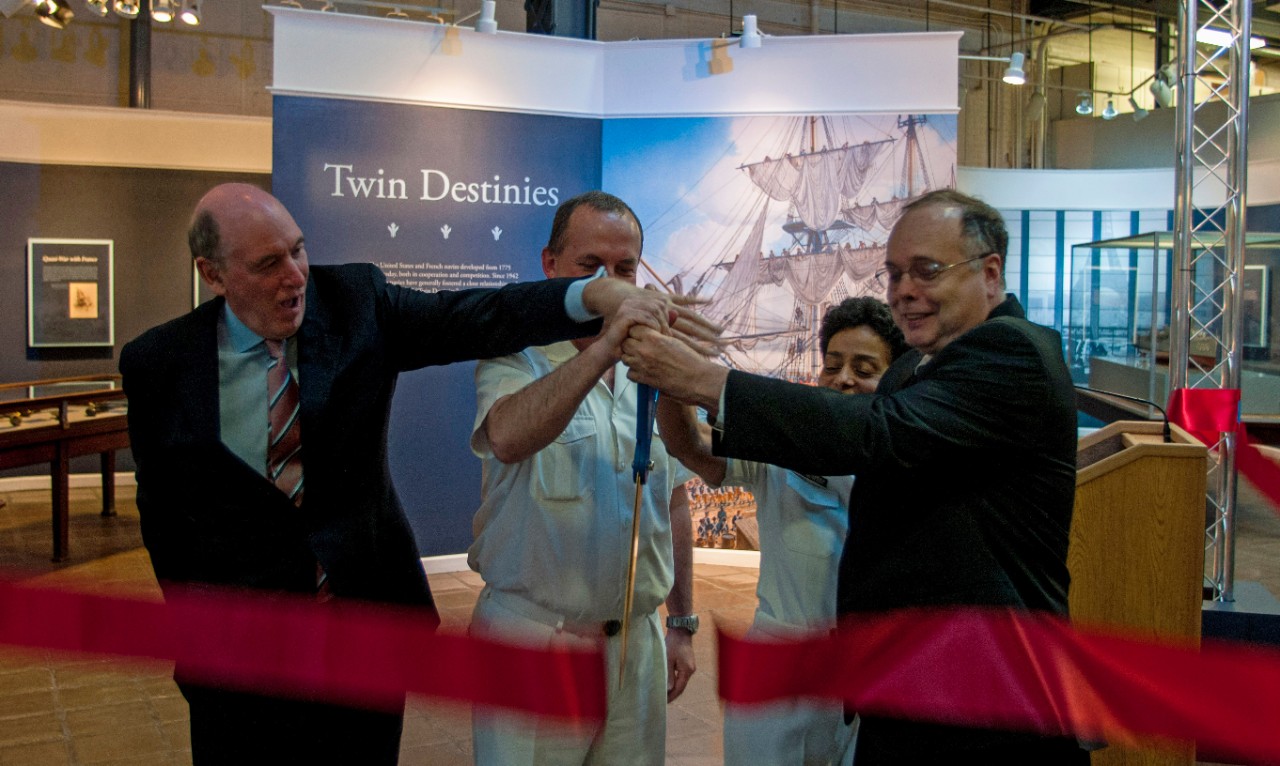 Using the ribbon cutting as a backdrop allowed French Rear Admiral Hervé Bléjean, the French navy’s Director of International Engagement, to note France’s “unique and unbreakable friendship with America” and remark that it is a relationship sustained still today.

While “the friendship was forged almost 240 years ago,” said Bléjean, “the partnership of our two navies has been closely intertwined ever since.”

Vice Chief of Naval Operations Admiral Michelle Howard, an avid advocate of naval history, was also in attendance to mark the occasion. She paid tribute the relationship between America and France using the personal motto coined by Marquis de La Fayette, “Cur non” or “Why not?” It was that attitude which drove a young nobleman to sail to the new world in support for freedom and sparked a friendship with the American colonists.

After the many years and shifts in the global culture, Lafayette's can-do attitude has served as an inspiration to both navies for more than two centuries.

“So today, why not launch and recover our fighter jets aboard each other’s carriers and fly combat sorties together,” said Howard. “The integration of our flight operations in countering ISIL demonstrates the highest levels of interoperability between two navies.” 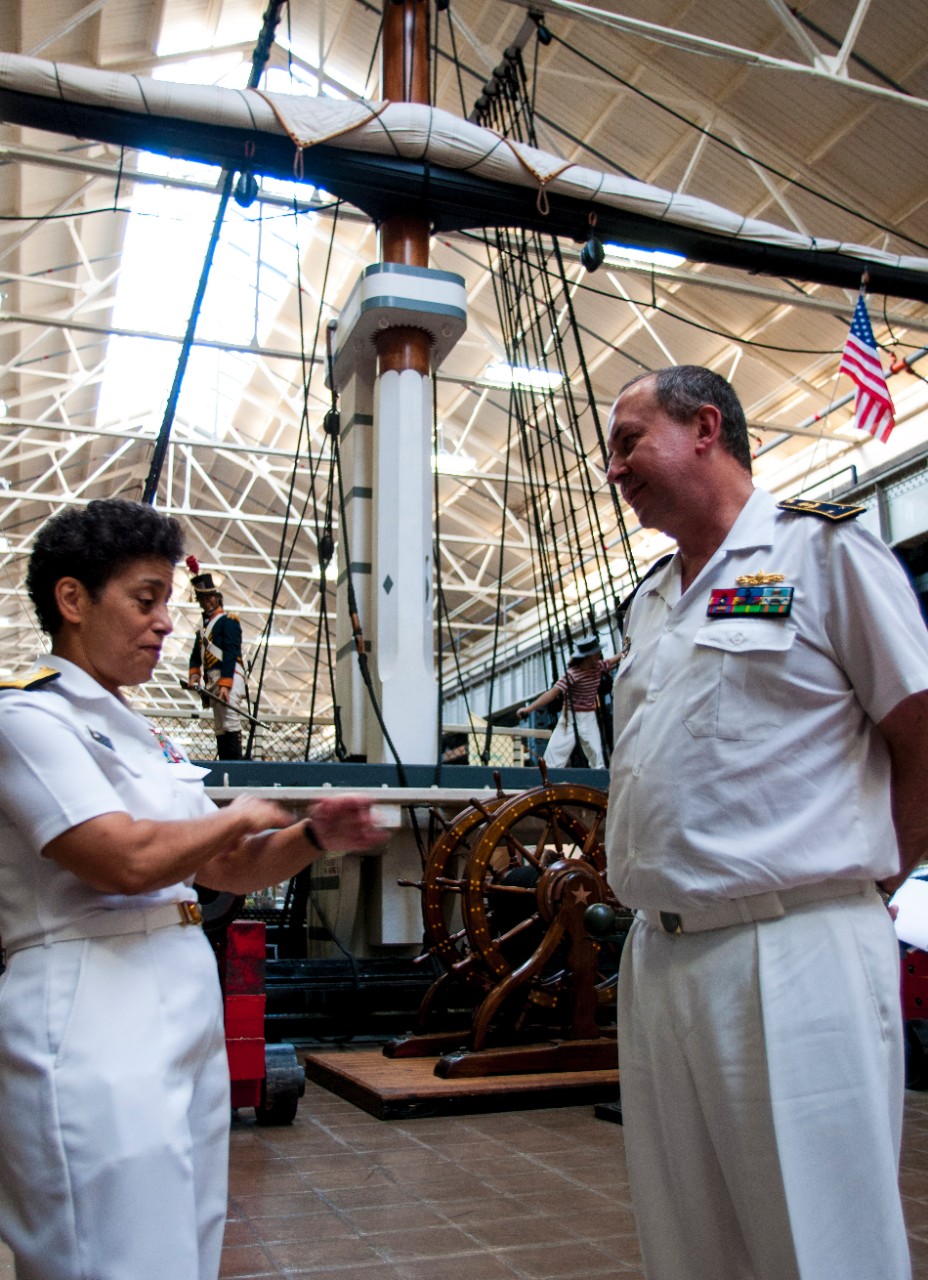 The exhibit’s designers hope that as visitors come to see the artifacts, they will first recognize the wall-sized mural of Tom Freeman’s painting, "Destinies of Honor," of Lafayette stepping onto the Hancock Warf in Boston. The display, a significant portion of the exhibit itself, is noteworthy because it depicts the first time Lafayette comes to America and spreads the news that French troops would soon arrive to support the American colonists in the Revolutionary efforts.

As a whole, the exhibit “mirrors the two nation’s cooperation from the beginning. The Twin Destinies exhibit shows their parallel histories in the artifacts and artwork on display,” said the museum’s curator, Dr. Edward Furgol, Ph.D.

Why dedicate space and resources to two country’s shared naval histories? Furgol says the Franco-American alliance illustrates our nation’s history and the Twin Destinies exhibit invites visitors to learn more about their American heritage through this one of many important historic partnerships. He believe the history of America and France is a shared history and the artifacts on display, like the sand from the Liberation of Normandy and the founding of the NATO organization, and combined anti-piracy missions off the coast of Africa tell the story of the historic development of both nations.

In addition to the Twin Destinies exhibit, the museum has even more to display the partnership between French and U.S. Navies. “The museum has artifacts and stories that link the two navies literally from the front of the museum to the back,” said Furgol. “As a secondary part of the exhibit, we have created a scavenger hunt for visitors to see all the French and American connections from the 1770’s, onward.”

Out of this experience, Dr. Furgol hopes visitors have a better “appreciation of cooperation between two navies” and understand that the relationship does not “just consist of combat but also world commerce and presence together.”