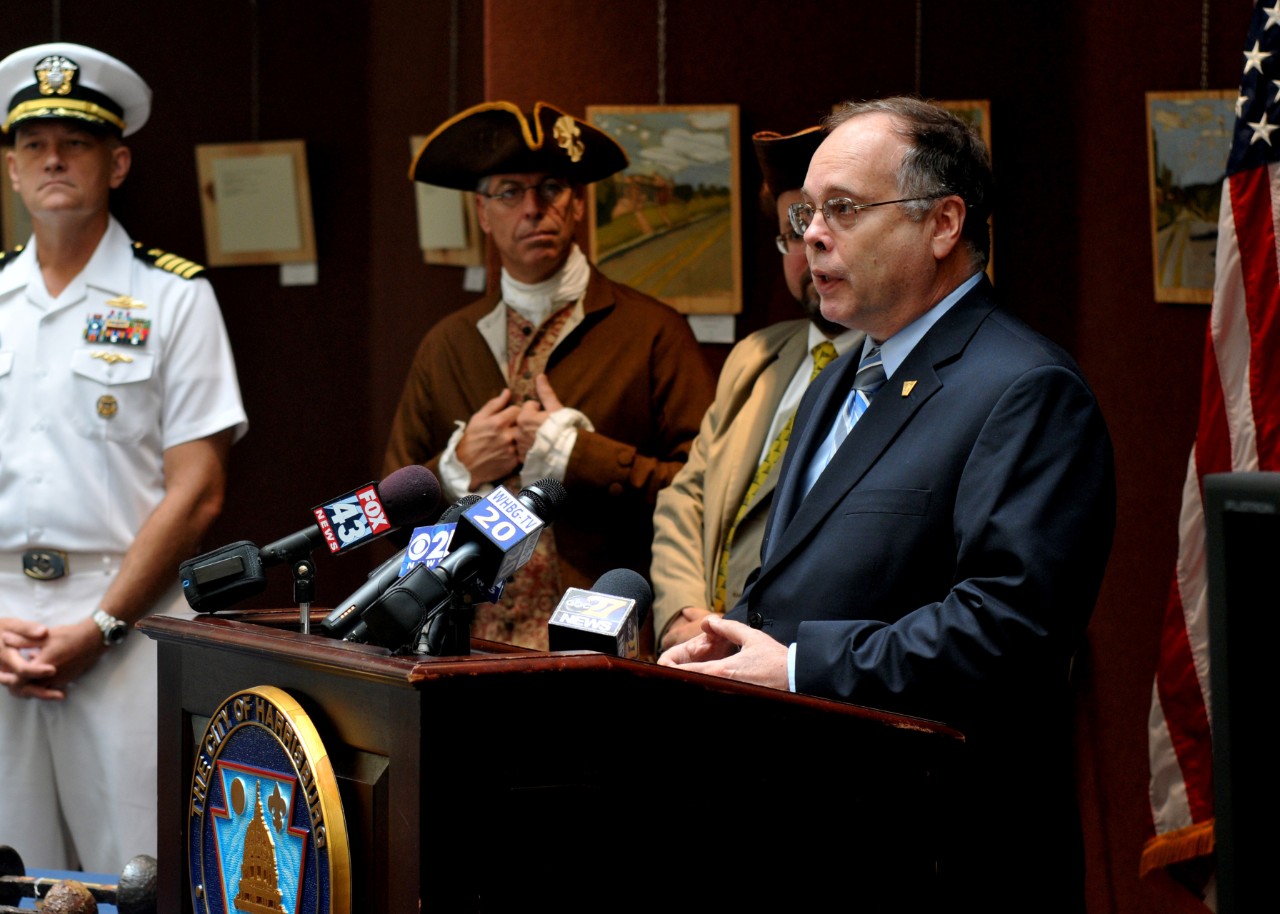 HARRISBURG, Pa. -- The city of Harrisburg formally presented the remains of Continental Navy schooner Royal Savage to the U.S. Navy during a press briefing at City Hall July 1.

Mayor Eric Papenfuse presided over the event in which Naval History and Heritage Command (NHHC) Director Sam Cox accepted the artifacts on behalf of the Navy.

“This ship, and its artifacts are now going to be preserved and cherished for the public for generations to come as they should be,” Papenfuse said, adding “for the last 20 years, the artifacts have stayed in storage, out of public viewing, and we are pleased today to bring them to the light of day and to make sure they are being given the proper care.”

Cox thanked the mayor and the people of Harrisburg, letting all know the artifacts are in good hands.

“The United States Navy takes very seriously our obligation to protect and preserve the heritage of the Navy and our nation,” said Cox. “The first thing we will do is go through a process of preserving and protecting them for the long term. As we go through that process we will open the process up to scholars; archeologists and historians have much to learn from this.”

Art Cohn, of the Lake Champlain Maritime Museum, was also on hand for the historic return of the Royal Savage. He shared the ship’s story, its role on Lake Champlain, and the importance of studying her remains.

“I am here to celebrate and extend gratitude to the city of Harrisburg and to the Naval History and Heritage Command for their extraordinary cooperation in preserving a hugely important piece of American History,” Cohn said. 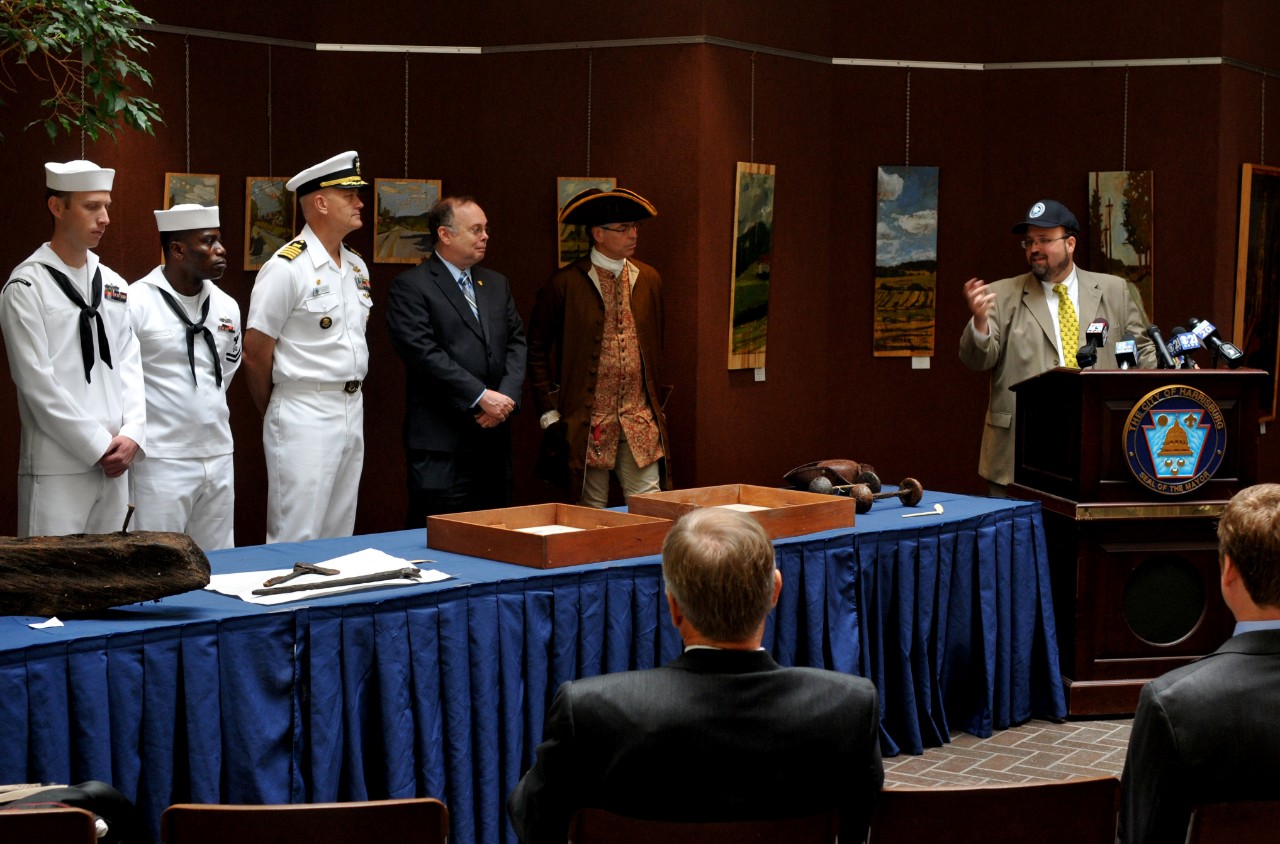 Royal Savage, a two-masted schooner, originally served in the British Royal Navy. The ship was damaged and sunk by American forces under Richard Montgomery during the siege of St. Johns, Quebec, in the fall of 1775.

After Americans took the fort there Nov. 2, the ship was raised and repaired. With the small schooner Liberty and the sloop Enterprise (ex-HMS George III), Royal Savage formed the nucleus of the American Lake Champlain squadron. That squadron, under Benedict Arnold, denied the British use of the lake during the fall of 1776 and thus contributed to British Gen. John Burgoyne's defeat at Saratoga.

In June of 1776, the American force, pushed from Canada, fell back to Crown Point, Skenesborough, and Fort Ticonderoga. There Arnold pressed his forces to complete a shipbuilding program before the British completed their squadron. In late August, 10 of his ships were finished and he moved north with Royal Savage as his flagship.

He scouted the lakeshore well into September. On the Sept. 23 he moved his fleet into an anchorage at Valcour Island, separated from the western shore by a half-mile channel, to await the remainder of his squadron, and the British.

With the arrival of the galley Congress, Arnold shifted his headquarters to that boat, and continued to wait. On Oct. 11 the north wind carried the British past the island.

American ships, including Royal Savage, appeared, fired on the enemy, and retreated back into the southern entrance to the channel, where the remainder of Arnold's force was positioned to meet the enemy. Arnold’s plan was to defeat the British if possible, but, at all cost, to delay them.

Coming in from the south, the British force was handicapped by the wind. Arnold's planning and the British acceptance of the bait had given the Americans a chance to carry out their mission.

Royal Savage, however, ran aground on returning to the American line. Undefendable, she was abandoned. Despite attempts to reboard her, she was taken by the British and burned.

The ship remained in the lake until it was raised in 1934 by marine salvor and amateur archaeologist Lorenzo Hagglund. According to Cohn, Hagglund’s family held onto the remains of the ship and associated artifacts until being purchased by the city of Harrisburg in 1995. 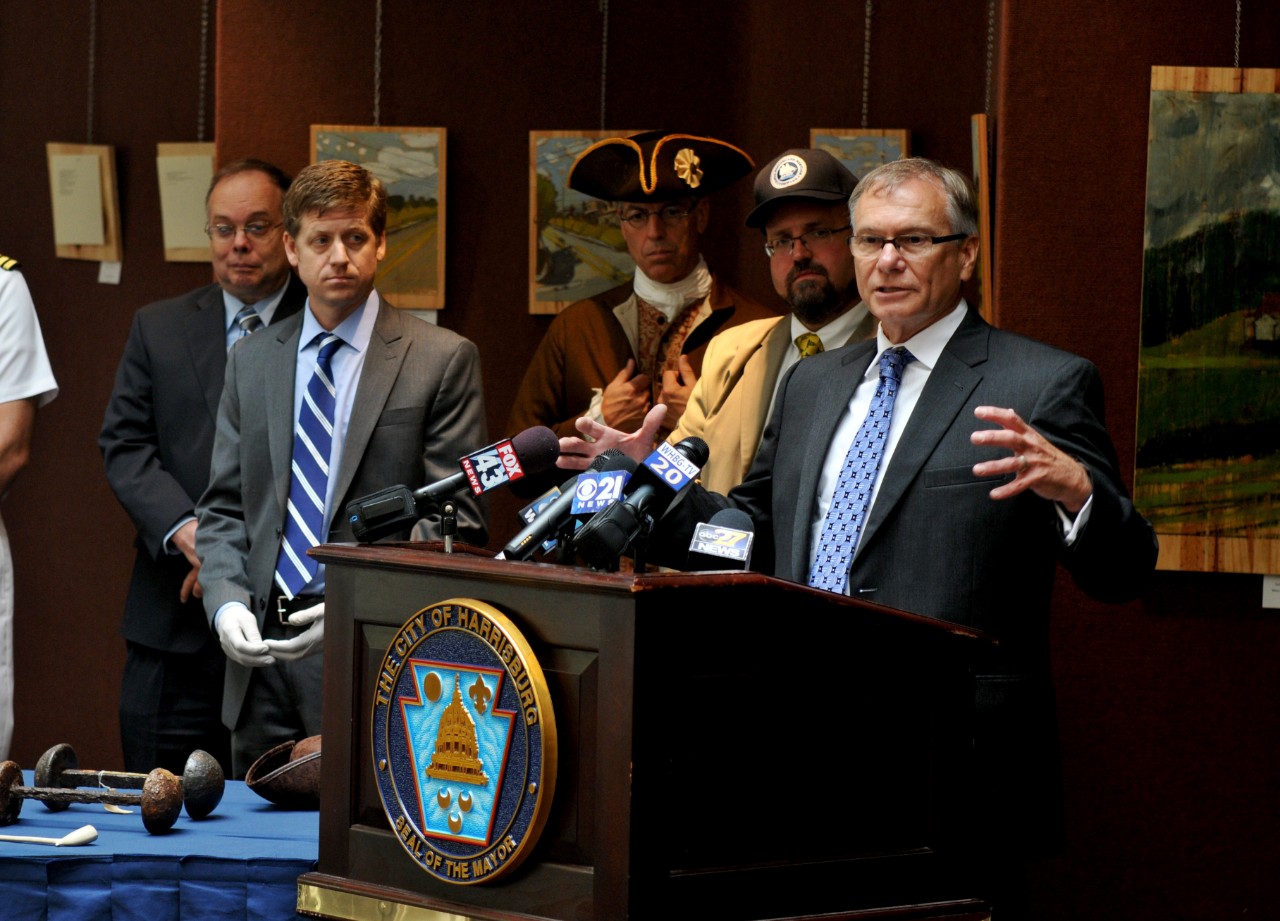 Caption: 150701-N-TH437-005 Harrisburg Pa. (July 1, 2015) – Robert Neyland, Underwater Archaeology Branch Head with Naval History and Heritage Command, answers questions at a ceremony during which the mayor of Harrisburg, Pa., formally returned artifacts and timber recovered from Revolutionary War-era schooner Royal Savage to the Navy for preservation and conservation on July 1. Royal Savage served in the American Lake Champlain Squadron under Benedict Arnold during the American Revolution before running aground and being burned by the British in October 1776. Now in the possession of the U.S. Navy, the Naval History and Heritage Command will preserve and study the artifacts with the intent for future exhibition. (U.S. Navy photo by Mass Communication Specialist 2nd Class Eric Lockwood/Released)