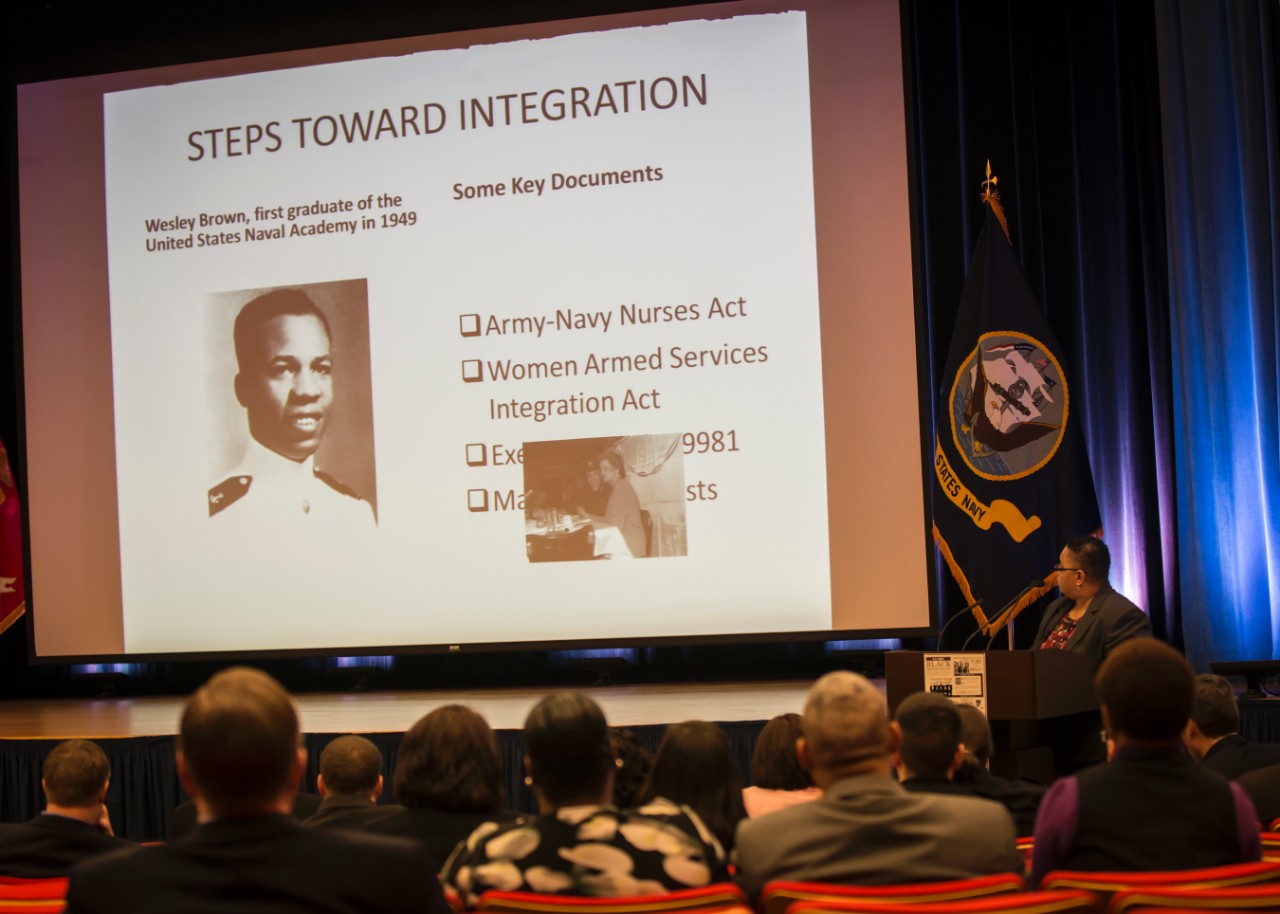 WASHINGTON (NNS) -- Dr. Regina Akers, an historian with the Naval History and Heritage Command and an expert on diversity issues in naval history, was the keynote speaker at an event in honor of Black History Month Feb. 23 at the Pentagon.

During the hour-long discussion, Dr. Akers presented highlights of African Americans' military participation as it pertains to this year's theme "A Century of Black Life, History and Culture." She discussed the gradual and progressive changes in acceptance during the World Wars up through today. She also gave a look ahead and how everyone has a role in mentoring others to grow.

Akers also described how African Americans made significant sacrifices, supporting World War I during a time when lynching was still common and those who migrated from the South to the North were "disappointed to learn that racism prevailed above the Mason-Dixon line. Some blacks remained in Europe after having a more positive race experience there."

In talking about "the Golden 13," an experiment to enable black men to join the officer ranks, Dr. Akers said, it was a plan that "was supposed to fail, but it didn't fail."

Sixteen black students all passed, and were eligible - but only 13 were accepted. Akers believes that ongoing dialogue among Sailors about this and other examples is "not to dwell on the past," but rather, it's important to talk about these important truths in order to "remind us that they served - and they served with distinction."

During World War II, greater steps toward integration began, said Akers. She went on to talk about the necessity of more people during a dire situation which led to more black men and even women joining the ranks to serve a country that still held great prejudices.

During the Korean War and even more so during Vietnam, the military took greater strides in removing segregation from its ranks and took bigger steps toward integration and enabling more black men to lead.

During the 70s, Adm. Elmo Zumwalt, then the youngest Chief of Naval Operations, was a catalyst in righting the many prejudicial wrongs against all minorities. "What he did was incredible," said Akers. "He was a key member for human rights change."

Akers advised that while the Navy is further from the "we got one" mentality, meaning that representation should not be considered accomplished by single digits, "we still have a problem - it's not like we're all there yet."

Making real diversity a reality across the fleet has to come from within, she said.

In closing, Akers encouraged the audience to nurture and grow future leaders, regardless of race or gender. She also added that all Sailors should strive to learn something new every day and one way of doing that is through researching history because there are still so many great accomplishments and leaders from a wide variety of backgrounds not yet known, she said.

A great place to gain this knowledge is by visiting NHHC website's special page on African Americans in the Navy http://www.history.navy.mil/browse-by-topic/diversity/african-americans-in-the-navy.html