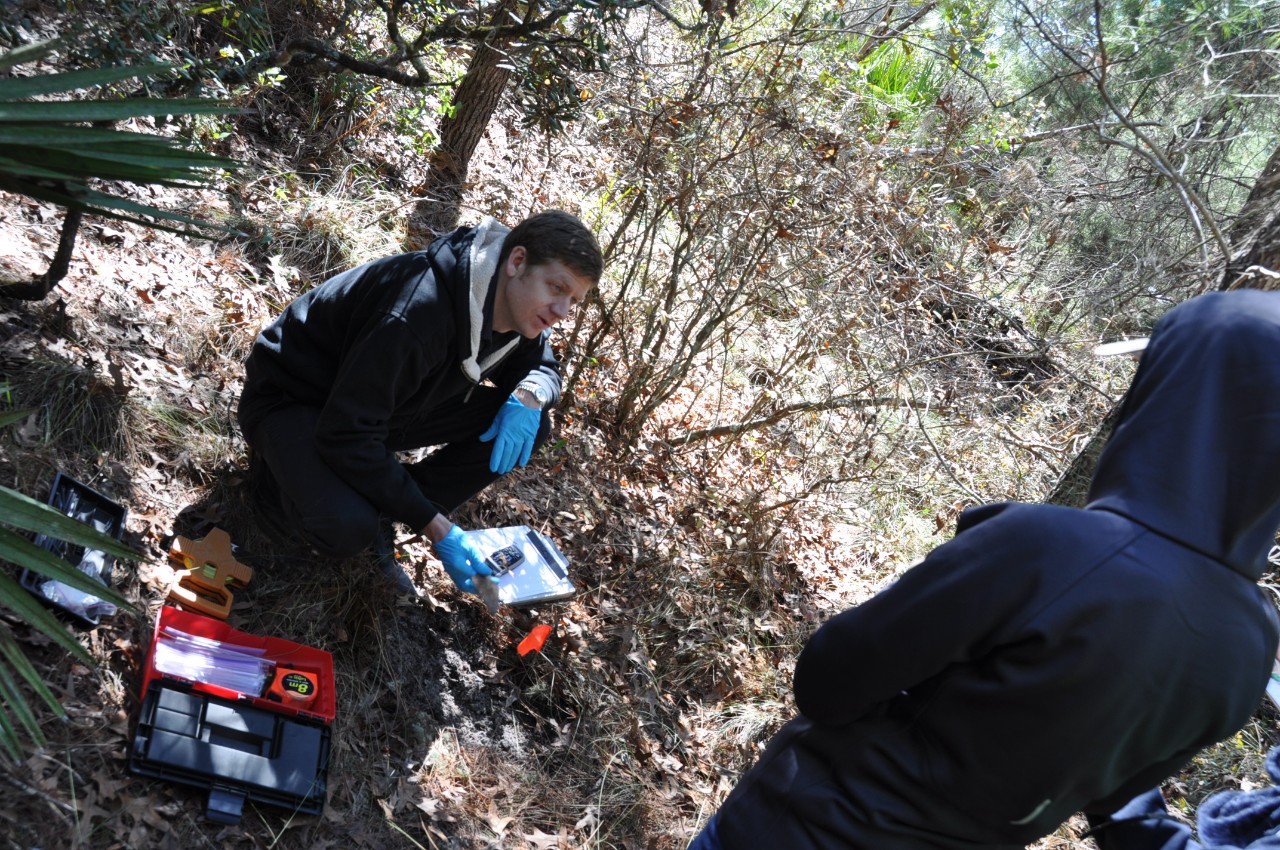 OSTEEN, Fla. (NNS) -- Naval History and Heritage Command (NHHC) Archaeologist Dr. George Schwarz was joined by more than 45 volunteers from nearly a dozen organizations wading through dense vegetation and sifting through Florida sand Feb. 18-20 in the hopes of finding more clues to a Navy aircraft crash that happened more than seven decades ago.

Osteen resident Rodney Thomas uncovered what appeared to be a part from an aircraft more than three years ago when he was experimenting with a new metal detector on his property. After finding dozens of pieces, he decided he wanted to learn about what might have led to the crash, and perhaps the identity of the pilot.

He contacted Scott Storz, a volunteer at the DeLand Naval Air Station Museum (DNASM), in search of help understanding what he was finding. One small, two-inch square, slightly crumpled piece of metal gave the first significant clue with a clearly visible engraving: SBD-5.

Best known for their superior performance in sinking four Japanese aircraft carriers during the Battle of Midway, which halted the Japanese advance across the Pacific during the war, the SBD Douglas Dauntless was a "highly effective dive bomber," and its design made the aircraft capable of steep, accurate diving attacks of up to 70 degrees, according to the National Naval Aviation Museum website.

Thousands of pilots trained in these aircraft at DeLand Naval Air Station, Florida, which the Navy operated from 1942-1946. The site was returned to the city of DeLand after the war, and is still in operation today with one 4,300 foot-long runway and a longer one that is 6,000 feet.

Because of the way records were kept at the time, when Storz eventually contacted archaeologists at the NHHC to check on the possibilities, the crash site could not be immediately linked to a specific report. In an effort to identify the crash and account for possible loss of life, Schwarz contacted colleagues in Florida to ask for volunteer field support in assessing the site.

"I reached out to professors that I know at the University of West Florida (UWF) to ask if any students might be interested in gaining some experience excavating aircraft remains," said Schwarz. "They responded that it would be a great opportunity for a couple of graduate students."

Representatives from both the Lighthouse Archaeological Maritime Program (LAMP) and Florida Public Archaeology Network also responded sending a team of five experts to the site while Schwarz was on the site in Osteen. According to Schwarz, their experience, diligence, and patience were critical to evaluating hundreds of metal pieces, nearly 300 of which were likely part of the high-speed crash.

"I'm doing my graduate thesis on submerged aircraft sites so when I heard about this project from my professor, I jumped at the opportunity to gain experience documenting fallen aircraft parts," said Mauro. "This was my first time working closely with metal detectorists so they showed me how to interpret the results on their screens when they scan an item. Some of these volunteers are retired veterans, they all had guesses on what certain distinguishable aircraft parts were."

The largest group of volunteers, 30 people came from The Central Florida Metal Detecting Club (CFMDC), which had been asked by Storz to assist Thomas in evaluating the parts he was finding. In December, they uncovered many more artifacts, which prompted the phone call first to the National Naval Aviation Museum, and then to NHHC. Schwarz requested that the CFMDC halt their search for the artifacts until a plan could be developed to more methodically assess the site. He then asked for the GPS coordinates of the area.

"We searched through our database and found 25 SBD-5s from DeLand Naval Air Station (NAS) that crashed on land," said Schwarz.

While most were lost north of the DeLand NAS, "there are six total possibilities from our records, but locational information is very vague on these crash sites," said Schwarz.

According to Ken Torbett, 94, who worked at DeLand NAS in his early 20s, when a plane crashed, a team would be sent to the site to recover as much of the plane as possible, as parts were scarce. They would also make every effort to recover the pilot's remains and return them to their families.

Since every Navy plane is tracked by its bureau number, which is located on the aircraft's tail, investigators are unlikely to uncover that precise linkage to the crash. One of the largest pieces discovered at the site during Schwarz's visit was an exhaust pipe. However, a careful inventory and GPS documenting of the pieces that were found might provide further information on the possible identity of the aircraft and pilot.

Of the six crashes that Navy has records for in that area, five were known fatalities. In all cases, the pilot and aircraft were known, but the exact match to the Osteen site has yet to be determined.

Assisting in the evaluation were members of K-9 Search and Rescue of Orange City. The first order of business was to have the unit sweep the site in search of human remains. Established 13 years ago, members are required to be trained in CPR, incident command, K9 first aid, map and compass navigation, crime scene preservation, hazmat awareness, bloodborne pathogens and have ham radio licenses.

Although the canines expressed interest in certain areas of the site, and a few test pits were excavated by archaeologists to a depth of approximately a foot and a half, no evidence of human remains were found. If anything had been discovered, then the state medical examiner would have been brought in to evaluate the remains.

NHHC archaeologists, armed with more data, will continue to work with the DLNASM, which retained the majority of the parts on loan for their historical value to their community.

"We will input GPS data, analyze the artifacts to get a sense of what is present at the site and see if we can find patterns, such as a concentration of cockpit materials. We will also catalogue the artifacts and write a report on the findings," said Schwarz.

While three days does not seem like much time, it did give archaeologists an excellent opportunity to work with the local community to assess the site and decide if additional time would be necessary for a longer, more intensive survey.