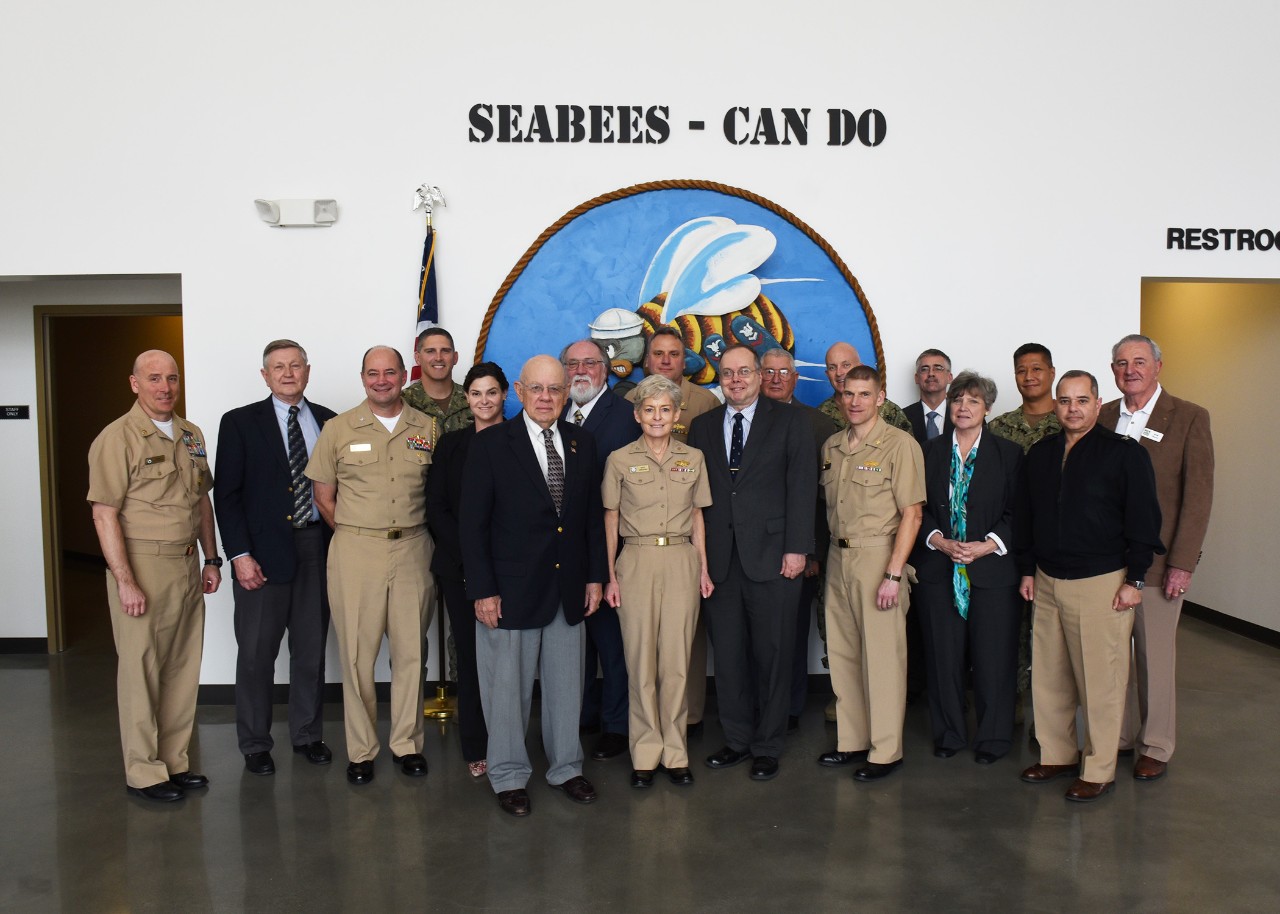 Caption: 150130-N-JU810-001 PORT HUENEME, Calif. (Jan. 30, 2015) Members of the Naval History and Heritage Command (NHHC) Museum Advisory Council (MAC), stand for a picture in front of the Seabee logo in the grand hall of the U.S. Navy Seabee Museum. The MAC convened to review strategic and operational planning for the Seabee Museum and will travel around the country to do the same for all ten NHHC museums. (U.S. Navy photo by Aramis X. Ramirez, Public Affairs Officer, U.S. Navy Seabee Museum/RELEASED).

The museum received the go-ahead to proceed with planning during the inaugural meeting of the Museum Advisory Council (MAC) Jan. 30 in the museum's education room.

"Commemorating the 75th and 150th anniversaries of the Seabees and CEC respectively is an opportunity to bring together all generations of this prestigious community and celebrate their immeasurable contributions to this nation and the entire world," said Dr. Lara Godbille, museum director. "I'm delighted the MAC accepted our proposal to move forward with our plans that will give the community and the public at large a chance to honor those who have served in the Navy's construction force in an environment shaped by their stories."

Godbille explained the theme of the events and exhibit presentations over the next two years will be focused on preparing the museum for the anniversary events and that the MAC's role will be to ensure all activities fall in line with those goals.

The MAC is comprised of Navy and civilian leadership from various commands and organizations including the Naval History and Heritage Command (NHHC), Naval Facilities Engineering Command, Naval Expeditionary Combat Command, Naval Base Ventura County, and the CEC/Seabee Historical Foundation. The purpose of forming and convening the MAC is to annually review the operational, interpretive, and strategic planning of the museum, its exhibit presentations and public programs and offer guidance.

The necessity of a MAC for all NHHC museums, 10 in all, was promulgated by Navy operational instruction released in August 2014 that outlined procedures and established guidelines for museum stakeholder organization activities.

"It is important to share this information with the people in our community because ultimately we are accountable to them," Godbille explained. "We have a responsibility to tell the Seabee/CEC story with dignity and respect and keeping the public informed as mandated by instruction and the MAC ensures the trust this museum has worked several decades to build stays intact as we move forward."

The impact of the MAC and the museum's plans for the next two years can already be seen with the introduction of the previously announced education program for which the first Valentine-themed event will be held Feb. 14 at 10a.m. in the museum's education room. Other presentations are forthcoming and will be announced as the museum gets closer to making them publicly available.

The U.S. Navy Seabee Museum works to select, collect, preserve and display historic material relating to the history of the Naval Construction Force, better known as the Seabees, and the U.S. Navy Civil Engineer Corps. The second oldest of the official Navy museums, the Seabee Museum was established in 1947 in Port Hueneme, Calif. which today is part of Naval Base Ventura County (NBVC).

Hi-resolution images from the museum's archive are available on our Flickr page: https://www.flickr.com/photos/usnavyseabeemuseum/