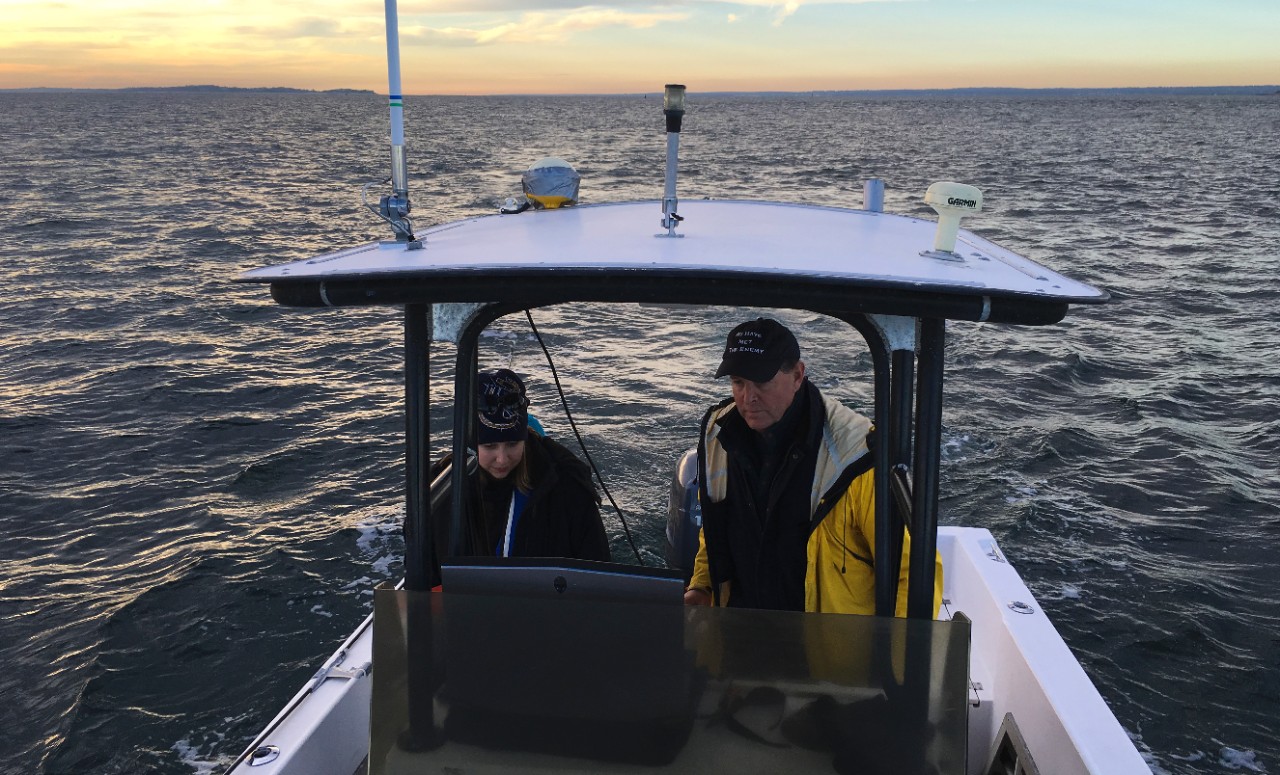 Caption: ATLANTIC OCEAN (Dec. 7, 2015) - Blair Atcheson, an underwater archaeologist with Naval History and Heritage Command, and Charlie Buffum survey the wreck site of an early 19th Century ship in the Atlantic Ocean off the coast of Watch Hill, R.I., Dec. 7, 2015. The site has been identified as potentially being the wreck of the schooner USS Revenge which was commanded by Commodore Olive Hazard Perry. The site, which consists of cannon, carronade, anchor, and other concreted objects, was first discovered by local divers Charlie Buffum, Craig Harger, and Mike Fournier in August 2005. (U.S. Navy photo by George Schwarz/Released)

We're grateful for the opportunity to collaborate with the gentlemen who discovered the wreck," said Schwarz. "Their knowledge of the site and local conditions have been invaluable and we look forward to partnering with them in the future."

Revenge ran aground in thick fog and heavy swells on the night of Jan. 9, 1811 and subsequently sank. The area is home to a number of other 19th century vessels that shared the same fate as Revenge over the past 200 years. The site in question consists of cannon, carronade, anchors, and other concreted objects.

The survey was a cooperative effort between NHHC and Buffum and Harger. While NHHC provided survey equipment and archaeological expertise, the discoverers donated their time, knowledge of local sea conditions, and use of their vessel and fuel to complete the survey.

With the use of Buffum's 20-ft fishing boat, the team towed NHHC's marine magnetometer, an instrument capable of detecting ferrous materials on the seafloor by recording variations in the magnetic field. These variations can indicate the presence of iron artifacts such as cannon, anchors, shot, ballast, and other objects that might otherwise be undetectable in sonar surveys.

Due to the shallowness of the reef on which the wreck lay, in less than 20 feet of water, the magnetometer was towed on the surface. Dense foam attached to the sides of the towfish, the receptacle for the magnetometer instrument, ensured buoyancy and prevented the equipment from hitting the reef. The team covered a rectangular grid 650 x 380 yards over the center of the known wreckage on and around the reef.

After running aground back in 1811, the rigging, sails, and a number of ordnance were saved before the vessel was lost. However, Perry ordered his men to jettison the masts, anchor, and eight of the ship's fourteen cannon in an unsuccessful attempt to lighten the vessel and haul off the reef. A portion of Revenge, consisting of the deck and bulwarks, floated off the reef as a result of the vessel bilging in two places. Unfortunately, the combination of high wave energy, shallow waters, and the rocky reef upon which Revenge was temporarily stranded, led to the hull's rapid deterioration. 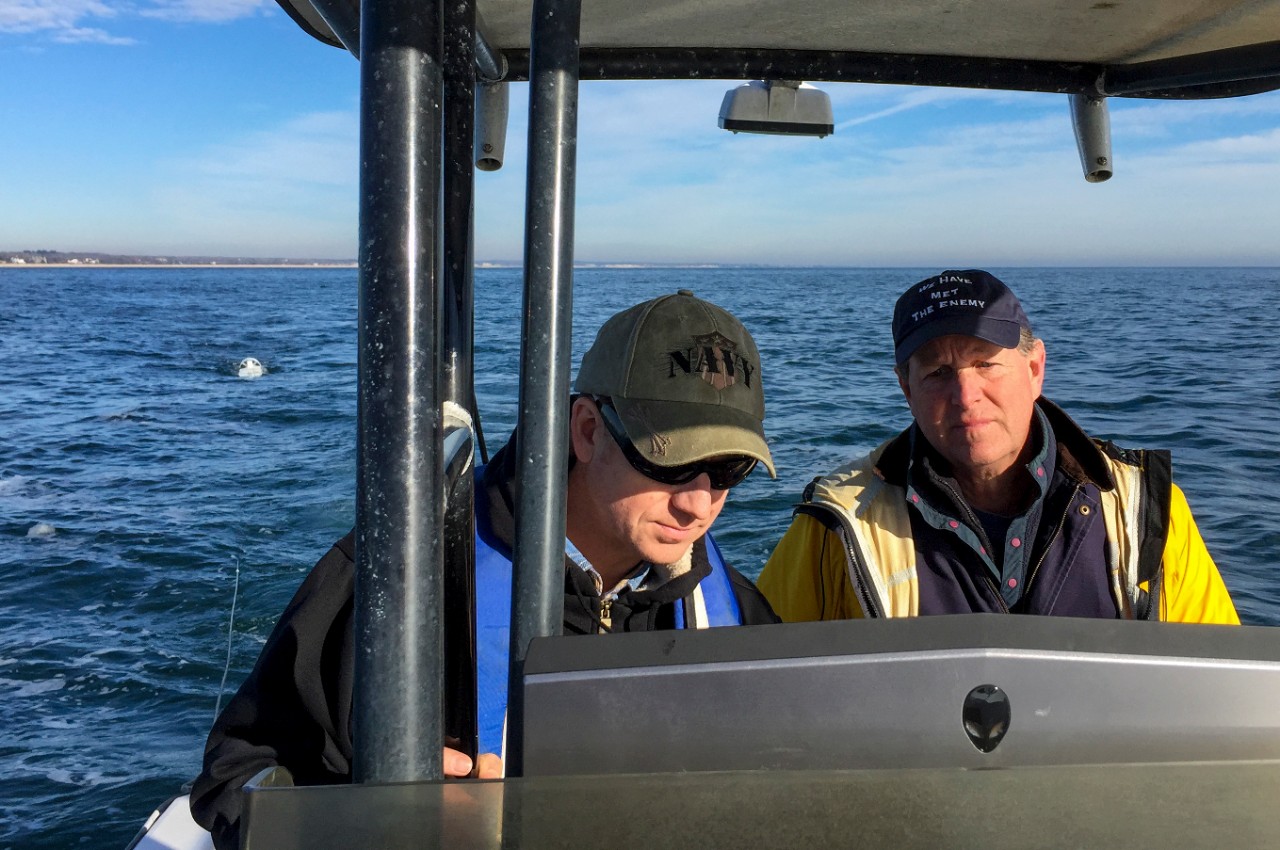 Caption: ATLANTIC OCEAN (Dec. 7, 2015) -- George Schwarz, an underwater archaeologist with Naval History and Heritage Command (NHHC), and Charlie Buffum survey the potential wreck site of USS Revenge in the shallow waters off the coast of Watch Hill, R.I., Dec. 7, 2015. The site was first discovered by local divers Charlie Buffum, Craig Harger, and Mike Fournier in August 2005. The 2015 survey was a cooperative effort between NHHC and Buffum and Harger. While NHHC provided survey equipment and archaeological expertise, the discoverers graciously donated their time, knowledge of local sea conditions, and use of their vessel and fuel to complete the survey. Revenge, a schooner commanded by Commodore Oliver Hazard Perry, ran aground on Jan. 9, 1811 in heavy fog. Buffum and Craig Harger discovered the possible Revenge wreck in August 2005. (U.S. Navy photo by Blair Atcheson/Released)

"It would be nice if we're eventually able to definitively identify the wreck site as that of Commodore Perry's Revenge; we stand to learn much about Sailors and the U.S. Navy of the 19th Century leading up to the War of 1812," said Schwarz. "But even if we can't make a definitive identification, I believe we'll still learn something new about the fledgling maritime nation America was in the early 19th Century."

The magnetometer data will complement side scan sonar data collected by NHHC, Naval Undersea Warfare Center Engineering and Diving Support Unit, and Woods Hole Oceanographic Institute in 2012, and provide a more comprehensive assessment of the wreck site. Based on the data recovered during the 2012 survey, the search area was expanded in order to locate ferrous remains that may lay beyond the immediate recorded site area. Remote-sensing data collected during the survey will be processed and analyzed by NHHC archaeologists, who will then be able to use geospatial software to interpret it alongside the 2012 side scan data. Analysis of these data sets will provide more information about the extent of the wreck site and possibly reveal the location of ferrous artifacts buried in the sand or obscured by the reef.

This remote-sensing survey was undertaken in advance of a 2016 return site visit to document and collect potentially diagnostic artifacts for study and public exhibit. If the wreck is identified as a sunken military craft, the site will be protected under the Sunken Military Craft Act and a management plan will be developed in coordination with the state historic preservation office, local authorities, and other regional stakeholders.

The Naval History and Heritage Command, located at the Washington Navy Yard, is responsible for the preservation, analysis, and dissemination of U.S. naval history and heritage. It provides the knowledge foundation for the Navy by maintaining historically relevant resources and products that reflect the Navy's unique and enduring contributions throughout our nation's history, and supports the Fleet by assisting with and delivering professional research, analysis, and interpretive services. NHHC is composed of many activities including the Navy Department Library, the Navy Operational Archives, the Navy art and artifact collections, underwater archeology, Navy histories, nine museums, USS Constitution repair facility and the historic ship Nautilus.